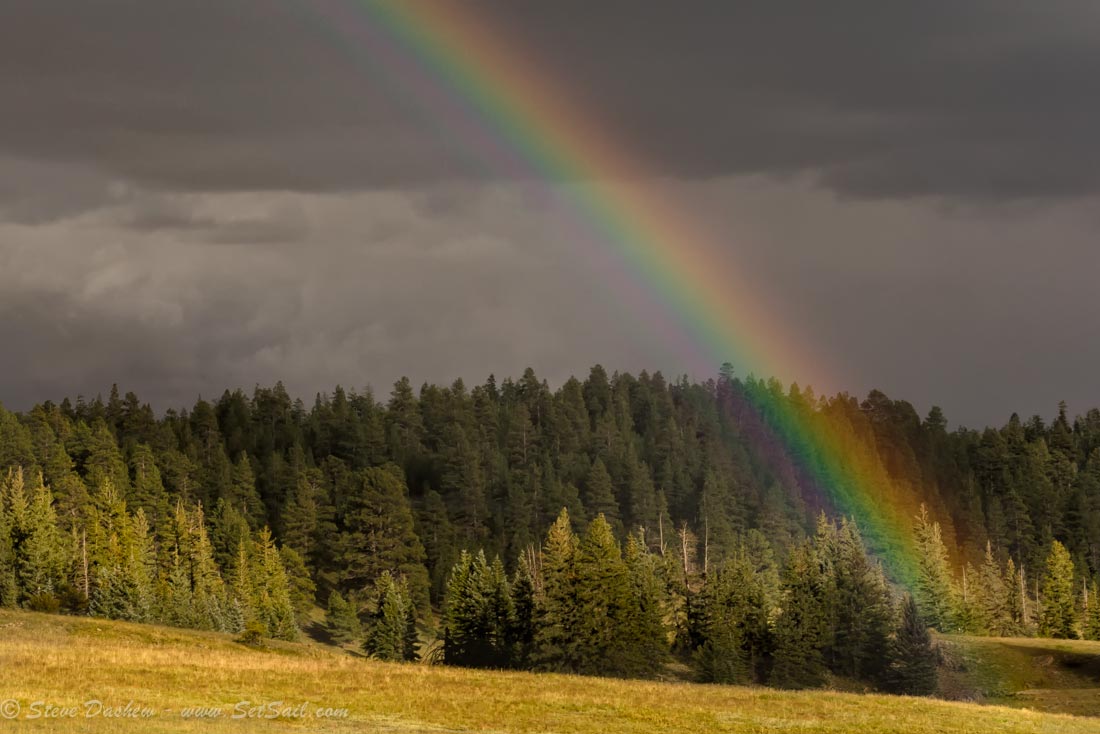 With the day-to-day pressure on the FPB 78 Series winding down we’ve had time to do some more camera testing. The goal is maximum quality for minimum hassle, with a high degree of portability.

We loaded up the four wheel drive Honda Pilot and meandered north. Although we had our Canon pro DSLR camera bodies just in case, the idea was to see if we could get the job done with the Sony Alpha 7A and 7R bodies. The lead photo is handheld, shooting from inside the car (raining outside), with the Sony/Zeiss 55mm F1.8 prime and a circular polarizer. 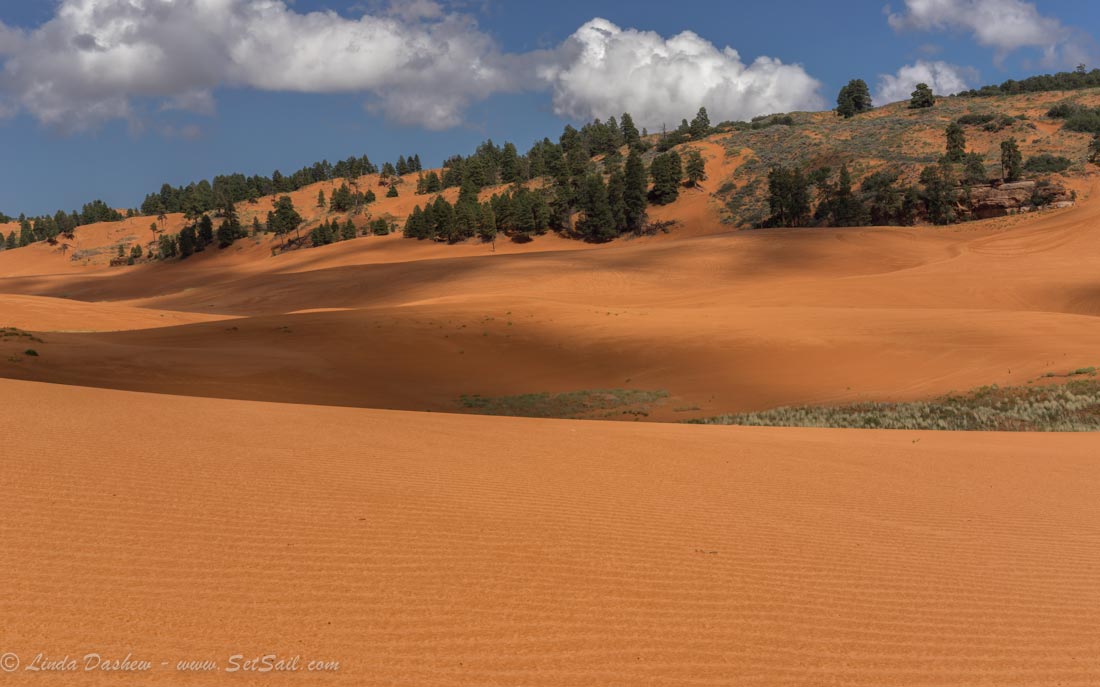 We find the camera controls simple to customize, and once set up a pleasure to use. The addition of RRS L-brackets makes the small camera body easy to maneuver if  you have  large hands. 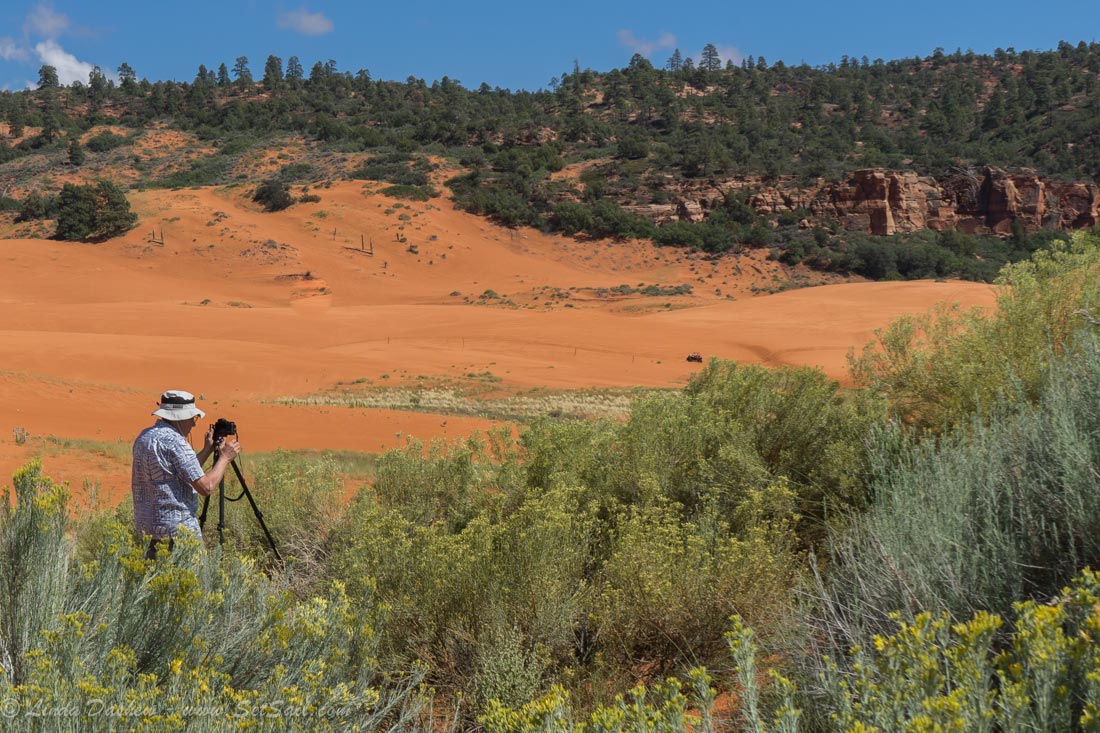 Linda has been shooting the 7A with the kit 24-70mm lens, mainly handheld. Steve is a tripod aficionado with remote release. The electronic view finder and/or back LCD screen are not as functional in bright light as a SLR looking though the lens. Precise placement of the center of focus and composition were impossible, even with a shading umbrella. 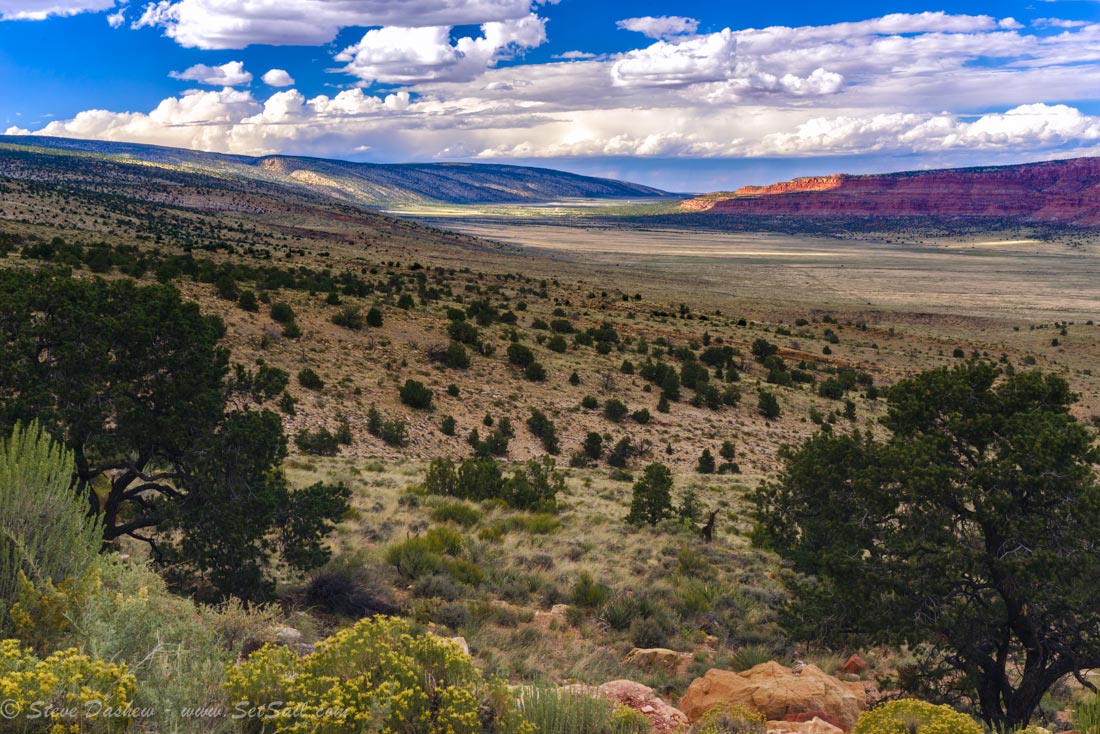 On the other hand the large files of the 7R, 36 megapixels, gives you a lot of leeway to crop later.

This is a 100% crop from the center of the preceding photo, using the 7R body and 55mm lens. We are looking at ground cover that is a long way off. 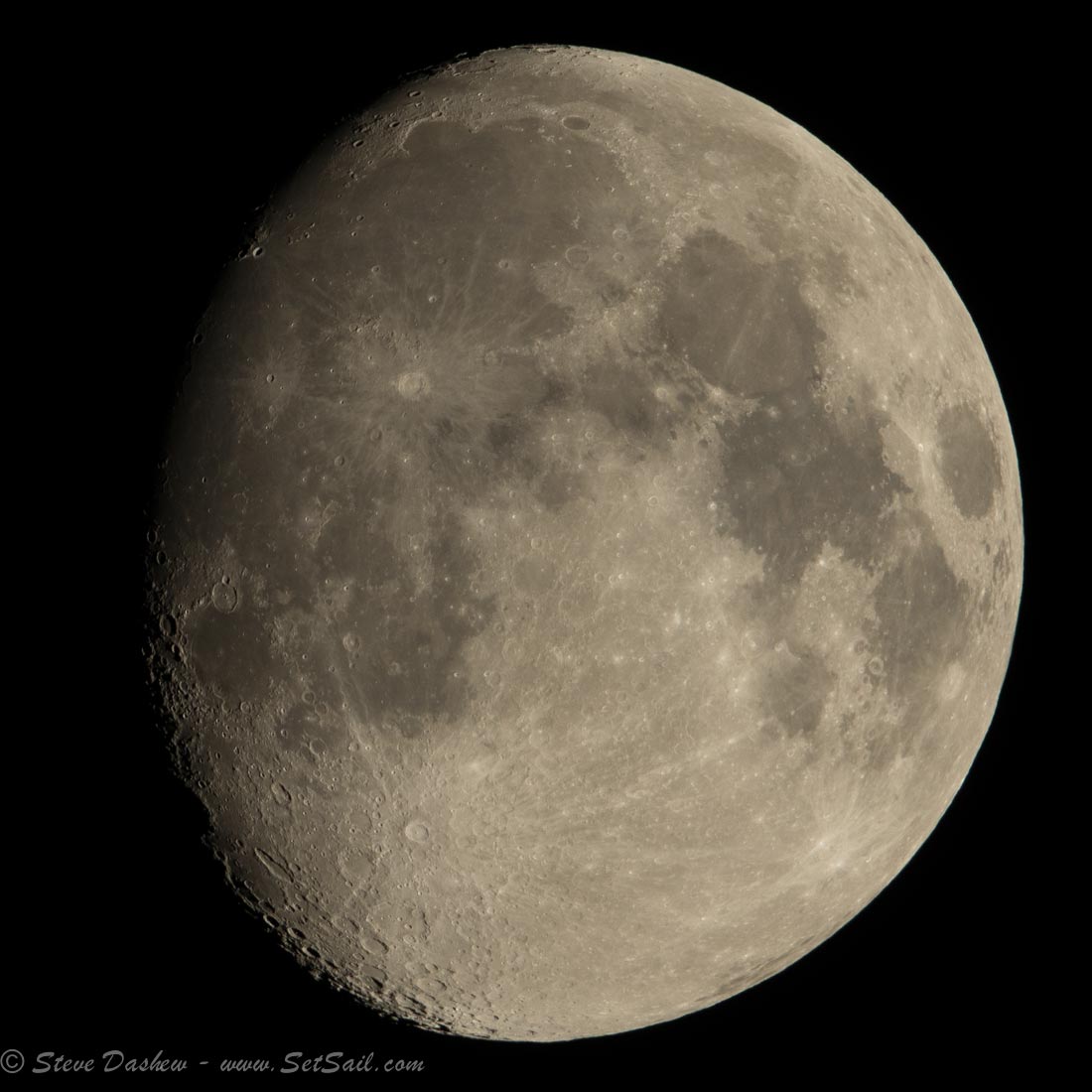 One of the knocks on the 7R is its noisy and vibration inducing shutter. This moon is taken with the 7R body on our Canon 600mm F4 with a doubler, so 1200mm.

A 100% crop. The key is a sturdy tripod, and a bit of extra ballast hanging from the center. We were at 8500 feet above sea level in cloudless weather. 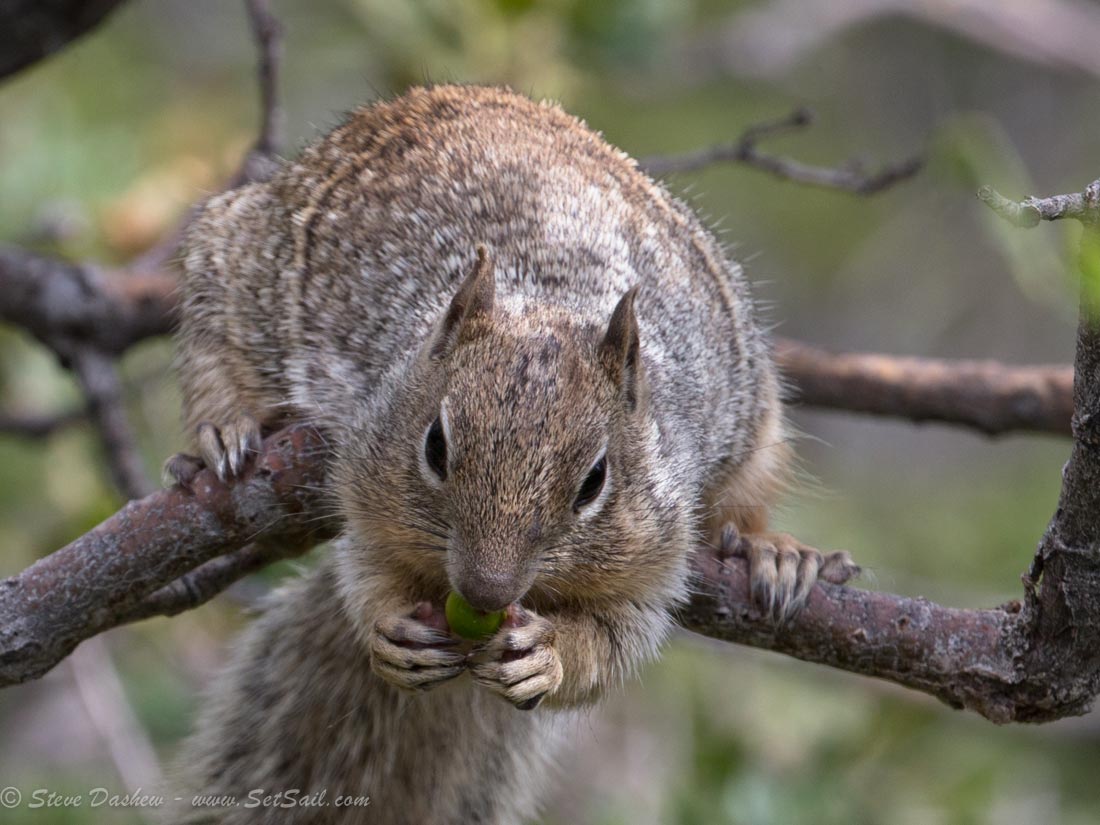 Although auto focus works with the Canon 600 F4, and other Canon lenses, it it not fast enough for moving targets. For this we need to keep the 1DX body handy, with the 200-400 X1.4 zoom. 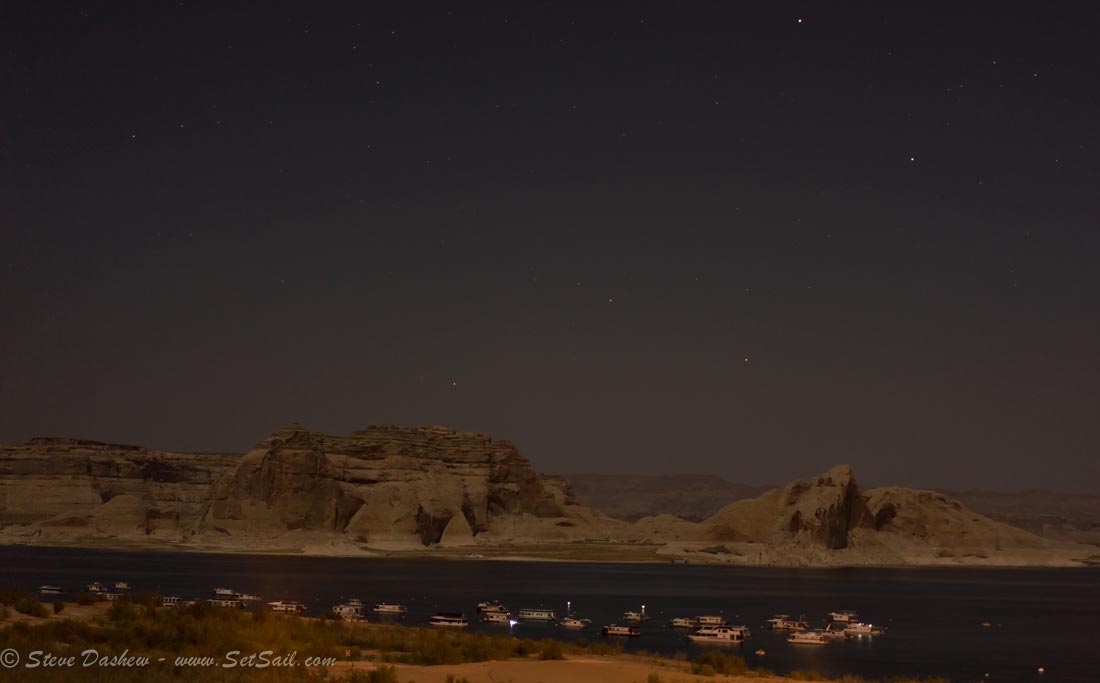 Another weakness of the 7R is long exposure, high ISO shots. This anchorage on Lake Powell is by the light of a setting almost-full moon. Even after processing there is a fair amount of noise. Above is from the 7R, ISO 3200, 55mm Zeiss at 1/3 second and  F1.8. 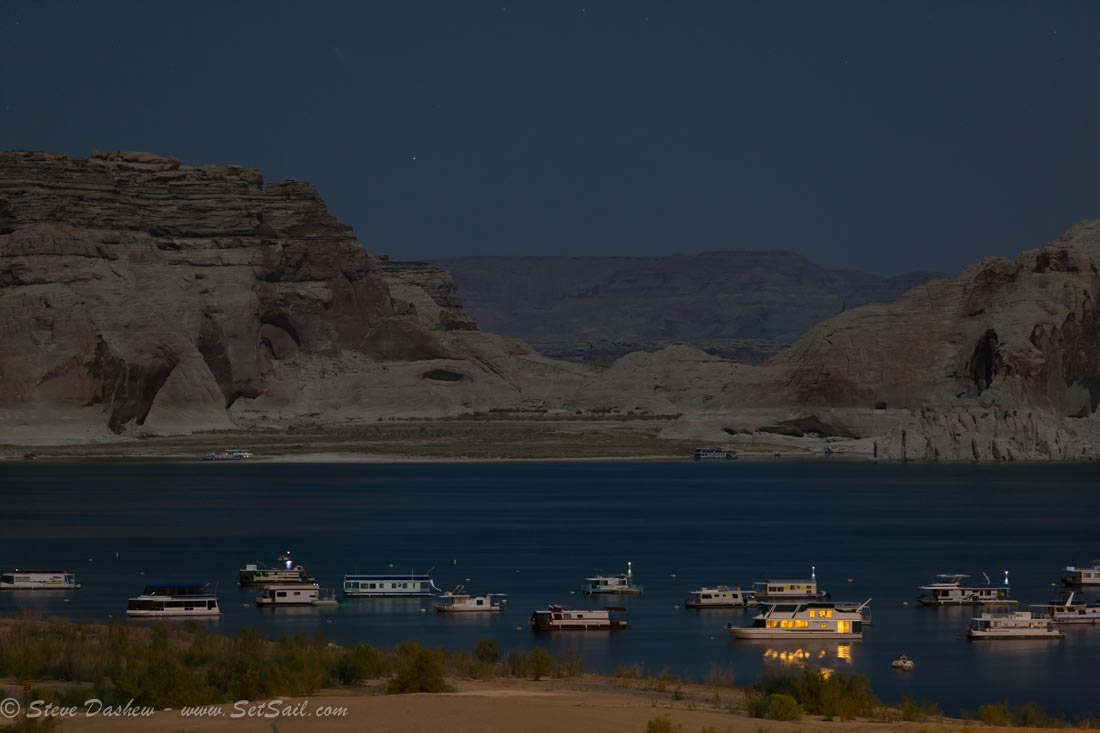 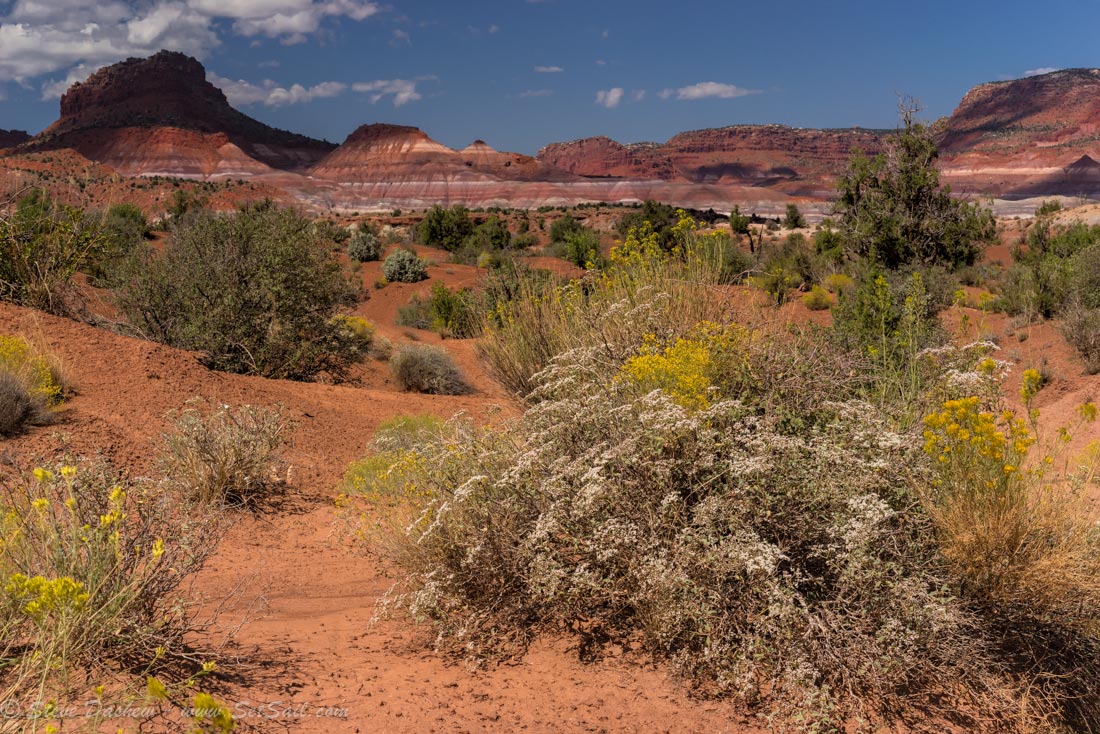 We both felt the Sony Alpha Series were superior to our Canon gear for landscapes. 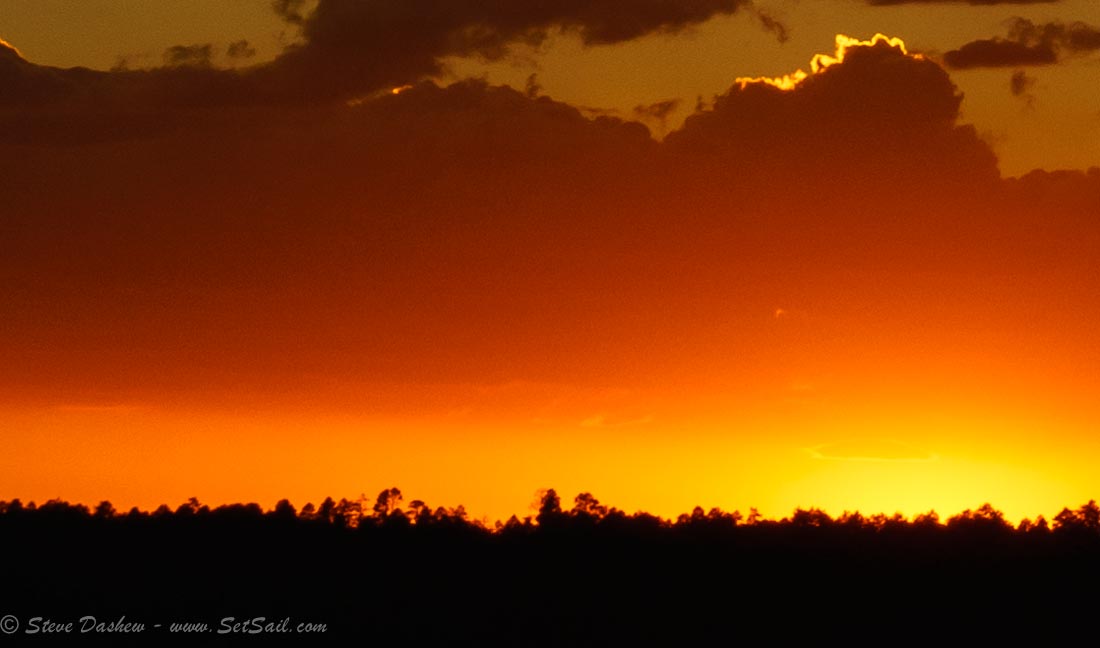 Here is a tough one. This is a 100% crop, 1100 pixels in width out of 7400, of a sunset at Angel Point on the North rim of the Grand Canyon, looking west. At this crop factor the 7R is showing a bit of noise. In this case we have not yet run the noise filter which will smooth things out. 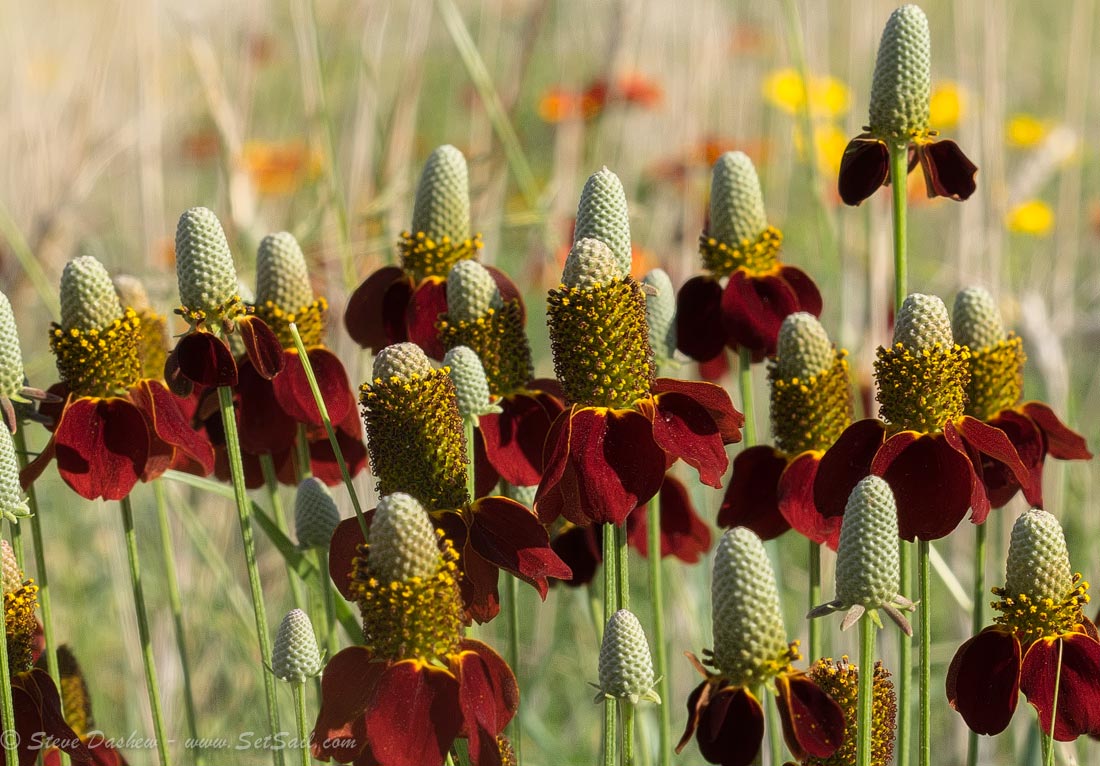 Driving south, we stopped to experiment with wildflowers. There was a bit of breeze and we could not catch a totally sharp rendition as the subject matter kept dancing. The above was taken with the 7R, 55mm F 1.8 Zeiss lens, at 1/25 of a second, F11, ISO 100. 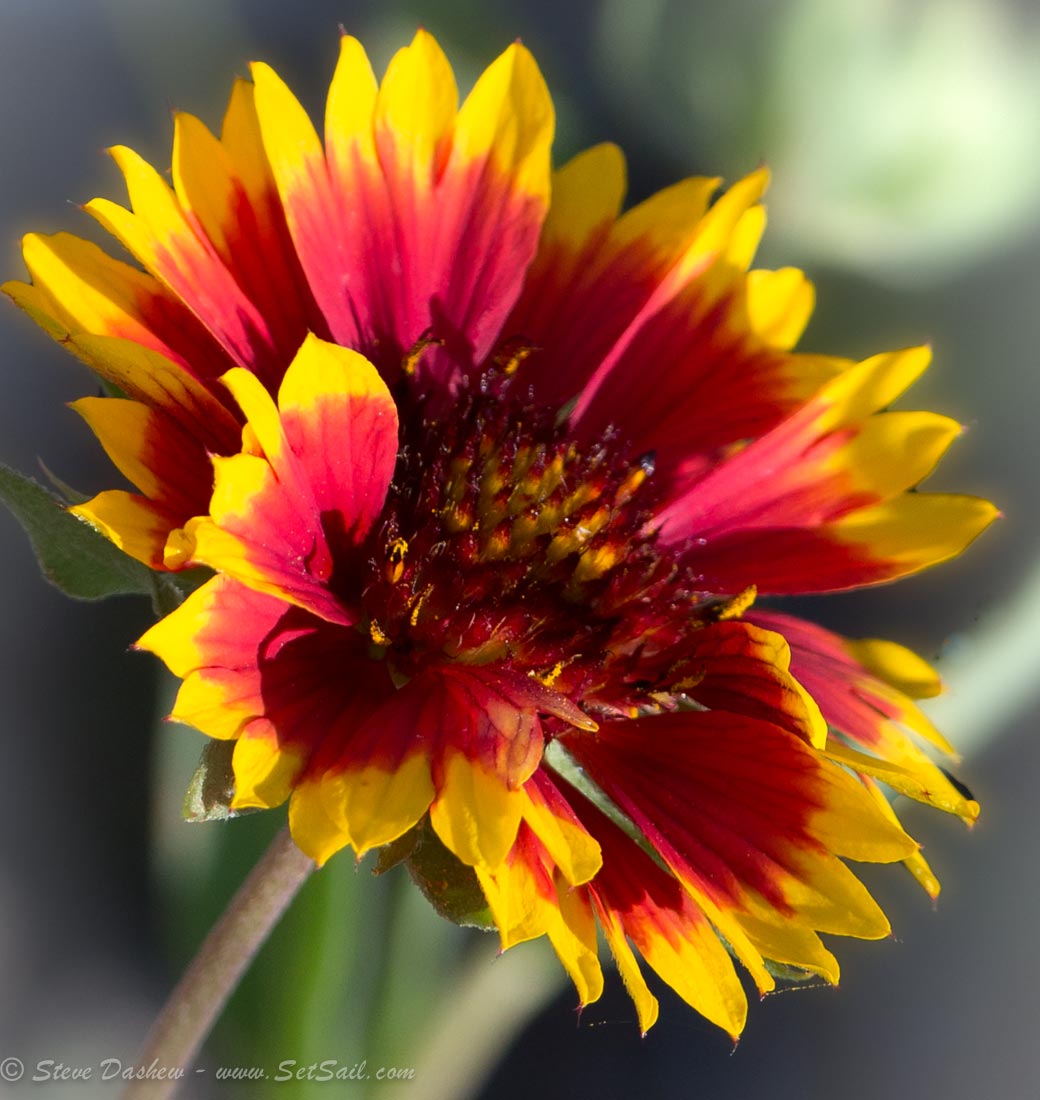 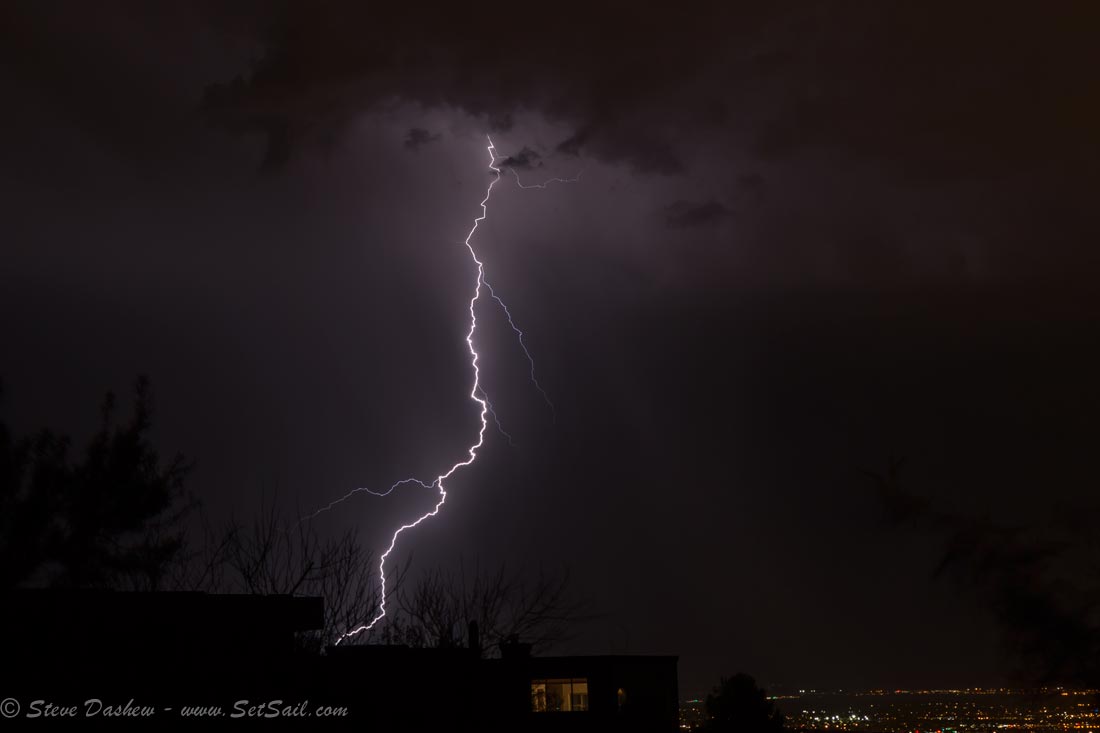 The shutter delay on the 7R does not lend itself to lightning photography, unless the shutter is left open in the evening. The shot above is a Canon 5D3, Canon 24-105 lens, ISO 200, F11, five seconds, triggered by a Steppingstone IV Lightning Trigger. 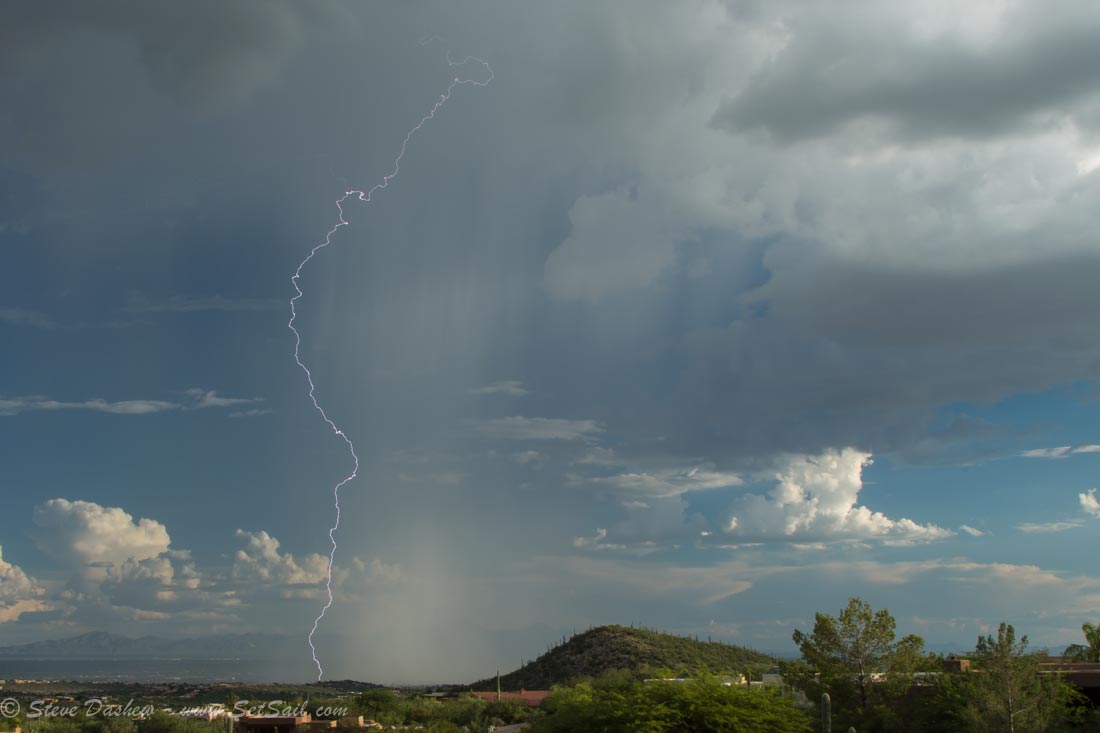 A daylight strike like this needs the faster reaction of the Canons. Same gear as above, ISO 50, polarizer, F22, 1/10 second. 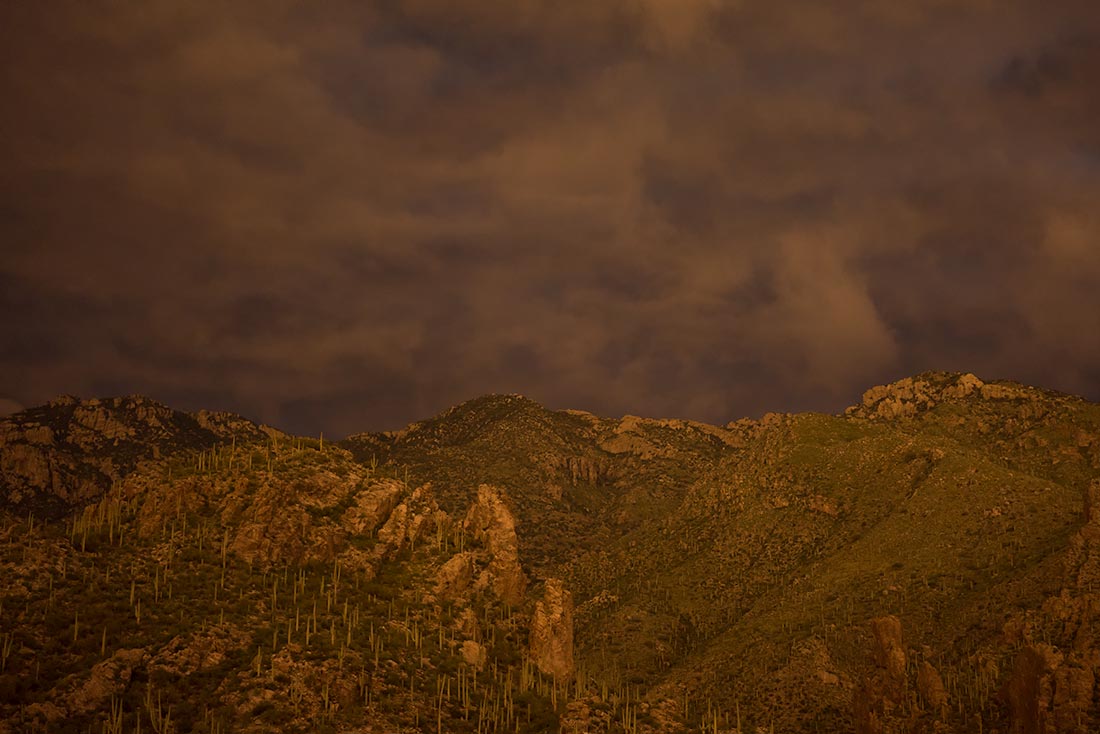 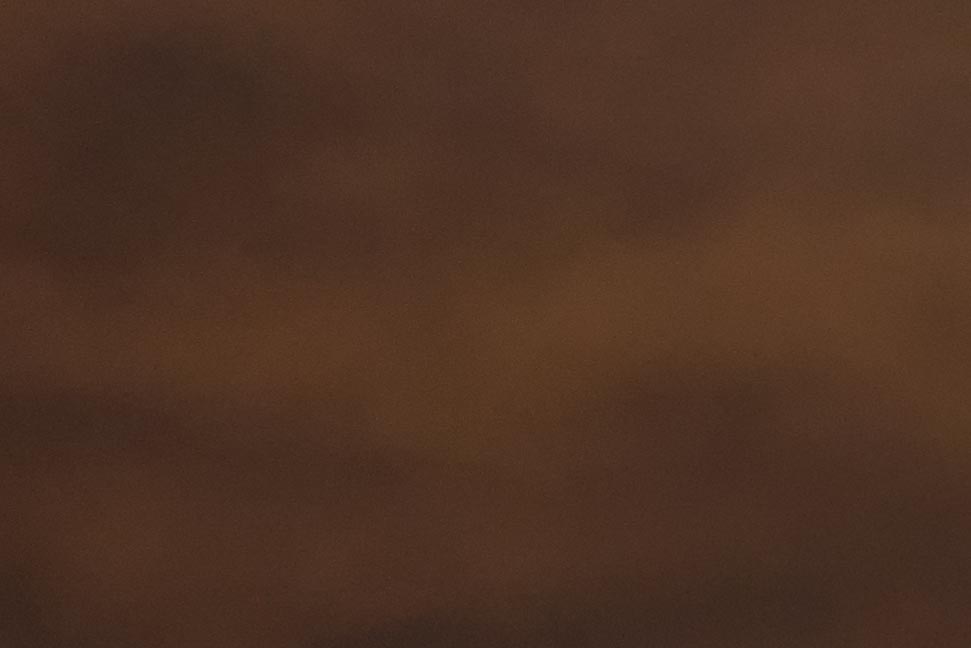 This is a 100% crop of the sky to give you an idea of the sky noise. Not too bad considering. 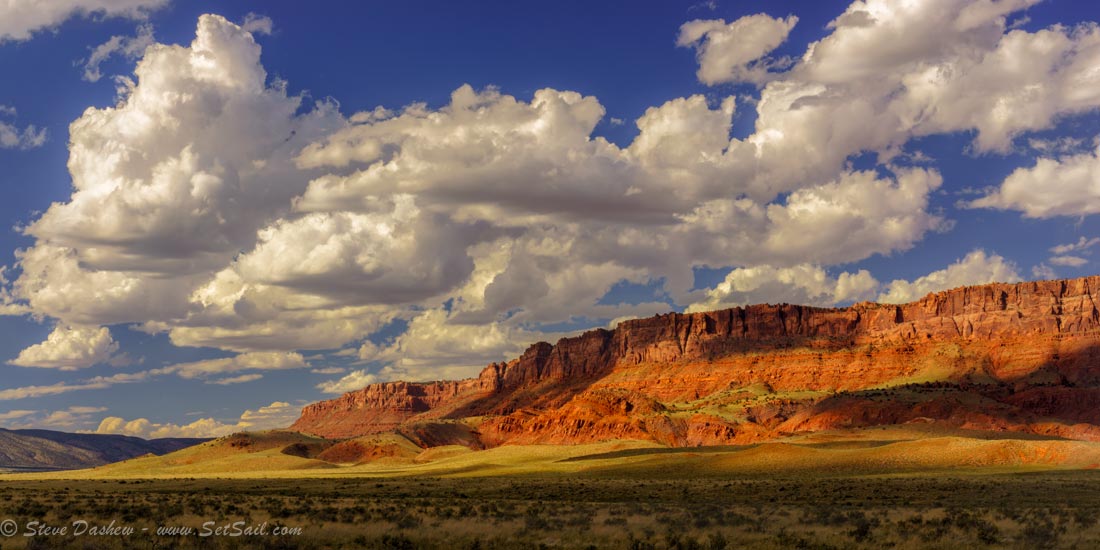 For landscapes, subjects that give you time to compose, and where there is a high dynamic range we think the Sony A7 and A7R hard to beat and certainly equal to the best of our pro SLR bodies. Throw in size, convenience, and cost and the equation improves. Deduct wildlife and sport photography and the Sony A7 series looks even better.

This entry was posted on Monday, September 22nd, 2014 at 8:32 am and is filed under Dashew Logs, four, The Logs. Both comments and pings are currently closed.