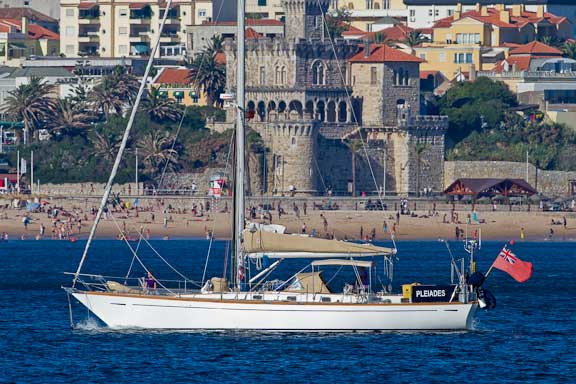 We had  heard all sorts of comments about  Portugal and its inhabitants. They were said to be morose, unapproachable, difficult with which to interact. This is definitely not the situation. From the moment you first meet the Marina Cascais crew, and are given a welcome bottle of Portuguese wine, to the last cab driver, we have found the locals to be friendly, eager to help and after a period of introduction, as interested in us as we are in them.

You have your choice of anchoring, or the Cascais Marina complex. 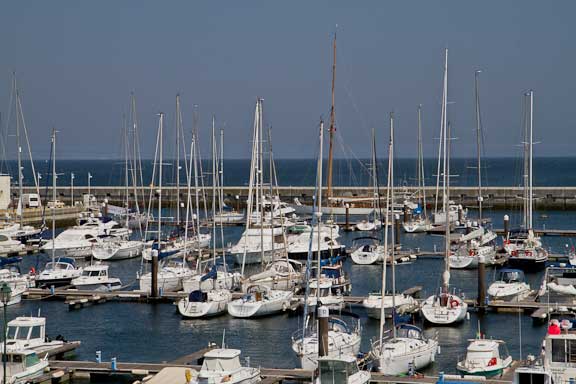 The marina itself is huge – 600+ slips – with all manner of interesting craft coming and going. Costs are on a par or less than resort areas in the U.S. during summer. 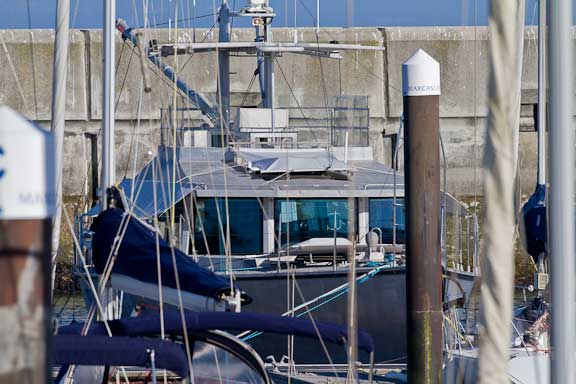 It is finally warm, in an Arizona context – mid 90s /35C some days – but there is a breeze to bring relief. Wind Horse is wearing her full awning kit, something she hasn’t had on in years. Side windows, foredeck, and even house top awnings are in place. With them between us and the sun air conditioning is not required as long as the wind is blowing. 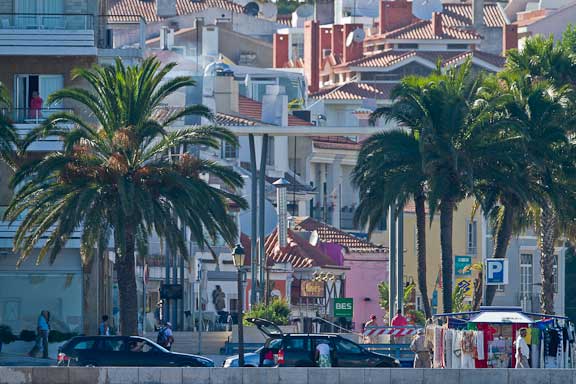 Cascais is a get away location for the nearby residents of Lisbon. The beaches and streets are filled with a mix of local and foreign tourists. Shopkeepers all speak English and a smattering of many other languages. 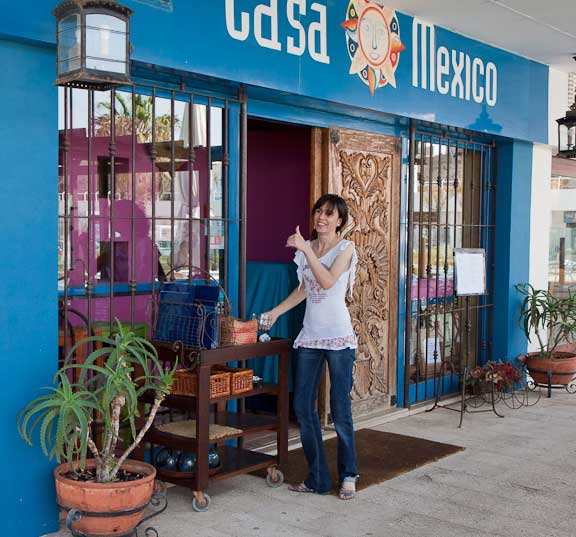 The marina area is surrounded with bars, restaurants, and retail shops, including this Mexican hang out. 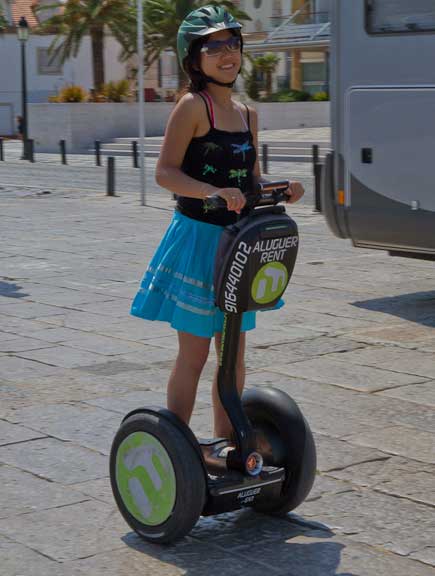 You can rent modern forms of transport. 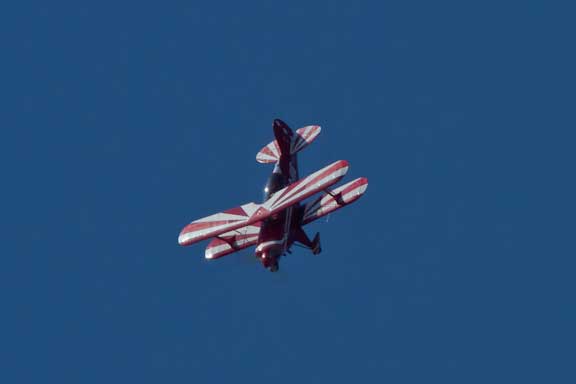 And pull G’s doing acro in a bi or mono-plane. 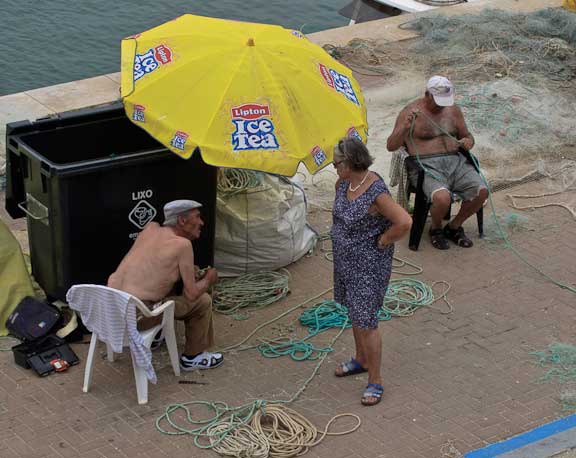 The fishermen and women are interspersed with the tourists. We are willing to bet this conversation has been going on for years. 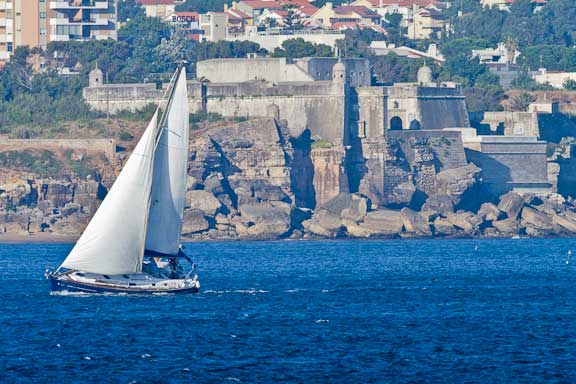 These folks are beating into the anchorage with a roller furled jib. Compare the shape of their sail to unfurled jib below. 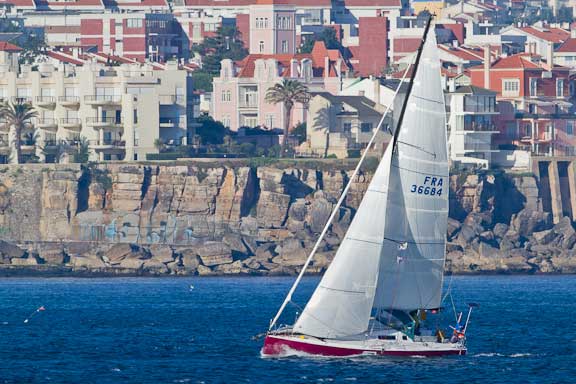 This is a very nice looking sailplan. High aspect ratio efficient jib, with what is probably a code zero, rolled here, for reaching. Of course they have the weight and windage of the rolled sail, but that can be dropped and stored. 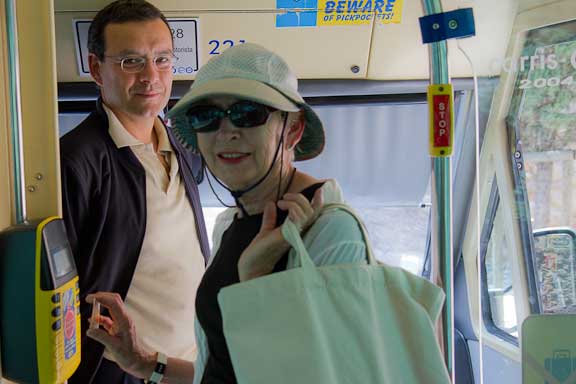 Back to the land. This area has wonderful public transport. You can purchase an inexpensive ticket which gets you onto the train to Lisbon, all the buses, and into many of the museums. Taxis are also reasonable. 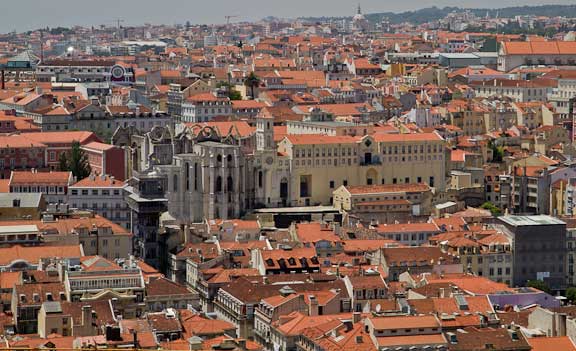 Lisbon is a big city, relatively modern by European standards, having been mostly destroyed by an earthquake and tidal wave during the 18th century. 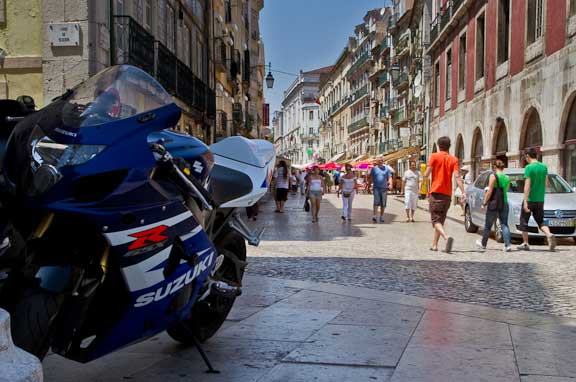 The streets are relatively wide, and lined with cafes and shops. 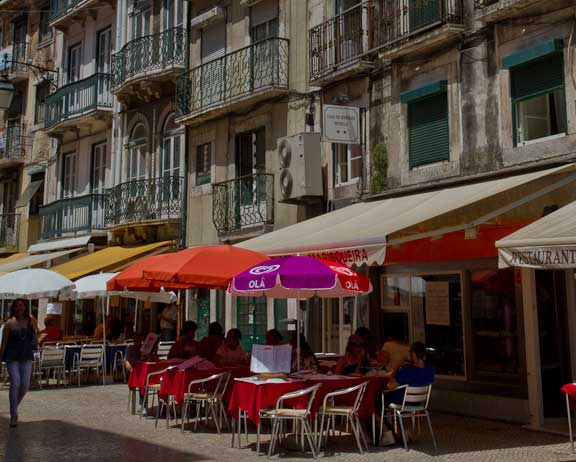 The city has a wonderful set of museums, from which we decided to concentrate on two. The first houses the largest collection of royal carriages in Europe – which  probably means the world. 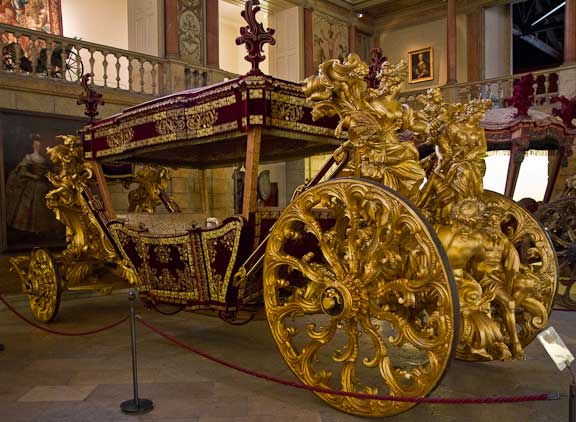 This is an amazing display of ostentation, from which we have chosen this 17th century “popemobile” as an example. 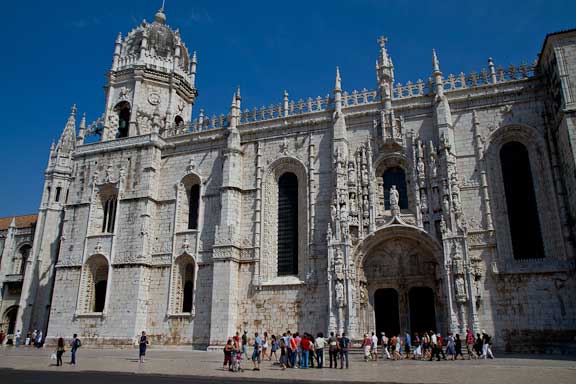 Then there is the Maritime Museum, housed in the west wing of this uniquely Portuguese styled former monastery, Mosteiro  dos Jeronimos. 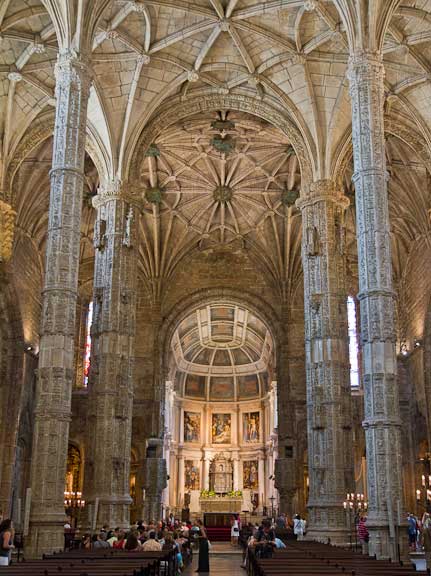 By now we’ve been in lots of big churches. This one is more open and less cluttered than the others, and so, for us, more appealing. This 16th century edifice is built in what is called the Manuelian style. 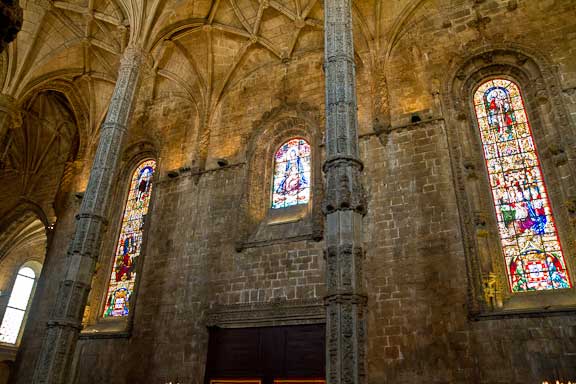 Vasco de Gama and his men prayed in the former, less grand edifice on this sight before departing on his voyage of discovery,which ended in India. 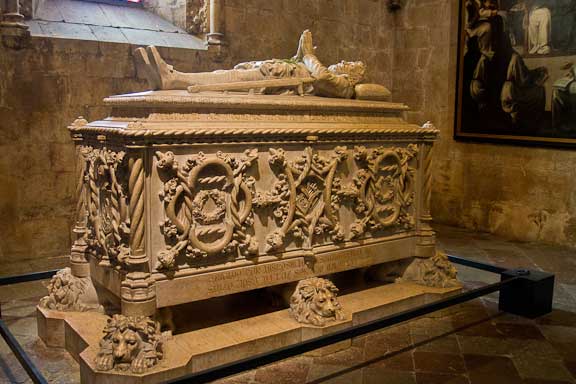 And now a pair of burials that some say get to the heart of the Portuguese soul. You have Vasco de Gama, and the favorite historical poet of Portugal, Luis de Caomoes, entombed at opposite sides of the entryway. 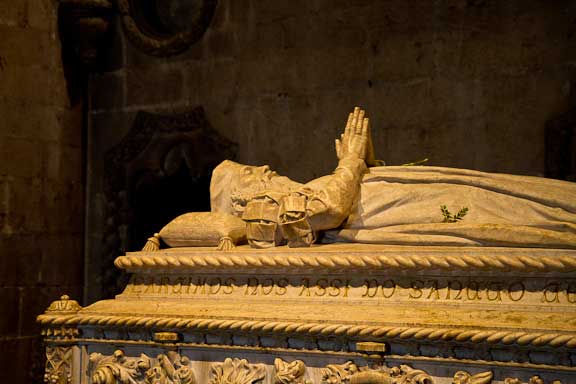 The plaques nearby indicate the pious unarmed gentleman above is the explorer while the poet carries the sword. 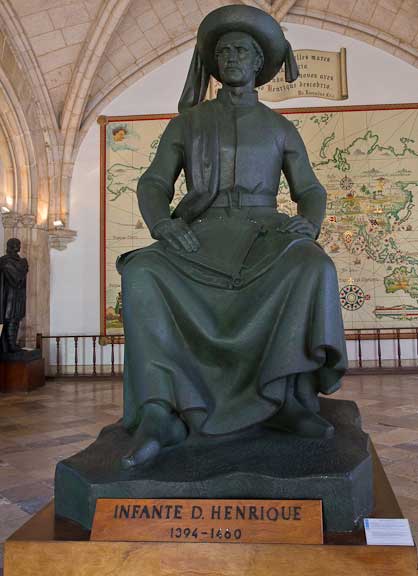 Which brings us to the maritime museum and the “Hall of Navigators” entry. Henry the Navigator is the Portuguese king who set in motion an amazing late fifteen century flurry of exploration, sits front and center, surrounded by half a dozen of the expedition navigators who found their way to India, South and North America, Greenland, and of course the first circumnavigation. 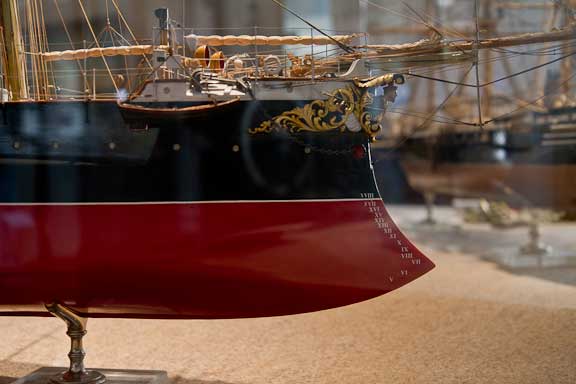 A couple of things caught our eye, the first of which is the bow on this late 19th century design. Certain mega-yacht builders have recently “invented” this shape, calling it an “axe” bow. 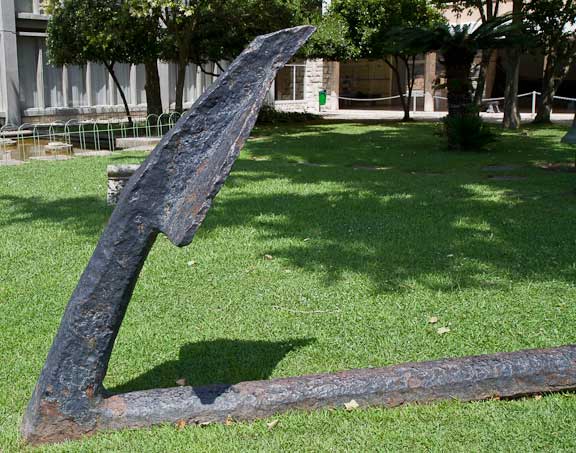 Then there is the Spade/Rocna/ Bruegel style of modern anchor, a riff on this 150 year old design. 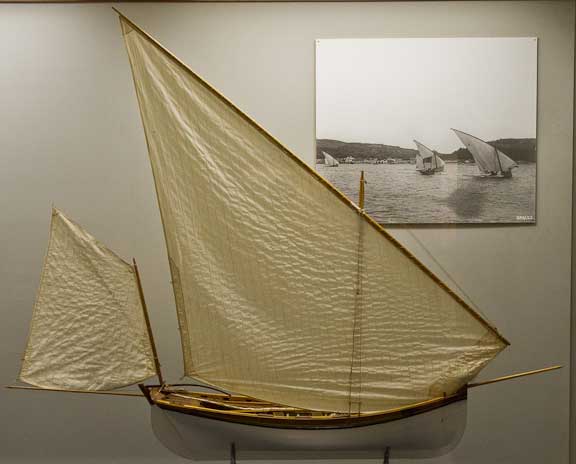 The museum is filled with models of course, and what really caught  our interest were these lateen rigs. Think about this design using carbon fiber spars and modern sail cloth. That is a lot of relatively efficient sail area. 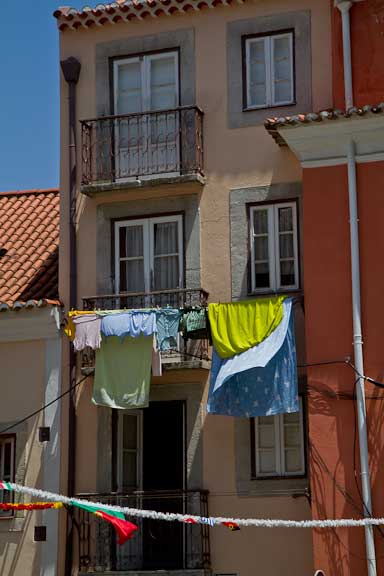 Tomorrow we are off to the Algarave coast of Portugal. For a high res slide show click here.

This entry was posted on Saturday, July 10th, 2010 at 10:42 am and is filed under Dashew Logs. Both comments and pings are currently closed.