Slicing through the barriers of what can and cannot be done with a large yacht, the Wicked FPB 97 redefines the cruising paradigm.

“Strength and purpose are written in every line and angle of their uncompromisingly assertive appearance.”
-Ivor Wilkins, Boat International

The first FPB 97 has now completed her first year of cruising. In the interim, we’ve put together a detailed look at the thinking behind this Wicked new FPB. For the latest construction/sea trial updates, click here. For recent features in Boat International, click here. If you could create the ultimate yacht for long distance voyaging, one suited to those wonderful cruising destinations like Tierra Del Fuego and French Polynesia, or experience the Arctic wonders at 79 degrees North in Svalbard, and do it comfortably in secure surroundings with minimum hassle, what would this entail? The Wicked FPB 97 is simply the most comfortable, secure, and efficient yacht that has ever been created for long distance voyaging, and she gives her owners the option of cruising with or without crew.

Able to withstand extreme conditions, with self-righting capability, it has the toughest structure ever offered in a series-built yacht.”
-Boat International

Interior Design Principles and the FPB 97

“…The concept deserves consideration from anyone who wants to cruise offshore over long distances.”
–Yachting Magazine

The FPB 97 combines a Great Room where you can live while running the vessel, the unique Matrix Deck which is a combination of penthouse and flying bridge, and a wonderful owners’ suite on the Accommodations Deck that is full width and 7.7m/25 ft long, in an interior that makes passages as inviting as sitting at anchor. The three interior decks are all positioned well aft, in the region of minimized motion, for the most comfortable sea-going experience.

There are a number of interior design principles at work throughout the FPB 97 that are key to successful cruising:

A major design innovation is revealed in the Matrix Deck, a seagoing union of fly bridge and penthouse. 360-degree views are combined with a layout that works equally well for watch keeping, lounging, or entertaining, within a space that can be both open to the outside or enclosed, heated, or air-conditioned. At sea, the lines of sight are excellent through 90% of your potential view field, and by moving a few feet you cover the other 10%. You are positioned in the zone of maximum comfort for head seas. When conning in difficult circumstances, you not only have good sight lines, but with some or all of the windows open you are in touch with the surroundings in a manner that cannot be duplicated inside. Couple this high degree of function with the ambiance of a lovely salon, or tropical lanai, and you have the truly unique experience that is the Matrix Deck.

The now-familiar battle-worthy look of the FPB yachts hides a beautifully crafted interior from the outside world. The Great Room concept has been a key ingredient of the FPB concept since the beginning. A combination of work, living, and watch standing center, the Great Room is one of the design features which makes short-handed cruising on the FPB 97 so enjoyable. These attributes pay dividends at anchor too. Regardless of what you are doing–preparing a meal, working at your desk on a web post, or relaxing with a book–everyone has the same wonderful views. 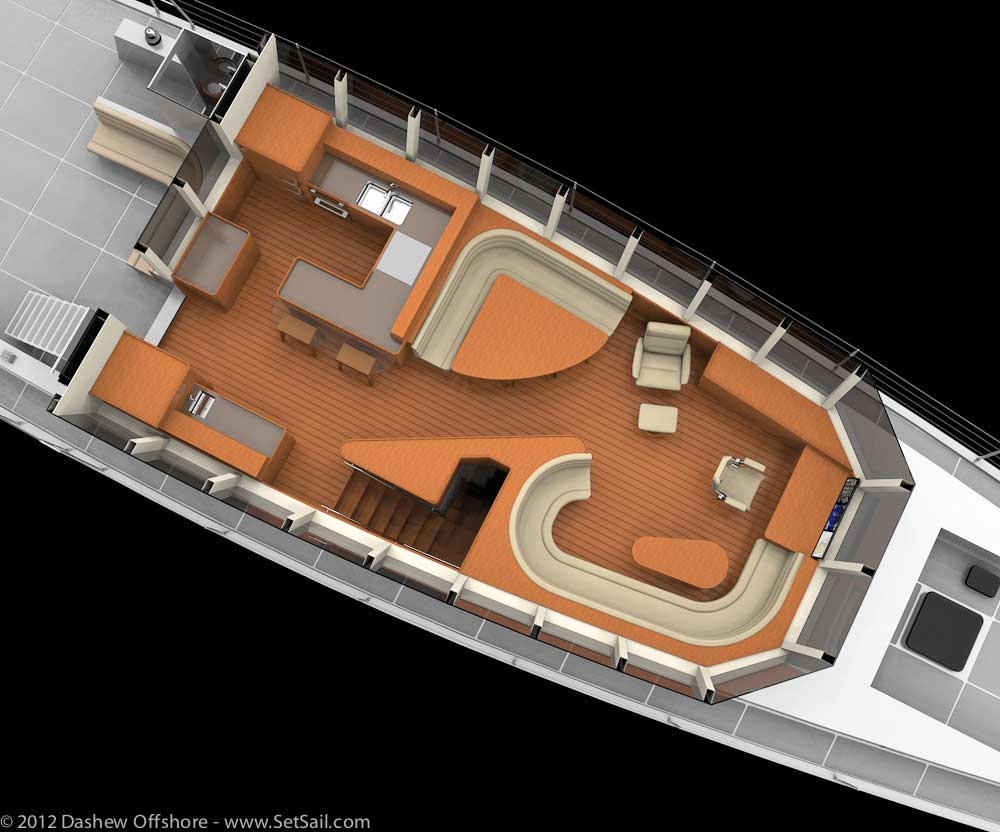 When standing watch on passage, you can see behind as well as ahead of you. And when the time comes for a meal or a snack, you maintain situational awareness. Standing in the galley you can see forward, abeam, and aft.

And if too much togetherness is not a benefit, then some of the crew can retire to the Matrix Deck, where the views are even more stunning. 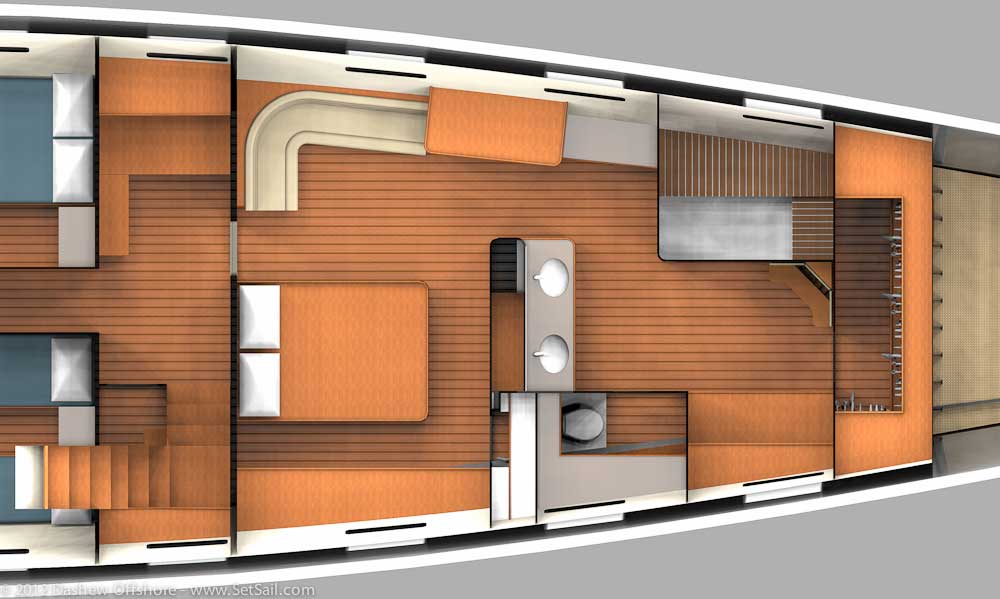 If you think the Matrix Deck and Great Room are cool, wait till you see the owners’ suite on the Accommodations Deck. Encompassing 25% of the hull’s length (7.7m/25 ft long) and spanning the full beam, the suite is positioned well aft for minimal motion. The head of the king sized walk-around bed is directly on the longitudinal center of the waterline. There are four large hull windows and several deck hatches that bring in copious amounts of natural light. Open-air ventilation from four silently powered vents keeps the air fresh and relatively cool until the point where air conditioning is warranted.

There is a full width walk-in closet, a large sofa, combination sauna/bath, and of course a TV which, when not in use, is hidden by a panel that can have a piece of art affixed.

All of this takes place within an open floor plan that has a lovely sense of spaciousness. With the engine room a full 25 feet/7.7 meters away and separated by two massive bulkheads, you know the only sound you will ever hear underway is the sea softly passing down the hull.

The foyer off the stairwell is an ideal location for an office, with desk space for a pair of large monitors, storage space and ship’s library.

The guest accommodations have generous heads attached ,each with a shower/bath, desk, and substantial storage.

The systems room, all the way aft, provides excellent storage, a pair of bunks for crew or overflow guests, with a wet head en suite. This area acts as a sound buffer, and what little machinery noise escapes the engine room will be substantially attenuated before it gets through the two sets of bulkheads between here and the guest sleeping cabins.

The recent capsize of the 60-meter yacht Yogi, in moderate gale conditions, has focused attention on the vulnerability of yachts that conform to the MCA Ly2 stability specifications. With a limit of positive stability at between 55 and 70 degrees, if they meet the wrong wave at the wrong time, or are disabled and lying abeam of the seas, the risk of permanent capsize is significant. Most smaller yachts do not even meet the MCA stability code requirements. The FPB 97, like all FPBs, is self-righting and has positive stability of at least 140 degrees, when correctly loaded. If you spend much time poking around with boats, eventually you are going to run aground, you will be hitting things, there will come a time when a rough commercial vessel drags anchor and bangs into your hull. The FPBs are designed for this life. They are tolerant of operator error. All of which leads to the peace of mind that gets you off the beaten path.There are several common structural factors to all of these yachts: 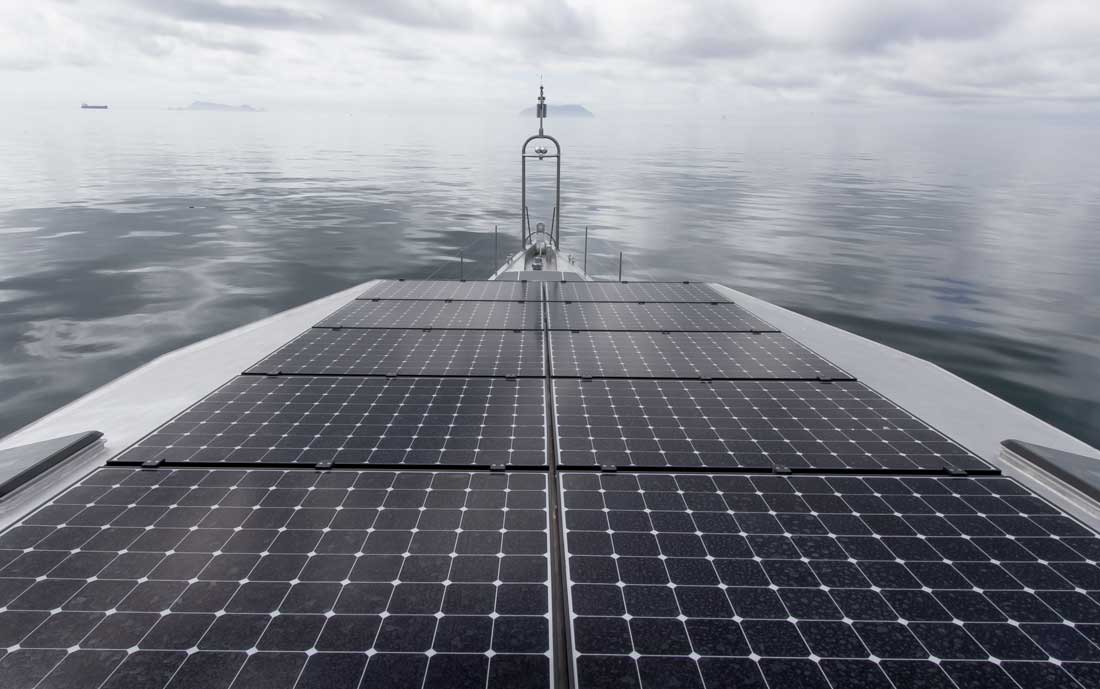 If you want to cruise to distant ports with complex, modern yachts, you are faced with a dilemma. Systems complexity, fuel burn, high maintenance demands, and crew requirements limit freedom of movement. This turns life afloat into a compromise between the owners’ cruising dreams, what the crew wants, and where service technicians can be found. With the FPB 97, owners have the option of going with or without crew. Combine this with enormous tankage, systems that allow you to be totally free of fossil fuel consumption at anchor, and huge storage capacity, and suddenly you have the ability to sustain yourself for long periods of time away from civilization. Simple, reliable systems with backups in place, an extensive list of spare parts and tools, plus a detailed vessel operations manual, and access to all critical systems for periodic inspection and maintenance, mean more time spent cruising, and the ability to deal with problems when they do occur. Add in a 5ft/1.5m draft, and the usual tough hull construction of the FPB, a double bottom and four watertight bulkheads, plus a functional, unpainted aluminum exterior, and the FPB 97 owners have the ability to cruise where they want, when they want, and with whom they want. It is an enticing formula. 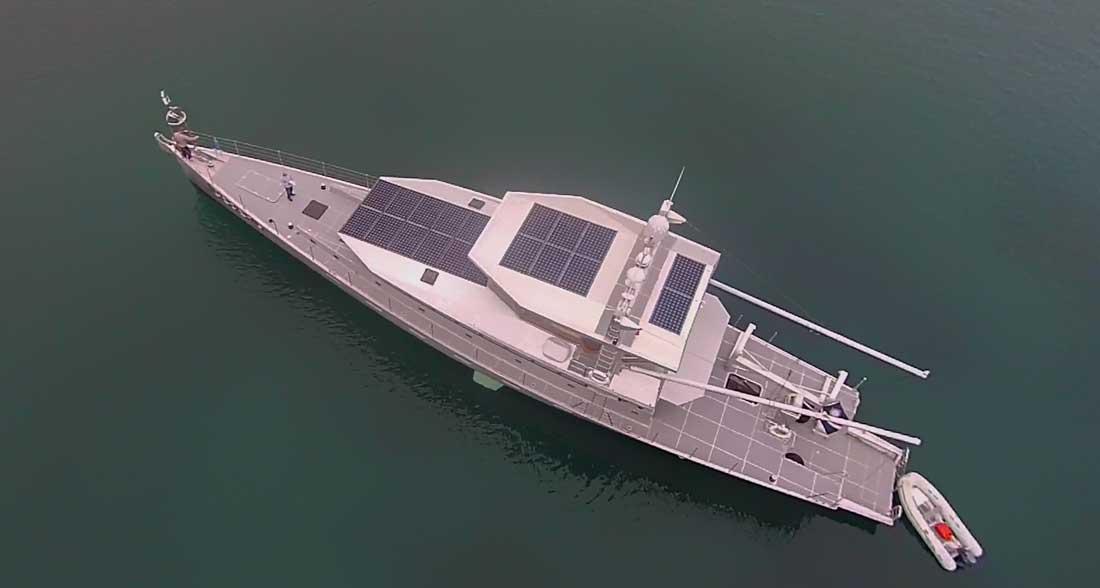 “This would have to be the most intriguing offshore cruising powerboat I have come across. Conceptually, Steve Dashew has possibly developed a new paradigm for offshore cruising…”
–Sea Spray Magazine To read all posts about the Wicked FPB 97, click here. If you would like to learn more about Dashew Offshore, the way we build yachts, and our history, see the links below. 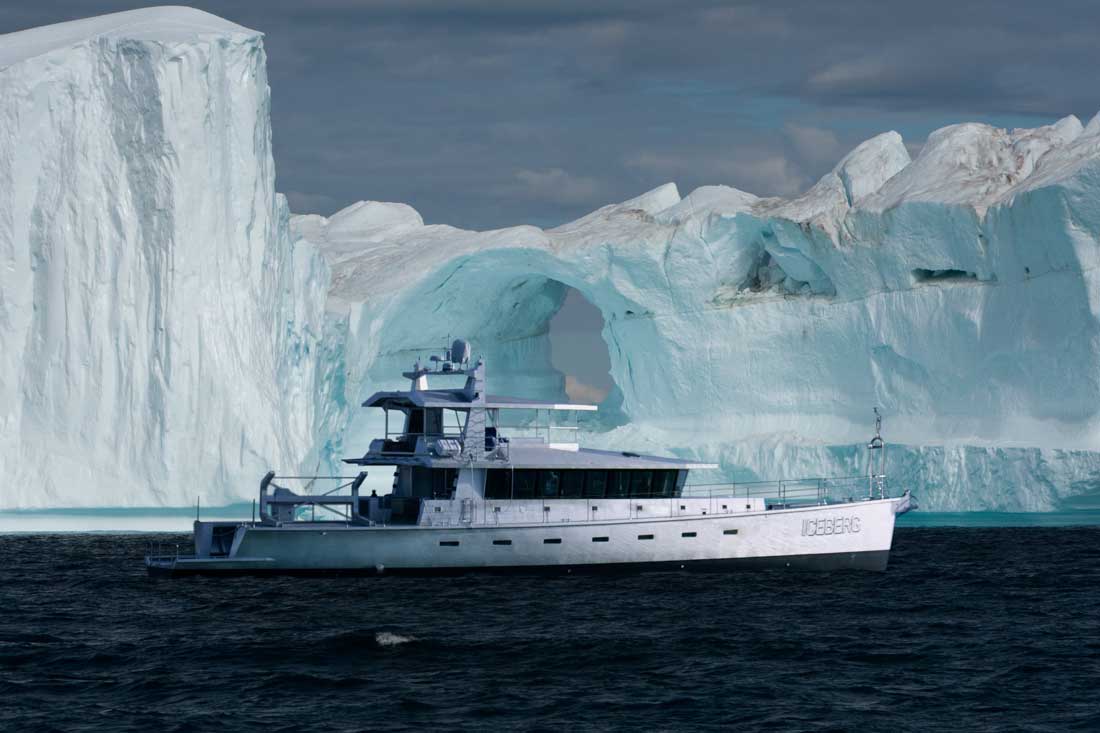 This entry was posted on Wednesday, July 15th, 2015 at 11:40 pm and is filed under two, Wicked FPB 97. Both comments and pings are currently closed.