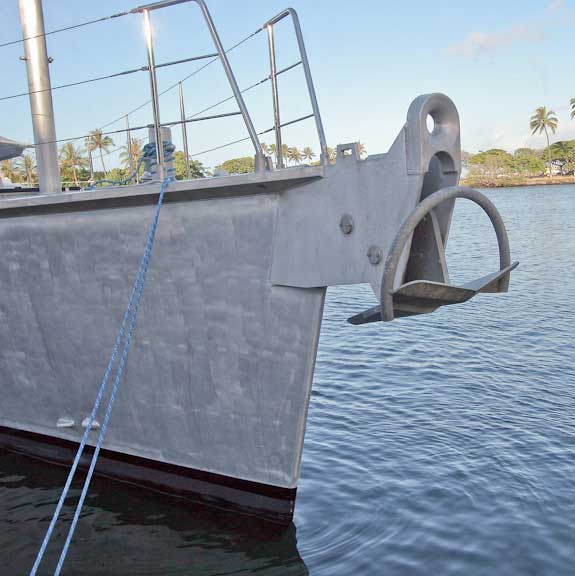 Nothing in yacht design and cruising evokes such discussion as anchors and their related gear.One anchor or two, chain or chain + rope, CQR, Danforth, or Rocna anchor type, electric or hydraulic power? We’ve fitted just about every combination you can imagine, and after 40 years of testing here is what we have learned.

There is no best anchor, but there are some pretty good all around choices. You can compensate in less than ideal conditions with a bigger hook. Having lived with Luke, CQR, Danforth, Fortress, Bruce, and now Rocna we are sold on the latter. It works well on short scope, in foul bottoms (both rock and weed), and is acceptable in soft mud.

When we started cruising we had two anchors on the bow, a CQR and Danforth.Maybe one out of 50 times we’d use two, and it was almost always a pain to retrieve them (often they would foul each other). One day the light went on. Why not put the weight of both anchors into a single hook? That way that extra weight would be working all the time. This flash occurred in 1978 in Papua New Guinea. Every boat since has had BIG primary anchors.

We do carry spares for use in kedging and if the main anchor were lost.

All serious cruisers use chain rodes. Yes they are heavy, but you do not have to worry about chafe. We have been using schedule seven heat treated chain for 25 plus years with good results. We find that 90% of the time we use no more than 200 feet/60m of rode. We normally fit about 330 feet (100m) of chain.

We also carry a spare rope rode, with 25 foot/8m chain leads for use with the spare anchors.

The windlass is not somewhere you want to skimp. Normal sized gear will work in good conditions, but what if it is blowing 50 knots and you need to get out of the anchorage in a hurry? Our suggestion is to go up one size from the conservative suggestion by the hardware manufacturer.

Then there is the question of electric or hydraulic. We have fitted both. Our preference is for electric as it is simpler and properly specified and installed tends to be more reliable. Electric also allows adjustment of the rode without turning on the diesel which supplies the hydraulic power.

Keep in mind that the chain stopper is an integral part of the anchoring system.

What happens if the windlass fails? We carry a spare motor and solenoid control (and supply these to clients) for such an eventuality. If the problem cannot be fixed? Then the electric deck winch comes into play dragging the chain down the deck.

The FPB 83 Wind Horse has extremely conservative anchoring gear. Anchor, chain, windlass, and bow roller design are based on many hundreds of thousands of miles of experience. In the last 45,000 miles we have only had three occurrences where we had difficulty setting (once in heavy weed, once in very soft mud, and once on a smooth granite bottom). We have never dragged after setting. Our gear is as follows:

The FPB 64 has less windage and is lighter but carries the same ground tackle package so it is even more conservative.

While this high spec gear is designed for adverse conditions it has one big advantage in every day use, you can anchor on much shorter scope. With Wind Horse 98% of the time we are on three to one scope or less. Probably half the time we anchor on two to one. This makes it possible to fit our rather long LOA into some very tight spaces. We often visit anchorages that yachts half our size would avoid.

All of the above sounds good in theory, but what sort of ultimate test results do we have to validate this approach?

Do you recall some years ago when Hurricane Ivan devastated the Caribbean Island of Grenada? This category four (or higher) hurricane wiped out hundreds of yachts at anchor, in marinas,and stored ashore. One of the few that survived was a Sundeer 64 ketch. She was at anchor, unattended, with the roller furling jib removed but the very bulky main and mizzen still on their booms.

This engineering test occurred just as we were mulling over the anchoring system for Wind Horse. Although the FPB 83 is a heavier, more longitudinally stable yacht, the windage is considerably less. This real world test gave us confidence to specify the same chain and chain stopper in the longer design.

If you want to read more about Hurricane Ivan here are two links to our archives. Ridding out Ivan at anchor. Interview with Sundeer 64 Owners after Ivan.

This entry was posted on Tuesday, January 12th, 2010 at 1:41 pm and is filed under FPB Series Notes. Both comments and pings are currently closed.