Antenna Allowances For The Modern Yacht – A Wicked Conundrum 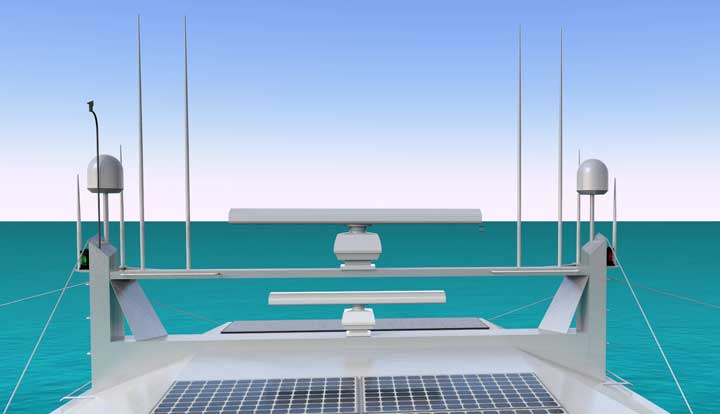 Growing up navigating by sextant and lead line taught us to appreciate modern electronics. We love radar, GPS, SONAR, and AIS. We are attached to free wifi, and data via cell service. What we don’t like is a hodge podge of antennae strewn here and there. So the farm – as in antenna farm – is on the design priority list during the concept phase, to make sure there is an orderly way to install them all.

There is the usual array of whips (2 VHF, AIS, Weather Fax, two wifi, and two cell). These are straightforward, but the lower radar provides an interesting challenge. If it directs its beam at the flat inner mast wall, that signal is going to reflect back, bounce all over the place, and create false echoes. Hence the stealth style angled plate. This is designed to reflect that energy outward and up, into an area where it won’t bounce back.

There has to be a system to get up here for maintenance and this is where the mast steps come into play.

In addition to these whips and radars, there needs to be space for GPS antennae, as well as perhaps a satellite compass and possibly Iridium or other sat com system. Most of these take a one-inch pipe thread. We’ll weld four of these stubs to the roof perimeter to facilitate their installation.

This entry was posted on Saturday, February 18th, 2012 at 7:40 am and is filed under Dashew Logs, FPB Series Notes, Wicked FPB 97. Both comments and pings are currently closed.