Crew Quarters – What Is The Best Layout – A Call For Input

We are in the process of designing crew quarters for our FPB 78. With no experience cruising and/or living with crew, we are working in a theoretical world rather than reality. If you are a professional crew, or an owner who has lived with crew, we’d love to hear from you.

There are a series of tradeoffs in any yacht design, many of which involve how the yacht is to be used. When crew is involved the design spiral becomes more difficult. How much space does the crew warrant and from whence does this space originate? Do you use some of the area devoted to the ship’s equipment storage, or is it better to cramp the crew?

With the FPB 78 Dream Machine we are thinking it may be possible to satisfy both vessel and crew. This is a function of starting out with sufficient storage in the first place. 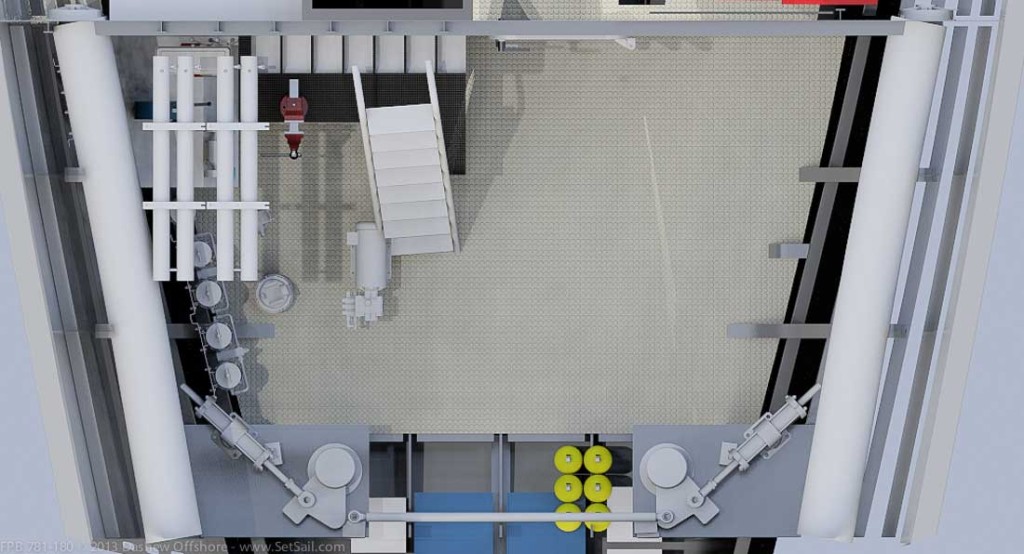 With the FPB 78 there is plenty of storage space for ship’s gear as well as “toys” in the lazarette aft, so that a large chunk of the forepeak could be used, if warranted, for crew. You can get an idea here of what is potentially available in the way of efficient storage space aft. 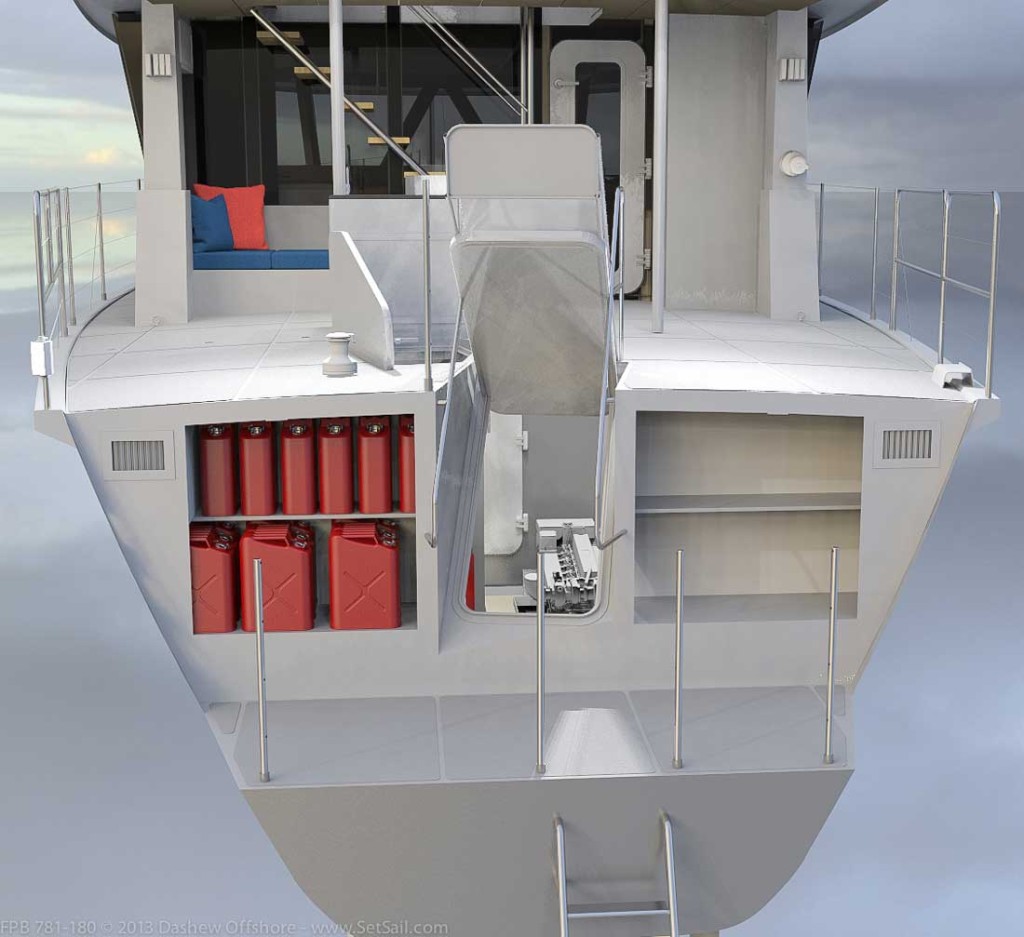 In addition to which we have these two large lockers accessible from the swim step. 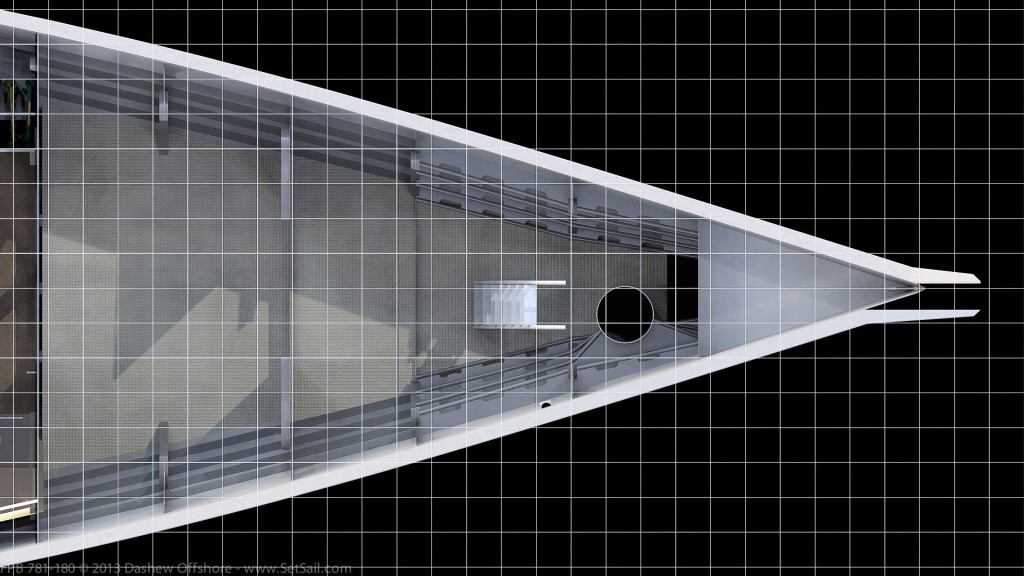 The plan view above has a 300mm/one foot grid superimposed. If you count aft two feet/600mm from the foot of the ladder, this is the position of the bulkhead on the FPB 64, relative to the chain locker. The column left, above the floorboards, is equal to an empty FPMB 64 forepeak. In other words, there is a fair amount of volume.

Let’s move on to our theoretical layout. 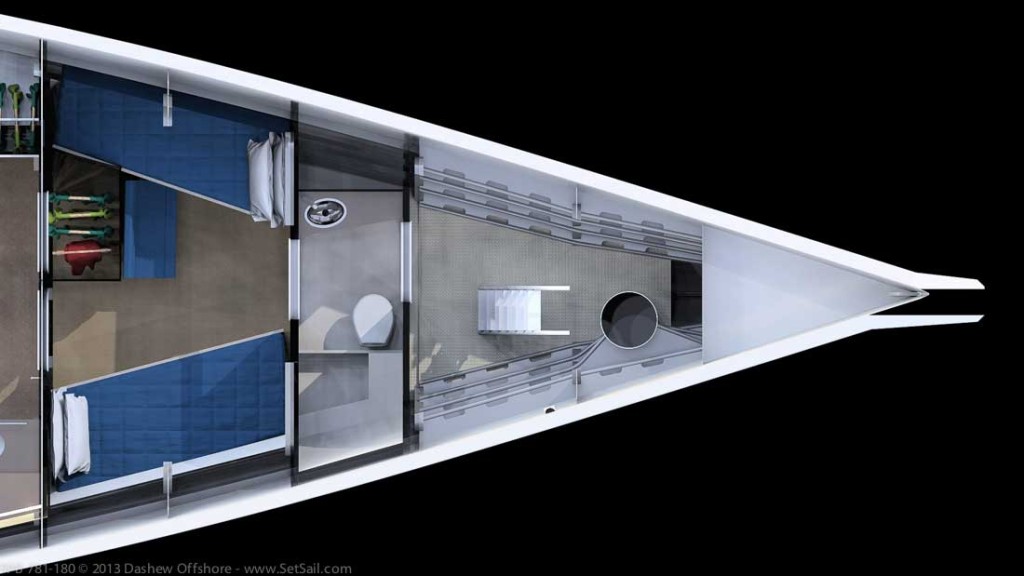 We are using the 3.2 meters (11 feet) forward of the owner’s quarters in this layout. The bunk to starboard is 90cm/three feet wide, 2m/6.5’ long, and 90cm/three feet off the sole. The port side bunk is 70cm/28” wide, and the aft 60cm/two feet outboard of the hanging locker punch out for the owner’s suite. This bunk is 1.15m/44” off the cabin sole. There is a settee, and lots of storage under the bunk. The head area has a dedicated shower (not a wet head), vanity, and toilet area. On the port side outboard are a pair of air conditioning compressors inside a locker. This locker is available for crew’s gear as well. The vanity would have a pair of drawers.

On deck there are hatches for the sleeping cabin and head. The foredeck hatch is 1.4m  long. There is also a Dorade vent for both spaces.

We’d love to get your feedback. Any and all suggestions are solicited. Everything is on the table except the watertight bulkhead location and the intrusion of the owner’s hanging locker. If you think more forepeak space is needed, let us know. If less works, let us know that as well.

PS:If you click here you will find a long post on the FPB 78. Towards the end there are a series of layouts we have or are considering, in addition to what is shown here.

This entry was posted on Tuesday, December 10th, 2013 at 1:26 pm and is filed under Dashew Logs, FPB 78, three. Both comments and pings are currently closed.