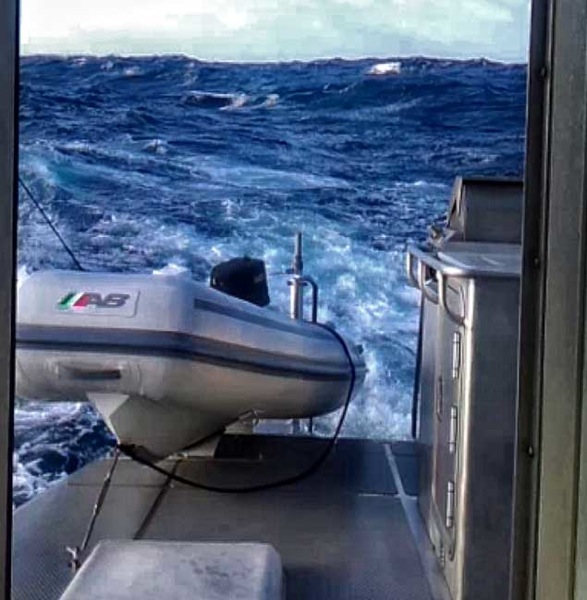 The passage from the tropical South Pacific island nation of Fiji, south to New Zealand, is one of the more difficult you will find. There is a high risk of heavy weather, sometimes extreme, that every year catches a few yachts. Obviously it is best to avoid this form of unpleasantness. The key is boat speed, understanding weather, and patience. But even the professionals occasionally get caught so it is advisable to be prepared.

This was the case last week with FPB 64-1 Avatar. During her passage to New Zealand she had two days of force eight gales on the nose, gusting force nine (35 to 40 knots gusting 49). As much as we’d have preferred for Avatar and crew to have an easier trip, these conditions generated exceptionally valuable data, as we shall shortly see

A note on the photos: these are screen captures of video, so not the best quality. However, they will give you a feel for conditions early in the blow, before it got interesting, so the seas are moderate by comparison to what came later . For what the rest looked like, we will have to use our collective imagination. 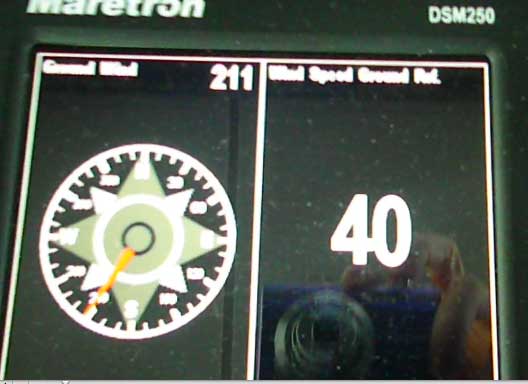 This passage is 1100 miles, with the weather systems often transitioning from the Southern Ocean, up the Australian east coast, to the Tasman Sea between Fiji and New Zealand. Tactics are simple. Wait until the leading edge of a high pressure system arrives, then head to New Zealand as fast as possible before the next front arrives.The trip up from New Zealand is much easier in that you are headed away from the weather. Typically by the third day (on our yachts) you are out of the high risk area and into the trade wind belt. Heading south, however, you, and the weather, are on a collision course, and the weather risks increase the further south you travel. 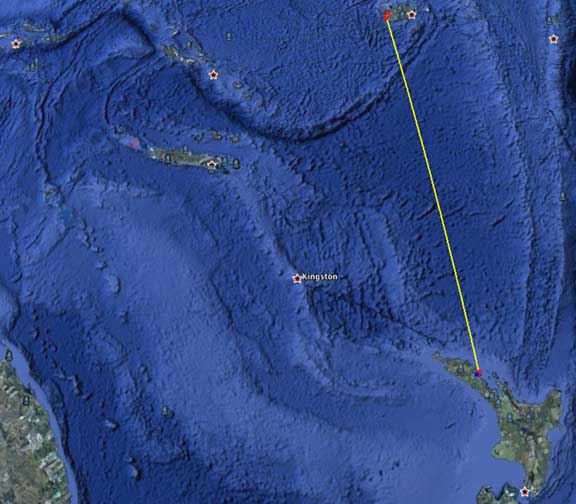 Two factors contributed to making this data gathering exercise a reality. First, Avatar was on a schedule, so rather than wait for a perfect scenario, she left with known, but manageable (for her and the crew) risk factors. The second was total reliance on the GRIB files (GFS model) for weather forecasting (GRIBS are raw computer output). 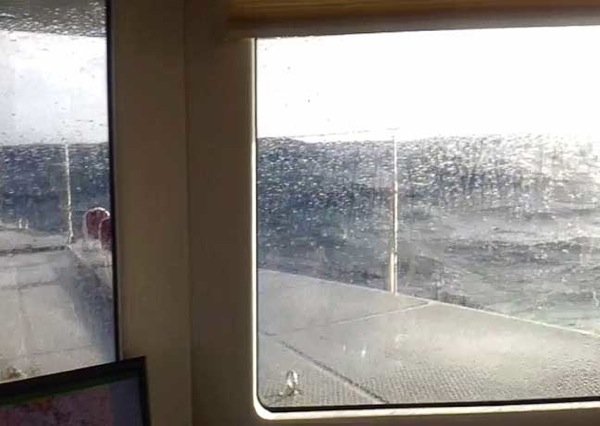 The data and photos which follow were kindly furnished by Avatar’s very experienced skipper, Nico Curbishley. 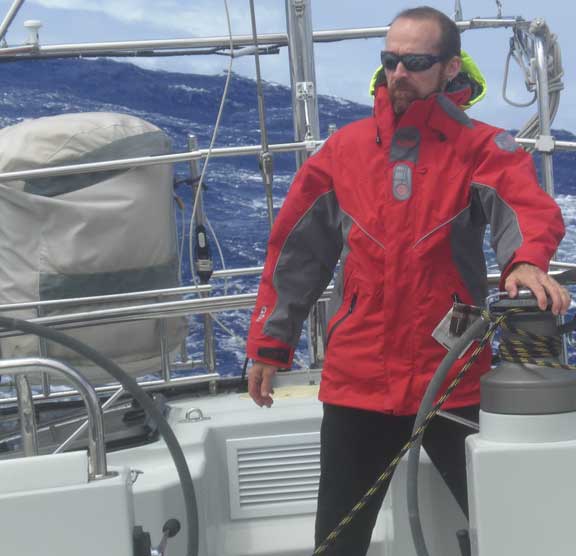 That’s Nico at the helm of another of our designs, the Sundeer 64 Raven, being being chased by a cyclone (note the overtaking sea rearing up astern) while sailing from New Zealand towards Panama.

Avatar departed with light winds that gradually built from the south. The first couple of days she had runs of 222 and 218 nautical miles ( 9.1 knot average) in 5 to 15 knots of breeze, as the GRIB files had forecast. Then the weather deteriorated. Instead of the 20/25 knots of southerlies that had been expected, the wind built to a steady 30 to 40 knots, gusting to 49 in squalls, and stayed that way for the next two + days. Between wind, 16 foot or larger seas, and the usual adverse current, daily runs dropped to 189, 191 and 181 miles (7.75 knots). Our own experience in this part of the world is that heading south you lose 10 to 15 miles a day to current, so Avatar was probably cruising at closer to 8.5 knots through the water during the higher winds.

In the early phase of the gale the new waves were quite closely spaced, the worst sea state for the FPB 64 without the stern extension. The crew backed off the speed a touch and brought the bow off five degrees. The wind waves were from the south, on the nose and there was a crossing swell on the bow quarter, which created a particularly uncomfortable confused wave pattern.  After the second day – with bigger seas – now averaging five meters/16 feet – Avatar resumed speed heading directly into the waves. 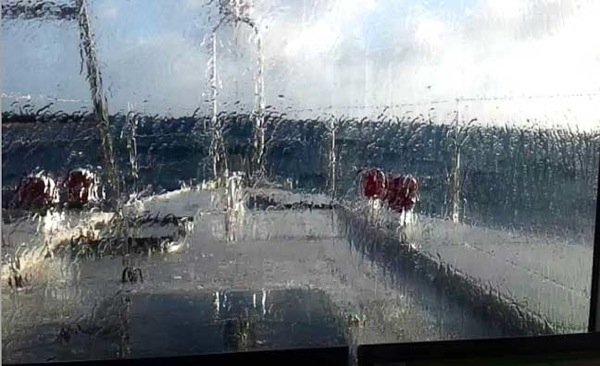 During the gale there were three large wave impacts which caused estimated fifteen degree rolls. The boat came quickly back to upright without going into a roll to windward. In other words the stabilizers did not overcorrect. The NAIAD system was in “active” mode with settings of: Angle 40%, velocity 70%, and acceleration 20%.

With big seas and a crossing swell we were interested to find out how the steering worked, and if the “bite” of the bow was sufficient to resist wandering during wave impact from the side. The report was: “No steering issues, the boat just kept marching on.”  Autopilot settings were: Gain-2, Yaw-1, Counter Rudder-0.

The final question for us was how the hull reacted to the waves in terms of pitching and lift. The comment was “There was no problem with burying the bow. It lifted with the bigger waves. With the larger bow quarter waves the crests would occasionally shear off on deck, leaving 30 cm ( one foot) of water behind for a few seconds. The bow would drop as it pushed through the crests, but never banged.”

Now some interesting interpolation. For the sake of this discussion let us assume the average through the water speed was 8.7 knots (allowing half a knot of adverse current). The hourly burn rate on fuel was 19L/hour or 5.50 GPH. Fuel burn includes hydraulic loads for the stabilizers, induced drag off the stabilizer fins, and electrical power generation.The engine CPU was reporting engine loading of 46 to 50% of available power in the heaviest winds, with 60% load as the FPB64 smacked into the occasional larger than normal crest. 5.5 gallons per hour equates to roughly 104 horsepower being produced by the John Deere 6068TFM 50. At 1750 RPM this engine is capable of delivering close to 200HP at the crankshaft, so even in these less than ideal conditions there  is close to a 100% power reserve.

As air conditioning was being run for the first three days of the trip it is safe to assume that at least half a US gallon of the fuel burn was devoted to these extra loads, so let’s say a net of five GPH for propulsion.

There are several lessons for us in this passage:

If these weather patterns are of interest you will f ind extensive reference to this part of the world in Mariner’s Weather Handbook and Surviving the Storm.

This includes detailed analysis of the Queen’s Birthday Storm and the 1998 Sydney Hobart race.

This entry was posted on Thursday, October 27th, 2011 at 7:00 pm and is filed under FPB Series Notes, Most Popular. Both comments and pings are currently closed.