We hate to waste displacement on sloppy interior construction, poorly thought out systems, or excess structure up high, where it does nothing to help us. But from the deck edge down we want all the impact resistance and factors of safety we can get.

As we are getting ready to submit the FPB 78 structural plans for approval, we thought a few details might be of interest. We will start with hull plating. If we were building strictly to the Lloyds Special Service Rule – considered very conservative – we would be using a fraction of the framing and plating that you see in these sketches. And we’d be able to deal with almost anything the ocean dishes up. But our concerns are with floating objects – trees, containers, other vessels, ice, and harder things like rocks on which we will inevitably land.

The 12mm/1/2″ nominal bottom plate is in itself excessive. However, we have beefed this up to 16mm/5/8″ in the turn of the bilge where a grounded yacht typically sits. This is added insurance for that inevitable one pointed granite rock on the otherwise soft beach or mud flat. This 16mm plate is carried aft under the engines, props and skegs, to add an additional hedge against structure born noise or vibration.

The very bottom, what we call a grounding flat, is 24mm/1″ thick. 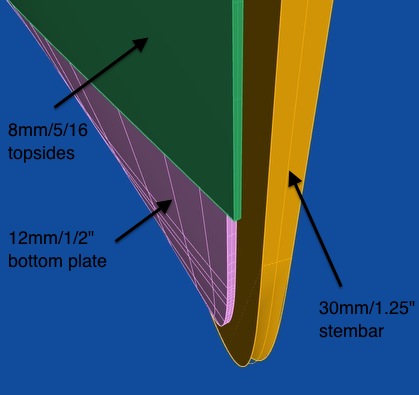 In the bow, the 12mm bottom and 8mm topsides, come together with a 30mm/1.25″ stem bar. The stem bar itself projects forward of the welded plate intersection an additional 37/1.5″, in a blunt battering ram. Just the thing for recalcitrant sea ice or contumacious logs. The projection protects the topside plate edge weld bead, and will have an appealing aesthetic, especially in more refined circles. 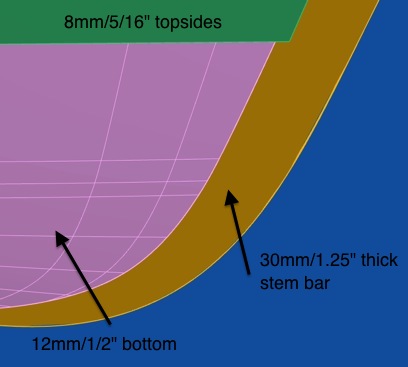 The bottom plate comes well above the waterline, between 250 and 400mm (10″ to 16″) depending on displacement and trim. All of this costs weight and money. The weight we can afford because it is low, and has been included in our displacement allowances from the beginning. The fiscal impact is offset by the emotional security it brings – we very much like the idea of the factors of safety attached hereto. And maybe we’ll get some of it back in the form of lower insurance premiums. 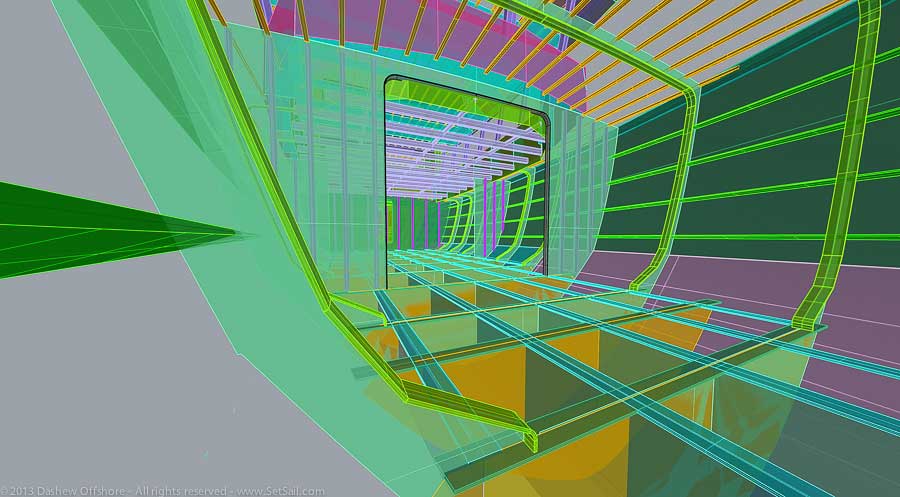 Over the years we have used a variety of framing layouts. The FPB 64 is a longitudinal system. Beowulf was just the opposite, a transverse frame dominated scheme, as was FPB 83 Wind Horse. Both the FPB 97 and the FPB 78 use a hybrid, with a combination of dominant structure in both directions. In the screen shot above you can get a feel for what is going on with the framing. There are deep frames every 1100mm/44″, with topside stiffeners running the length of the boat at varying intervals. 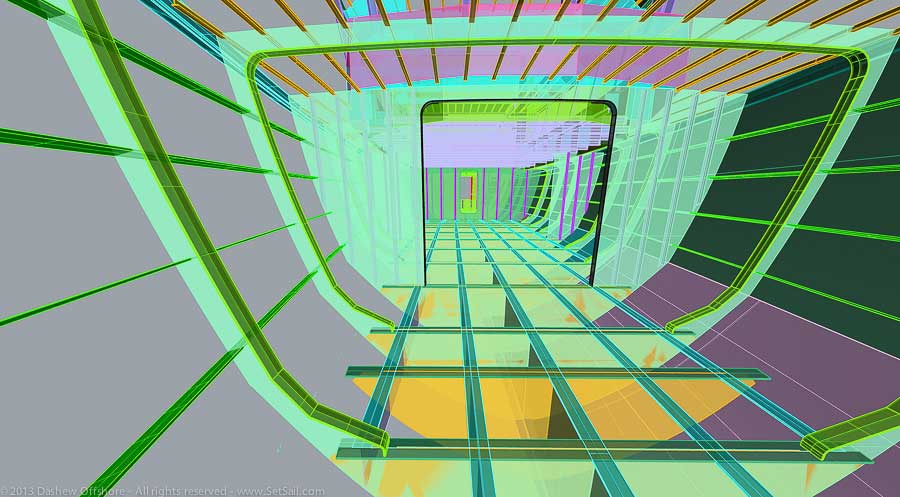 The next screen shot has a look down the center of the framing, and you can see how the structural framing also acts to divide the tanks, and works as baffling, to reduce sloshing noise and free water effect when the tanks are not pressed full.

How does one know when something is too weak, strong enough, or over built? We rely on engineering, experience with bumps, and gut instinct. The tricky part is not burdening the boat up high with unnecessary material, as this compromises ultimate stability. There are a variety of scantling rules which can be used as a baseline. Our choice for many years has been the Lloyd’s Special Craft rule. This is a very conservative rule and works well with aluminum structure. However, the rule on its own does not give us a high enough factor of safety for our own peace of mind. So we basically double the stiffness requirements from the deck edge down.

When you start out with the LSCR you have a series of interrelated variables which impact the required strengths. These include boat displacement, speed, wave height or sea state, and acceleration forces. As the structure is designed, the projected structural elements are analyzed, and the various structural properties calculated against what the rule requires. 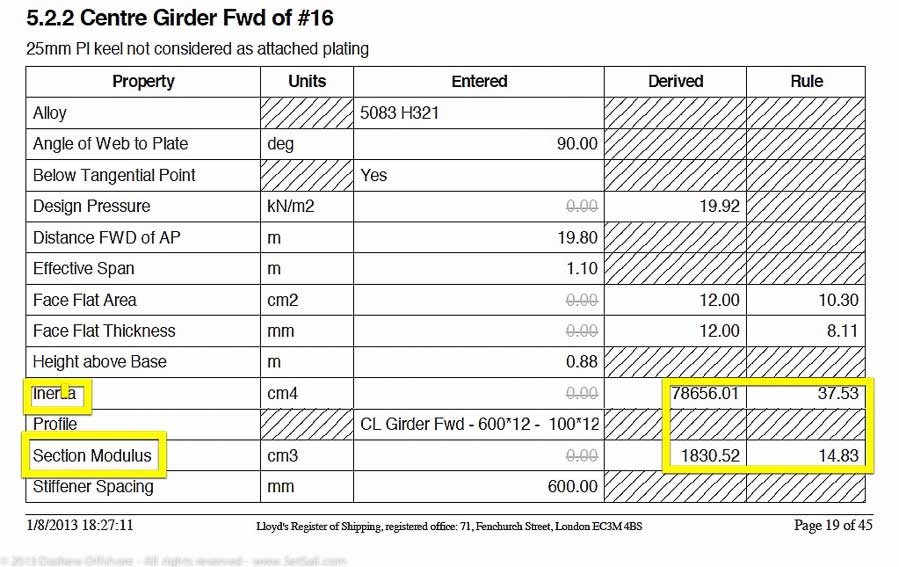 Here is an example of the centerline girder in the forward part of the hull bottom. You will note that there are several orders of magnitude in excess stiffness. 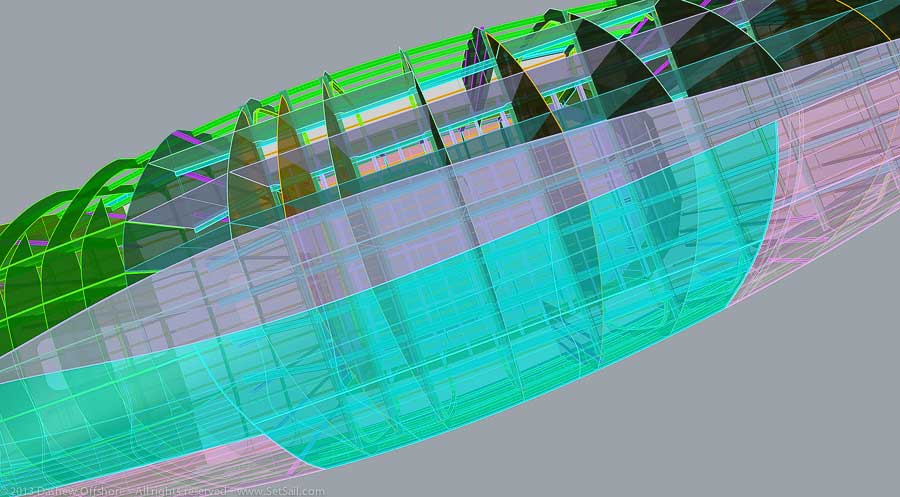 This is the result of our very deep structure, that goes with both the tank structure and the strength we want in the bow in a contest between us and some other object. Think about this centerline girder’s strength, and then add a series of them on either side of center as the hull widens out going aft. This sort of framing would come in to play if we were to find ourselves with the boat supported on the ends, with nothing in the middle. The screen shot above is looking up into the center of the boat from the underside. Plating is cut away on the top of the image and shown in X-ray view with the framing behind bottom plate below. 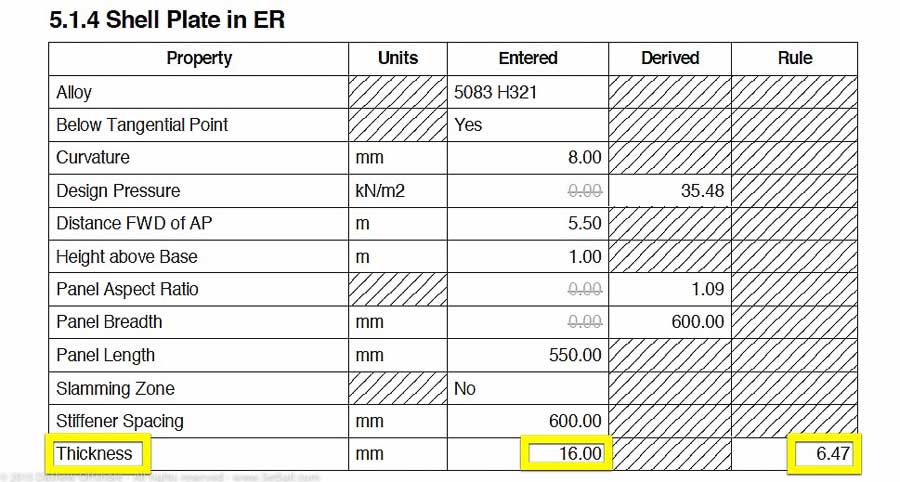 Switching now to the aft end of the boat: the shell (or bottom) plating in the engine room. The rule wants 6.47mm, of plate or about 1/4″. We are using 16mm/5/8″. Back aft like this we are chasing vibration and structure-borne noise. Normally we would use 12mm/1/2″ in this area, but as we have some weight budget saved up, we are going to add this extra material under the engine room as an experiment.

The bulkheads represent a different logic for extra weight. The rule wants 3mm/1/8″ and we are going to use 5mm/7/32″. If we were building a work boat, the 3mm aluminum plate (stiffened of course) would be fine. But in a yacht, thin plate like this distorts too much when welded, requiring an inordinate amount of shimming for the interior liners. So we are throwing a bit of weight into this, and the other aluminum bulkheads, for aesthetics, with a side benefit of a higher factor of safety and some additional resistance to torsional loading.

Obviously a structure this strong is going to be heavy – on the order of 18 metric tons / 39,000 pounds – and that is a huge amount of metal for a yacht of this size. We can handle the resulting displacement while maintaining the range, comfort, and draft requirements, but there is no room for sloppy construction practices in structure, systems, or interior.

More aluminum equals more man hours for metal work and welding. And keeping a close watch on the rest of the boat’s weight does not come for free either.

For comparison, the 78 foot ketch Beowulf, which we drove hard for over 40,000 miles, had less than half this much metal in her hull. The FPB 83 Wind Horse, no slouch on the mileage (60,000) or toughness standards, had just over half this amount of material.

Will we ever really need this much structure between us and the fates? That is an answer we hope to never discover. What we do know right now is that this will be the toughest structure we have ever launched, one that will give us a higher degree of emotional comfort than ever before. And should we chose to continue cruising off the beaten path, in those poorly charted and often ice bound areas we find so alluring, it shall be with the knowledge that we have done everything possible to stack the odds in our favor.

This entry was posted on Friday, August 9th, 2013 at 8:40 pm and is filed under Dashew Logs, FPB 78, three. Both comments and pings are currently closed.