“Having a boat that can deal with whatever might happen—no matter what—provides a mental comfort level that defines their view of happy sailing.”
–Bill Parlatore, Editor, Passagemaker Magazine 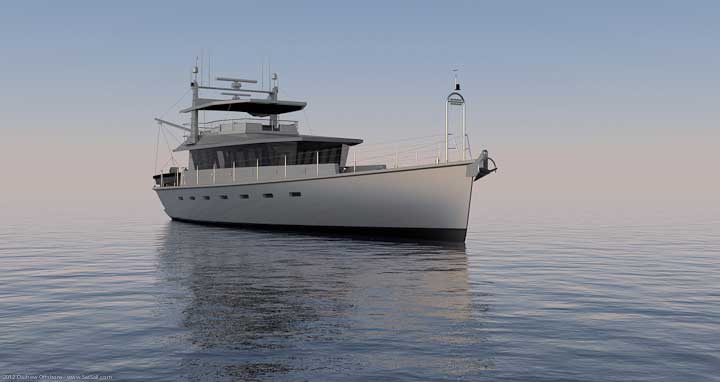 Designing, specifying, and building a modern cruising yacht demands clear goals about what the yacht is intended to do. In the FPB Series, as with all our yachts, the first priority is going places (read: crossing oceans) in maximum comfort and safety, quickly, with the ability to operate for long periods away from civilization. Toss in optimization for short-handed passage-making–cruising as a couple should the owners so desire–and you have the ability to go where and when you want, without concern for crew requirements, servicing errant systems, or the schedules of yacht transport companies. 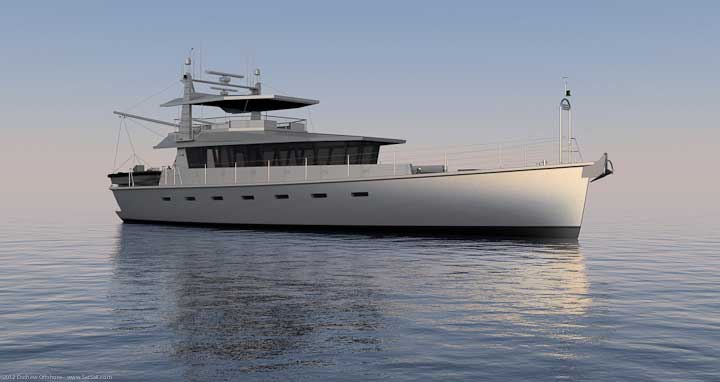 The FPB 97’s ability to be handled by a couple, with or without crew, sets a new precedent for large yachts. The 5,000+ nautical mile range, systems and structure designed for extreme latitudes, coupled with enormous storage capacity–the forepeak alone is 26ft/8 m long, the fridge and freezer have 50 cubic ft/1.4 cubic m capacity, fuel tanks hold 5,000 gallons/18,000 l–gives you the freedom to cruise to the farthest corners of the globe, and the flexibility to choose when and where you re-supply. Add in a highly evolved systems integration, encompassing ventilation, heating, air conditioning, refrigeration, and an electrical system that allows the FPB 97 to operate off the grid, with minimal requirement for fossil fuel, and you can see what has everyone so excited. 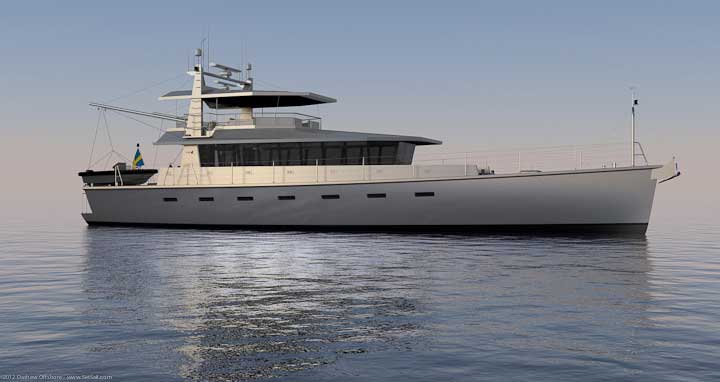 We think of our yachts as tools that will allow us and our owners to venture forth with minimum anxiety, frustration, and hassle and every aspect of the FPB 97’s design, construction, and outfitting has this outcome in mind. 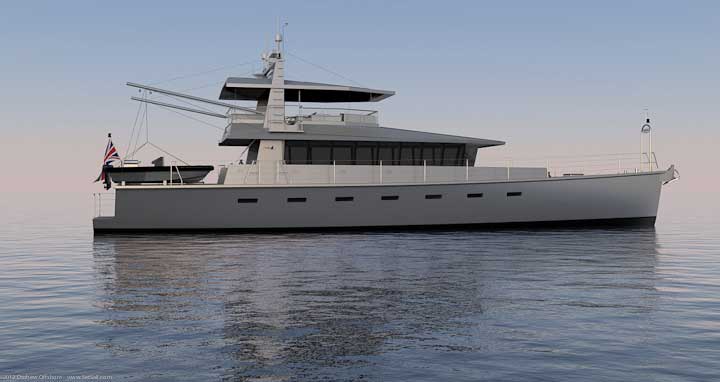 We expect our own yachts to be able to head for distant shores when the fancy strikes (with an eye on the seasons, of course). We expect our clients to have this same freedom. If we are in Marina Del Rey, California on a Monday and decide to visit the South Pacific again, by Saturday we’ll be under way (it takes two days to provision for six months, a day to check drive lines and systems, and we never leave on a Friday). With the FPB 97, ten days and four hours later we’ll be at anchor in Taiohae Baie in the Marquesas Islands, having easily averaged our nominal 11.7 knots on the 2800 nautical mile passage. And we won’t need to think about refueling until Samoa, several thousand miles west (where the fuel is clean and will cost half of anywhere else). We could just as easily be in Florida and decide to head back to Greenland, or make a quick summer’s trip to the British Isles. 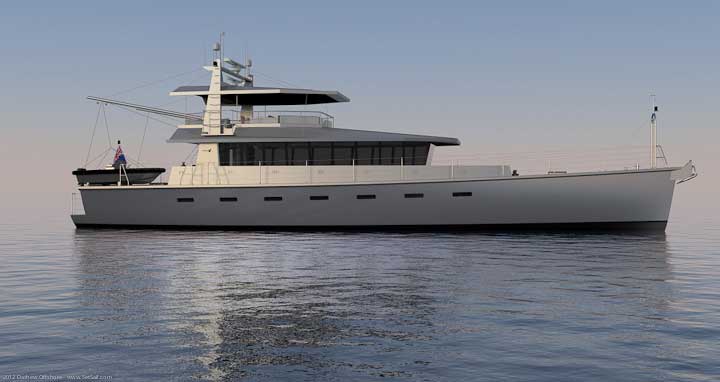 There is an enormous amount of data to cover on the FPB 97, which we’ll do over the next few weeks. But before we get into the prosaic information, we want to discuss another important issue: whether or not a yacht tugs at your heart strings. As important as the functional considerations are, we feel that in order to really enjoy cruising you have to be in love with your yacht. Function does add to the aesthetic equation, as does familiarity. But at some point, when you look back at the boat while standing in your dinghy,  we would hope your breath catches. Most yachts, motor vessels in particular, look better from high up. This is why you always see renderings and photos taken from altitude. But those images are not how we see our yachts in the real world. We see them standing in the dinghy, six feet off the water at best. So unless you want a rude surprise, it is better to evaluate aesthetics from the lower perspective. 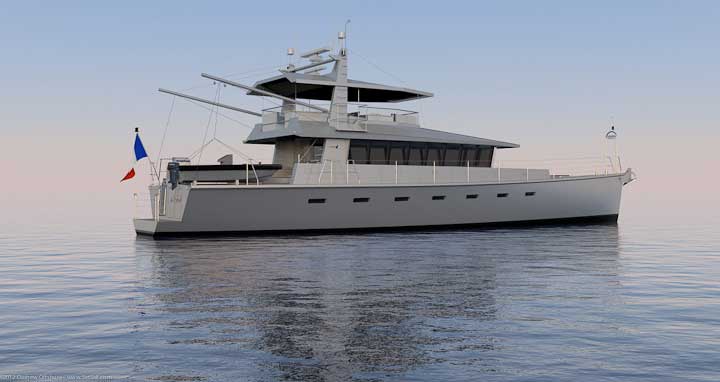 A second part of the emotional relationship is how the yacht treats you. If she keeps you satisfied, with minimum frustration, then love will blossom. But if you are beset with continuing maintenance issues, crew problems, and schedule conflicts, if you are uncomfortable at sea and counting the hours till landfall, perhaps a little worried about the “what ifs”, then soon there are more reasons to stay at the dock than to head offshore. 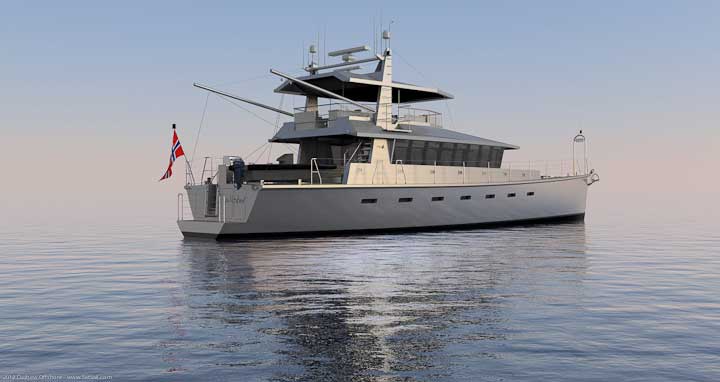 We  prefer love over frustration. 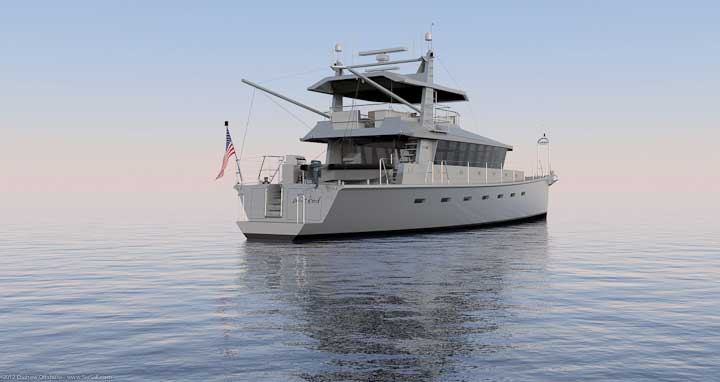 In these renderings the camera is 100 feet/ 30 meters from the FPB9, as if in an anchored dinghy, with the FPB 97 rotating on a turntable. Height of the 50mm lens is six feet/1.8m. Being within a boat length with the camera, or your eyes, is a worst case aesthetic scenario. 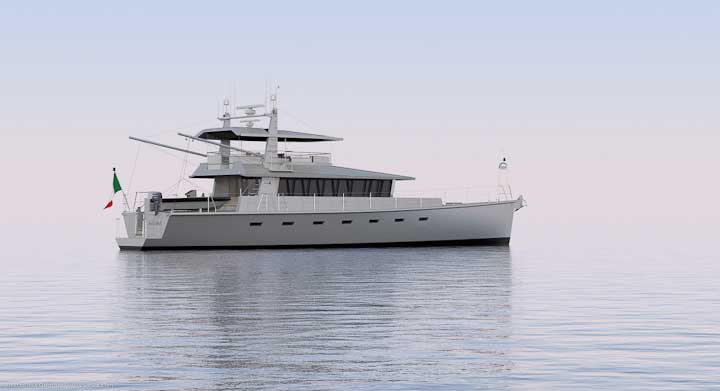 Move back another boat length and things look a lot sleeker. 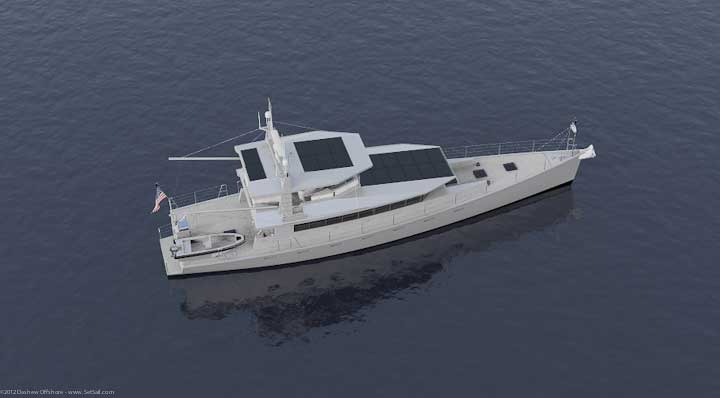 And just for fun, let’s assume we’ve got Ivor Wilkins in Auckland out for a photo shoot during sea trials for the FPB 97 (Ivor took the Wind Horse, Avatar,and years ago, Beowulf, photos that are so wonderful). If we were at rest when he flew over, it would look like these images. Not what we see from the dinghy, but cool hanging on the office wall none-the-less. 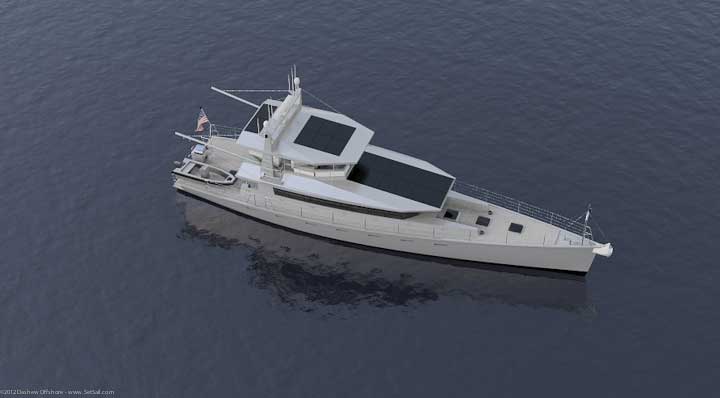 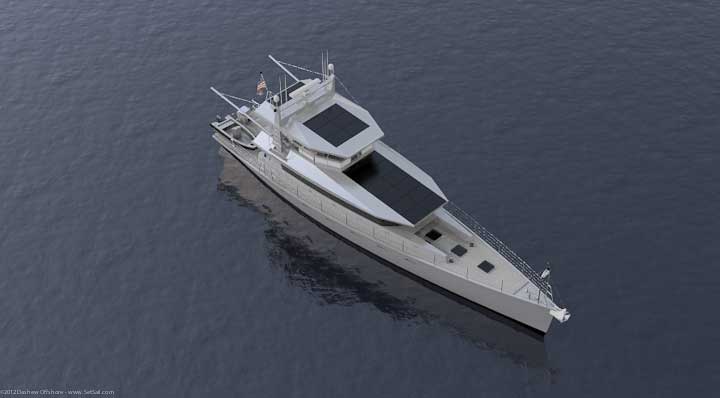 And since we mentioned our good friend, Ivor Wilkins, we’ll re-post the image below. That’s Ivor’s shot from the Wind Horse sea trials, with the FPB 97 inserted. The reaction of the hull to the sea, and the wake, will be a touch smoother with the new design. We think that is wickedly cool. 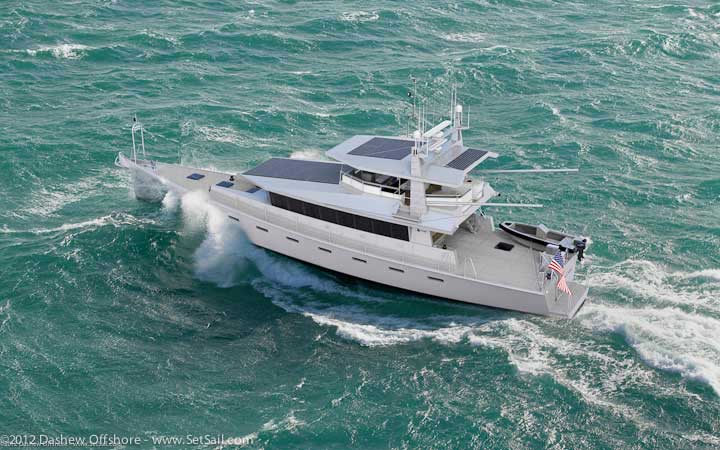 This entry was posted on Monday, February 13th, 2012 at 5:37 pm and is filed under Dashew Logs, Wicked FPB 97. Both comments and pings are currently closed.