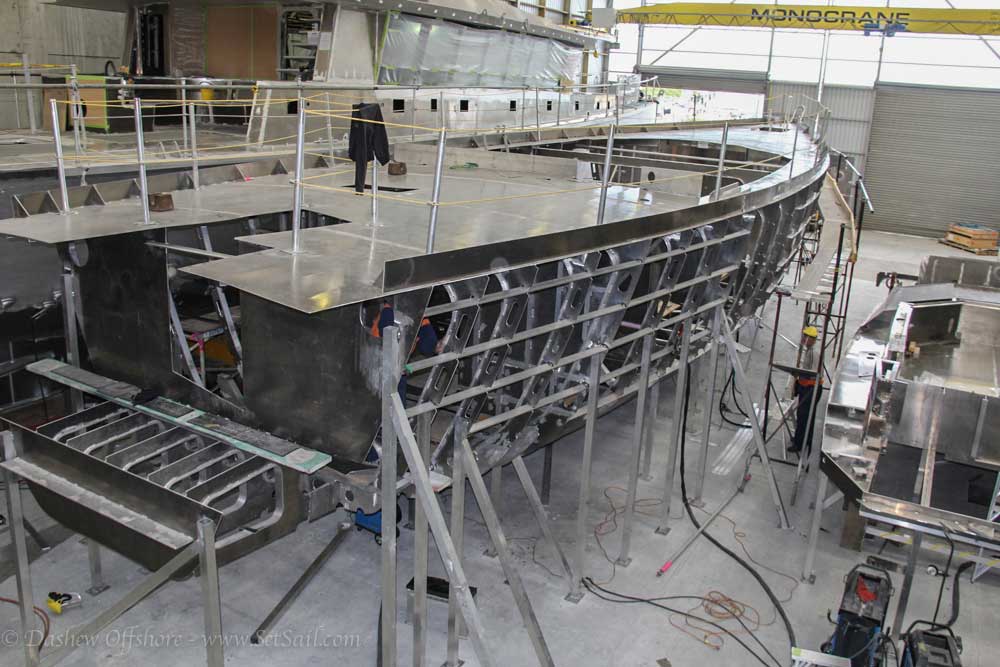 FPB 78-1 is now framed, deck plating is on, and hull plating begins soon. Which is good because we are depressed with this enforced stay on land.

While we are toiling, nose to computer, the FPBs are out cruising. FPB 64-1, currently in Eureka, California, is journeying up the Pacific Coast towards British Columbia and Alaska. FPB 64-2  Sarah Sarah is getting ready to cruise the same waters, while FPB 64-3, Iron Lady, is in Hawaii, soon to depart for British Columbia. Party in the northwest anyone?

Meanwhile FPB 64-5 Tiger is preparing to cross to Fiji or Tonga from New Zealand, FPB 64-6 Grey Wolf is midway on her 4000+ NM trip from the Marquesas Islands to Panama. Then there is FPB 64-7 Buffalo Nickel that just came down to New Zealand through a series of gales, and FPB 64-8 Atlantis which will shortly depart for New Caledonia. Finally, FPB 64-9 is now at sea heading for Fiji and the start of the tropical South Pacific cruising season.

If you too are depressed with being stuck on land, the least we can do is share a few construction photos. 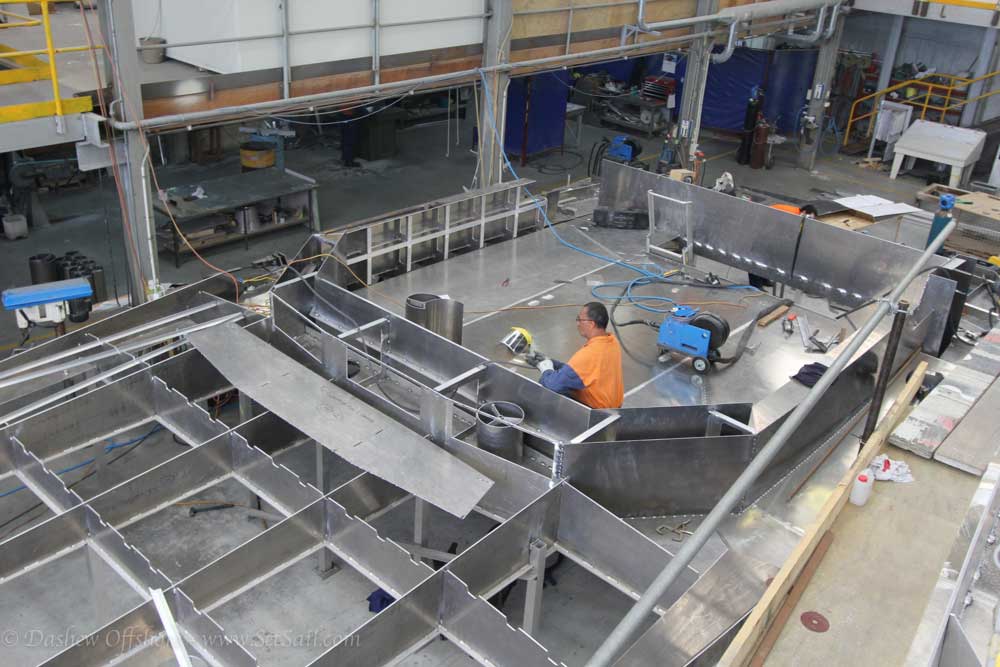 The great room roof/Matrix deck sub-assembly is coming together. The openings in the forward section of the coaming are for the passive ventilation system. That 325mm/13” pipe is for four Dorades bringing fresh air into the the great room. The welder is in the forward part of what will become the Matrix deck. 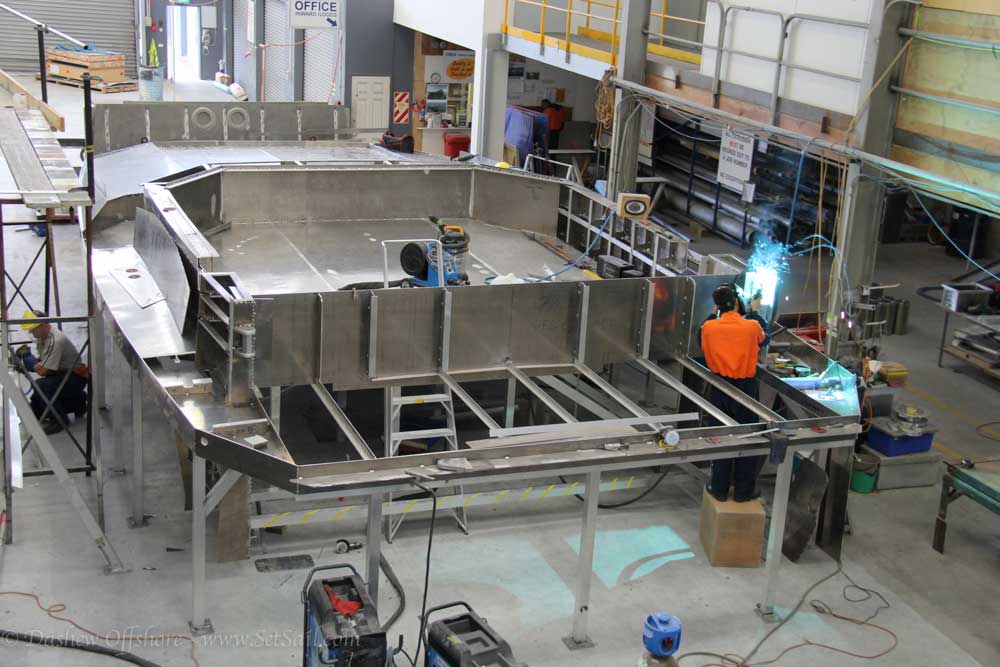 Looking at the roof from aft. The projection closest to the camera will become an awning and solar panel framework. 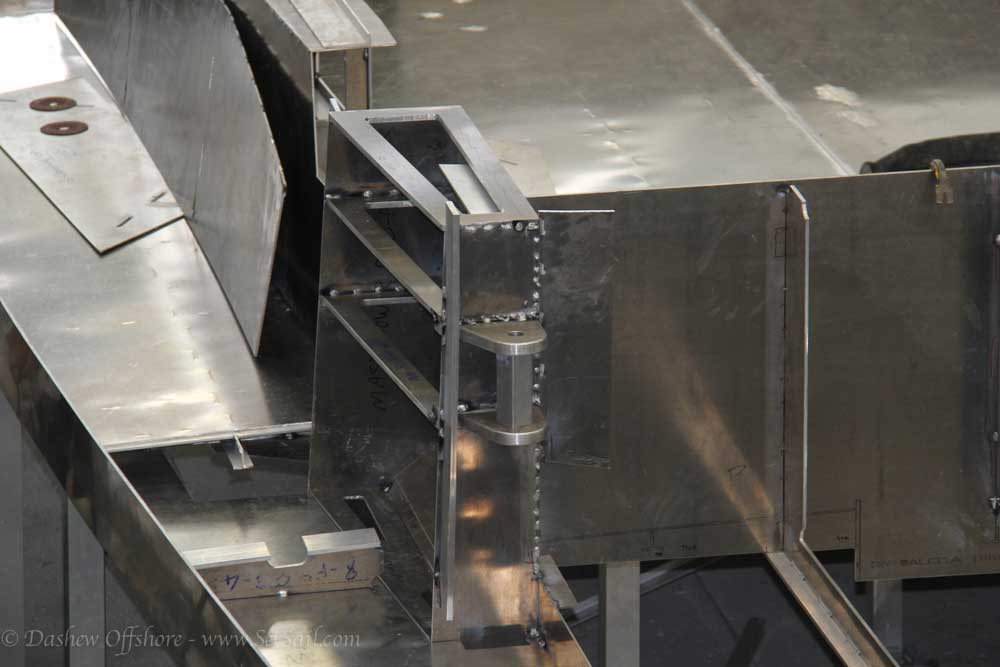 Trailing edge of one of the masts, with the lugs for the port boom gooseneck (articulating joint) in place. 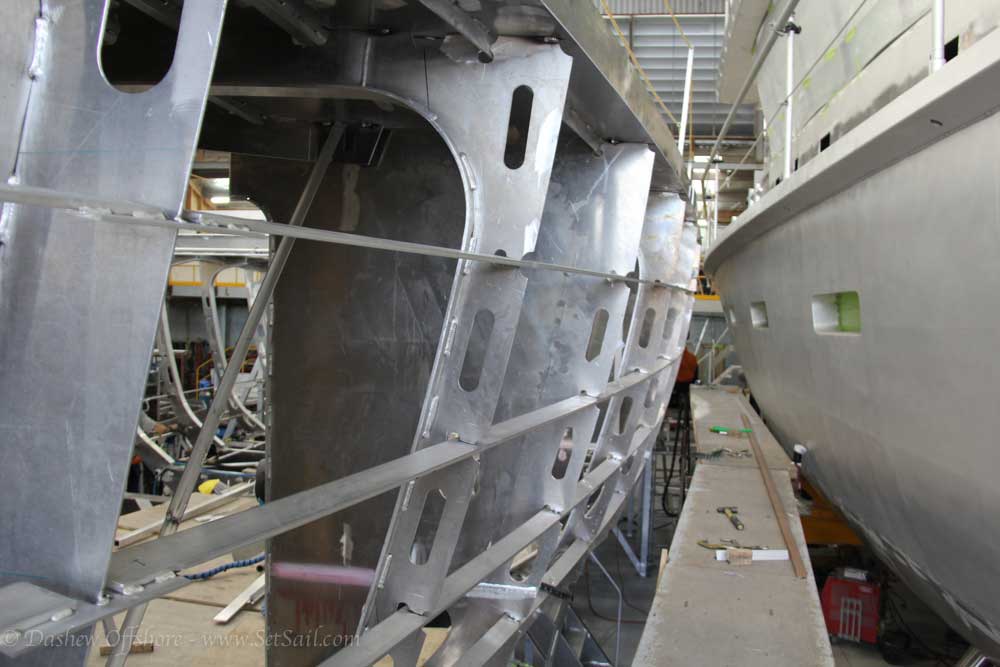 The slots in the frames are for systems – plumbing and wiring. 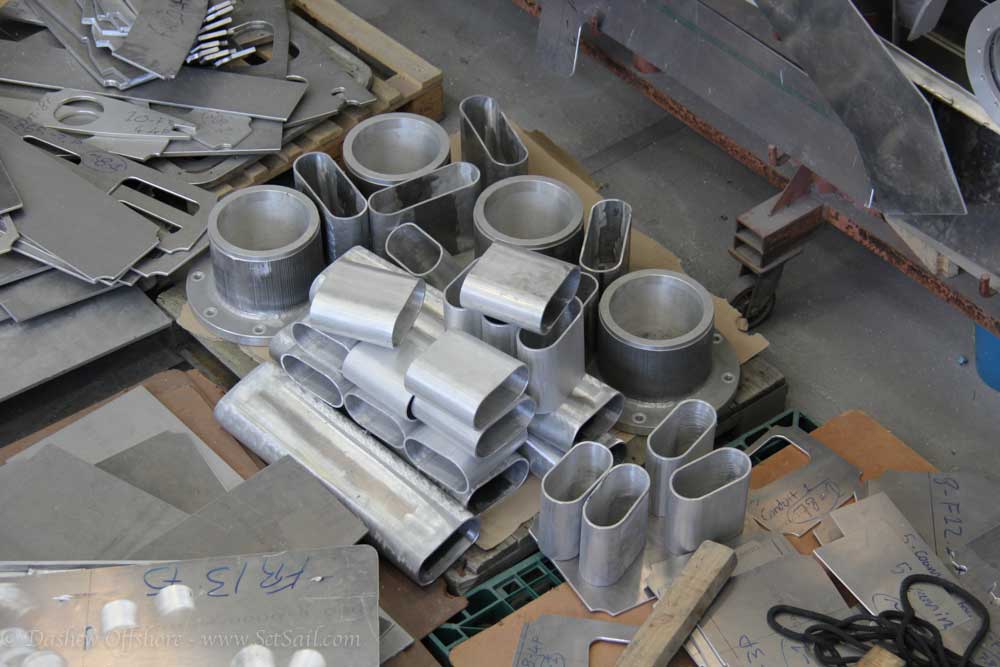 The slots in the frames are reinforced with doublers, shown here along with stabilizer bosses. 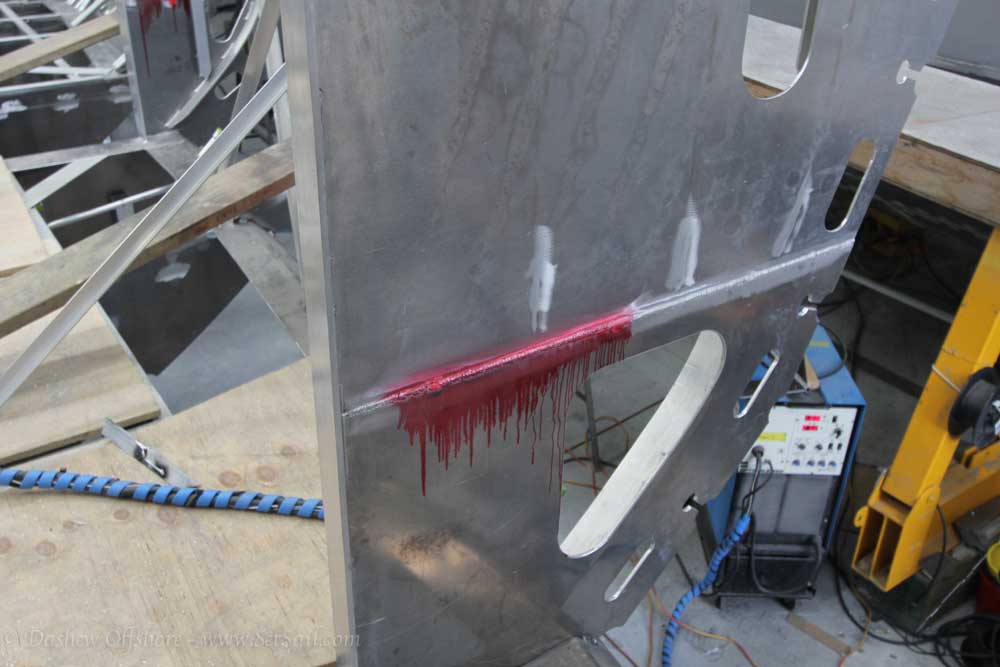 The first survey has taken place on the structure. The red is the residue from a penetrating die test checking for weld porosity. 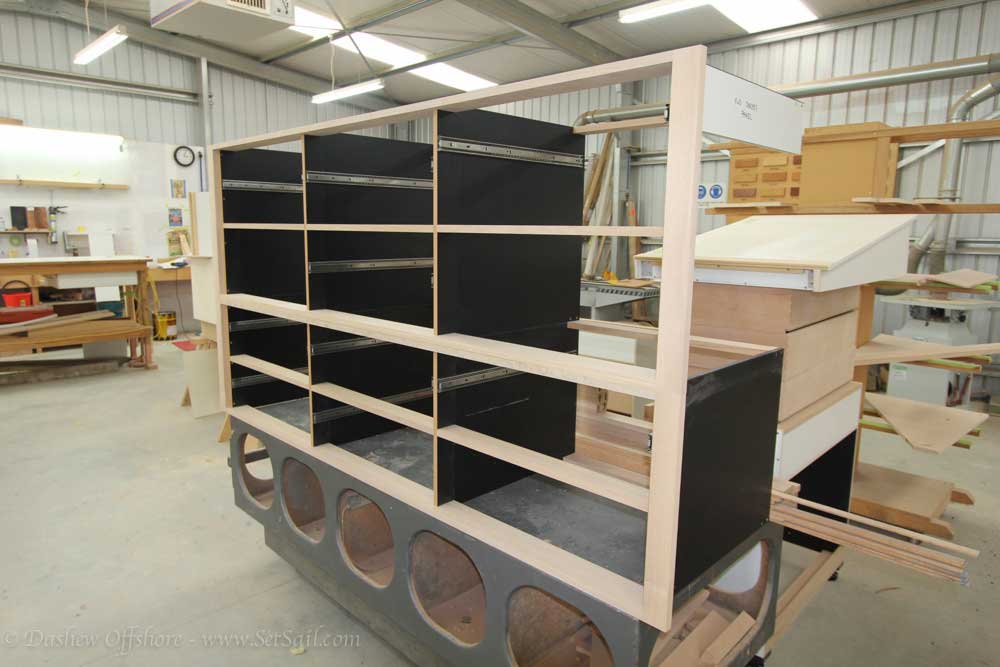 Meanwhile the cabinet shop is in full swing. This is the carcass for the locker at the aft end of the galley. 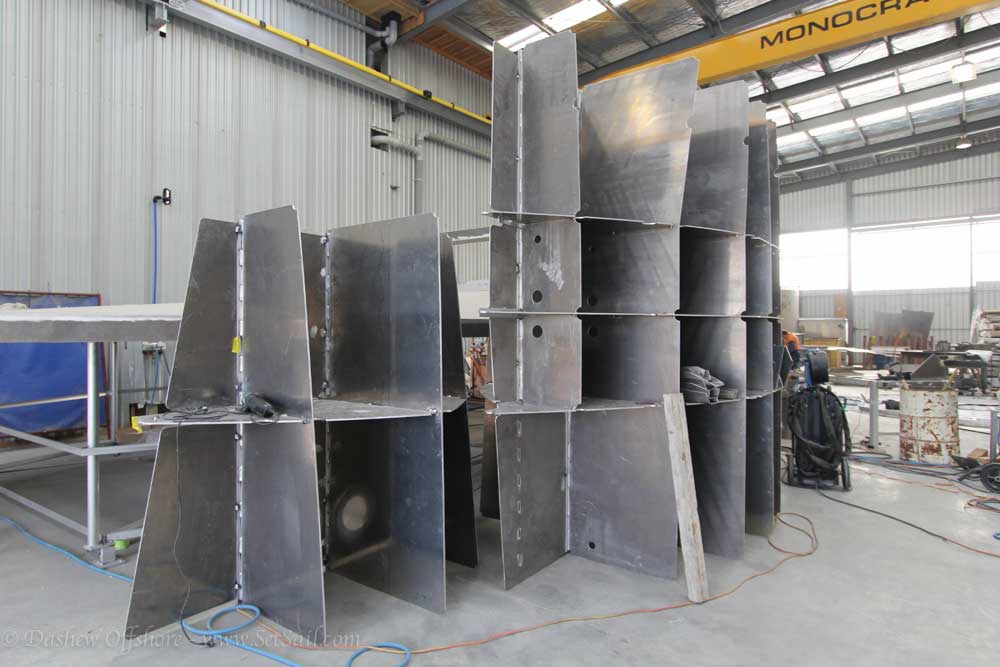 A small part of the sub assemblies for FPB 78-2, patiently waiting their turn in the bay next to FPB 78-1, once the great room roof is completed. 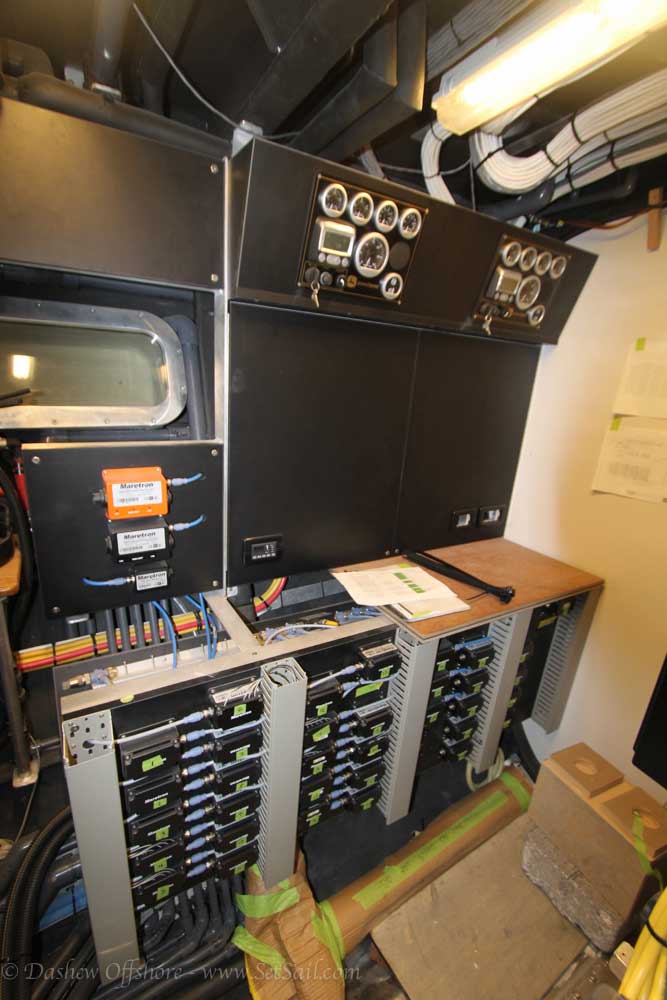 Moving over to FPB 97-1, this is a look into the systems locker adjacent to the engine room. The devices below the bench top are a part of the N2K data system. 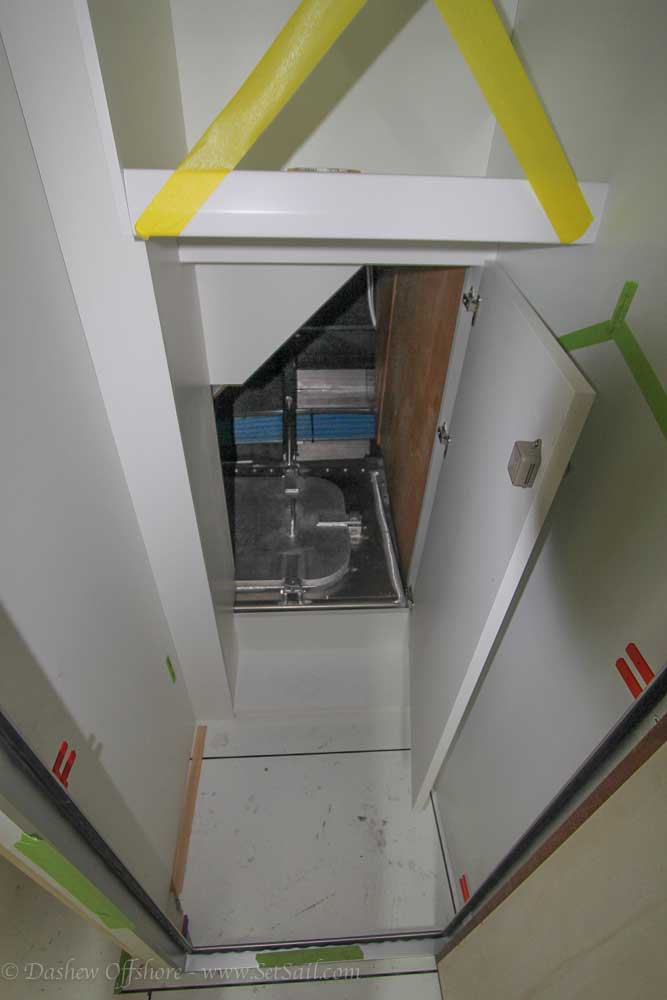 A mundane but important detail mid-ships in the FPB 97-1. This is the starboard stabilizer fin coffer dam access, under the stairs. The lid is easily opened for inspection and minor maintenance. Major projects, should they occur, the stairs come out. 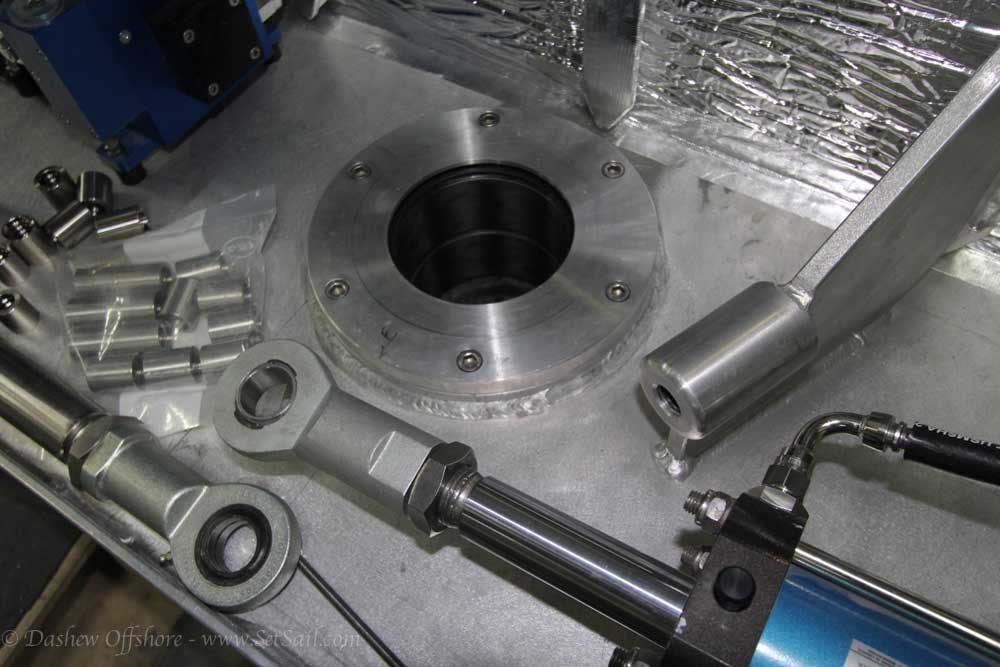 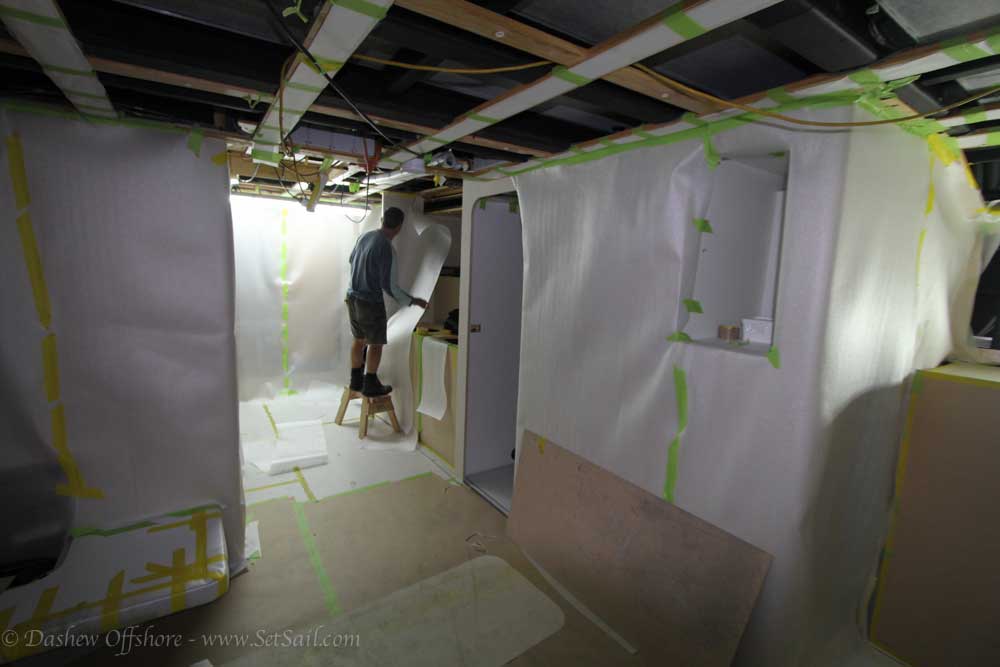 Wall coverings are now going up, and are quickly protected. 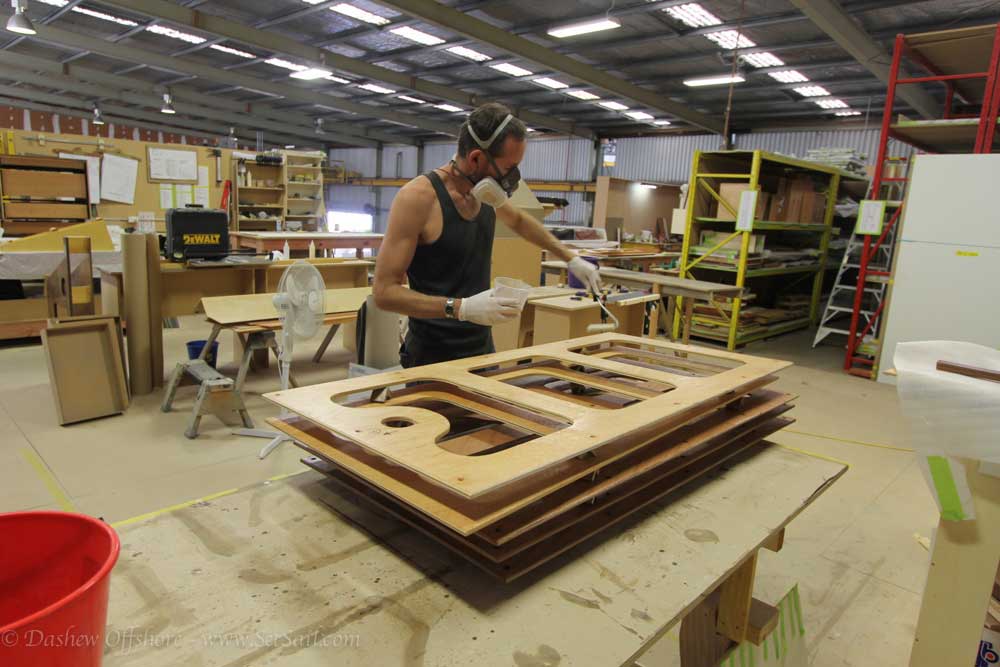 Headliner panels for the FPB 97-1 being sealed prior to upholstery. 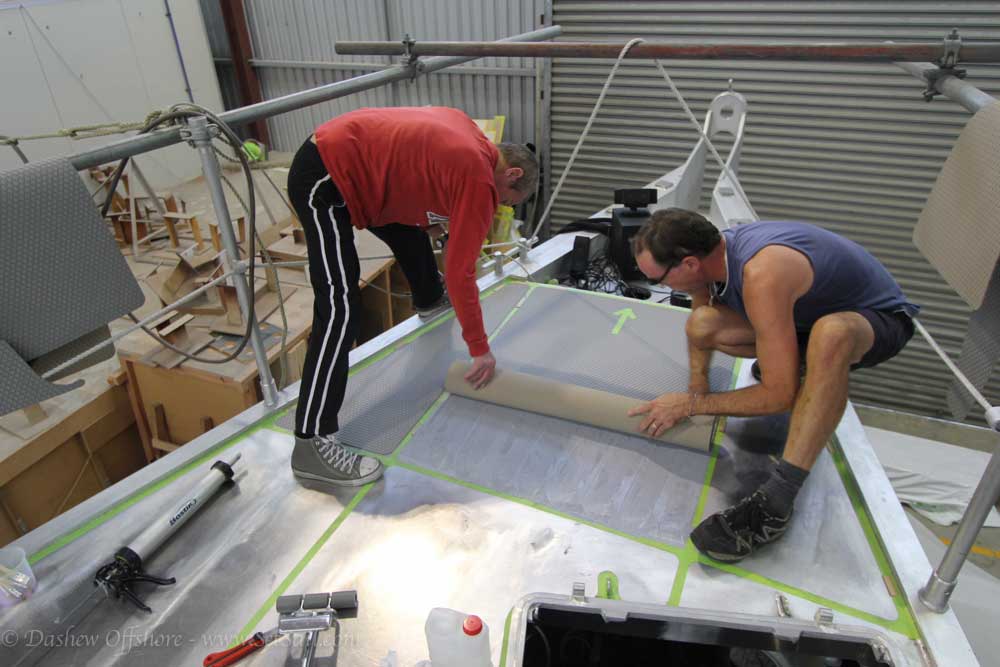 Switching boats, the non-skid is being applied to the deck of FPB 64-10.

This entry was posted on Wednesday, May 14th, 2014 at 12:56 am and is filed under Dashew Logs, Dashew Offshore, three. Both comments and pings are currently closed.