When the pieces suddenly fell into place for the FPB 97, a key element of the concept was this new deck.Matrix: “Something that constitutes the place or point from which something else originates, takes form, or develops: The Greco-Roman world was the matrix for Western civilization.”

From Wikipedia: “The film [The Matrix] depicts a future in which reality as perceived by most humans is actually a simulated reality created by sentient machines to pacify and subdue the human population…Upon learning this, computer programmer ‘Neo’ is drawn into a rebellion against the machines, involving other people who have been freed from the ‘dream world’ and into reality.”

A combination of pilot house and flying bridge, it offered both function and ambiance in a different form than convention dictated. There was a synergy between these two elements catalyzed by the use of the astonishingly translucent EverClear windows. The dream of a liberating, open yet protected living space, with superior perspective, suddenly became reality.

“If liberation is possible, it is possible only as a result of great labor and great efforts, and, above all, of conscious efforts, towards a definite aim.”
–G. I. Gurdjieff, philosopher 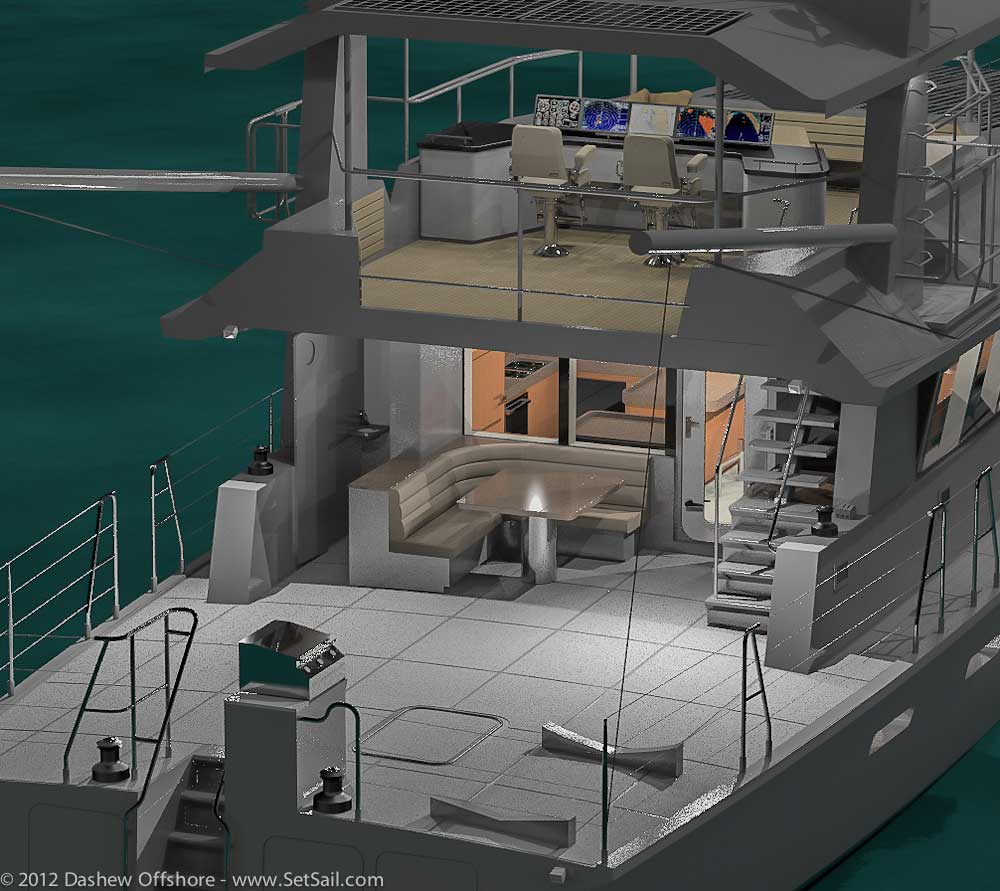 Consider how the FP 97 Matrix Deck will function. You exit the Great Room on the main deck and, if desired, stay totally protected fas you climb the stairway.

At sea, the lines of sight are excellent through 90% of your potential view field, and by moving a few steps you cover the other 10%. You are positioned in the zone of maximum comfort for head seas. When conning in difficult circumstances, you not only have good sight lines, but with some or all of the windows open you are in touch with the surroundings in manner that cannot be duplicated when inside. Situational awareness is enhanced.

Couple this high degree of function with the ambiance of a lovely salon, or tropical lanai.

The con is central, guests or mate can enjoy the passage with you, in extreme comfort at sea and with astonishing views at anchor. You have the choice of heating this area with the ship’s diesel boiler, air conditioning, or best of all, simply opening some or all of the surround perimeter for natural air flow.

The helm is designed for maximum situational awareness during routine periods on watch and when piloting in challenging conditions. The wings on each side provide a convenient location for books, the log, a snack, and serve to hold you in place. The trombone-shaped rail projecting aft from the desk helps to confine your body, and slips forward out of the way when not required.

There is plenty of monitor room: five nineteen-inch screens are shown, with sufficient desk space for the usual dials, knobs, and gauges.

The volume of the Matrix Deck is enormous:  6.8m/22′ by 4.4m/14′. That is as large as the Great Room on the FPB 83 Wind Horse. The layout is well aft and the helm, centered in the Matrix Deck (just forward of the masts) is directly on the projected pitch axis for minimum acceleration and maximum comfort (not that this yacht will feel much going uphill). 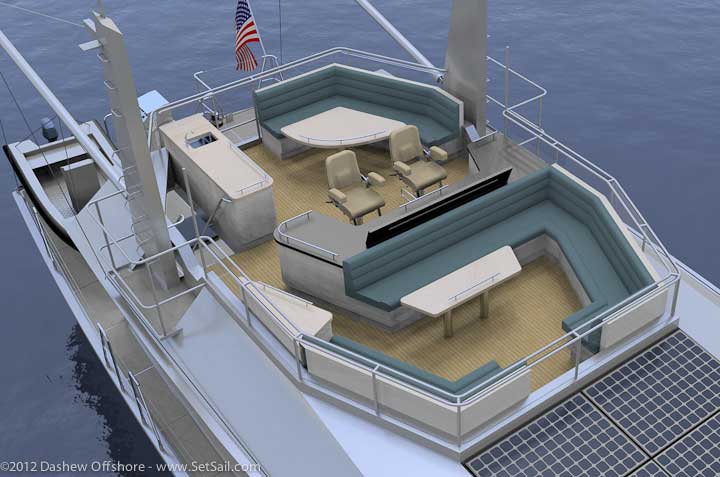 The furniture is positioned to provide support at sea, yet retain an open feeling at anchor. Sufficient space is on hand for two groups of guests, should you choose to share your worldy view. 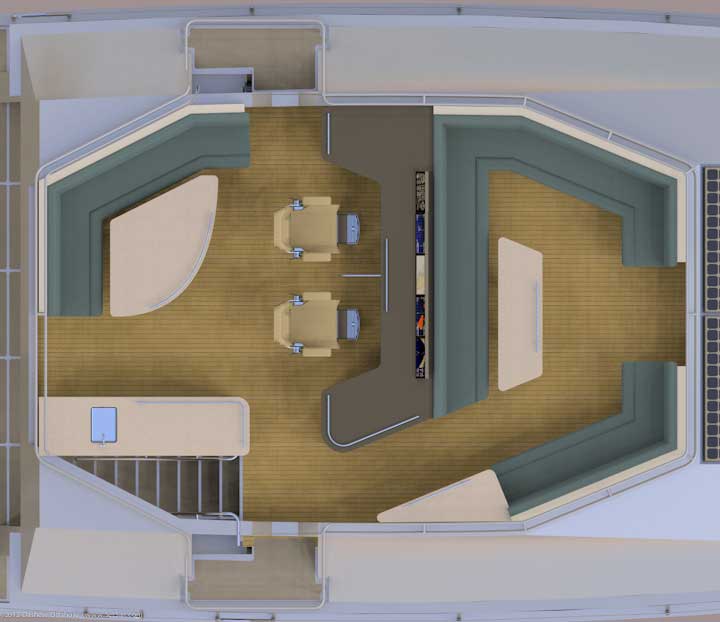 The Matrix Deck is surrounded by an EverClear window system, similar to what was recently installed on Wind Horse. This is significantly more clear than conventional structural glass. EverClears also block UV radiation and hinge open from the outside towards the interior. Cold rainy day, windows closed. Nice day, let’s open them (and if we’re in the tropics maybe they will all be open).

Aside from two separate social groupings, with good circulation, the settees forward are a great place from which to keep watch offshore. They also provide a comfortable spot for the off watch to sleep, close at hand for a quick consultation should the need arise.

Sight lines are always a problem with larger yachts; often it’s impossible for the skipper to see his/her crew, the ends of the boat, or the dock. This results in tension, occasional expensive and embarrassing operator error, and the use of those crew headsets. There are also issues of ships creeping up from aft, and debris, ice, and small boats close in under the bow. Using 3D models we are able to simulate the view field from anywhere on the boat, and the layout of the Matrix Deck will give good visibility in almost all conditions. And if you are working in ice or debris strewn waters, walk 3m/10 feet forward in the Matrix Deck and you can see within half a boat length of the bow.

The after deck area has many possibilities and with a 26’/8m forepeak in which to store furniture, it will be possible to mix and match between the various areas on the main and upper decks that lend themselves so well to entertaining. The layout above could be called a classic use of this space. 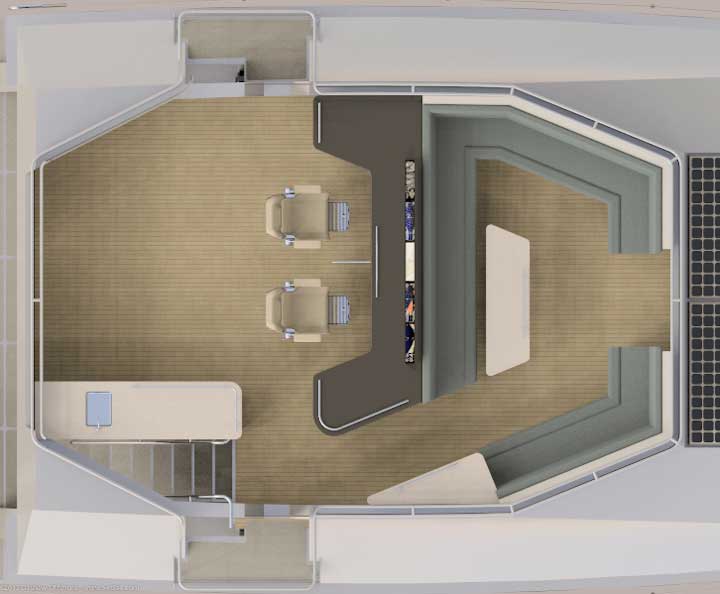 Leave this open and it becomes a romantic dance floor, the perfect location for napping on a chaise, or an overflow sleeping deck for the younger generation. 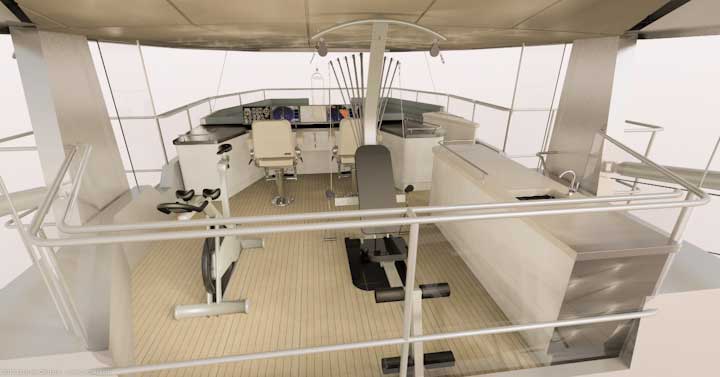 Need a place to work out? There is room for two exercise machines.

This area on the first FPB 97, now just starting construction, will be left totally open for maximum flexibility. A variety of outdoor furniture will be carried in the forepeak, so the space can be optimized for the current requirement.

Speaking of FPB 97-1, the forward seating area and coaming sides will be in bare teak. The table will drop to create a giant day bed. 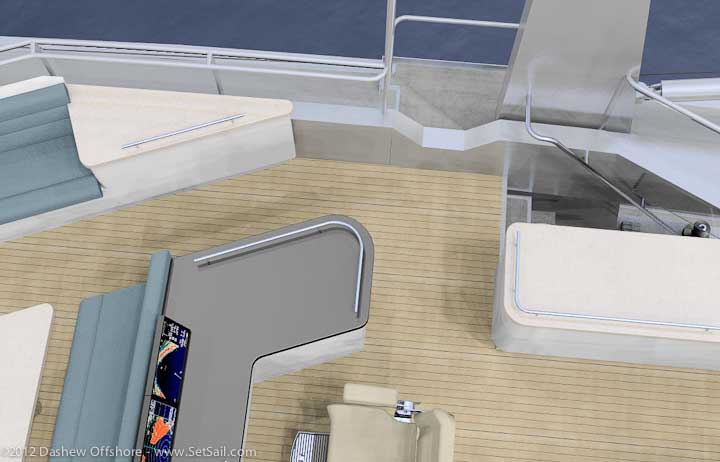 We have specified what may appear as a surplus of grab rails. 99% of the time  these will be excessive. But occasionally, maybe once every few thousand miles, the FPB 97 and a wave crest may meet in just the right manner as to induce an out of sync acceleration which has you reaching out to support yourself. When that happens, we want a rail close by. Notice the double rails around the perimeter. They help in the open areas. But equally important, any time you are seated there is a double close behind the cushion onto which you can grab.

We are uncomfortable maneuvering a large yacht in tight quarters while being blind in some sectors. And the concept of depending on two way comms for distance from another vessel or the dock leaves us cold. The answer is shown above: a piloting station outboard and almost even with the deck edge. This is also a wonderful photo platform. 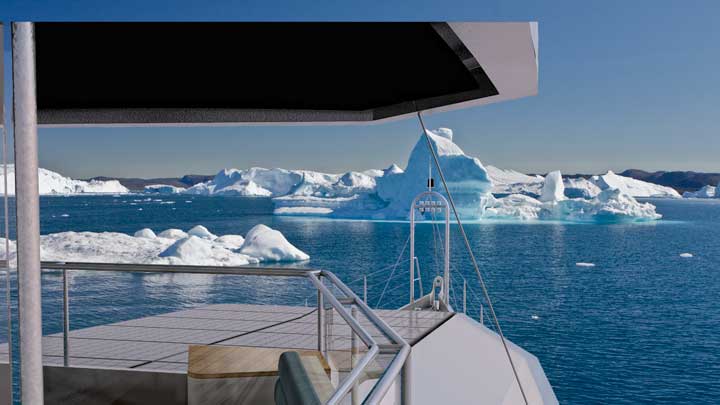 And will provide a great place to watch ice and debris fields. 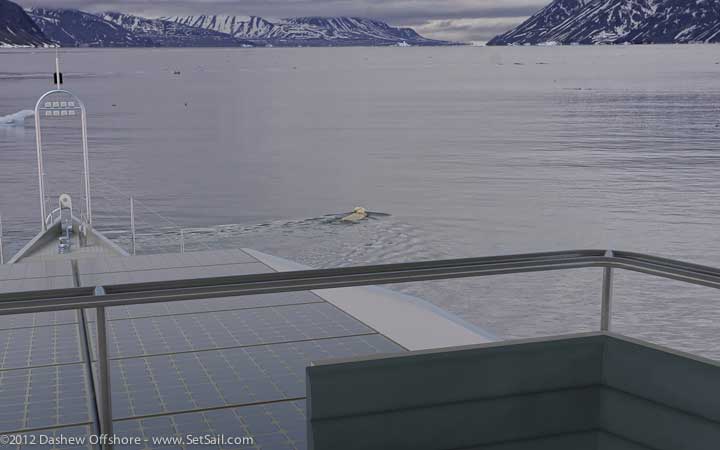 All of the photos and talk lead up what you see and feel from and within this unique space after piloting yourself to some wonderful destination. It could be a polar bear swimming at 79 degrees 45 minutes north latitude in one Svalbard’s exquisite fiords. 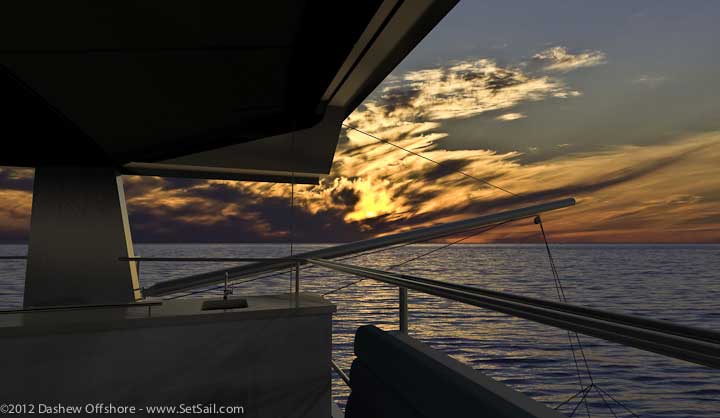 Or a sunset so beautiful it moves you to tears on your way across the Atlantic. We’ll leave the other scenes to your imagination.
For more information on the FPB Series, e-mail Sue Grant: Sue.Grant@Berthon.Co.UK.

This entry was posted on Saturday, January 7th, 2012 at 2:16 pm and is filed under Dashew Logs, Wicked FPB 97. Both comments and pings are currently closed.