Iron Lady In A Full Gale To The Tropics 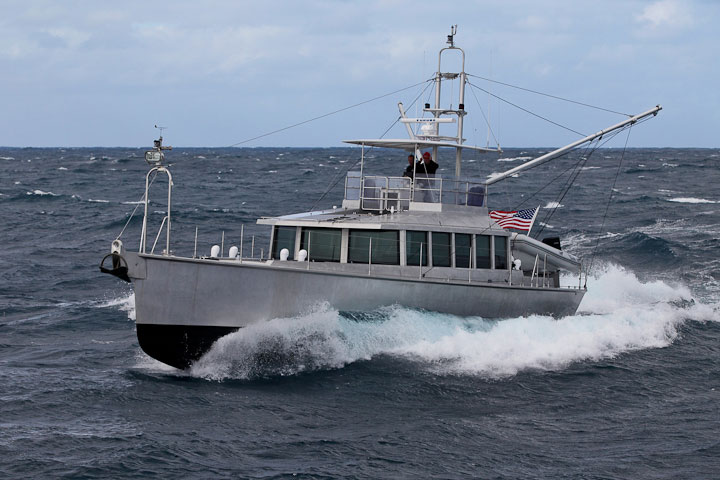 If the sea trial photo above has you wondering how the FPB 64 handles heavy weather – say seas three times this size and 30 to 40 knots of wind – we have a couple of e-mails from Pete Rossin aboard Iron Lady, to sate your curiosity. Pete and Debbie, and crew Steve, are on their way north to the Islands. They left New Zealand with the intention of riding a bit of gale force pressure north, and getting in a few rides in the process.

Currently we are about 200 NM from Whangarei.  Last night it blew 30 to 40 out of the SW – wish I could have gotten video as the waves were spectacular.  Numerous surfs in the 13’s and 14’s – record so far is 15.6 knots.  Took a bunch of video at first light but the waves had already started to subside and weren’t nearly as impressive.

Upon receipt of the above we went back asking for a few details.

Last night winds were 30 to 38 knots and behind us with 2 wave trains – one building from SW with the wind and one lingering train from the north.  Today we are in the high 20’s.  Course is around 14 degrees so wind and waves are mostly from our stern quarter today.

Booms are out.  I am using the Furuno compass.  AP settings are yaw 1, gain 8 – does that sound about right?  I have tried various settings and so far that seems to be the best at keeping course without creating a jerky ride. Course variation is around plus/minus 5 degrees – awfully good in my estimation given the sea state.  Rudder inputs also around plus/minus 5 degrees.  AP does not seem to be working very hard at all.  Seas are 4 meters or better with a few bigger ones.  They are getting more aligned with the wind which is SW and behind us, but last night it was a crossing pattern with steep confused seas and sneaker waves when the 2 wave trains reinforced each other with little warning.  With the exception of a few sneakers that the AP over corrected on during the peak last night, the ride has been exceptional. There has been little or no tendency to bow steer and we have seen multiple surfs over 13 knots with a peak of 15.6 knots.

Deb was feeling a bit queasy last night but seems much better today – she is at the helm on watch now.  While in the bigger stuff last night, I was looking at the pitch/roll readouts on the Maretron.  Even on the bigger ones we weren’t seeing more then a few degrees plus/minus on roll and the biggest I saw on pitch was plus/minus 10 degrees.  More typical was plus/minus 4 or 5.  As confirmation, Deb was sleeping in the salon and was talking to me on occasion while lying down.  No mention about the seas until she sat up and was blown away by how big they were.  The reality is that not much of what is going on outside translates into the inside even in pretty tough conditions.

The following was received late  today.

Last night took the prize!  We are sandwiched between a complex departing low and the approaching high with strong winds and seas from the southwest on our stern.  They eased for a period yesterday afternoon and then came up again last night between 30 and 40 knots.

Seas began to build again but this time with a much longer period and the short surfs we experienced yesterday turned in to 6 and 7 second affairs like I remember from my time on Wind Horse.  Based on the winds and our boat speed, I would put the wave period at something over 14 seconds.  The building waves were big and very steep faced with breaking crests.  Standing in the scuttle and looking back at them, they were at least 5 or 6 feet higher then my line of vision – this had to put them over 5 meters.

As one of these big guys approached, Iron Lady would lift her stern and take off like a rocket – she would quite literally roar down the faces.  Steve saw a peak SOG of over 19 knots on the GPS – I saw a number of 18’s and 17’s were common place.  No water came aboard.

After experimenting with the AP, it has become obvious that Iron Lady likes to be given her head – less of everything is better.  Since she has proved to have a good sense of how to handle things, we have gone along.  My procedure is start at a relatively high dead band and low rudder gain.  I gradually increase rudder gain until we are maintaining a reasonable course.  If the motion at that gain is too choppy, I reduce the gain and narrow the dead band.  By going thru a few iterations, we can generally get in harmony with the boat’s natural tendencies pretty quickly.  Ended up with dead band at 3 and gain at 5 to 6.  I also took the Naiads off adaptive and put them on active instead.  In last nights sea state, they were trying to over control the boat in adaptive and were setting up a harmonic.  Intend to look at the active parameters today as I think the stock ones can be improved.

Inside, life went on pretty much normally.  The boat did her thing with no bow lock or sudden unexpected movements and we went about our business.  The motion was easy and didn’t restrict our affairs in any way.

This entry was posted on Monday, April 18th, 2011 at 7:22 pm and is filed under FPB 64 Updates, Most Popular. Both comments and pings are currently closed.