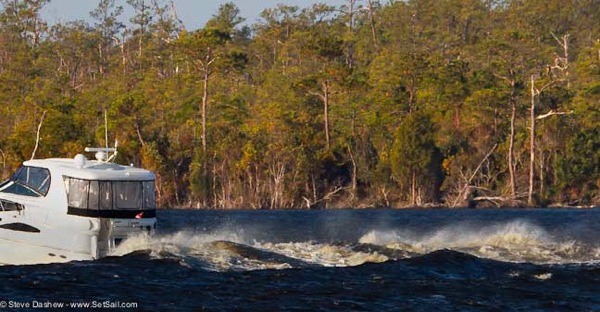 Sitting here at anchor off to the side of of the Intra Coastal Waterway affords the opportunity of studying hull shapes and their wave trains. What we have for you here are several different shapes, each with a unique shape to their disturbance pattern. The boat above is about 35-feet long and is throwing a  huge wake, not a sign of efficiency! This would be considered a planing design, but looks a bit heavier than would be normal, and must be using brute force to overcome the drag indicated by the waves train. 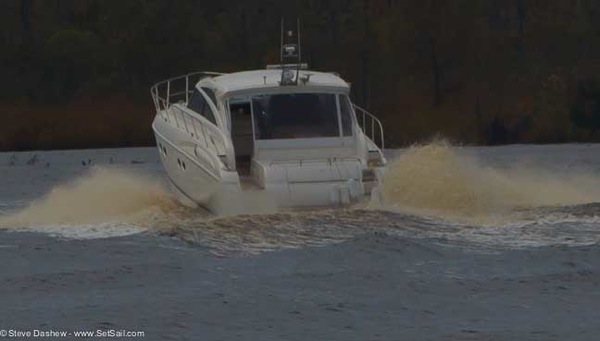 Planing hulls create lift so they don’t get trapped between the bow and stern wave, and  theoretically are more efficient at speed length ratios above 1.3 than displacement shapes. The hull above is probably lighter for its length and the wake looks cleaner than the first boat. 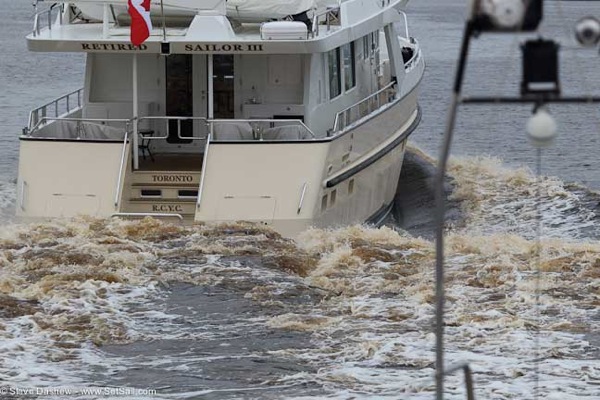 This would be considered a “semi” displacement configuration. She is traveling at about 12 knots well above what is considered a displacement speed. Note the huge trough between bow and stern waves and compare this to the planing hull shapes. Trough depth aside, this a clean running hull. 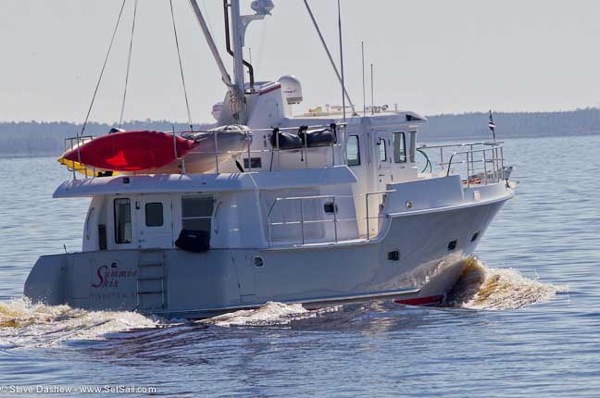 We passed this 43-footer today while heading towards Beaufort, North Carolina. She is definitely a displacement hull, running here at 6.5 knots. Note the hump amidships, not present in the boats above. It could be caused by a volumetric problem with the distribution of buoyancy. Whatever the reason, there are definite drag penalties associated therewith.

Finally, the FPB 83, Wind Horse,  at 11 knots along the East Coast of Lanzarote Island in the Canaries. Minimal bow and stern waves and almost no hull generated hollow amidships. It is this lack of hollows and distance between bow and stern waves that make the boat so efficient. Lest you think the designer a miracle worker, it should be pointed out that the longer and lighter a vessel, the easier it is to get this result. A last comment for you to ponder. You hear a lot about speed length ratios (a multiple times the square root of the waterline length) with most folks holding to the theory that a displacement hull cannot exceed 1.34 times the square root of the waterline length. We can confirm for you that this is not true. Proper distribution of volume in the hull (block and prismatic coefficients) increases effective waterline length. When you couple this with a longer waterline for a given displacement, magic  happens. For example, 300 HP is sufficient to propel Wind Horse at 13.5 knots when she is fully loaded, a speed  length ratio  of 1.5, and she is not a planing hull.

This entry was posted on Friday, October 21st, 2011 at 9:36 pm and is filed under Dashew Logs. Both comments and pings are currently closed.