Rainy Day in Norway – Using Sonar To Find A Ledge 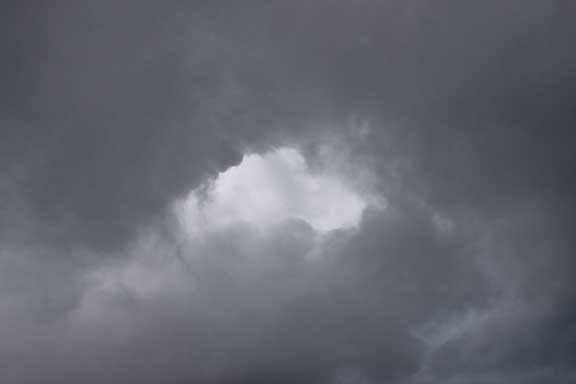 We’ve been anchored at the head of a four mile long fiord which runs in a north/south direction. This means that we have a long fetch for the southerly quadrant winds accompanying today’s cold front to work up a bit of chop.

But it is not the waves which have us concerned. It is the rocky lee shore against which we are now backed up. Even though the anchor is set hard, we prefer a more protected situation. If the breeze stays in the mid-twenty knot range, as forecast, we are OK here. But at these latitudes, with the surrounding terrain occasionally mixing stronger winds aloft with surface winds, we decide to investigate the other two arms of this short fiord complex. 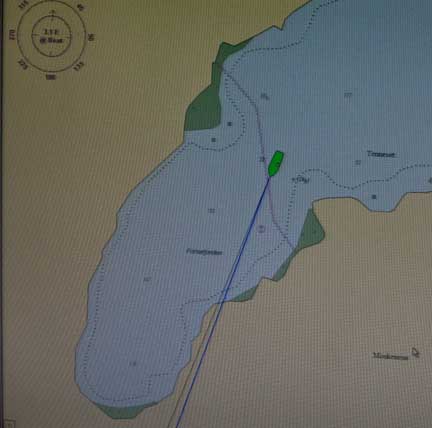 Here is the C-Map chart detail for the southwest facing arm. It is mostly 165 to 330 feet (50 to 100m) deep. But one can often find uncharted moraines with water shallow enough to anchor in these fiords. 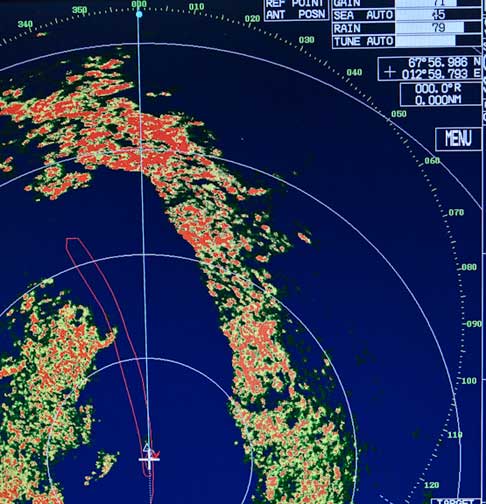 Radar will sometimes give hints of what is below the surface from the shape of the terrain. Note the land projections on both sides of us. 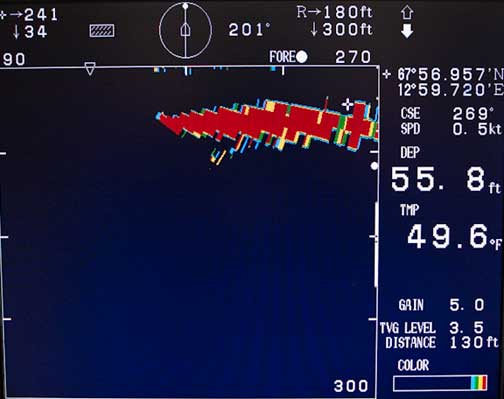 The depth finder indicates a shallow spot between the points shown on radar, but is the area sufficient for anchoring? We switch the sonar to vertical mode to find out. The photo above and those that follow have the sonar on the 300 foot (90m) range. The sonar is scanning forward in the first photo. This shows us a nice flat spot which goes at least 270 feet (80m) from our sonar antenna forward (the sonar antenna is represented by the inverted triangle to the right of the “90” upper right corner). The upper edge of the red image represents the bottom. 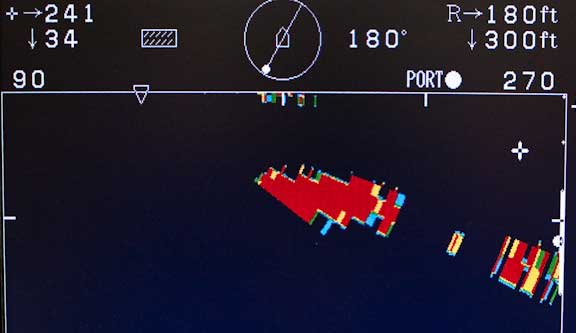 Looking behind the boat now. Note the drop off which starts at about 200 feet (60m). If the anchor were set in this area it would not hold nearly as well with the wind from the southwest due to the angle of the bottom and the anchor pulling downhill (but it would hold better with north quadrant winds pulling the anchor uphill). One thing to keep in mind is that the distances are from the antenna. Our sonar antenna is located just forward of the water tight bulkhead, so it is about 68 feet (21m) forward of our stern.

A final sonar look towards the land abeam to port. The shelf on which we are anchored is flat through the 300 foot (90m) range at which we are looking. 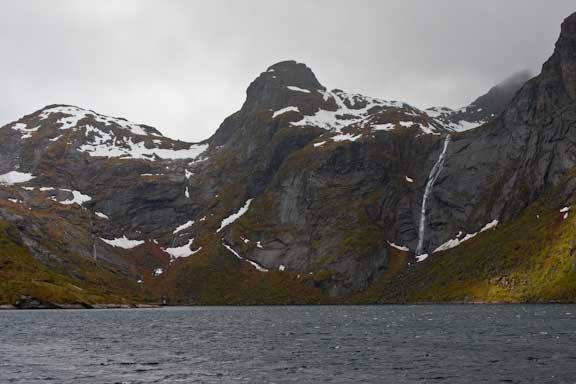 It may be a gray, squally day (puffs are coming off the mountains to 45 knots), but the surroundings are sure nice to view. 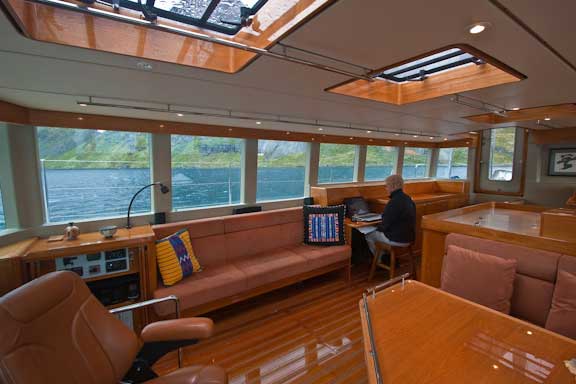 There’s no shortage of things to do. Our Telenor broadband system while costly to use compared to wifi, has wonderful coverage. So we are able to catch up on mail, take care of communications about the FPB64, and send in blogs like this. 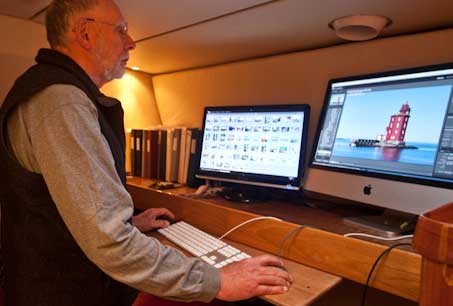 We’re at work in the “office” where the upper sea berth has been converted to a desk. The Imac is used mainly for photos, and run in Windows emulation mode for AutoCAD and other design software tasks. 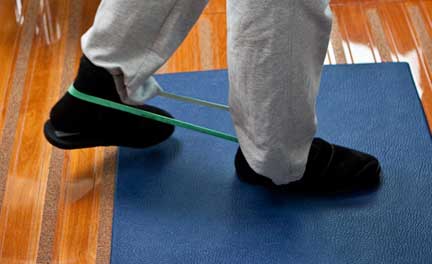 We’ll both get in a short workout. We have a variety of bands and a few free weights. The bands can be attached to different handholds and actually do an excellent job. 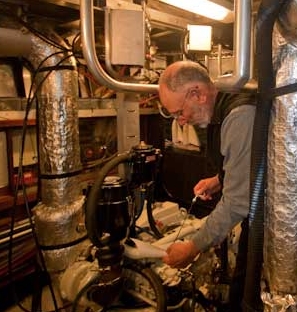 There are no projects on the “To Do” list, but the engine room still gets a quick check. 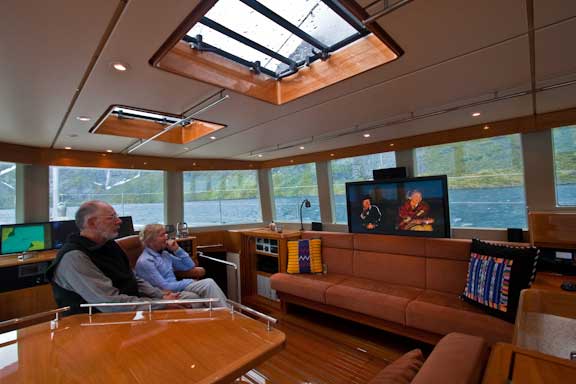 And if it stays dark and gloomy we can watch a movie later. 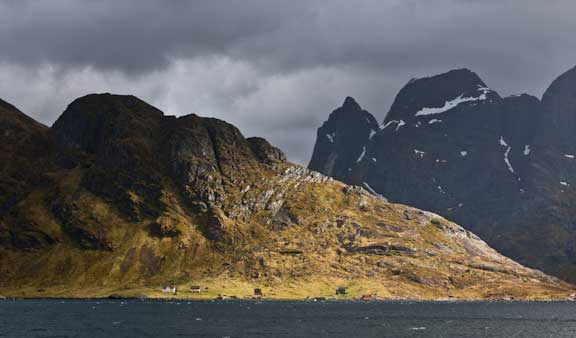 But right now the sun is teasing us, so we are going to stay focused on productive endeavors (or at least eat lunch and enjoy the scene playing outside our windows).

This entry was posted on Monday, May 25th, 2009 at 5:07 pm and is filed under Dashew Logs. Both comments and pings are currently closed.