“That day, in those conditions, it was the only boat I would have wanted to climb aboard to face the English Channel.”
–Motor Boat & Yachting Magazine 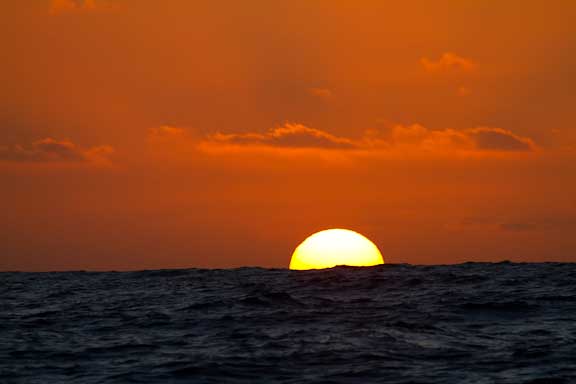 Given the wonderful sea and wind conditions we’ve had on the passage between Gibraltar and the Canary Islands you may find our fixation on having interior spaces and handrails optimized for rare negative events puzzling. We’ll let the photos in this blog, all taken within a 12 hour span, speak to the subject. After reading this blog if you would like to see high res full screen photos of the waves there is a link at the end. 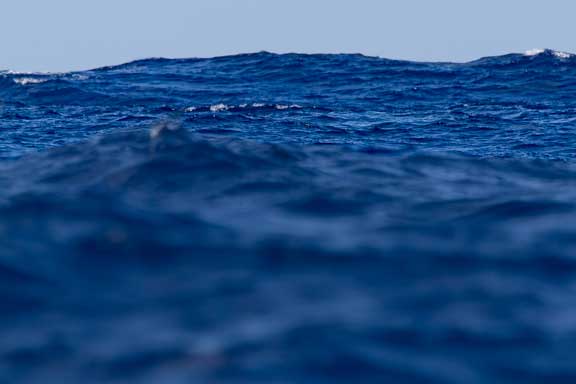 First some background. Waves are running six to ten feet (two to three meters), at eight to fourteen second intervals. They are for the most part nicely shaped, there is no adverse current humping them up, and no crossing sea patterns. The breeze is fourteen to twenty knots. Very pleasant conditions indeed. Now look at the sea in the background of the photo above. It is probably half again as big as the “normal” waves with a slightly steeper wave face. Encounter this in the wrong way and the boat will react, even a yacht as powerful and stable as Wind Horse. Because seas like this are transitory in nature, you never know where or when they will occur, or what the vessel’s position relative to the wave will be, you want your furniture to constrain your body as much as possible, and to have lots of places to instinctively grab when you feel the lurch starting. Keep in mind that there will often be a crossing set of waves from a different weather system that will occasionally interact with the local waves to create larger and irregularly shaped seas. These are sometimes the cause of “sneaker” waves about which much has been written. 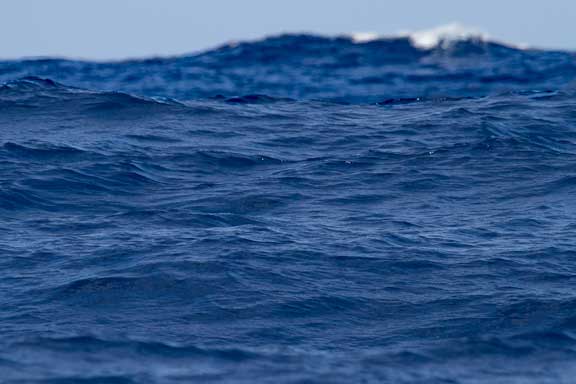 Check the out of focus wave crest in the background. 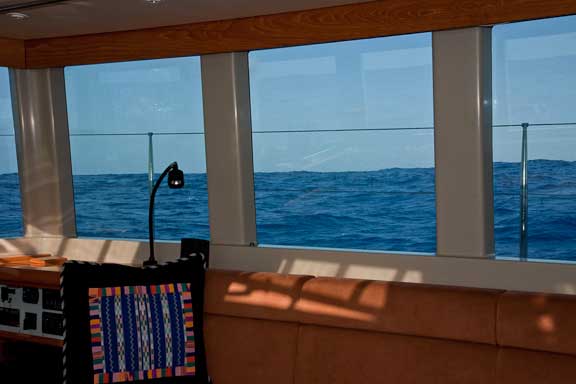 With the next series, taken inside looking out, carefully study the seascape. There are lots of hills and valleys, and a few mountains and ravines. 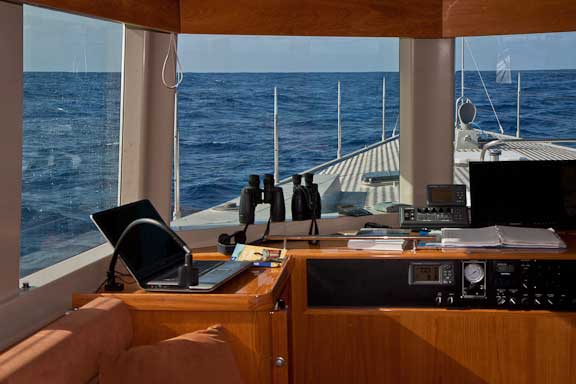 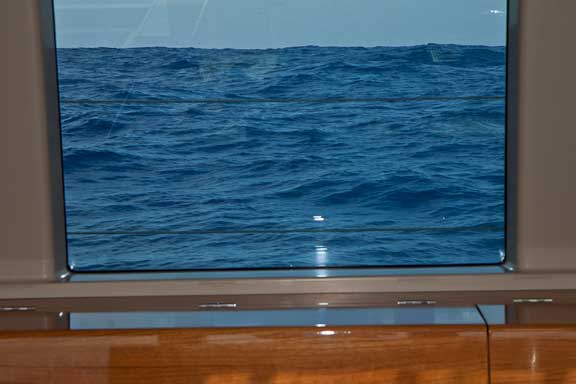 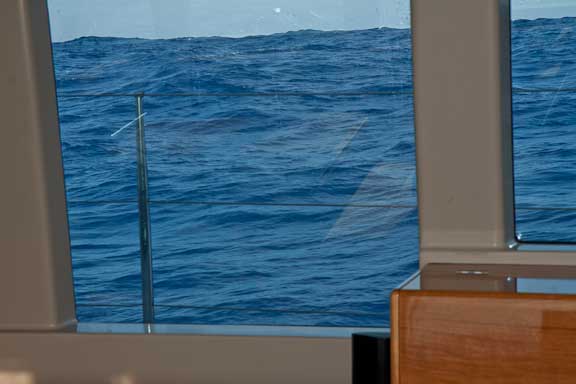 Now lets use a frame of reference for wave size. 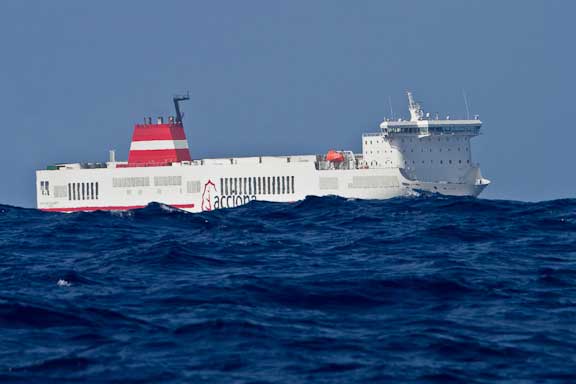 This is a 200 meter (660 foot) ferry doing 25 knots taking the seas on the port forward quarter as they pass us. 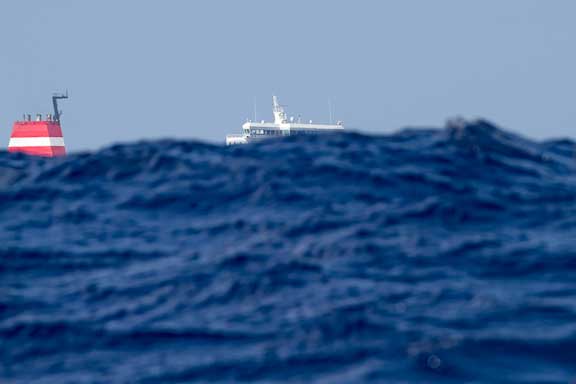 We have cherry picked the photos to show the worst of the seas and the fact that she is almost hidden from view on this lovely day puts things into perspective. 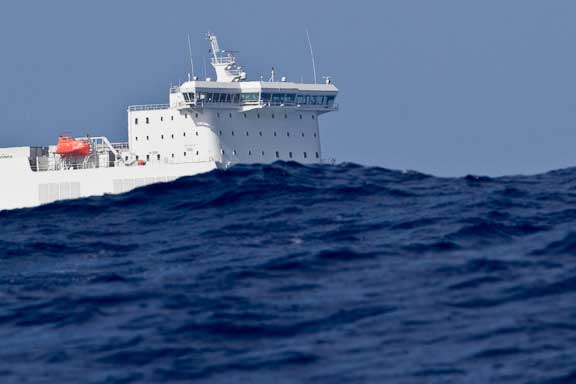 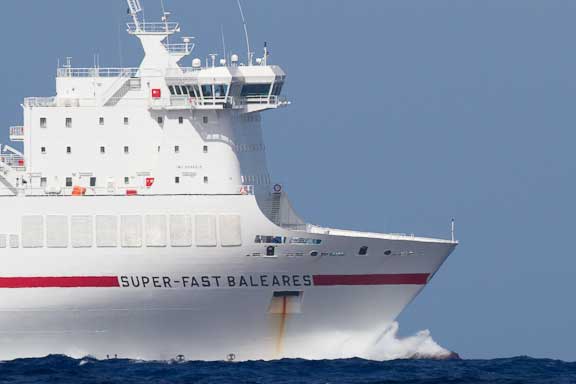 OK, now a different comparison (below), this a mega yacht photographed with a 500mm lens at a distance of three miles. 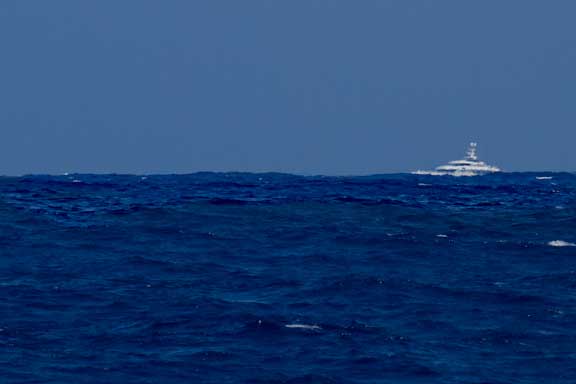 She is doing 14 knots, and we’d guess by that she is 80 meters (250 feet), which makes her hidden deck edge forward probably six meters (20 feet) off the water. 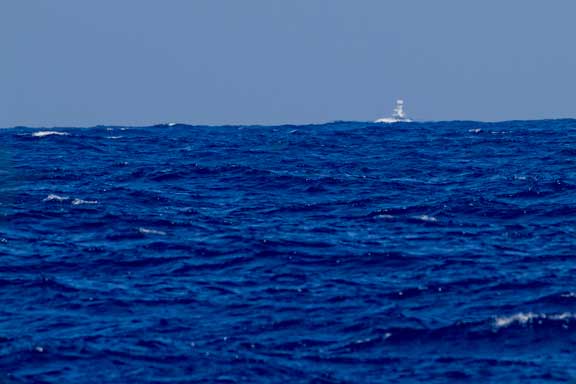 Maybe double that  height for the tallest deck (she was not running her AIS hence the need to guess). 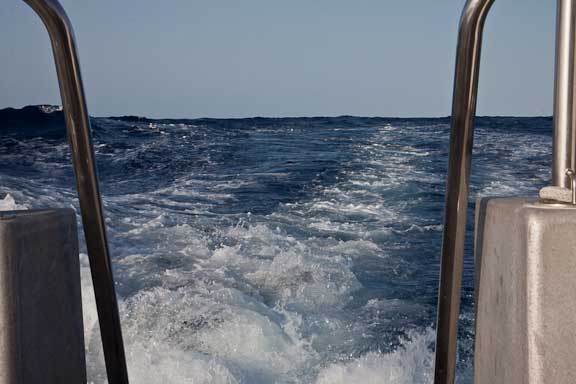 Back onboard our own vessel. Check out the crest in the upper left. 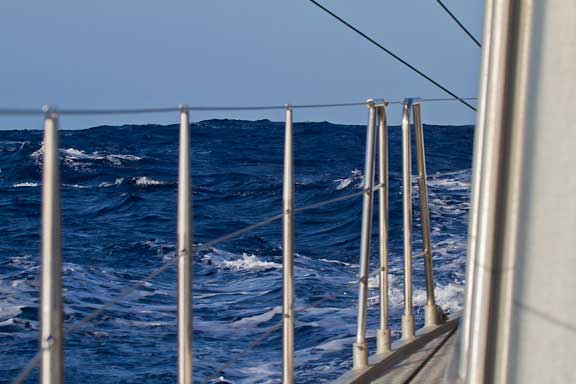 Center here in the background. We’ve got a nice surf coming if this one catches us right. 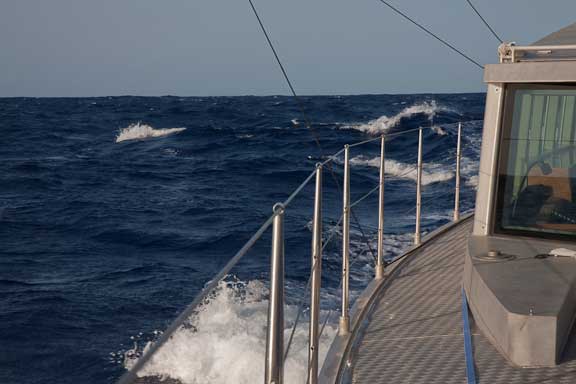 Top center right note the crest. The same mechanics which create this wave could build something much larger. 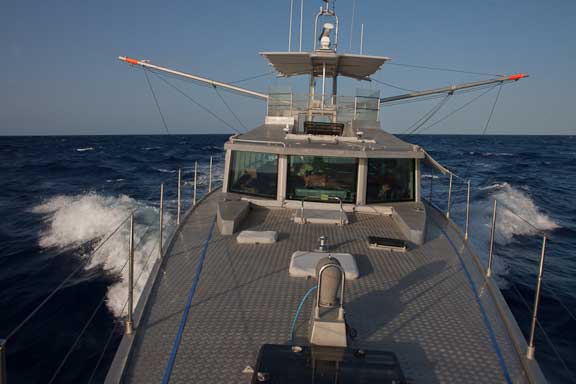 This one is for fun, surfing of course. 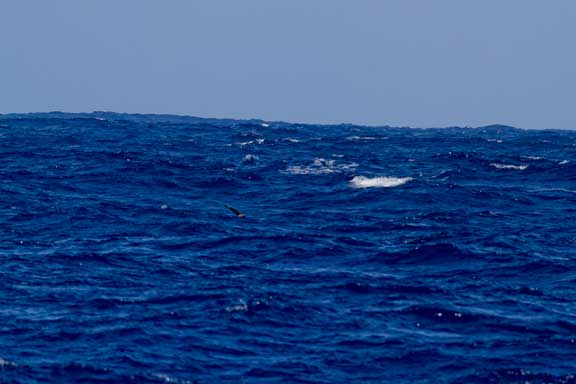 Look at the crest across the top. 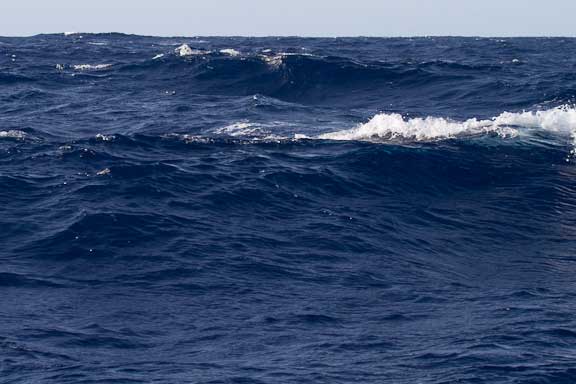 There are three waves lined up here  running from the lower right to upper left, and although they  look small these are the same six to ten foot (two to three meter) waves we’ve been seeing (the upper left perhaps being somewhat larger). Bottom line, if you are serious about heading offshore the interior and deck design tradeoffs need to be oriented towards much worse conditions than these. Thought needs to be given to moving about with one or even both hands occupied. You may be clearing table and have two hands on the plates, or walking with a camera in one hand. Grabrails should be placed where it is instinctive to reach for them. Low furniture can be used to constrain leaving the sight lines open. With care, the interior can retain an open feeling, and the deck look cool and uncluttered. Those who know the sea will appreciate the approach and quiet approval will be forthcoming. To view these photos full screen click here. 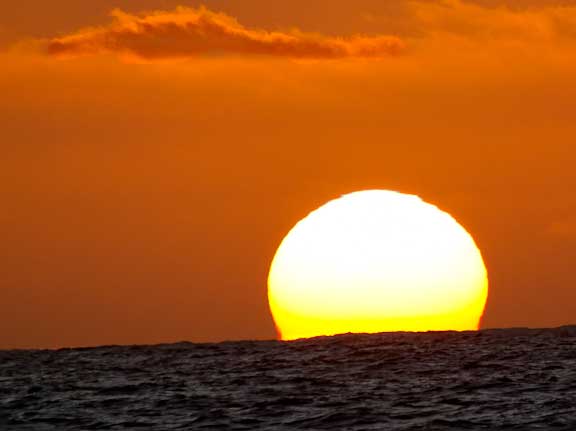 This entry was posted on Saturday, October 2nd, 2010 at 11:46 pm and is filed under Dashew Logs. Both comments and pings are currently closed.