Sundeer 64 Cutter Szél – A Blast From The Past 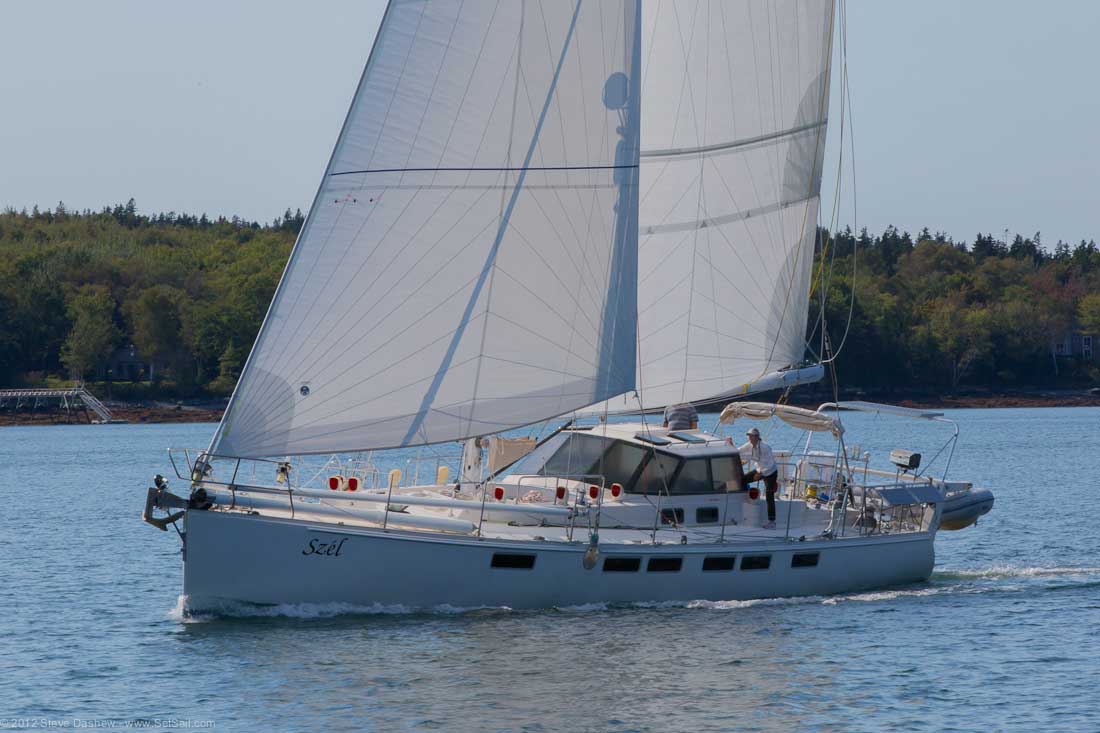 We were cruising down Maine’s Eggemoggin Reach, having a Skype conversation with New Zealand regarding the exhaust system on the FPB 97, when we noticed a cool looking roach profile heading towards us. Having just spent several invigorating days watching working schooners with gaff rigs and topsails, an early platform not too far from the most modern high roach mainsails, we thought “Wow, look how similar these are.”

As the profile drew closer it turned into a rig we knew well, the Sundeer 64 cutter. This was the yacht we’d earlier noticed moored in Smith Cove, a sistership to Raven. 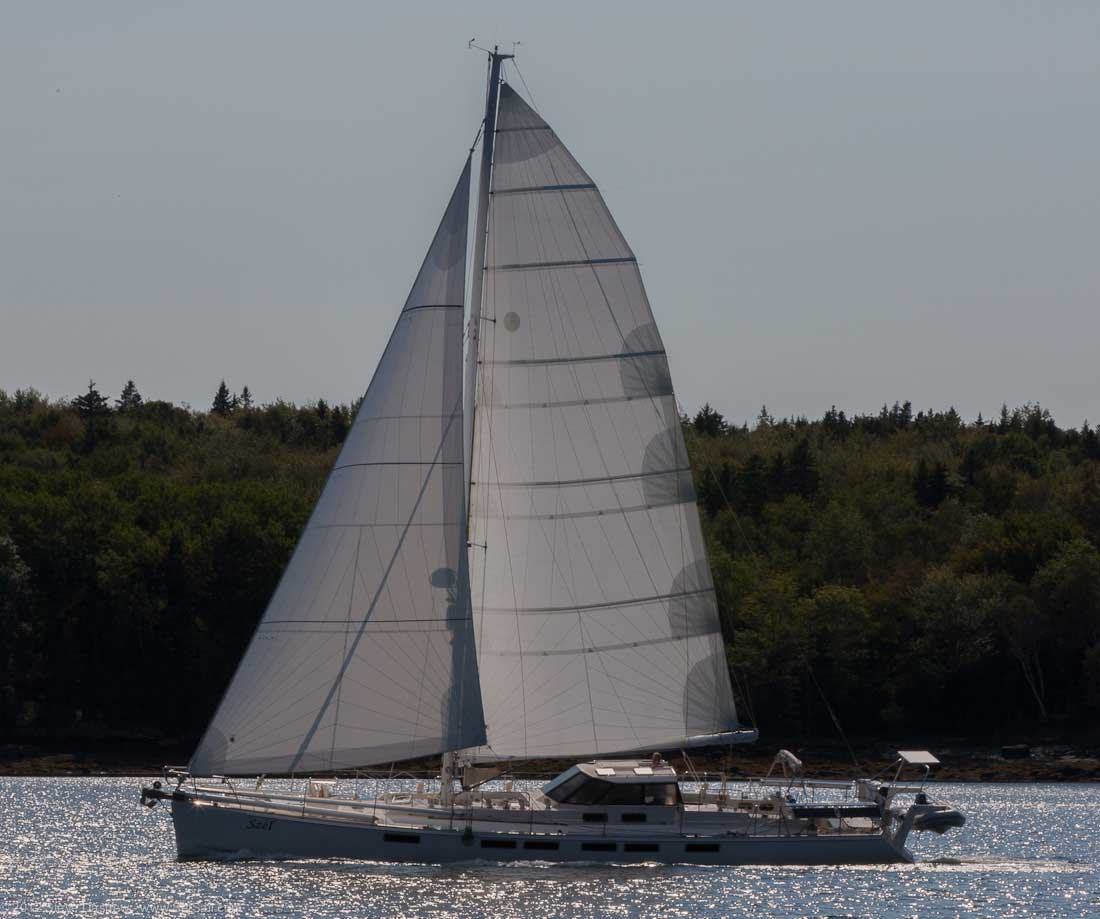 Designers, builders, and some owners often confuse rig height with performance. While this may hold true on race boats, in a cruising context the much more important issue is figuring out a size and configuration that will produce the most miles with short-handed crew. Our yachts have always made very fast passages on average, precisely because it is easy to keep them moving at a relatively fast pace. This Sundeer 64 rig is a classic example of this philosophy. Although vertically challenged, it has a very powerful combination of sails, one that allows its crew to keep pressing comfortably as the breeze builds. 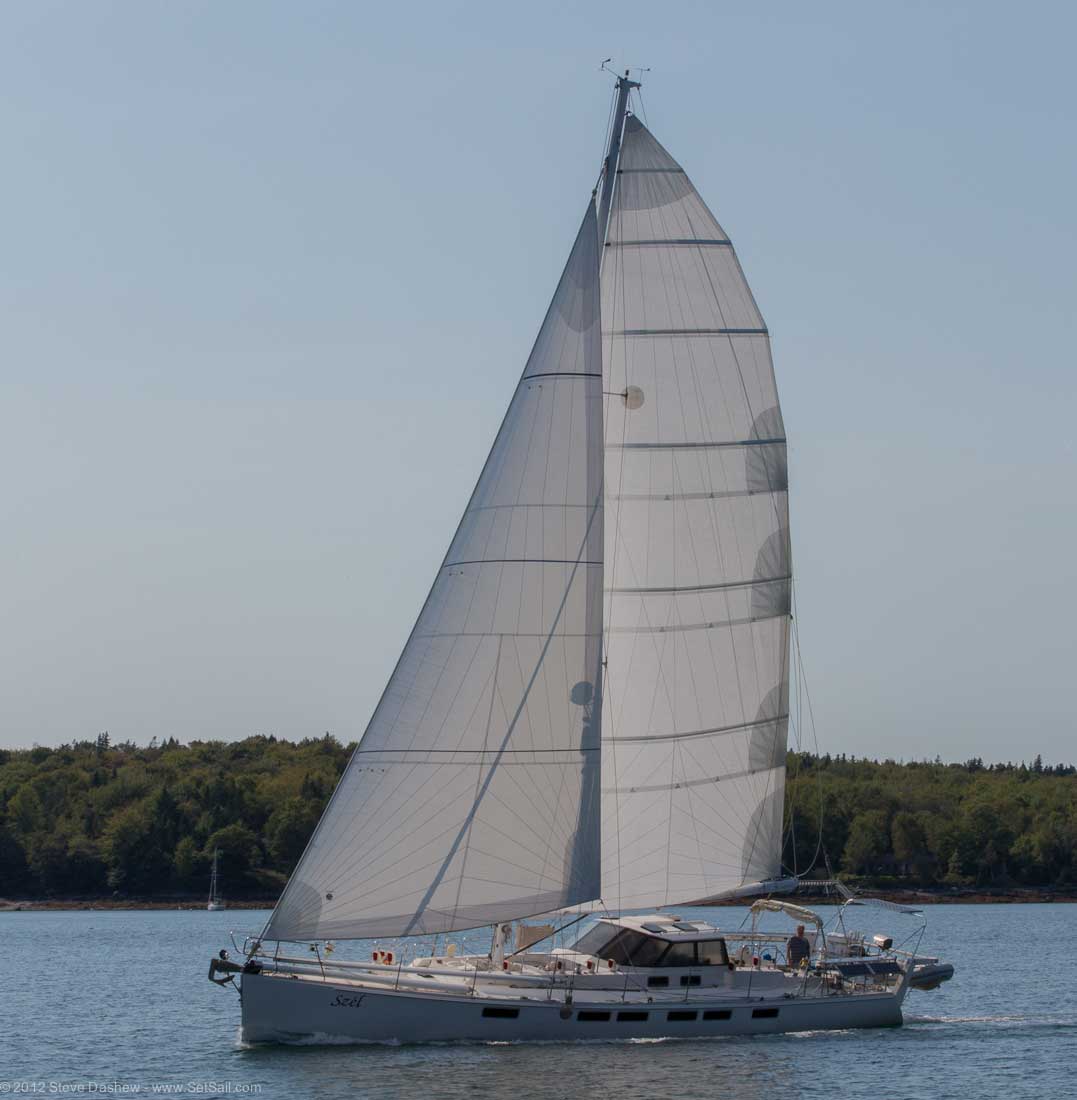 The big main, with its aggressive roach, has a much cleaner distribution of area, hence a high effective aspect ratio, than is the case with the near triangular shape of a typical rig and platform. This leads to significantly reduced induced drag, and proportionately improved drag angles and lift vectors. All of which leads to less loading of keel and rudder, less heeling, and much better VMG. 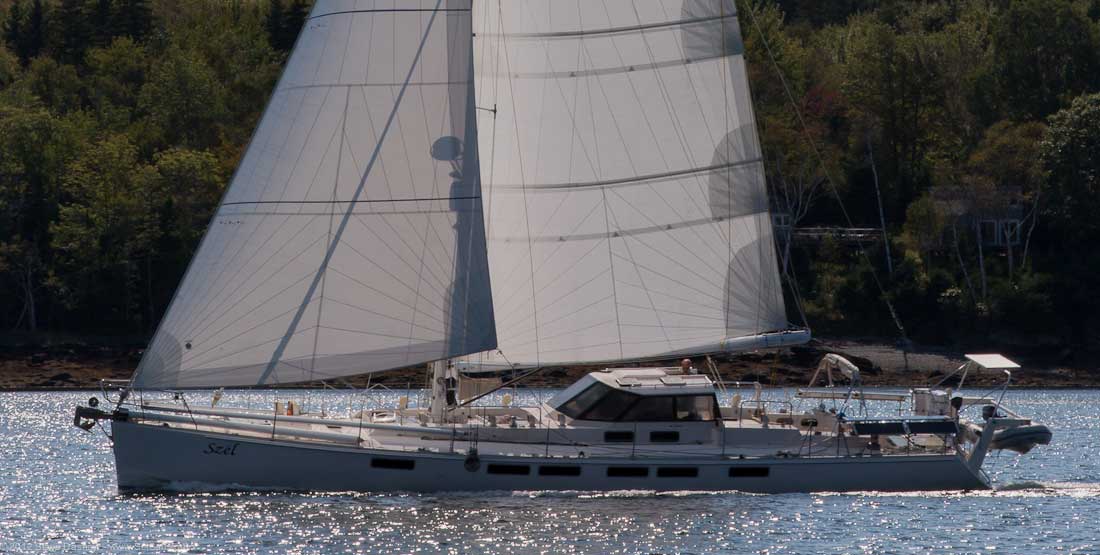 There is function, of which rig efficiency is a big part. And then there are aesthetics, which for us is a combination of shape and their relative efficiency. We like this profile, a lot. It has a simple, clean look to it. 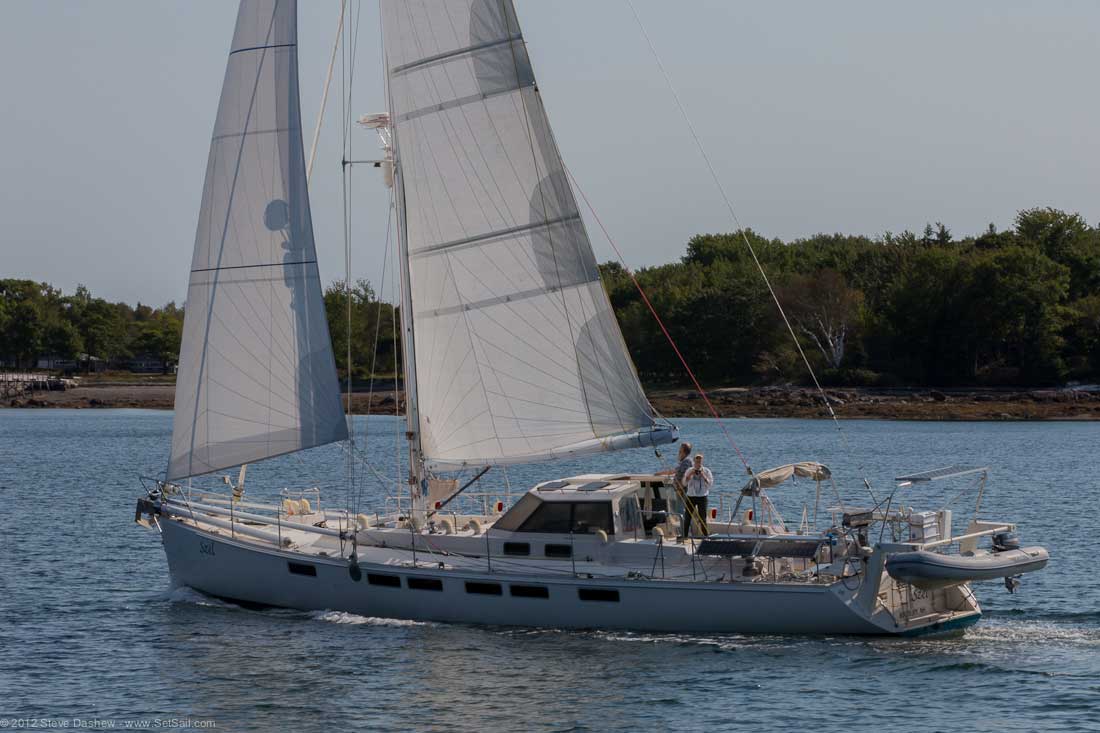 We’ll leave you with a few more photos. 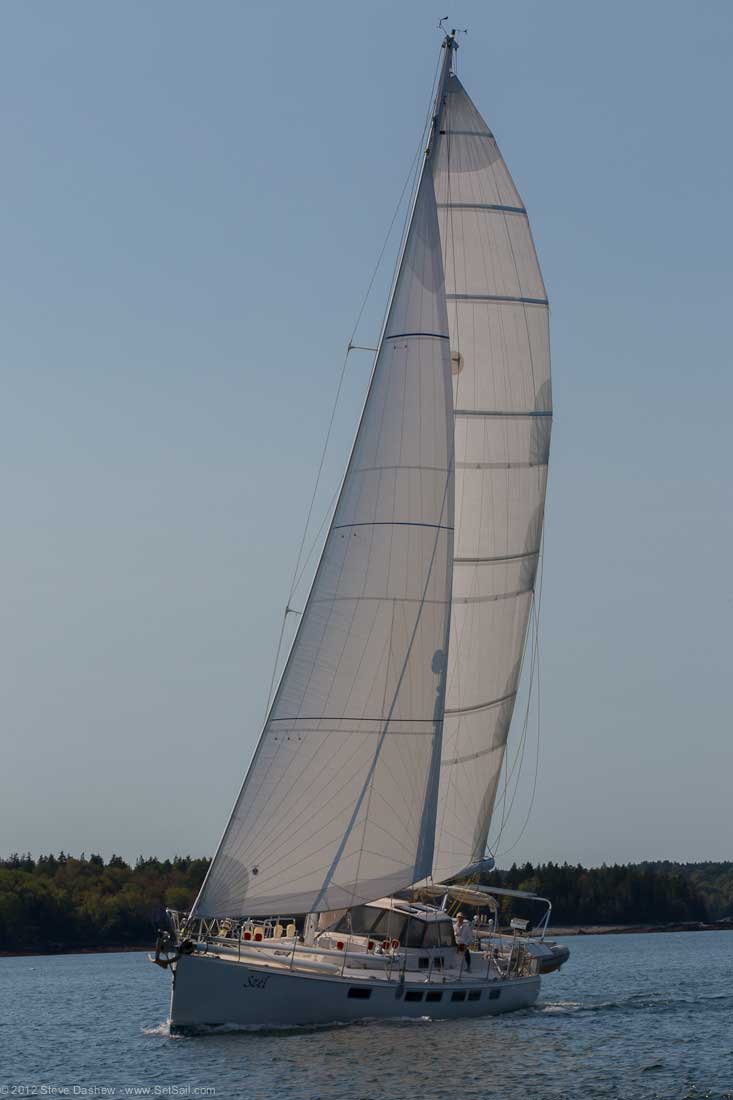 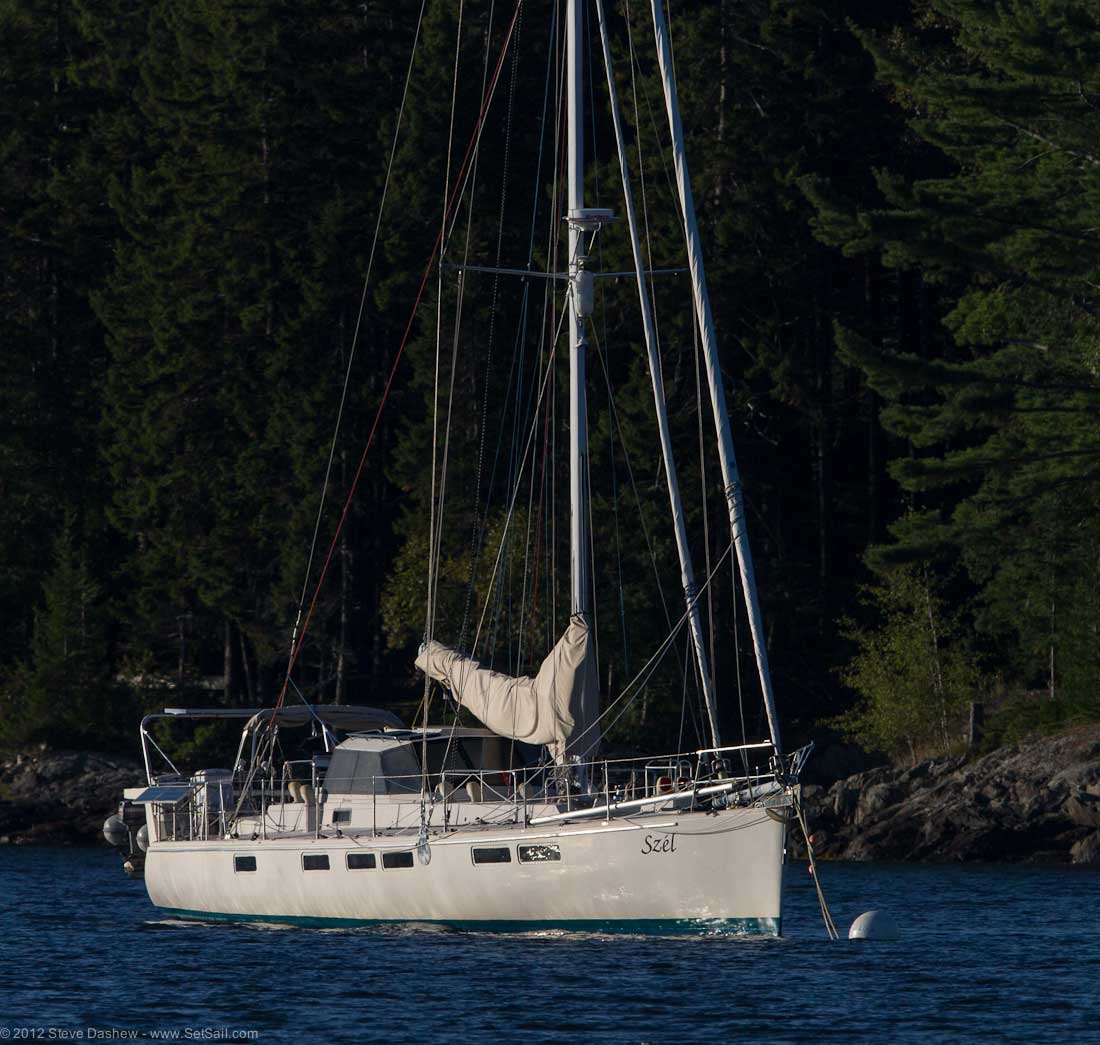 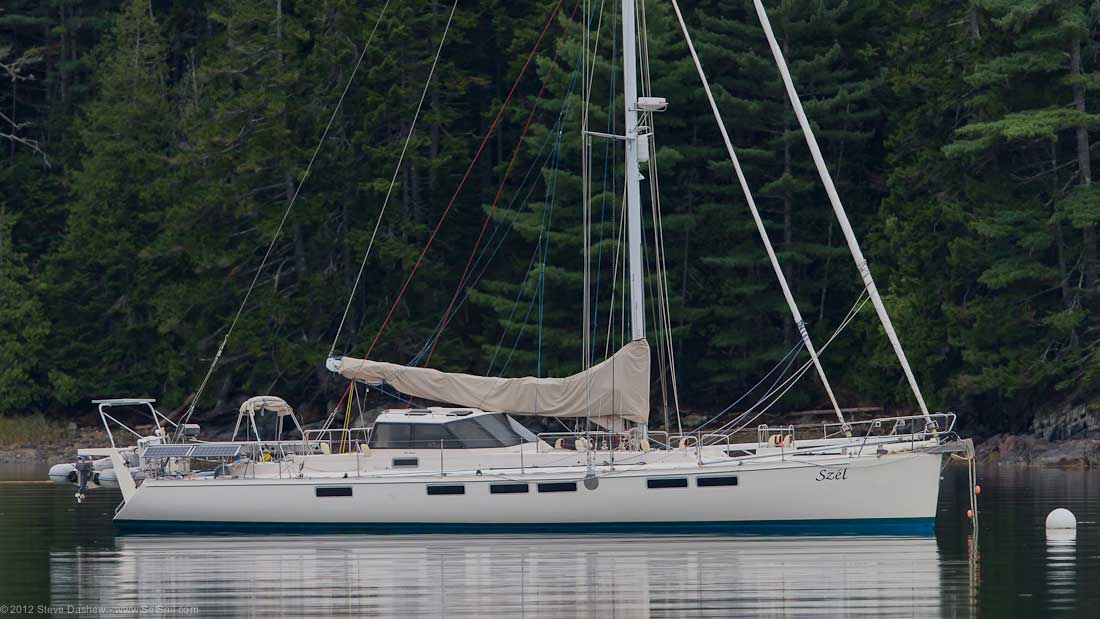 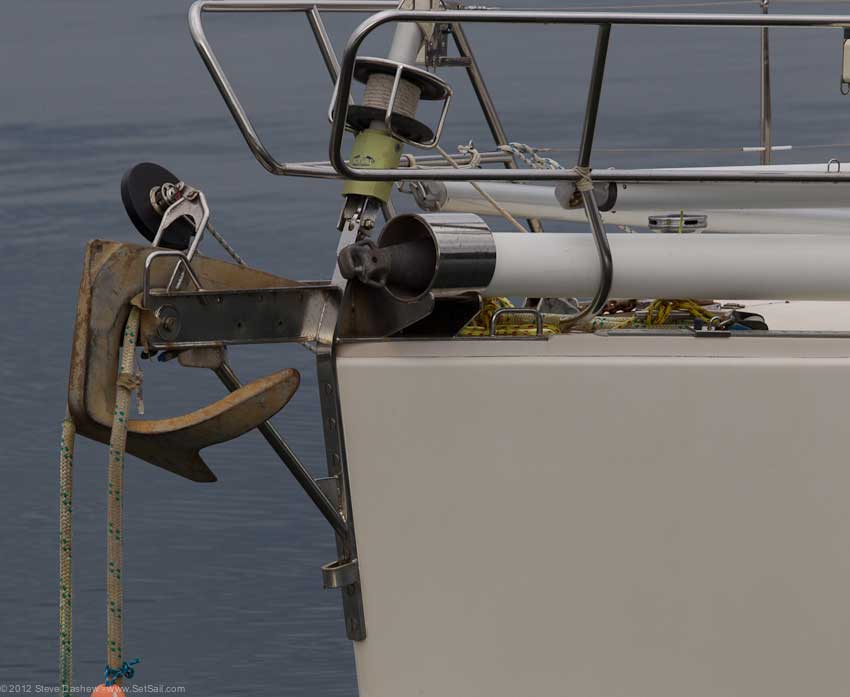 Finally, a word on anchor sprits/rollers. This design was put to the test during a major hurricane when a Sundeer 64 ketch was at anchor on one of the southern bays of Grenada. She was one of the few vessels to actually stay on her anchor, giving us some excellent engineering data on not only the sprit, but also the heat-treated high test alloy chain and chain stopper.

This entry was posted on Monday, September 17th, 2012 at 8:57 pm and is filed under Dashew Logs, Dashew Offshore History. Both comments and pings are currently closed.