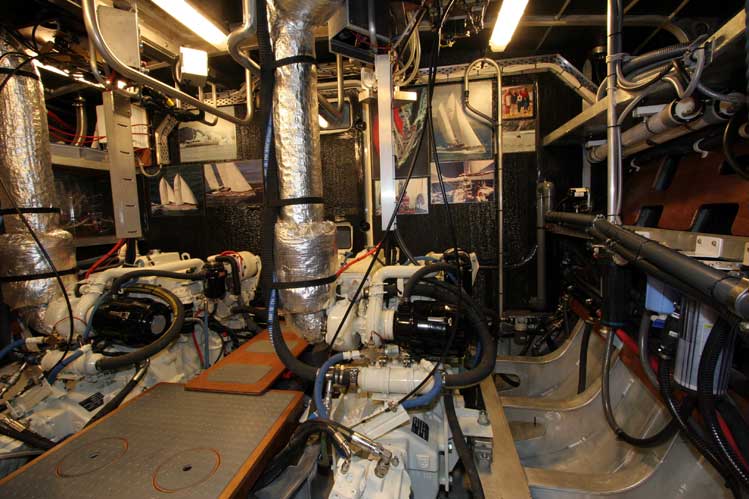 The heart of any cruising vessel – sail or power – is in its systems. It is the systems that bring you ambiance and pleasure (and, if not done correctly, a load of frustration).

Most of what we’ve done with the FPB Series boat is based on what we’ve developed on our sailing designs. We have quiet, efficient, easily maintained systems. We are able to sit for long periods at anchor without charging the batteries. And there is sufficient redundancy to insure we don’t have to alter our plans due to maintenance problems. At the same time, we have worked hard to keep the systems – electrical, plumbing, HVAC, and drive line – as simple as possible.

There are a couple of key ingredients to all of this. The first is space and access.

If there is adequate space in which to install the systems, they go in more easily. We can then keep an eye on them on a periodic basis. Being able to inspect on a regular schedule means we are able to catch problems at an early stage – when they are simple to deal with and before they mutate into something more serious. Space also means that the systems are less costly to maintain. The photo above is taken from the starboard aft side of the FPB 83 engine room, looking forward. We have total access to all four sides, and below the engines.

The second ingredient is proper installation. We’ve learned the hard way that there is a right and wrong way to do electrical, plumbing, and mechanical work. Double hose clamps, for example, and an absolute must on anything below the waterline, pressurized plumbing, and the heating systems. We install component in such a way that it is safe from most drips and sprays. Electrical equipment is isolated in almost all cases. Double pole breakers are used on all DC circuits, and isolation transformers are used with shore power. This list could go on and on.

The photo above shows the high powered DC circuits, alternator diodes, fuses, and fuel pump control circuits. All are behind a sliding clear plastic set of panels to protect them, typical of the way things are done on our designs.

And then we come to the concept of simplicity. A simple boat is a relative term. When we first started cruising on our 50 foot (15.3m) Intermezzo, she was considered a complex boat. She had mechanical refrigeration, radar, an engine, depth sounder, and wind speed and direction instruments. There was also a small hot water heater, which ran off the engine, and a pressure water pump. Our instinct was to toss most of this stuff, including the engine, to turn this complex boat into a simple one.

Today, our definition of simple has changed considerably. Take Beowulf. She had a full suite of electronics, including two computers, a lovely diesel heater, refrigeration of course, domestic hot water, two small water makers, a combo washer drier, even a central vacuum, DC genset, inverter, and a controllable pitch propeller. And she is, relatively speaking, a simple boat. In fact, we spent a lot less time on systems related maintenance on Beowulf than we did 25 years previously on Intermezzo.

With the FPB Series we’ve got even more stuff. However, between the engine room and basement, there is plenty of space for the installation, and that the additional gear contributes to enjoyable cruising. And most important, our “to do”, after the first 25,000 miles of shake down, is very short.

This entry was posted on Thursday, October 20th, 2011 at 1:46 pm and is filed under Dashew Offshore, FPB 83. Both comments and pings are currently closed.