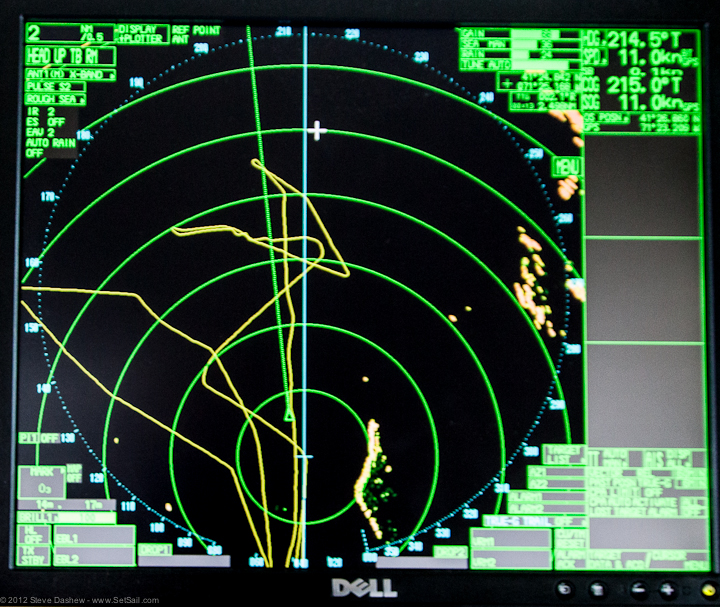 We’ve been out the past few days, testing the latest NAIAD stabilizing software on Wind Horse. We’ve had 20-to-30 knots blowing straight into Narragansett Bay with opposing and slack current, so a variety of sea states: from steep to “holy cow, look at that!”  As you can see by the track above, we have been taking the waves at all angles, from dead ahead, to on the stern, and everything between. At the end of this post there are a couple of short videos. 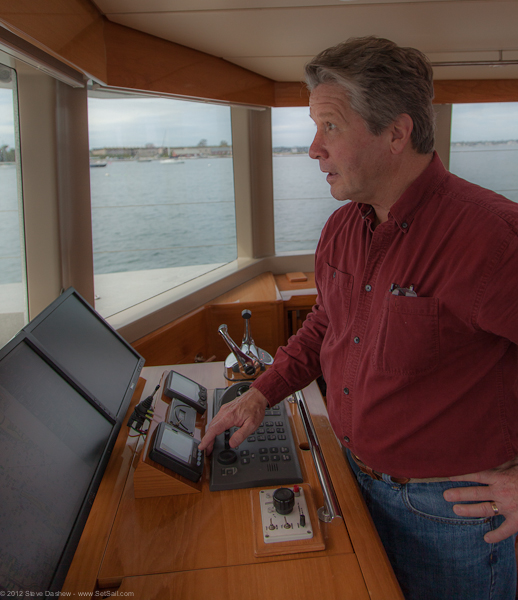 Don Redding has flown out from NAIAD’s Seattle office, to work with us on probing the new software. This is the first time we’ve had a stabilizer guru on board one of our FPBs in difficult sea states. First, we want to zero in on the most comfortable settings for Wind Horse in the automatic “Adaptive” mode. Second, we want to find the best operator adjustable values in the “At Sea” mode. Once we have Wind Horse optimized, we can use this data to fine tune the settings for both the FPB 64s and the new FPB 97.

There are five “terms”, or adjustments, which control the reaction of the NAIAD system under way. We started out with these as they had been before, the result of a year and a half of messing about after Wind Horse was launched in 2005.  We then ran at different angles into, abeam of, and away from the seas, making an adjustment, and then doing another cycle of runs. At the end of this process, we are pleased to report that in those conditions Wind Horse was more comfortable than she had been prior to the start of these adjustments. Given her already superb motion, this was a pleasant surprise.

In the first video we are heading into the seas at a slow (for us) speed of six knots. Previously it was more comfortable to maintain normal cruising speed rather than slow down, but as you will see in the video, this is a very pleasant mode of heading uphill.

The next series of tests were done with seas on the beam and stern quarter. You will see a variety of settings being tried and the results – clear but subtle in the video – are felt much stronger through our feet and on the G-meter between our ears. Note how the motion smoothes out when we go from slow to normal cruising speed, an example of the advantage which boat speed brings. We are continuing these tests and will report in due course.

This entry was posted on Saturday, October 6th, 2012 at 1:39 pm and is filed under Dashew Logs, FPB 83, FPB Series Notes, FPB-83 Videos. Both comments and pings are currently closed.