Testing The Underwater Exhaust In Various States Of Trim In Preparation For The FPB 97: Motion Impact 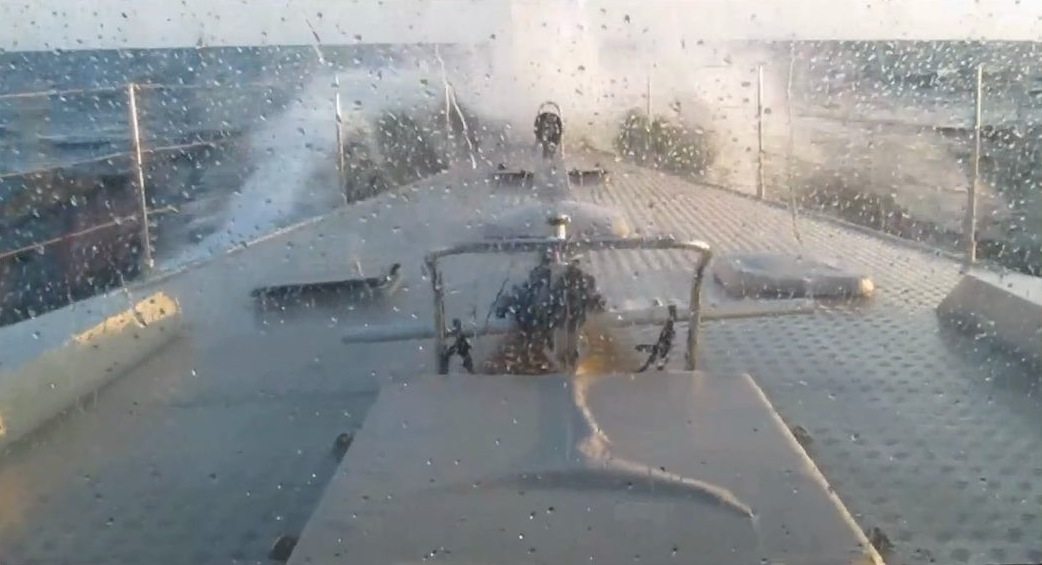 One of the most difficult design aspects to get right is an underwater exhaust. Powerboat builders and designers have been wrestling with these issues for years, and nobody–let us repeat that, nobody–has a pat answer. With conventional motor yachts, there is so much horsepower involved in propulsion that exhaust noise is a major issue. Add in engine rooms that are almost always near the center of the vessel, and the need for–and difficulty with–an underwater exhaust multiplies.

In our case the options are easier. We have very small power requirements, so noise and vibration are minimal. The engine room is all the way aft, so the noise is isolated from the living quarters. The aft location coupled with small engines and big rudders makes it possible to place an underwater exhaust, if indeed it is warranted, behind the prop(s) and rudder(s). This eliminates the inefficiencies that occur when you are injecting exhaust, and the related turbulence, ahead of the propulsion/steering foils.

In the case of the FPB 97, we have a scale model in Wind Horse with which to experiment, which is what we’ve been doing of late. We have set her up with extra payload, so that hull immersion forward and aft is closer to the FPB 97. In the case of the underwater exhausts, this affects the imersion of the exhausts, and how they sound during various sea states.

At the same time, this gives us data on the behavior of the canoe body in unusual (for Wind Horse) load conditions. There are some factors we’ve been studying that point us in a certain direction, and we are testing to see how these work. Changing the trim, moving fuel/water forward or aft to immerse or raise the stern, allows us to get an idea of how the FPB 97 might react.

We are a ways from finalizing things…there are still some configurations to test, but we are zeroing in on a decision.

In this video Wind Horse is carrying full fuel and an extra 4 to 5 tons of water. She is right on 100,000 pounds, about 45 metric tons, about 10% over her normal maximum gross displacement. The breeze is in the low-to-mid 20 knot range, seas are right on the nose, and she is running at 1900 RPM, averaging her normal 11 knots through the water. (To see the video larger size, you can view it at our smugmug page.)

The camera microphone picks up a variety of background sounds, and to our surprise, you can hear the clothes dryer going, and Linda clinking dishes as she works in the gally. Engine sound level is quite subdued, and you can listen for tonal variations on the underwater exhaust that might be occurring as a result of the heading, seas, immersion of the exhausts, etc.

The video is one long shot, no cuts or edits, so that you get an accurate sense of motion, sound, and ambiance, without a series of cherry picked sequences.

Occasionally you will here a thump as the fluke of the oversized Rocna anchor drops into the sea. In these conditions we doubt the anchor on the FPB 97 would ever touch, as she has significantly more freeboard forward. The deadrise angle–the cross sectional shape–of the FPB 97’s hull is more like the FPB 64: i.e. softer riding than is the case with Wind Horse.

We have a bit of surfing footage as well, which we’ll post in a few days.

This entry was posted on Monday, August 13th, 2012 at 8:42 pm and is filed under Wicked FPB 97. Both comments and pings are currently closed.


4 Responses to “Testing The Underwater Exhaust In Various States Of Trim In Preparation For The FPB 97: Motion Impact”