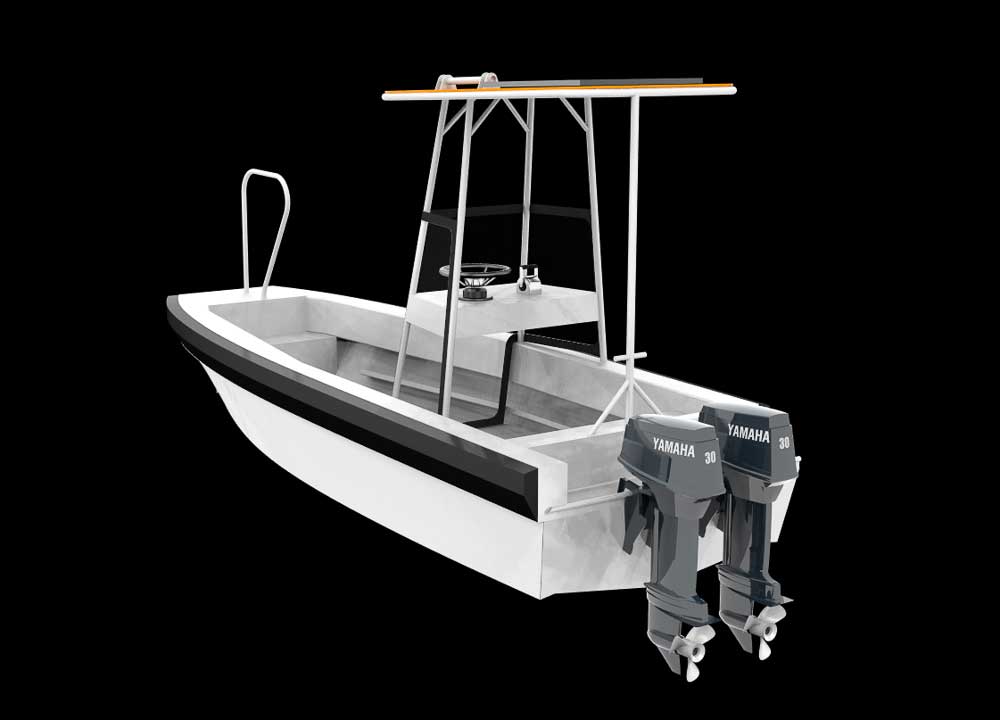 A couple of weeks ago, we invited suggestions for an ultimate rugged cruising dinghy. We appreciate all of you who took time to shoot us your ideas, of which there were many. What you see here and following is our adaptation of some of those, plus a few of our own, into a concept dinghy.

We will start with the engine room. Amongst the Dashew Offshore team there were those that lobbied for a single engine with second trolling engine, and some who favored twins. Single engine proponents argued fuel is always a likely culprit, and that bad fuel would get twins as well as a single engine, so why not pick up a few points in efficiency.

John Henrichs, the master of FPB64-5, Tiger, and a very experienced dinghy hand, had the winning observation. The problem with outboards is rarely fuel, and that is controllable by the operator through modest diligence. Rather, reliability issues usually surface in the cooling system. An impeller goes, or a port becomes blocked. In this case (or any other which causes true loss of an engine), one of two equal sized outboards give you the ability to get home at a good clip.

A pair of  30HP Yamahas are shown, and hopefully we can find two stroke outboards, as they are lighter, less costly, with service techs around the world…

The console and T-top present numerous challenges and trade-offs. The biggest of these is coming alongside an FPB mother ship with our large topside flare angle aft. The arrangement is offset to starboard allowing more clearance to port, on the assumption that the normal docking relationship with the mother ship would be parallel docking on the starboard side of the swim platform.

The T-top and spray shield will provide sun, spray, and some rain protection. If we were operating in the high latitudes we’d wrap a window around the upper portion to reduce wind chill.

We much prefer standing while driving. It gives you a better perspective, and allows your legs to act as shock absorbers.

The T-top framework would be used for lifting the dinghy on deck. A short pennant over the CG could be easily reached from deck level, without having to drop into the dink or fiddle with a boat hook.

The console has room for a chart plotter/depth sounder combo and a bit of camera gear. There is room for three of the 20L fuel tanks under the aft deck, with seating for a couple of guests. The staple rail running across the back of the boat is to assist guests with getting into and out of the dinghy.

It will not be easy to climb out of the water with this dinghy, so we have made allowance for a boarding ladder. This will stow vertically, when ready to deploy. We are going to try to work the details so that when not diving or snorkeling from the dinghy the ladder can be removed and stored somewhere aboard.

You will no doubt have noticed the tent for crew protection if the dinghy should be used as a life raft, and to keep cargo dry.

The idea is to have the port side attached to the gunnel with a bolt rope in an awning track extrusion. When not in use, the awning/tent is rolled up and stored on the gunnel. The extrusion continues around the bow and back down the port side. Into this is a narrow section of bolt rope with fabric, a zipper, and Velcro flap.

To set the tent up should not take more than five minutes, and the flap a few seconds. That is it for NewDink 2.0. We welcome your further input.

This entry was posted on Monday, May 13th, 2013 at 3:53 am and is filed under Dashew Logs, three. Both comments and pings are currently closed.