The Dinghy Conundrum – What Is The Correct Mix Of Factors? 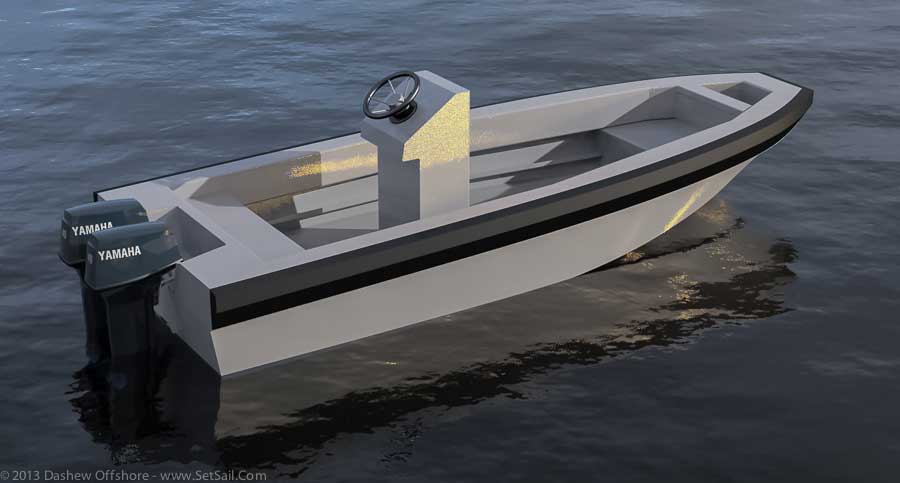 We have recently been asked our ideas for the ideal mix of design factors for a larger FPB dinghy. This got us to thinking about our own experiences, and what we would want in this category of gear, if we were starting from scratch. The comments that follow are based on the assumption that the dinghies will often be used in cruising areas off the beaten path. In this post we will share a few thoughts, and ask for yours.

When we were designing the dinghy for Wind Horse we obsessed at length over weight and being able to drag the boat up a beach. We quickly came to the conclusion that there was no way we’d ever move it more than a half a boat length, even if we cut the weight by a third or more. This lead to the understanding that we’d need a beachable dink to compliment the bigger dinghy. Our Gig Harbor sliding seat wherry served admirably in this context, and at 114 pounds/53kg, was easily dragged up the beach by the rower.

There are certainly lots of very light car-top aluminum dinghies on the market, and you may be wondering, why not use one of these? The answer lies in the type of service we want. The larger dinghy needs to be strongly built, able to take a pounding from running hard in chop, bang into the odd bit of ice, and find the location of rocks. Impact resistance requires more metal, way more compared to the car toppers.

The next issue is length, which directly relates to space on deck. There is a conflict here. You are playing off the space around the bow, and overhang of the swim step, against the benefits of a longer dink. For us that is an easy decision. Waterline brings with it efficiency, sea kindliness, and better steering characteristics. These pay such benefits in the dinghy that we will always opt for the longest dinghy we can fit, but still keeping beam more akin to the shorter design. 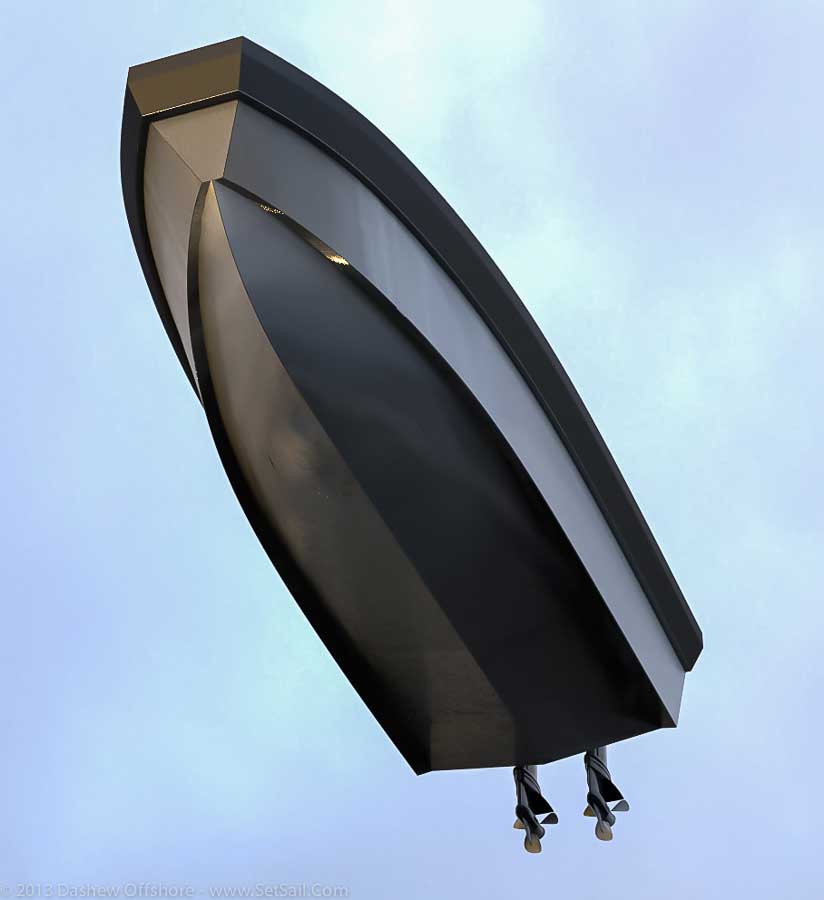 The boat shown in these renderings is  the standard Circa 13 foot dinghy, stretched by 25%, with beam held the constant. This results in a sleeker underwater profile forward, which translates to a softer ride. The added length brings with it more stability, and better steering. The LOA upgrade offers the option of employing more horsepower, and cruising faster. Sound familiar?

One of the things we want in a dinghy like this is a second engine, so that if the main outboard quits when we are fishing outside the pass of a Tuamotian atoll, or deep in some Greenland fjord, we have a means of getting back to the anchored mother ship.

There are two approaches here: one is a single large engine with a smaller outboard for backup and for use when fishing. Or, you can use  two smaller, but similar engines. There are cogent arguments on both side of the debate, but for us the answer is twin engines. We feel the loss in efficiency that comes with two outboards is made up for by the ability to move the dinghy at a good pace on just a single engine.

We are still working through the conceptual details and will fill you in as these come along. We anticipate building in a T-top to provide shade, with roll down windows to give a bit of protection in cold or wet weather. Our preference is to keep the area forward of the steering console clear, so that it is available for carrying gear, and keeps the deck space open should the dinghy be used as a life boat.

We’d want a couple of lockable storage areas for ground tackle and safety gear. And we would certainly need a built-in boarding ladder, to make climbing back aboard easier after a swim or dive off the dinghy. There needs to be provision for a tent or cuddly for environmental protection if this becomes a life raft, and to keep gear or people dry on a long dinghy trip. Granny bars for getting in/out over the bow and side will be needed. There should be somewhere to stow a drogue and its rode and a rack for oars and rods on the sides; under the gunnels would be a good idea.

These three images are a baseline. We’d love to hear your thoughts on the single vs twin outboard question. And, what, if any features you think should be incorporated in the dink design.

This entry was posted on Sunday, April 21st, 2013 at 8:54 pm and is filed under Dashew Logs, three. Both comments and pings are currently closed.


33 Responses to “The Dinghy Conundrum – What Is The Correct Mix Of Factors?”