Dave Snow, a Puget Sound sailor sent some excellent questions about our recent blog about crossing the English Channel. We’ll try and answer them here. 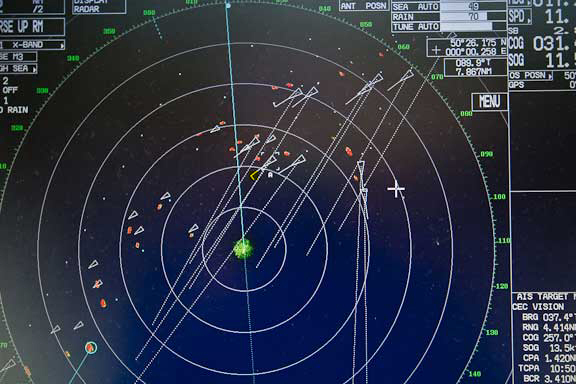 To begin with, the radar is in one of its stabilized modes. In this particular case, the radar picture remains oriented in the direction of the latest update we have applied. If our heading remains the same, the course line stays pointed up. If our course changes from the last heading update, the course line projecting from the bow reflects this, and here we are headed a few degree to port from the last update. It is an excellent quality control for the pilot. You are probably used to seeing the radar bearing ring numbers start at zero at the top but in this stabilized mode those numbers show the heading at the update point, and the true heading of any target relative to us. Stabilized headings typically show more accurate intercepts from AIS and ARPA, hence the use here.

AIS target “A” with the yellow highlight, has a hook on the end of its pointer at right angles to port. This hook (there is another a couple of ships back pointing to starboard) indicates the target is turning in that direction.

Some of the targets are not marked by ARPA. When we are in crowded waters we typically use just AIS, which is supposed to be more accurate and faster at updating. The radar will turn a target automatically into an ARPA symbol, but we leave this off unless we are well offshore.

The trail of dots behind the targets are a function we can turn on or off. The intervals are also controllable (i.e. 30 seconds or five minutes, etc.). They are helpful in figuring out what the target has been doing and maybe what it is going to next. You can do the same thing with trails, but this would be much too cluttered with all of these targets.

Now Dave’s tough question. With four vessels closely spaced what is our tactic for crossing, and how close is reasonable under these conditions? First, our preference is always to take the stern of targets. This eliminates problems from miscalculations or is there is a mechanical breakdown which might leave us in the path of one of the ships. If we are in open waters, we want to see a crossing vector of no less than two nautical miles if we are taking someone’s bow. But we are a twin engine power boat able to adjust speed up or down with ease. Under sail we’d want three or even four miles. Otherwise, we slow down and/or adjust course to take the ships stern.

But this situation is more complex. If we slow down and let this gaggle of ships through, we have a second pulse coming through right behind. Here we are trying to maintain a one mile separation of our vectors, but in reality this was down to a half a mile in several cases.

AIS is a great tool for dodging ships. But we still take visual bearings on the ships to make sure that the AIS (or ARPA) hasn’t developed a bug.

OK, back to the radar photo. We took the sterns of the first group of ships, then sped up to pass ahead of the third group to starboard just outside the fourth (eight mile) ring.

This entry was posted on Monday, April 20th, 2009 at 9:31 pm and is filed under Cruiser's Tech Talk, Dashew Logs. Both comments and pings are currently closed.


3 Responses to “Using Radar in Traffic”