The FPB 97 has a wicked amount of fuel and water capacity, so much so that only in special circumstances would the full amounts of either ever be carried. The weight and position of these liquids obviously have a substantial impact on fore and aft trim and stability. We are dealing with close to 37,000 liters/9,800US gallons of capacity (after deducting for structure, separating coffer dams, and stabilizer coffers).

The drawing above shows the tanks at half height. There are many ways to calculate volume, and we normally employ two methods as added insurance, it being easy to get these figures wrong. The data above is from our 3D modeling software. It tells us the volume and center of each tank section. We double check this using sectional area at each station, as indicated in our hydrostatic analysis. A deduction is then made for the structure. Being a metal boat, this is usually in the range of three percent (fiberglass tanks can cost as much as 10% of the volume for structure). 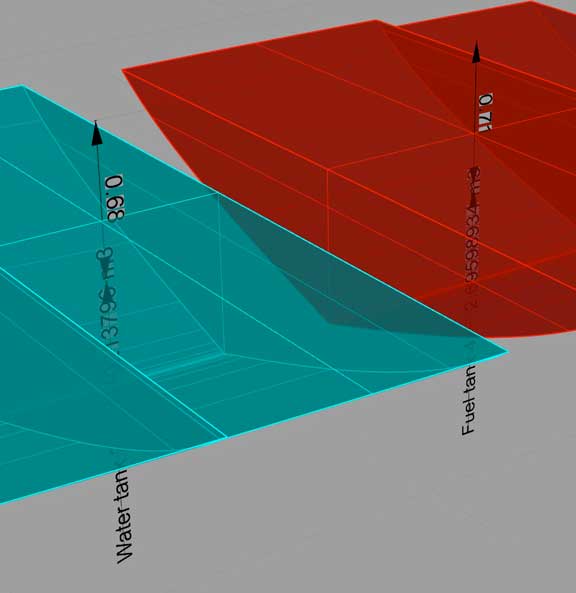 Between diesel and fresh water tanks there is an open area, called a coffer dam. This separation exists to isolate the tanks in case a leak develops.

Deciding how to divide the total volume is relatively simple, at least in theory. There needs to be enough fresh water capacity so its weight can replace diesel burned on a long passage if there are risks of severe weather. Unless the FPB 97 were caught by a vicious storm and very light on diesel, you would not use more than half the fresh water capacity. But in rare situations it might all be warranted.

That leaves the diesel, and how much fuel do you really need or want to carry? While there are some absolute stability issues involved with the fresh water, beyond a certain level extra fuel is not usually going to be warranted.

How does one decide the correct ratios? This is where we encounter the baseline issue: how is the boat going to be used? For everyday, local cruising, where fuel supply disruption or availability is not a concern, a thousand gallons/4000 liters, is going to last a long time. Let’s say you are spending the summer on the East Coast of the US. Lets assume 800 US gallons/3000 liters is aboard. That is enough to take you something like 1100+ NM at 11 knots. With the solar array supplying at-anchor power, daily generator consumption will be minimal.

On the other hand, if you think prices are going up, or you have found a deal, it might pay to load up. We’d probably be content with 4000 US gallons/15,000 liters. This stretches the range to well past trans-Atlantic. Concerned about the geopolitical risks? Then fill her up. We’re now talking 6800 US gallons/25,700 liters. If you want to really stretch the range, change one of the two props to a folding wheel, reduce pitch on the fixed prop a touch, and back off to 200 NM per day. Watch your weather carefully, and minimize the air conditioning loads, and you just might do a circumnavigation without refueling.

The last part of this decision-making process is where the fuel and water is placed in the hull, and how the tanks are segmented. Here the issue is minimizing trim impact as fuel is consumed, and maximizing the leverage of the fresh water to change the trim, should it be desired.

The centralized fuel tanks have little impact on longitudinal trim as fuel load is changed. As the fuel load lightens, there will be a tendency to trim by the stern, generally a good thing for the performance and control. But if you prefer even trim, this can be easily compensated by adding a little water forward. Three water and four fuel tanks allow a high degree of flexibility,

This entry was posted on Sunday, April 22nd, 2012 at 6:18 pm and is filed under Dashew Logs, Wicked FPB 97. Both comments and pings are currently closed.