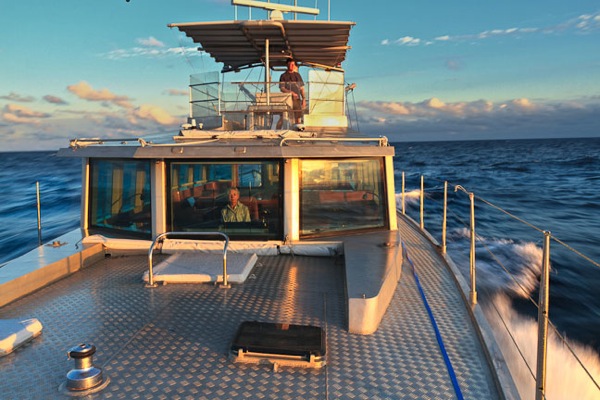 With Wind Horse at rest we have been able to get an accurate measure of the fuel left aboard. To do this we have moved all remaining fuel to the forward central tank, and then measured its height with our calibrated Tank Tender. The fuel data for the passage from Las Palmas in the Canary Islands to Fort Lauderdale looks like this:

The fuel burn rate is a bit higher than our experience in the past. This is due to several factors. First, we were running a quarter of a knot faster than our sweet spot, costly in terms of efficiency. Weather, a daylight finish requirement for ARC photographers on the first leg, and a narrow comfort window weather wise on the second leg made this worthwhile.

Next, air conditioning was run for much of the trip. An educated guess on the fuel burn this required is around a quarter of a gallon/one liter per hour.

The bigger issue is something we overlooked when going through the logic on our new props. They do allow us to reach cruise speed at a lower RPM, and we are quieter as a result. But we are now running out  of the sweet spot for our engines in terms of power draw and RPM. This means we burn more fuel for a given horsepower load than if the engines were turning a few more revs.  We can address this by derating the engines from M4 to M3 which takes the fuel curve sweet spot to a lower range of RPMs (accomplished with a change in the injection pump rack settings).

That should get us back to where we should be on fuel consumption, a touch under seven gallons/26.5 liters  per hour at 11 knots.

This entry was posted on Wednesday, December 15th, 2010 at 1:03 am and is filed under FPB Series Notes. Both comments and pings are currently closed.