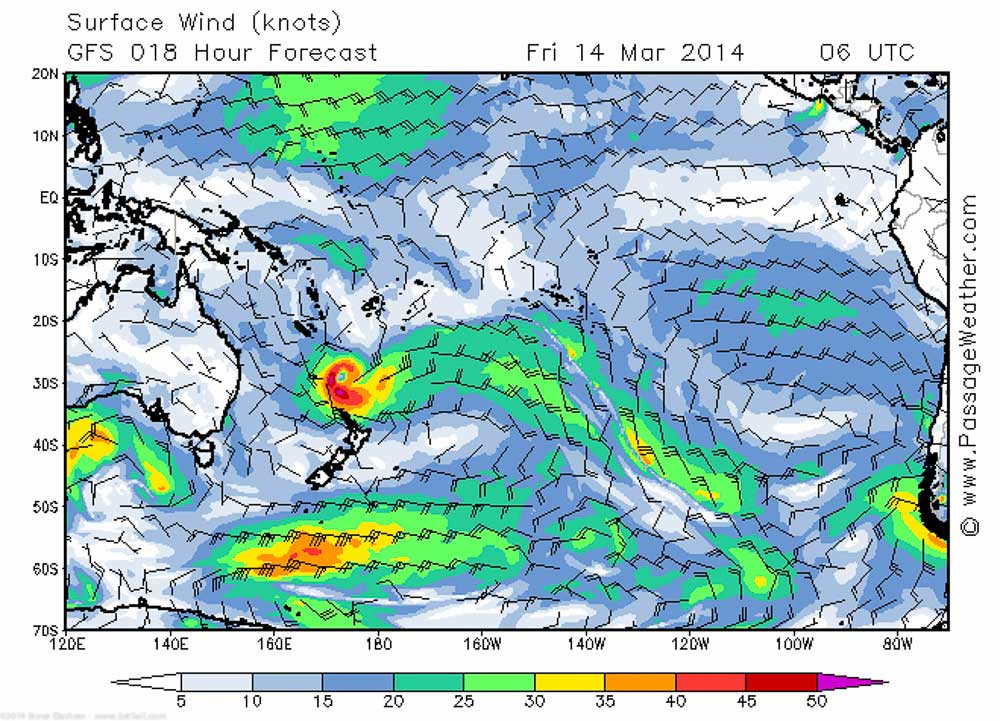 The passage between New Zealand and French Polynesia is one of the more difficult ocean crossing endeavors. At 2200 miles along the great circle route, it can often be as long as 2600 or more nautical miles depending on weather routing. John and Amanda Neal bill this as a heavy weather passage in their sail training business, and for good reason. FPB 64-6 Grey Wolf is on standby, waiting for a weather scenario that offers decent odds. The chart above is for Friday, March 14th, and is not what you’d call auspicious. This is the first leg in her voyage back to the old world and her new home in UK’s Channel Islands via Panama. 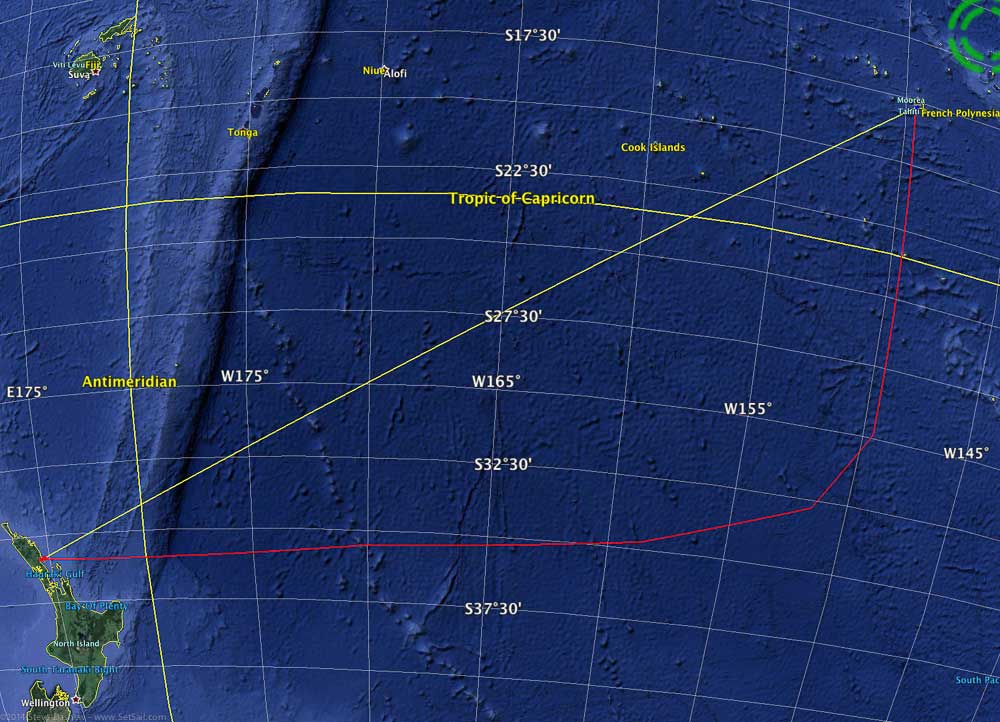 Here is a look at two of the course options. The red line represents trying to minimize headwinds, and then when Tahiti is a fetch, angle wise, making a left.

This is late summer in the Southern Hemisphere, which means several things. One is that the South Pacific high pressure system is in its position furthest away from the equator, which brings the easterly trade wind belt south and directly in Grey Wolf’s path.

To make things more difficult, the cyclone season is just ramping up. The official forecast for El Niño, which gives a higher cyclone probability to French Polynesia, is neutral. But the current activity (see below) suggests something is afoot. 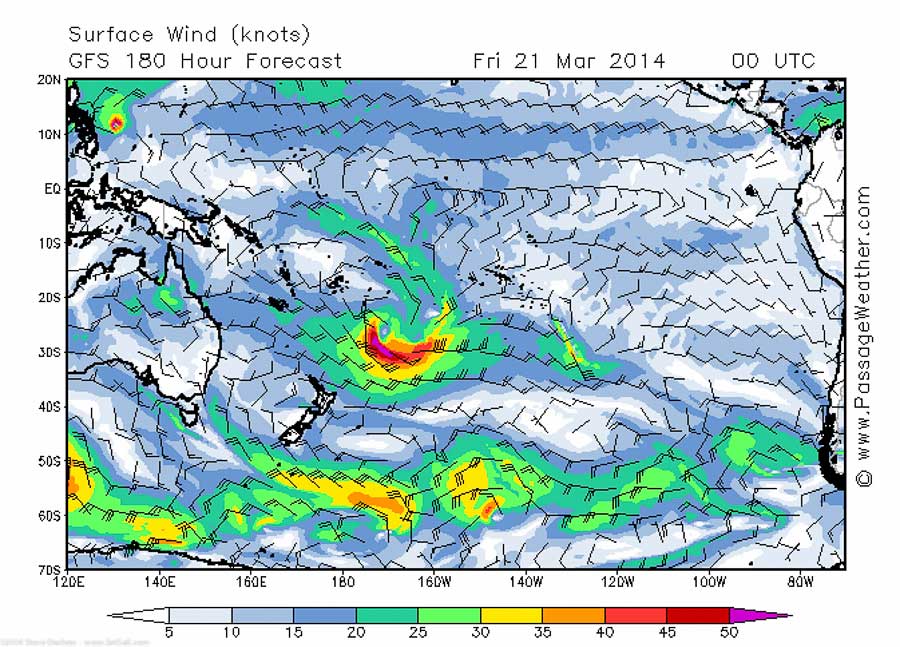 Here is the GFS forecast for next Friday. That’s another tropical event transitioning to extra-tropical, shown halfway along the path to Tahiti.

There are a few things to take into account with all of this.

We have made a number of passages crossing hurricane belts in season where we had the speed to make use of their benefits. Nuka Hiva in the Marquesas to San Diego, 2700 miles normally uphill, comes to mind. Here hurricanes were beneficial (to see a video on this passage click here), helping us cover the 2700 NM in just 12 days.

We have done the New Zealand-Tahiti run twice. The first time was under sail with the 68-foot Sundeer, leaving ahead of cyclone Bola in summer of 1988 – which hammered New Zealand, arriving in Tahiti a day after a small tropical disturbance created local havoc. The second time was with the 78-foot ketch Beowulf, via the Austral Islands. That was in 1997 and the weather patterns forced us to sit in New Zealand for a month waiting for decent conditions to depart. A video of this passage is here..

FPB 64-3 Iron Lady made the Tahiti passage last year. But she left later in the season (you can see her posts here).

All of which is to say this can be done, but it won’t be easy. 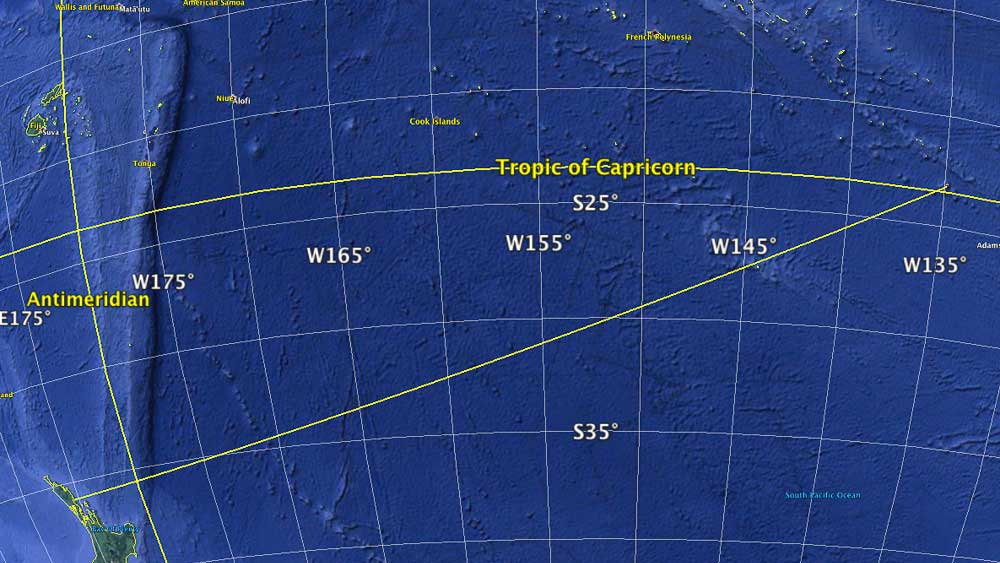 There is another route to be considered. Although the crew would like to experience the attractions of the Society and Marquesas Islands, if they are forced to take the sailing route, they can also look at heading to the Gambier islands at the bottom of the Tuamotus. This keeps them further south, is the same distance as Tahiti via the dog leg course, and has the potential of less exposure to tropical weather issues with reduced headwinds along the way.

When Grey Wolf departs they will be pressing the boat hard to keep speed up. The crew will definitely earn their sea-going stripes. They will want to have a polished hull and prop, and keep the boat light for speed rather than comfort. And they will be getting outside weather routing help. With all of this they are also going to need some luck.

Our books Surviving the Storm and Mariner’s Weather Handbook cover these situations and much more.

Peter Watson and crew will be reporting on their trip on the Berthon website here.

This entry was posted on Friday, March 14th, 2014 at 5:19 am and is filed under Dashew Logs, FPB 64 Passages, three. Both comments and pings are currently closed.