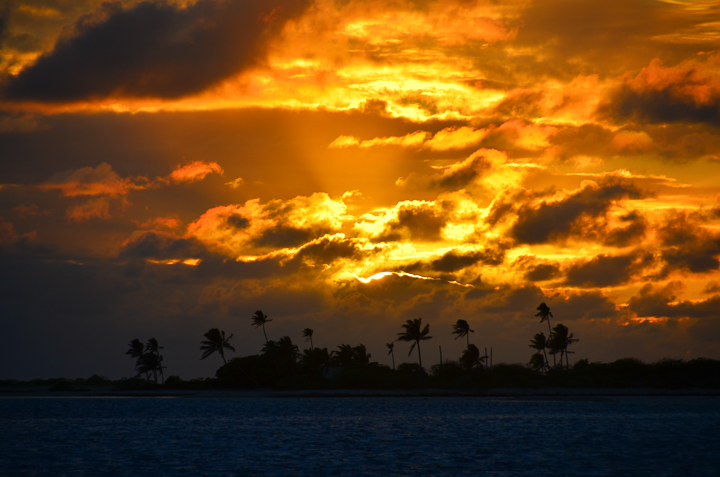 The following report was sent in by Mark Fritzer of the FPB team, who is crewing aboard FPB 64-3 Iron Lady. They have just departed from Nuka Hiva in the Marquesas Islands, bound for Hawaii via the Line Islands.Iron Lady is being routed by Rick Shema at TheWeaherGuy.com. The initial part of his forecast follows. We’ll send more detailed reports as things become interesting – right now they expect to have southeast trades for the the next week, a broad reach in sailing terms.

Tropical Cyclones (TC): Not a factor along the route. There is one TC in northern hemi. Tropical Storm Pewa located about 1420 nm SW of Kauai moving NW.

Having been involved with the FPB program for just over two years now and not yet having had the chance to experience one at sea, you can imagine my excitement at being invited by the owner of FPB64-3, Pete Rossin, to assist him in bringing his boat North to Hawaii from French Polynesia. Armed with our new FLIR i7 camera and having drunk deeply from the Dashew School of design, I am well prepared to finally experience this little thing called FPB.

My adventure began when I loaded up my gear and some spare parts and flew to Los Angeles. Once there, I spent 5 hours trying to explain to two ticketing agents and a supervisor that I wasn’t trying to permanently enter French Polynesia on a one-way ticket as I was leaving the country by vessel. For some reason, the letter of guarantee I had was not acceptable to them (because of immigration they said) and I was finally forced to purchase a return fare or be sent home. With return fare in hand, I was allowed to board the plane and left Los Angeles around 23:45. Wouldn’t you know, when I arrived in Polynesia immigration was very accommodating and couldn’t understand why I had such a problem with the airline.

By the way, if you happen to be boarding a plane bound for the far reaches of the world while carrying a high output alternator, find another description for it (maybe rotating dynamo?). Regardless of which ticketing agent I dealt with in either country, an alternator is a car part and therefore a greasy, dirty piece of equipment that shouldn’t be allowed on a plane. The one thing I thought for sure would be a problem was the FLIR thermal camera, but nobody cared about it, only my shiny, new alternator.

After spending the night in Papeete due to missing my connecting flight to Nuka Hiva, I boarded a small duo prop plane bound for Hiva Ora and Nuka Hiva. After arriving in Nuka Hiva and gesticulating like a wild turkey since my French is embarrassingly bad, I was able to find a cab ride into Taiohae. Mr. Rossin advised me to have my camera at the ready for the ride up and over the island, as the views are quite spectacular. Unfortunately, most of the upper part of the island was shrouded in fog when we came over the peak, but I could hear the ocean far below as we raced around hairpin turns headed down into town. After arriving and looking back up the goat trail that serves as a road, I think I’m glad I wasn’t able to see what lay a few feet out my window.

Meeting with the owner of FPB64-3 Pete Rossin, and his very capable captain and five star chef Steve, I was given the classic experience questionnaire and safety briefing. It is quite obvious to me that these two have done this a few times.

Within minutes of my arrival, I was treated to an acrobatic display of baitfish running for their lives in, out and across the top of the water. Soon after, manta rays appeared on the surface, their large mouths yawning and scooping nutrients followed by numerous other specie of fish. I could already tell – this is gonna be good!

After bunkering and a quick hull cleaning to satisfy the requirements for entry into Palmyra, we cleared customs and left the Marquesas at 1300 hours bound for Christmas Island. Our position was 8° 46.9? S by 140° 33? W with air temp of 86°F, sea temp of 84.3°F, clear skies and wind out of the NE at 13-15 knots.  At long last I get to experience the legendary sea kindliness of the FPB64.