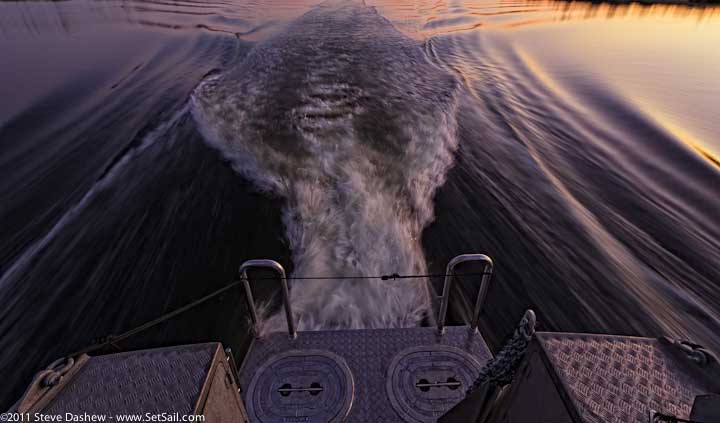 We are through with phase one of our work list on Wind Horse, and have been out testing the changes. The photo above was taken at dusk today, coming back down the Intra Coastal Waterway to the Jarrette Bay facility where Cory McMahan has his Triton Marine operation. Wind Horse is within two tons of full load, the water depth is 13 feet (four meters) and we are running at 1400 RPM, roughly nine knots.

Considering the slow speed (for us), and the water depth, this is an exceptionally clean wake release off tne new transom extension.

The benefits of this are more than just a lovely pattern on a calm, cold, evening. Exhaust gas temperature, a good indicator of power being used and fuel burn is down eight to ten percent. The extension allows underwater exhausts which are positioned so as not to disturb water flow into the  propellers and rudders. It is much easier now to board from dock or dinghy, and the remote exhaust is both quieter and cleaner.

We originally went down this track to model these features in a real world situation, as opposed to a sterile tank test regime, for the larger FPB designs. Now that the results are in, we’re pleased to have the extension for its own sake, and are looking forward to seeing how it performs offshore. 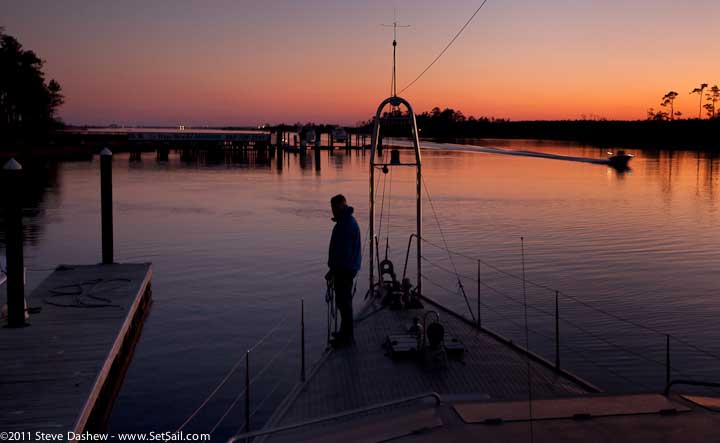 We have a long list of items to cover before we return, after which the flow of posts on SetSail.com should return to a more regular schedule.

This entry was posted on Sunday, December 18th, 2011 at 9:26 pm and is filed under Dashew Logs. Both comments and pings are currently closed.


6 Responses to “A New Look Wake For Wind Horse”