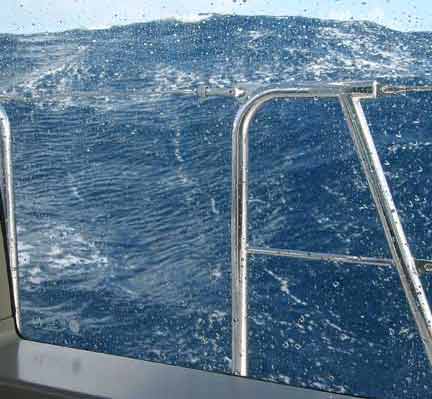 Of all the issues facing us during the design of this boat, none was more important than the approach to stabilization.

In theory, our hull shape, polar moments, and stability curve should make the job of the stabilizers much easier. But as none of the active stabilizer companies had ever supplied equipment to a vessel like this, they had no real-world data with which to work. The “engineering” in use by the industry was very simplistic, based on experience rather than first principles.

As a result, we went through an exhaustive design analysis using a variety of engineering approaches and CFD analysis to come up with a series of principles on which our choice of stabilization gear could be based.

The primary requirement was for the system to handle adverse weather where we were faced with a confused, large sea state. The worst case scenario would be after the passage of a front, where the wind shifted 90 degrees. Jogging slowly into the most dangerous breaking seas, there would be waves on the beam as well. 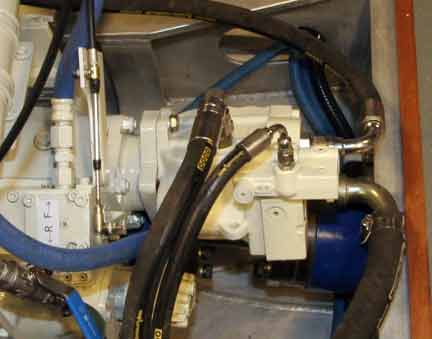 As a result, we wanted powerful hydraulic pumps, to work when we were on a single engine (if we had a failure of one of our two engines) at slow RPM. Our pumps are designed to supply full hydraulic flow at 1200 RPM on one engine.

The question of stabilizer size was next. Using normal industry criteria and our cruising speed of 11.5 knots, we could have gotten away with stabilizers as small as 4.5 square feet (0.4 square meters). However, these would only be adequate for that speed with small waves. Bigger waves, and the slower speed required in them, would leave us wanting for stabilizer capacity. 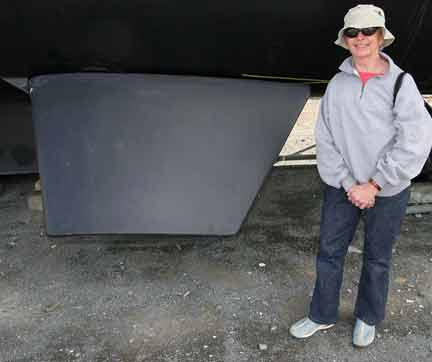 After looking at our CFD data, and allowing for some gut instinct, we went for 12-square-foot foils – almost three times the norm.

Based on our VPP analysis, backed up now with real-world data, we know that in light wave conditions we are paying about a 3 percent drag penalty for these oversized fins. But once they start to work, the drag penalty goes away – they are more efficient than the smaller fins in bigger waves.

We tested the foils in single wave systems during sea trials off New Zealand. In 6-foot (2m) waves, closely spaced, running abeam at slow speed, we never ran out of stabilization capacity.

However, it was during the first 36 hours of conditions after leaving New Zealand for Fiji that we got a real-world test. With swells from three directions and 10- to 20-foot (3 to 6m) waves just aft of the beam, running at 11.5 knots there was little motion. We were, in fact, far more comfortable than had we been aboard one of our larger sailing designs.

We tried slowing down to 7 knots, and although motion increased, we were still very comfortable. Motion was still tolerable heading into the seas at 5 knots, as well as with swells hitting us from the port beam and both stern quarters.

We went with NAIAD because we liked their shaft engineering better than the other suppliers, and our instinct was their Datum control might be the best available (although this was just a guess).
We have found that the combination of large fins, big hydraulic capacity, and the Datum controller really do work well. The Datum allows us to fine tune a series of underlying variables as well as controls in use underway. This fine tuning has taken place over the last 15,000 miles.

Because we have such large fins, and so much hydraulic power, it is easy to have too quick a motion. This creates a jerky, hard feeling to the corrective movements. By reducing the underlying factors, motion is softened. The trick is to find the combination of control tuning, boat weight, speed, and waves, which gives the most all around comfortable ride. Where we are at right now allows the boat to move around a bit so that the corrective motion is soft, but the allowed motion is not so much as to be unpleasant.
In heavy weather, with the boat slowed down, we’d probably switch to a “hotter” setting, where the stabilizers act with more authority.
From a design standpoint, one of the interesting things to find out is how the real world compares with the numeric data from which me made our decisions. We know it feels good! But what does this mean mathematically?

Towards this end we have placed six accelerometers (G-meters) around the boat. There is also a roll angle and roll rate sensor. 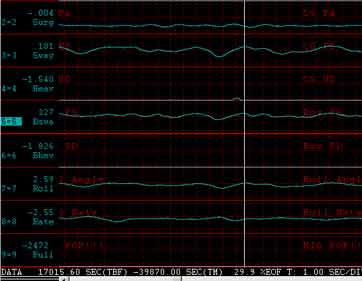 These eight devices send data 10 times per second to our PC, so that we can capture the motion data. This amounts to roughly one gigabyte of information every 24 hours. We look at this data underway while we are experimenting, and study it after each passage. We can output the data to an Excel spreadsheet for further analysis, which is very helpful in comparing real and theoretical worlds.

The bottom line is that this new boat is by far the most comfortable aboard which we have ever voyaged. In all sea states – from confused head seas to large crossing swells on the beam the motion is significantly less than anything we have experienced in the past.

This entry was posted on Thursday, October 20th, 2011 at 2:40 pm and is filed under Dashew Offshore, FPB 83. Both comments and pings are currently closed.