So how does this work in the real world? As this is being written, we are sitting in front of a very toasty Hawaii Yacht Club. The breeze is light, and there are occasional squalls. The only power available is a 30-amp 115V plug on the dock. And this is enough, barely, to run the saloon air conditioning, for which we are very thankful. The forward and aft staterooms are easily cooled by their respective units. In fact, we have to be careful not to make these too cold, as this time of year we sleep only with sheets.
The saloon is more problematic. With the huge heat load from the glass and deck hatches, the two 16,000 BTU units cope – but just barely. However, they do get the job done, and that is all we care about.

What about going to larger saloon units? We’ve got the space, so that is not a problem. However, going up in size – say to 24,000 BTU units – would mean going up in genset capacity, not being able to run on 30amp/115V AC shorepower, and not being able to use our inverters underway. So, as far as tradeoffs go, we think we’re in the right corner on this equation. Don’t care about genset size? There is still a problem. If you don’t need the air conditioning, it becomes very difficult to properly load the generator in temperate climates. And running a genset for long periods at light loads makes it very unhappy. 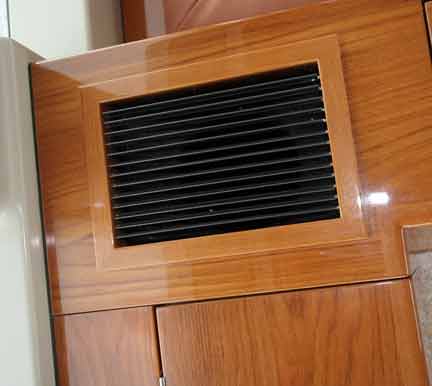 Going tight on capacity means we have to be efficient with installation, ducting runs, grills, supply and return air. Here is one of our custom return air grills. The four supply air grills in the saloon are organized to throw the air up and around, washing much of the window surface in the process. Return air for the saloon is under the seats, into the basement. In effect, the entire basement area is an air shed for the saloon. This increases capacity requirements, but insures that the basement stays dry – no mold or mildew here!

Return air for the forward cabin is much more difficult. It comes through this grill, via a baffled and lined duct. The concept is to reduce noise. It has not been as successful as we had hoped, and we need to do some thinking about how this is executed when we get home. 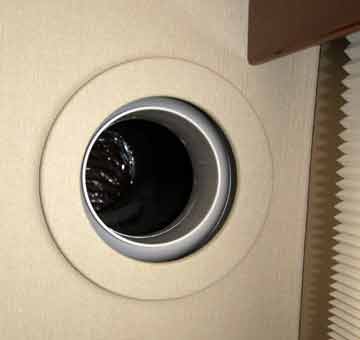 These supply vents (eyeballs) are very efficient, and throw the cool air well. There are a pair of these forward, and one in each of the aft cabins.

Finally, condensate drainage is something which we wrestled with for a long time. We ended up draining all four compressors to the engine room where it empties into a small plastic accumulator with a pump and float switch. Should this fail, condensate would overflow into the engine room bilge where it is handled with the local bilge pump.

As we have employed our usual strategy with awnings and hatches, we have rarely needed air at anchor on this boat. 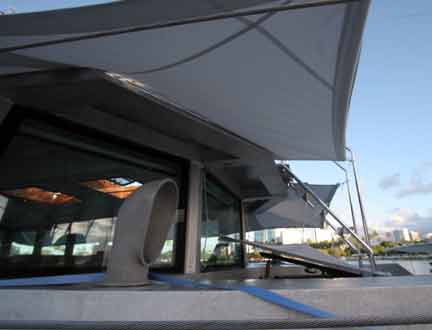 Of course there have been a couple of very still nights, where it was a bit toasty and humid. For these situations we’ve found that running the generator and air conditioning for 45 minutes to an hour before bed reduces humidity and temperature to the point where we start out sleeping under light covers. Then, usually by early morning, one of us gets up and open the hatches and let some of the night air below.

Underway as we are now, we keep the air running in the forward cabin where we are resting. The temperature is set at 77F / 25C, which is lovely for sleeping. The saloon is left at ambient, as long as we can have the overhead hatches open – or we are sitting on the flying bridge where it is usually cool with a nice breeze. When it is wet on deck – as it was a while ago with rain squalls – we run the saloon air conditioning.

One of the keys to our approach to air on this boat is the eyebrow awning around the perimeter of the house, as you can see outside of the windows in the photos above and below. These shade the windows for all but the first and last hour of the day. 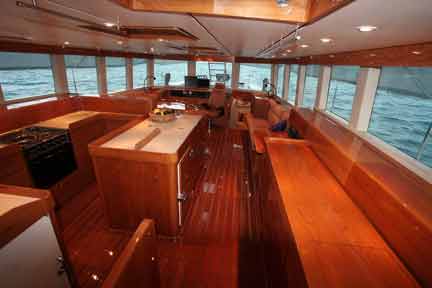 This entry was posted on Thursday, October 20th, 2011 at 2:46 pm and is filed under Dashew Offshore, FPB 83. Both comments and pings are currently closed.