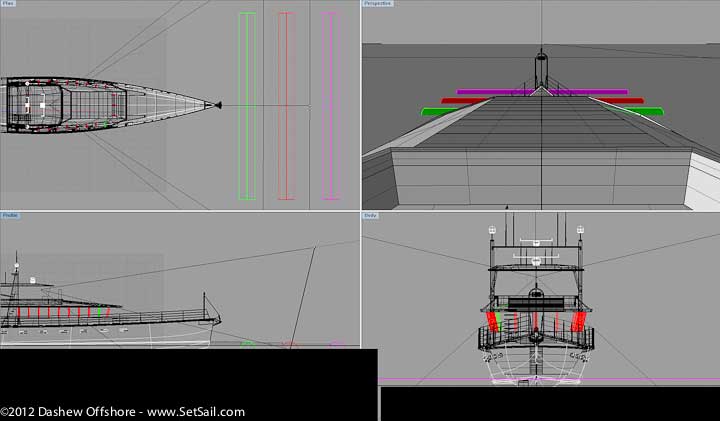 A primary design consideration is always what you can see from various places on board. As yachts get larger the sight lines diminish, and you begin to rely on secondary input: usually crew members wearing headsets, calling distance off the dock or to another vessel, to the con. We’d rather see and judge for ourselves. Hence a rigorous study early, the results of which guide the ensuing design.

There are several different criteria we are looking to fulfill:

The intro drawing and those that follow were created using Rhino 3D, with an early but representative version of the Wicked FPB. We have a “camera” to check sight lines, that can be adjusted in terms of lens length (zoom) and direction of view. By varying the apex of the view pyramid, and moving the lens as you would your head, we can look at various options. Each image is a montage of four views: upper left is looking down (plan); bottom left, side (profile), bottom right, body plan (bow); and upper right is a perspective view.

The lead image shows field of view from the as yet unnamed-deck helm position. Height of eye is 1.5m, or five feet. Note that you can see logs quite close if they are slightly off center. 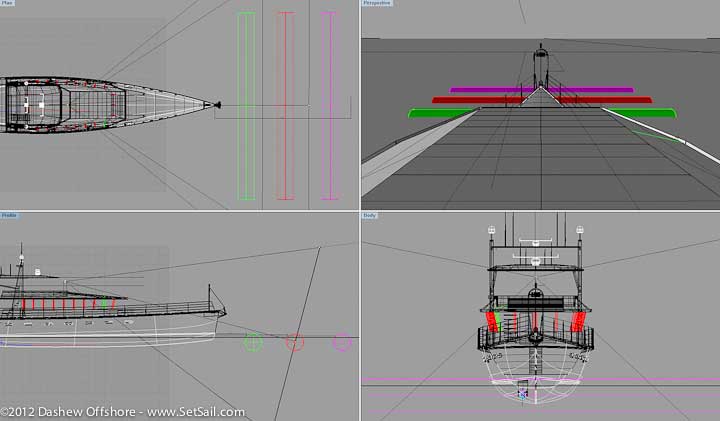 The view close to the bow is even better if you walk to the forward section of the upper deck, as in the drawing above. 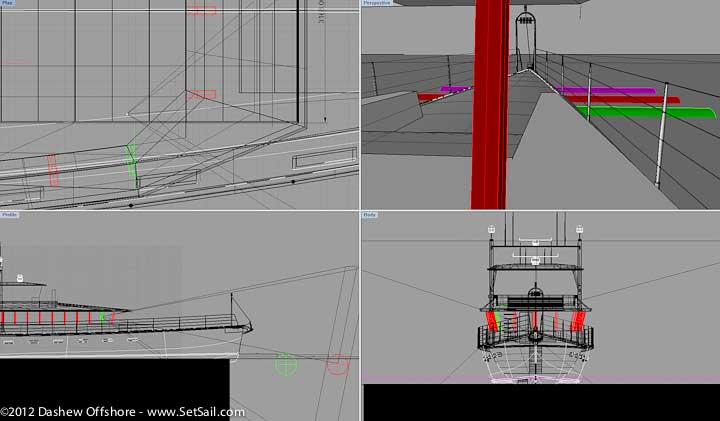 The same logs, now looking from the forward end of the great room. 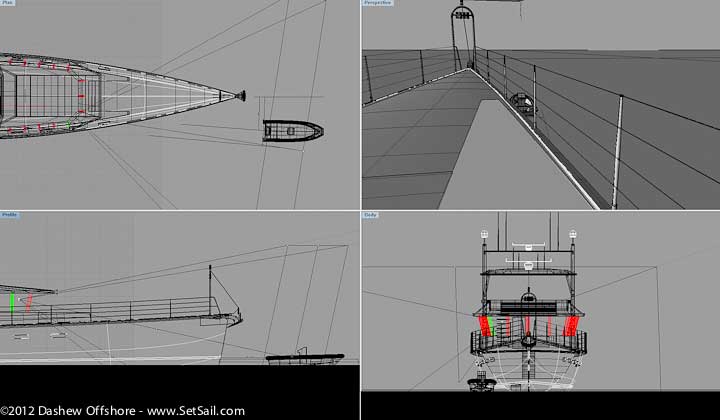 Same position onboard, but here checking a dinghy visibility. 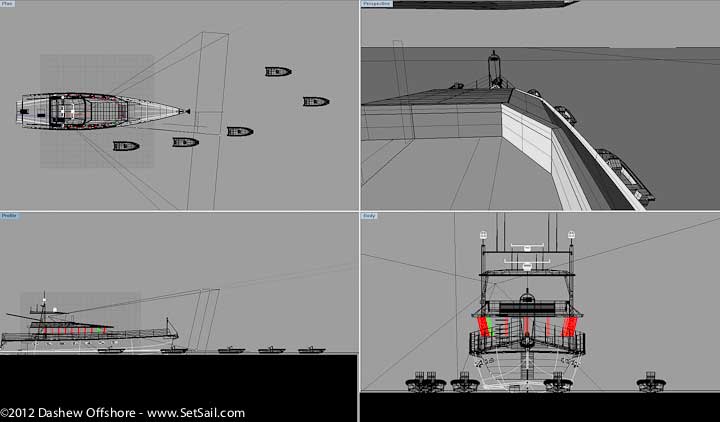 Back on top, checking a fleet of small boats. 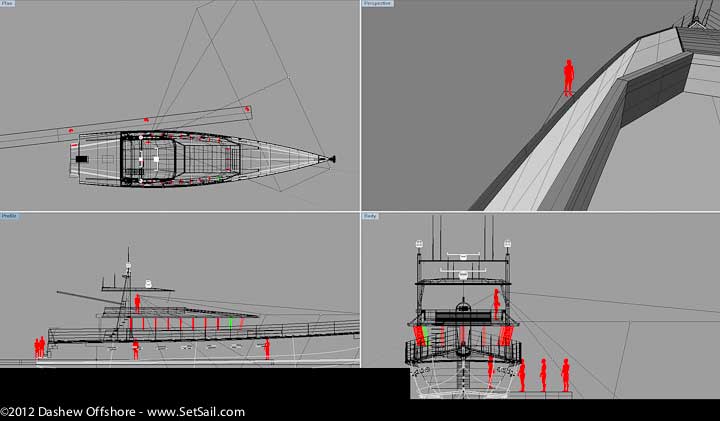 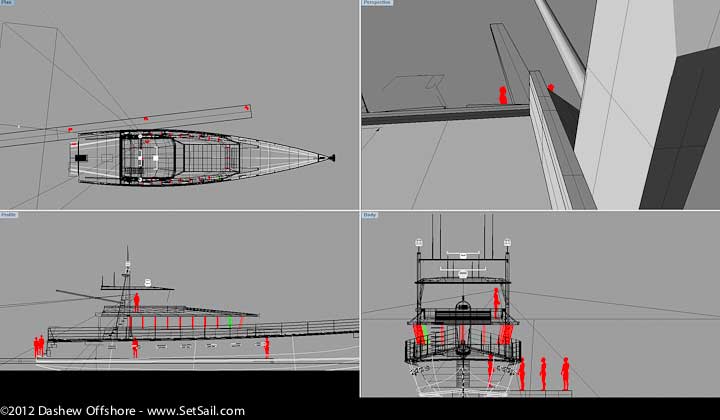 And now looking aft. In both cases the watcher is standing to the side of the upper deck.

By normal standards this is excellent visibility for docking. Moving around a bit you can see folks standing on the dock and/or the pilings. But this is far from perfect, which is where the observation platforms come into play.

Let’s set the scene for what would be a normal unassisted (nobody to take a line) docking scenario. 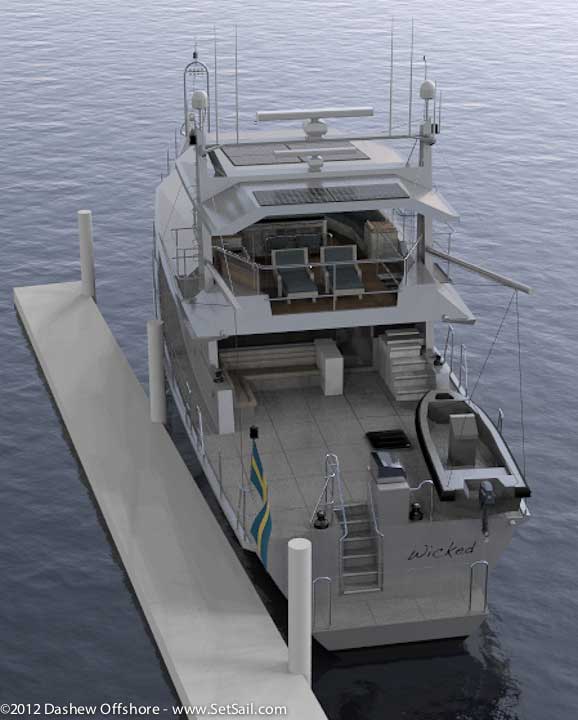 Assuming a floating – and therefore low – dock, the stern is rotated in to allow the crew with a breast line to step ashore. The con must be able to see the dock/swim step intersection, or at least the hand of the person on the swim platform. 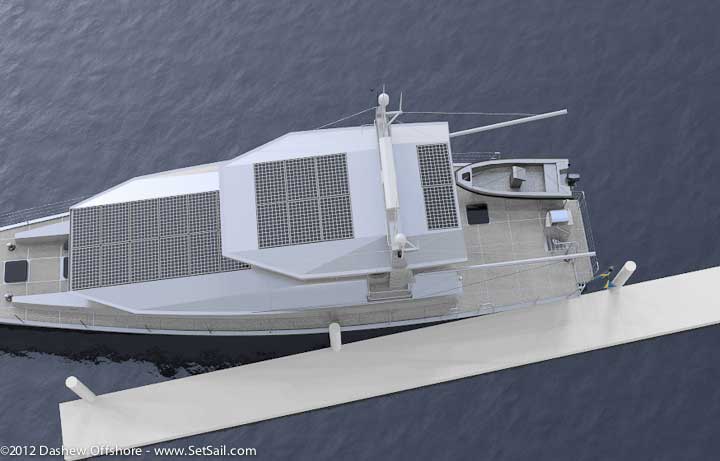 We’ve previously shown you this view from the helm position under the roof. Now let’s have a look from the docking wing. 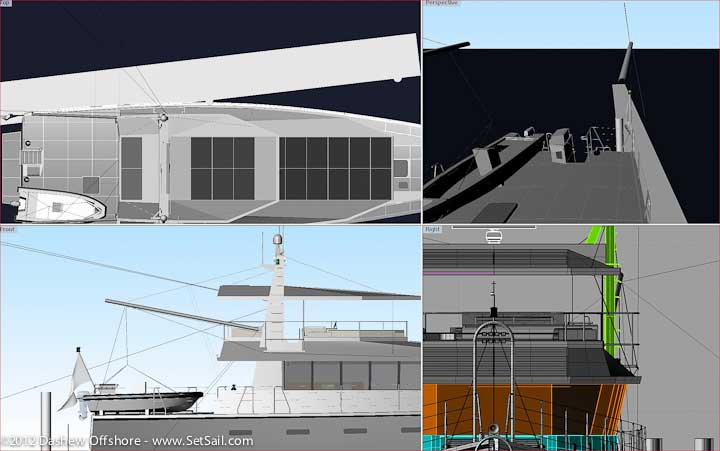 You can see the camera has been set to look from just off the mast to the top of the pilot by the stern. You can see the dock running under the deck flare, which makes it easy to get the swim step near the dock. 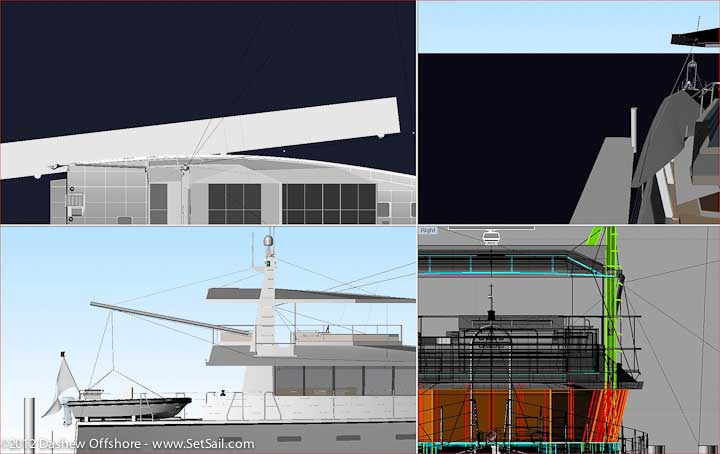 Finally, looking forward from the same docking wing, this time with the camera aimed at the forward piling. 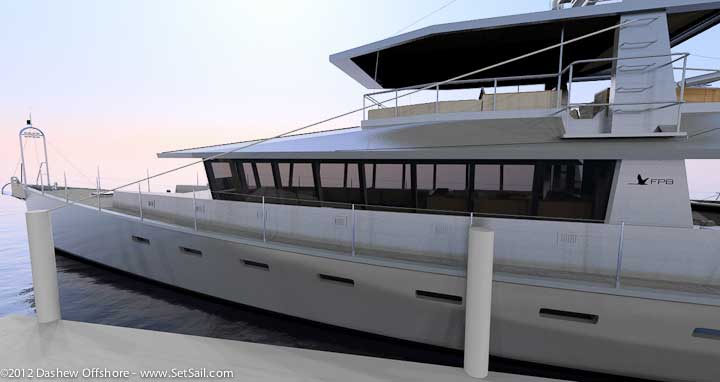 To make what you see a little more clear, there is a line drawn from a mast ladder rung to the top of the piling forward. Notice that this line does not cut through any structure. Neither will your eye. 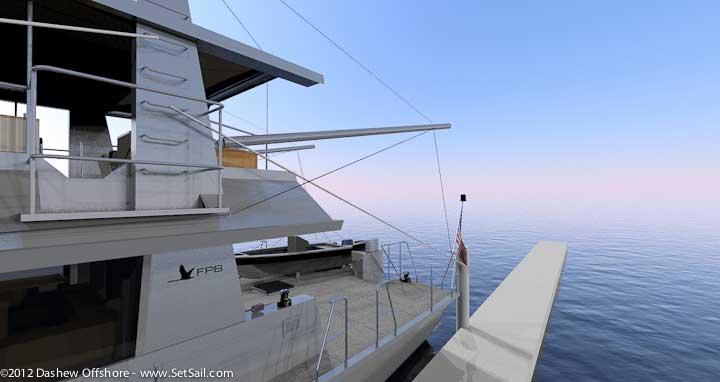 Same logic, except this time the line runs aft from the mast rung.

This entry was posted on Thursday, February 9th, 2012 at 3:56 pm and is filed under FPB Series Notes, Wicked FPB 97. Both comments and pings are currently closed.


9 Responses to “Analyzing Lines of Sight”