Can A Non-Planing Hull Like the FPB Operate Efficiently at Post-Planing Speeds? 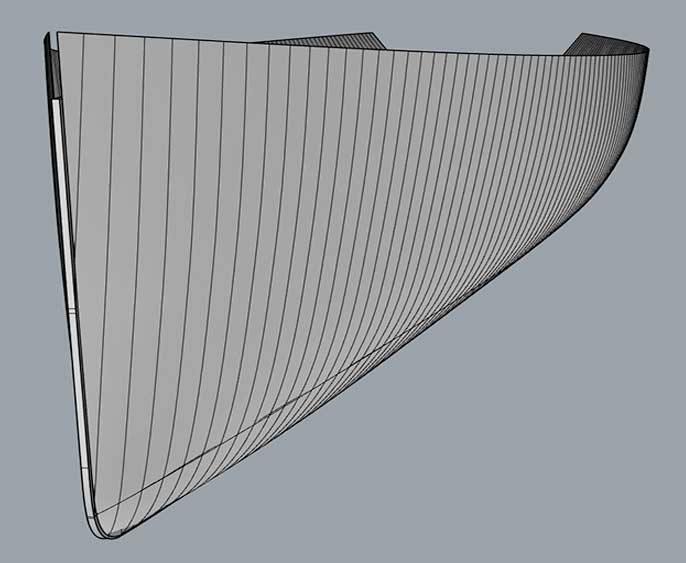 Over the years we have had many tools with which to predict performance, some more accurate than others. With time, and real world experience, it has been possible to some degree to fine tune the computer output to match experience.

When applied to the FPBs, results have been satisfactory: witness the performance claims of both speed and fuel burn compared to sea trial and real world experience. We have recently been working on an FPB riff where speed is a more valued ingredient than harmony and economy. Of necessity this requires higher speed to length ratios than is the norm with even the FPBs – we are talking post-planing speeds here.

Yet our round bilge, smooth riding canoe body hull shapes are demonstrably not planing hulls. Most of the yachting world will tell you it is not possible to drive one of our hulls above a speed length ratio of 1.34. A few enlightened souls might cotton to 1.4. For a vessel like the FPB 83, Wind Horse, we are talking a theoretical maximum of between 12 and 12.5 knots. Yet at full load she would do 13-plus from a  pair of 150 HP diesels.

No normal suite of powerboat drag prediction software would give you this result.

The drag and powering software suites all depend on various model series tests for their results. The software, or the person running the software, selects a model or model series which best matches the hydrostatic parameters of the hull being investigated. Turn the computer crank (OK, move the mouse) start the process, and await the resulting forecast. The more sophisticated will run a variety of models, and compare the results, much the same way a weather forecaster will look at different models, decide which is performing best, and then issue the prognosis.

But when you get to our type of hull shape, it turns out none of the usual models are that accurate if you are pushing into the higher speed length ratios.

Now it gets interesting. In the olden days, when computers were the size of small warehouses and programmed with punch cards, a good friend and often sailing accomplice of ours, Norm Riise, was the designer of choice for hypersonic wind tunnels and solar simulators. Norm also had access to the Jet Propulsion Laboratories main frame for personal projects if it was not being used for other accounts. We were playing with catamaran design in those days, and Norm reckoned he could develop a velocity prediction program that would take a hull of various parameters, add dagger boards and rudders, a rig, fly a hull, adjust the sail performance polar, and give us boat speed and VMG up and downwind in a variety of situations. We used this to design Beowulf Vl, and later the hulls for the Hobie 18, playing a myriad of what-if games with hull shape, board size, and rig parameters. What made all this possible was Norm’s discovery of an obscure series of towing tank tests that ran long, light, round bilge canoe bodies at speed length ratios of (from fading memory) five to six. Although we had no accurate means of measuring boat speed in those days, the results were highly favorable from a competition standpoint.

Almost half a century later we were discussing the validity of some of the data we have been seeing from Don McPherson’s NavCad program, how much confidence we could have in the models selected, and their numbers (we had four models agreeing on their values with one outlier). Don then decided to update some of his code to work better with slender round bilge canoe bodies at high speed length ratios. He is doing this based on the same models that Norm Riise used all those years ago. It turns out that almost all the test series of any value were done by either the US or German governments, through the 1950s and early 1960s. Since then budgets have not been as available.

For our part, while we await a release of Don’s new code, we know that if a sailing yacht like Beowulf Vl can cruise at a speed length ratio of 2.0/2.5 in a fresh breeze, a long, lean FPB will do so as well under power.

This entry was posted on Wednesday, January 9th, 2013 at 7:15 pm and is filed under Dashew Logs, three. Both comments and pings are currently closed.


3 Responses to “Can A Non-Planing Hull Like the FPB Operate Efficiently at Post-Planing Speeds?”