Chasing A Stabilizer Problem Far From Home – A Primer On Teamwork 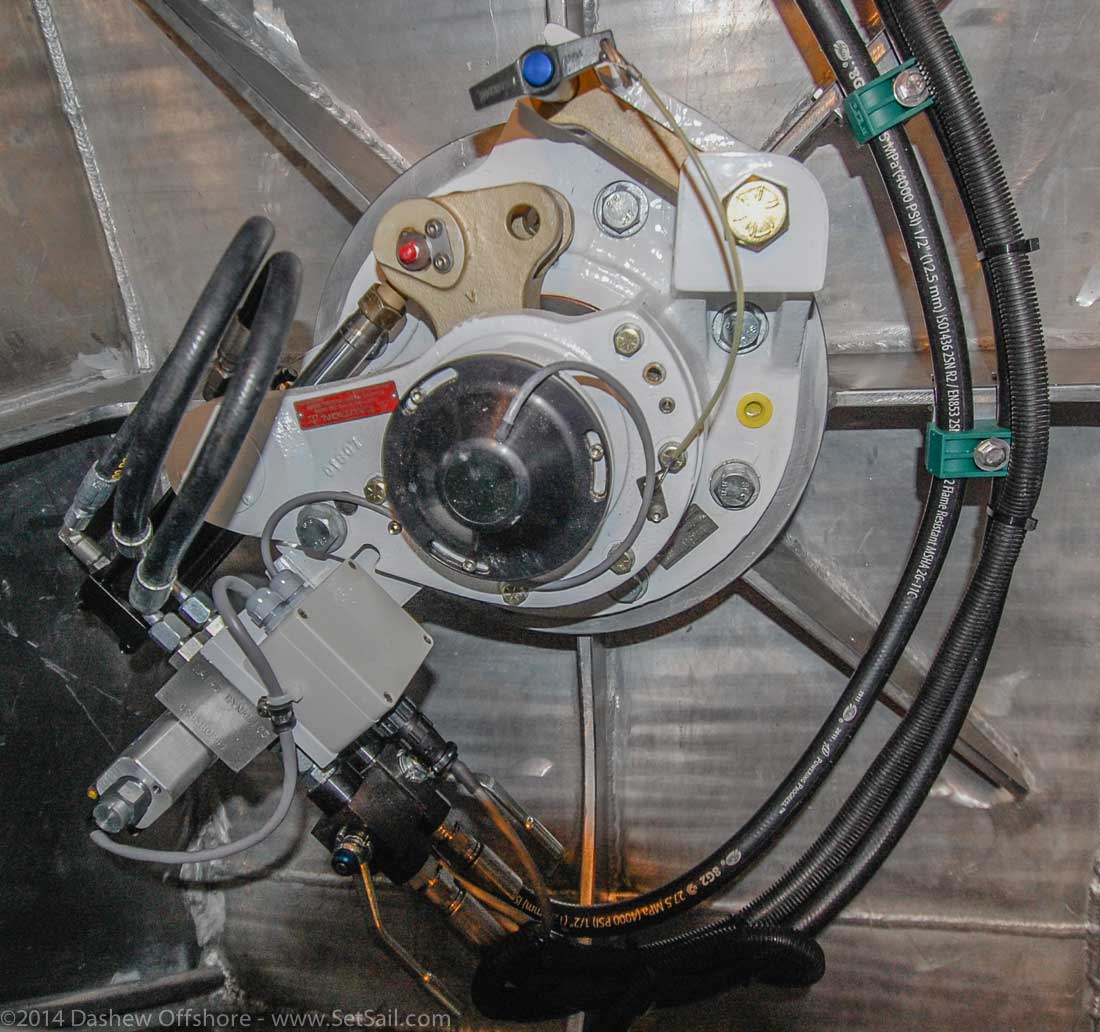 Last week we worked with Peter Watson aboard the FPB 64 Grey Wolf to resolve a stabilizer system issue. We thought the communications regarding this might be of interest since these things do occasionally occur – typically somewhere far from home base.

Steve Dashew to Peter:
What is the problem? Might be able to help

Hi Don,
Any suggestions? Best to communicate direct with the boat. They are near Tahiti and this is an FPB 64.
Thanks, Steve

That’s a new one. Have forwarded to Don Redding for advice.
Have you tried cycling the power?

Have now had an Iridium call from Grey Wolf. Starboard fin has a “tracking error” and appears to be not working.
They acknowledge the error, it goes away, and returns. At the time this occurred it was quite rough and they were getting slammed on the starboard side.
They also had a “can bus” error but this has cleared.
They do not have the commissioning codes if this is required. Owner and some of crew are technically savvy and should be able to deal with most issues.
Note that the address for the boat is Sailmail and will not accept attachments.

Falmouth Coast Guard,
Just to inform you that we are safely anchored in Tahiti and effecting repair.
Many thanks for your assistance.
Peter Watson
Skipper

Call Don Redding to discuss- if he is out, he will call you back. Leave Iridium phone number.
Try INHIBITING the tracking error warning – one more key stroke. System should function if this is just momentary loss of data.
Do you know if the fin was really not moving? Usually the error message means loss of track info – even if temporary – but fin continues to operate.
Cycle power by turning off breaker.
Determine if truly not moving.
Is there second control at fly bridge?
Could be position sensor, but usually skips over worn spot with a bang.

Have them inhibit the tracking alarm instead of acknowledging it.
Kind Regards,
Vic Kuzmovich
Naiad Dynamics

Message from Don Redding to NAIAD team and Circa Tech:

I have been on the phone with Peter on board the boat. The fin is hard-over CCW (cylinder fully retracted) and unresponsive. The feedback shaft coupling seems secure. My suspicion is that the starboard servo valve has failed. There is 24vdc present to power the valve amplifier, but the current loop sensor in the valve measures open circuit. That should cause a hard-over command.

I have asked Peter to measure the healthy port servo resistance the same way to confirm that he is looking at the right connections in the right way. If he sees 200 ohms on the port valve, then I believe it is safe to assume that the starboard valve requires replacement.

I’m waiting to hear back from him now.
Don

My suspicion about the valve was premature. He was able to measure the port valve current loop sensor as 200 ohms. When he measured starboard again, it also measured 200 ohms. The valve appears to be healthy.
Don

Thanks for all your help. Do you have any update on any more diagnostics that we should run?

Were you able to manipulate the fin back to the center position and secure it with the pin? If so, I would like to check the resistance reading between positions 1 and 3, and 1 and 2 in the actuator junction box. Make these measurements with the connecting cable to the controller removed. These pairs should read approximately 5K and 2.5K ohms respectively when the fin is centered. This will check for possible slippage of the shaft connecting the potentiometer and the fin shaft.

Also, check the security of each of the connections inside the junction box (tug each wire gently).

Also, look into the plug end of the cable you removed from the junction box. Each socket inside the connector should be just below the face of the connector — all at the same height within the connector.

It’s 9am here, and I’m available for at least the next four hours.

Peter back to Don:

Crew asleep at present so will check in about an hour. One thing for you is we did manage to center the fin and bolt. The control panel is now reporting that it’s centered so don’t think there is anything wrong with the shaft potentiometer.

Refreshed overnight: Values still to come but we were thinking of changing at the datum control module the port and starboard control plugs around to see if the fault moves, can you see any problem with this?

What you propose would be a valuable test to perform. I had thought of this earlier but rejected it as too complex and risky. There is an outside chance that you may disable the one fin that is presently operational. The upside is that it would allow us to conclusively point the finger at either the starboard electronic valve or the controller starboard channel
The nine plug sockets and mating plugs on the control module are all intentionally different to prevent accidental transpositions. This “idiot-proof” design makes swapping cables cumbersome if you actually need to do it.
In order to make this swap, you would have to completely remove the eight wires from both plugs P-2 and P-9 and reassemble them. Each wire has a small socket crimped onto the end. The sockets lock into the connector shell via a small releasable tab. The operation can be accomplished with needle nose pliers and a small flat blade screwdriver. Take a closer look and we can discuss this option further.
Do you have the wiring diagrams on board?
I concur with your conclusion regarding the potentiometer shaft position and the helm display. That is good news.

Grey Wolf back to Don Redding:

and these would appear to be correct.
We have the wiring diagrams aboard so we could with care do this check. At this point can I place an order for some test leads in case I need them in the future? (Steve, we need these for the 78.) Shall we have a go?

If you are willing to try, this should allow us to figure out what we need to know.
Power off (you can do this by removing P1 from the control module). P2 is the starboard channel, P9 is port.
Pull the orange plastic top piece straight out of the plug with needle nose pliers. By “top” I mean the end opposite where the wires enter. You should now be able to see the small tabs down toward the wire-end of each sleeve. These tabs capture the sleeves into position.
Make notes of wire positions and colors on your electrical drawing. Each plug uses positions 1 thru 8 only. The wire colors and order should be the same on both plugs.
Use the small blade screwdriver to release one tab while GENTLY pulling the corresponding wire completely out through the rubber insert. Repeat until all 8 wires are out. Repeat for the other plug.
Reverse the procedure to reassemble. You should feel each sleeve click into its captured position.
Reinsert the orange plastic top piece. If it doesn’t go back in easily, one or more sleeves may not be seated exactly right. Force is not your friend here.
We should probably switch to phones once you are ready to test.

OK we will go off and try this.

Just an update on what we have done,
We have changed the plugs over on the Datum control module, so starboard to the port outlet, port to the starboard outlet and it reports as follows:
With the electronics set to control the opposite fin that the display indicates, the helm station monitor shows the port fin, rear end downward and starboard fin centralized. This inversely shows us exactly the same thing as proper wiring. (The starboard fin is locked upward and the port fin is okay). This has indicated to us that the issue is unique to the starboard stabiliser control mechanism and not a generic system fault.
These tests have been done with the engine running and the ram connected as normal
I feel that the problem is at the fin end on the starboard side and looks like it may be hydraulic or hydraulic valves or controls at the fin, what are your thoughts and where do we go now please?

First of all many thanks for your help in helping us diagnose the fault on our Naiad system. It’s great to know that the support from your company is so good.

Please can you ship to our agent in Tahiti the following using the fastest delivery means possible:

I do not have an account, but I am sure I can pay Dashew if this is the easiest way of resolving this.

Pascal,
We have had a few problems with our stabiliser system and I have asked Don to organise delivering to you some replacement parts and spares.

We used Fedex for some other parts and it worked well.
Kind regards,
Peter

With nine FPB 64s + plus the FPB 83 in the water and actively racking up the miles, we have had very few problems with our NAIAD stabilizer gear. Aside from known wear items, like the fin position sensor (potentiometer), and hydraulic cylinder seals (we are talking 10,000 NM plus when we talk about needing preventative maintenance), other than this valve block control issue there has only been one other relatively minor problem.

That we can call on technically savvy NAIAD team members on a weekend, and get this sorted out for Peter Watson and crew so that the parts are on their way Monday, speaks volumes about how customer service should work.

With any luck we’ll have Grey Wolf on her way to Panama by the end of the week.

Both Todd and Mark on the Dashew Offshore team were away last weekend which is why your correspondent was so involved. This morning Don did a recap to bring them up to speed which may put this somewhat disjointed post in context.

Message from Don Redding to Mark Fritzer at Dashew Offshore:

Hi Mark:
We had a report from the boat that the starboard fin froze in the fully counterclockwise (tail-up) position during a moderately rough passage. They were able to manipulate the fin back to center by disconnecting the cylinder from the torque arm, but all attempts to control it with the DATUM control were unsuccessful.

We had them look for connection problems, check the feedback potentiometer with an ohmmeter, test the electronic servo valve for the presence of 24v power, and confirm the correct resistance reading measuring the current loop sensor in the valve. Everything checked out ok, but the fin would only go fully counterclockwise any time hydraulic pressure was applied.

The port fin was working normally. It will do what it can to stabilize the boat in a situation like this, but overall stabilization is compromised because the port fin is 100% occupied counteracting the runaway starboard fin.

The possibilities were (1) feedback failure, (2) control failure in the control module’s starboard channel, or (3) failure within the electronic servo valve. Those are all the active elements involved in operating the fin actuator. The crew was willing to do some rewiring to try operating the starboard fin using the port channel in the control, and vice versa. When they did this, the problem remained with the starboard fin. That narrows it down to the valve or the feedback potentiometer, but the potentiometer seemed to measure ok. We concluded that the valve had failed in a way that we couldn’t detect by simple measurements. A replacement valve is shipping out to the boat today.

We do offer a cable set to make swapping control channels much easier than physically rewiring. See attached photo. Part number is 7100E0054.

This entry was posted on Friday, April 18th, 2014 at 1:04 pm and is filed under Cruiser's Tech Talk. Both comments and pings are currently closed.