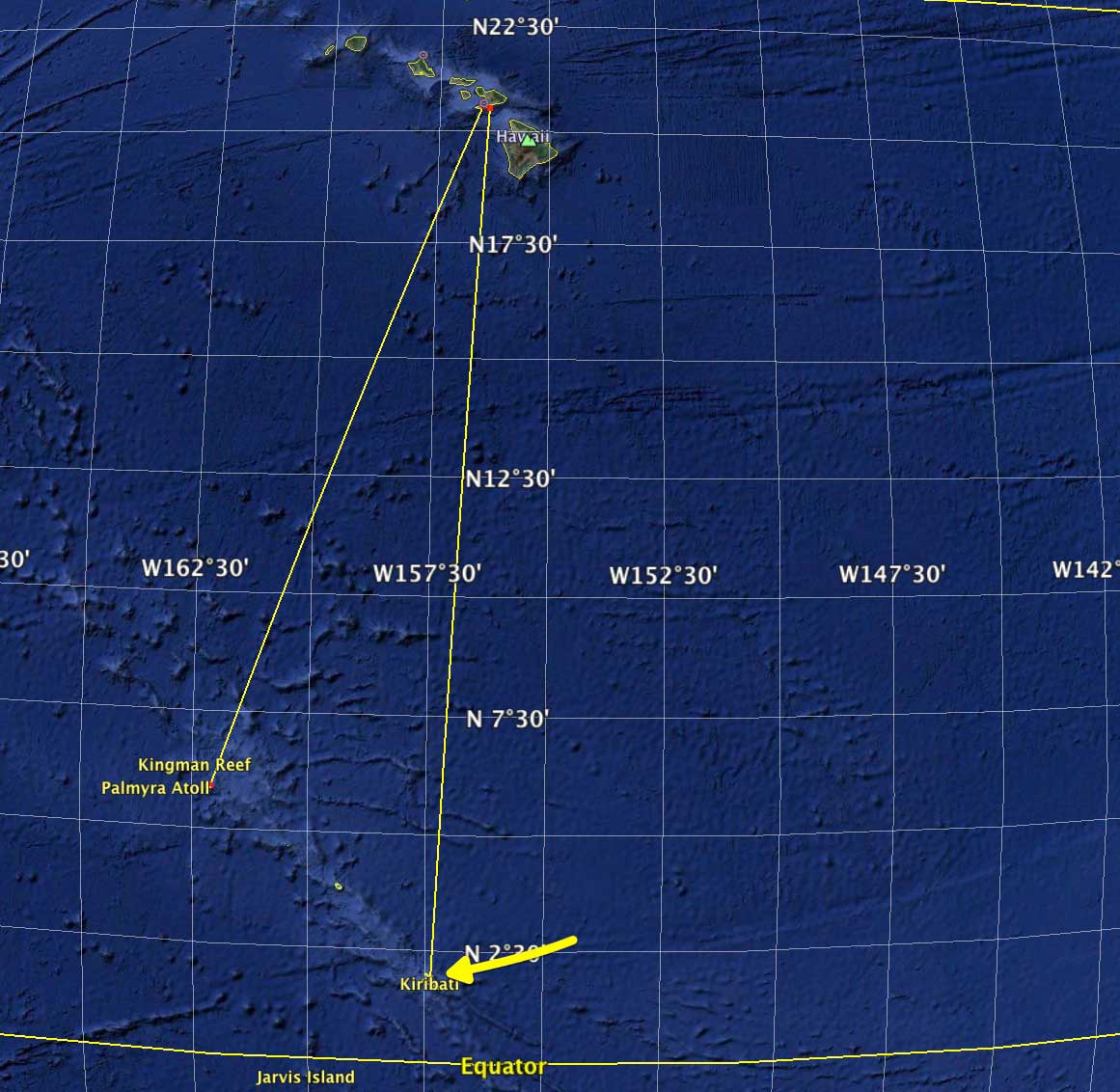 Crossing oceans often leads to compromise between weather, risk, comfort, and what might or mightn’t occur. An example of this was recently faced by the crew of FPB 64-3 Iron Lady. In this post we will look at issues involved, including hurricane avoidance tactics.

Iron Lady is eventually bound for Hawaii, but they (and everyone else passing this way) wanted to stop at Palmyra Island. Most of the year the decision of whether or not to go is based on comfort and one’s tolerance for slogging to windward–Palmyra being dead downwind from the big island of Hawaii.

However, in late August things are a touch more complicated. This is hurricane season in the North Pacific. Tropical cyclogenesis (a fancy way of saying hurricanes starting to cook up) has just begun. It is early in the season, but Mother Nature is stirring.

The distance from Christmas to Honolulu is just over 1100 nautical miles, or five days on the FPB 64. Leave now and you have a path with low risk of tropical storm (or worse) encounters. 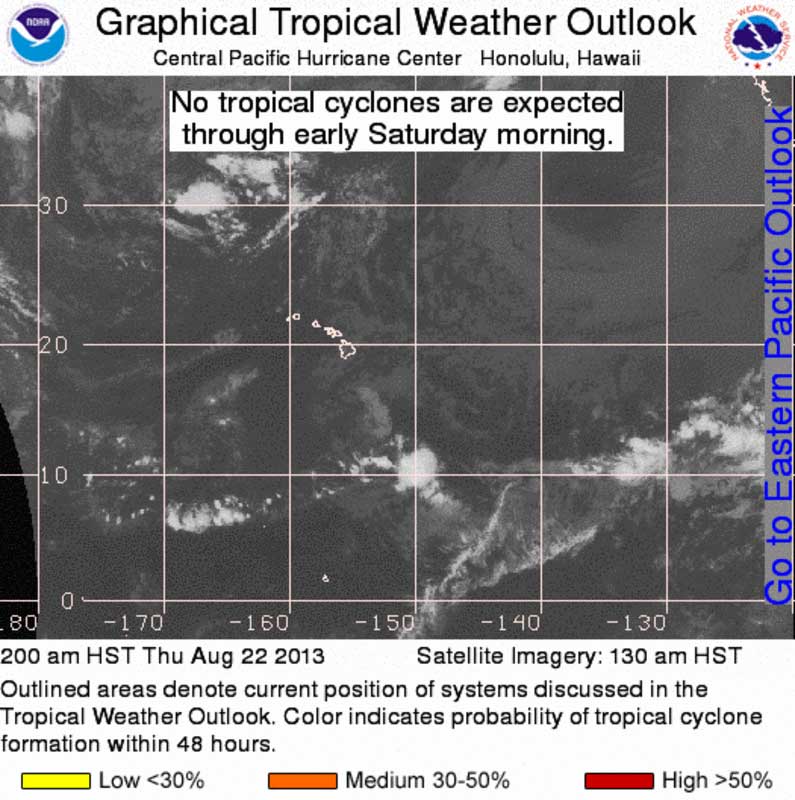 The Central Pacific satellite image for last Thursday morning is shown above. Upper level conditions were not conducive to cyclogenesis, but there is a good chance this will change in the near future. The evening bulletin (still last Thursday) from the Central Pacific Hurricane Center had the disturbed area SSE of Hawaii rated at a 10% chance of spinning up into something. 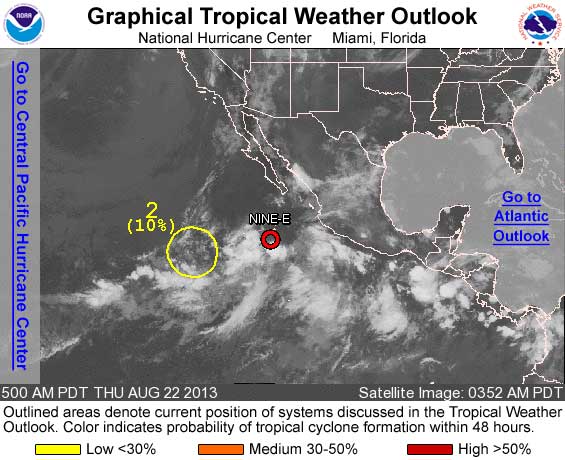 This next satellite image is of the Eastern Pacific. Note there are several tropical waves, a tropical depression (Nine E) forming,and a disturbed area, circled in yellow, that the weather guys were watching.

Palmyra has a substantial allure. It is a wildlife refuge, you need permits to visit, and there are lovely anchorages. When we brought Wind Horse to California from New Zealand in 2005 we had our permits, and badly wanted to visit. It was the same time of year, and weather conditions were similar.

From Palmyra to Honolulu is about 975 NM, so roughly a day closer. It is also 280 NM west of the track between Christmas and Hawaii, dead to leeward of Honolulu.

In our case we decided to take advantage of the clear path north, and regrettably bypassed Palmyra. There were several reasons for doing this, the most important of which was the fact that Wind Horse was relatively new, with just a few thousand sea miles under her keel. 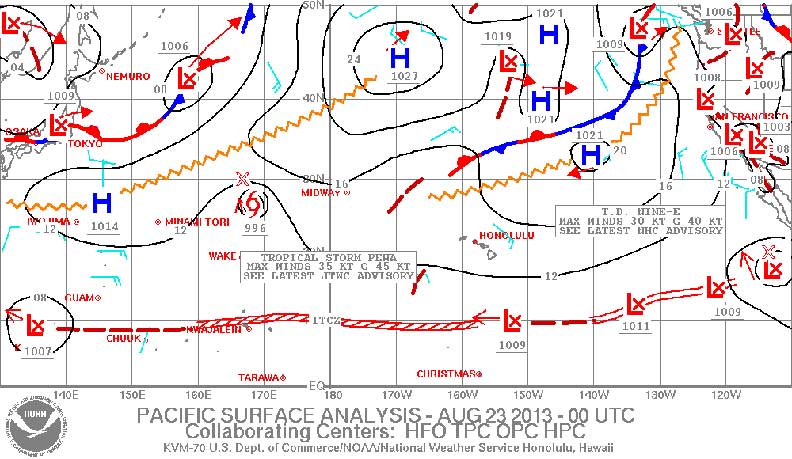 To complicate things a little further, here is a current Pacific surface analysis for the end of last week. The area we are interested in is East of Hawaii. With Northern Hemisphere tropical systems rotating counter-clockwise, and tracking in a west-to-northwest direction in this part of the world, anything west of our position is of less concern than potential problems to the east.

Here it looks clear. But that series of Lows along the ITCZ (doldrums) shown just north of the Equator indicates we may be in for increasing tropical activity.

Next, let’s hear from Rick Shema with his weather guidance end of last week for Iron Lady.

Thank you for your note and here is your daily assessment.

The tropical picture is a little more intense than yesterday. There is an area of disturbed weather about 600nm south of Hilo. The relatively small area contains thunderstorms, heavy rain, and downdraft winds to 40 kts. There is little chance of further tropical development within the next 72 hrs and possibly longer.

By the time you are ready to leave Palmyra, this system should be out of the routing area.

The ITCZ has intensified west of 145W as with the disturbed weather described above.

Convective activity in the ITCZ is also a routing concern as well as TCs. Both need to be considered when choosing a window of opportunity.

Further east, Tropical Depression Nine (TD-09E) has formed in extreme EPAC. It is too early to tell if this system will impact your route.

I like your idea of easting early to afford a better relative wave angle.

Just so I understand, is it your belief that a longer term time at sea now is more risky than a shorter time later in August or September. The time transiting tropical cyclogenesis regions is the same either way.

Side Bar Note: At this stage, Pilot Chart data are not usually an indication of expected conditions as a short term predictor, because the data are historical averages over many decades (~100yrs). In this era of climate change and variability, strategic planning phase of long range voyage routing, a much shorter and more recent period of record (~10yrs) may provide better guidance. Regardless, a ten day forecast, with all its uncertainties, is often a better tool at this point than any climatological scheme, long or short.
Best Regards, Rick Shema 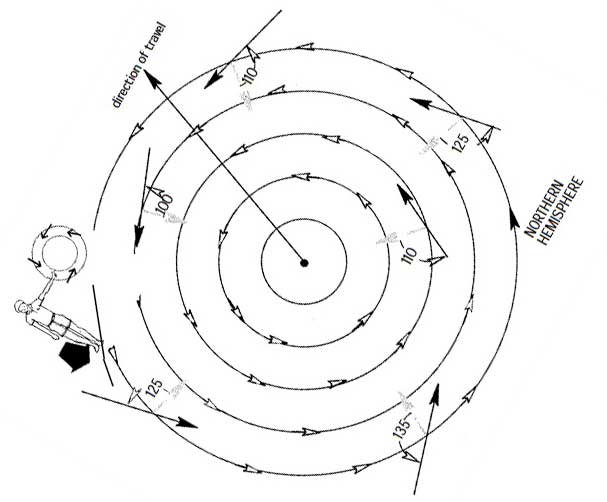 Now let’s take a look at the circulation pattern around a low pressure system in the Northern hemisphere. This sketch is from our Mariner’s Weather Handbook. Put this weather system to your east, with it traveling west to northwest, and the conundrum of crossing the hurricane freeway of the Central Pacific ocean in August becomes a little more clear. For those of you interested in reading more about hurricane avoidance tactics, there is a pdf copy of this chapter from Mariner’s Weather Handbook available here.

There are many factors that go into making a decision like this. Some of these depend on reading the weather correctly, but the key ingredients revolve around boat and crew.

Iron Lady at this stage in her cruising career is far more mature than Wind Horse was when we came through this area in 2005. Iron Lady now has 16,000+ nautical miles behind her, and a skilled crew aboard who know her well.

You already know the decision aboard Iron Lady.

We are very much looking forward to seeing their photos of Palymyra. In the interim, the photo below is of Wind Horse anchored at Fanning Island.

This entry was posted on Tuesday, August 27th, 2013 at 12:01 am and is filed under Dashew Logs, four, FPB 64, Marine Weather. Both comments and pings are currently closed.