Flying Toward The Future 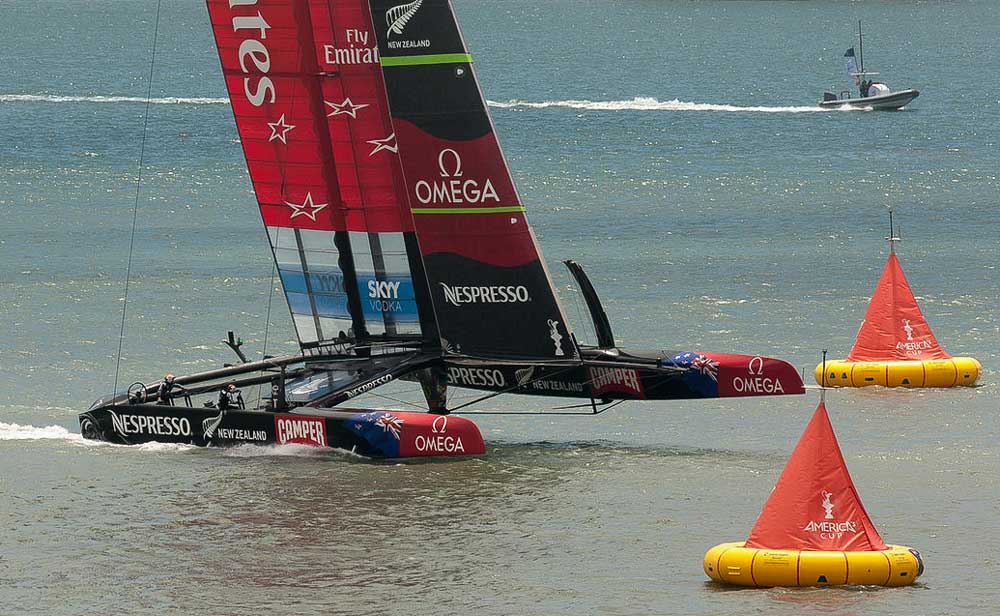 We’ve had one of those rare life altering moments, a point in time after which you know nothing will be the same. Having started messing with multi-hulls in the really olden days as we did, you might think the sight of a wing sailed cat crossing a finish line doing 20 knots upwind would get us stoked. 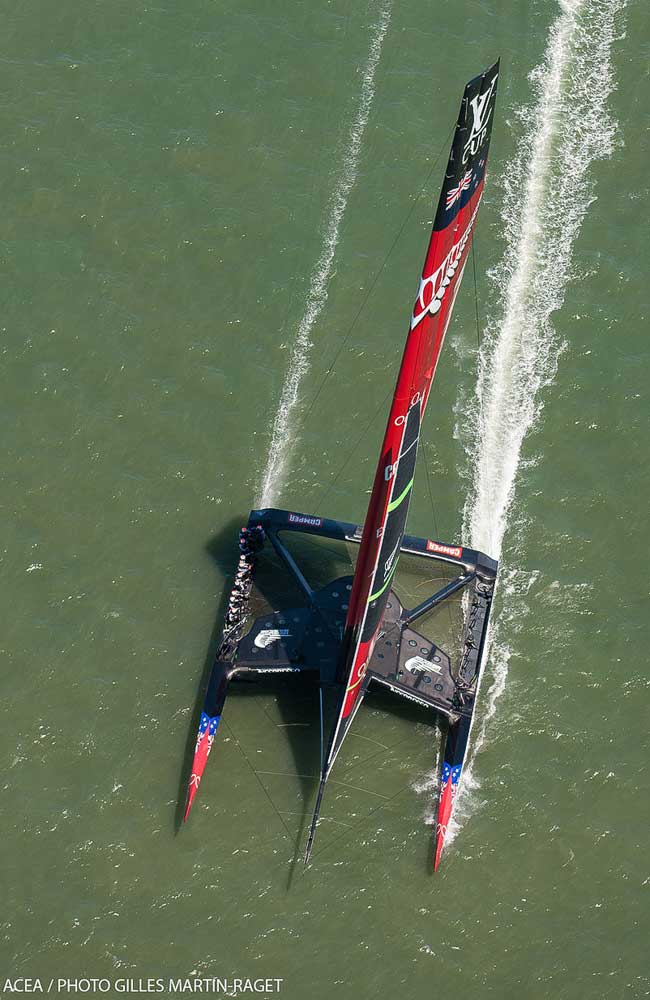 Or maybe this shot of an AC 72 beam reaching at an easy twice wind speed. But while our multi-hull CV is a long way from current, what we have shown you so far, while cool, fails to blow us away. Hey, we used to do twice wind speed–admittedly in optimum conditions–35+ years ago. And we had a (very) crude wing sail in 1969 and watched the C-Cat class develop these foils in the 1970s. 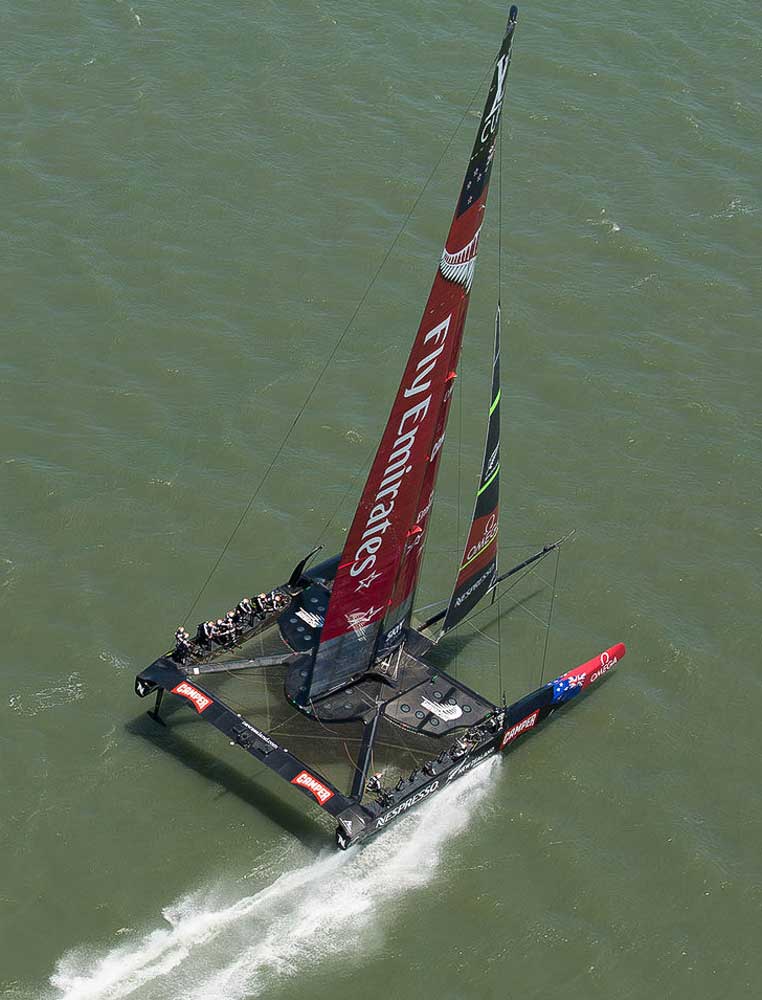 But this, gentle reader, is something else. Look closely at the leeward hull. 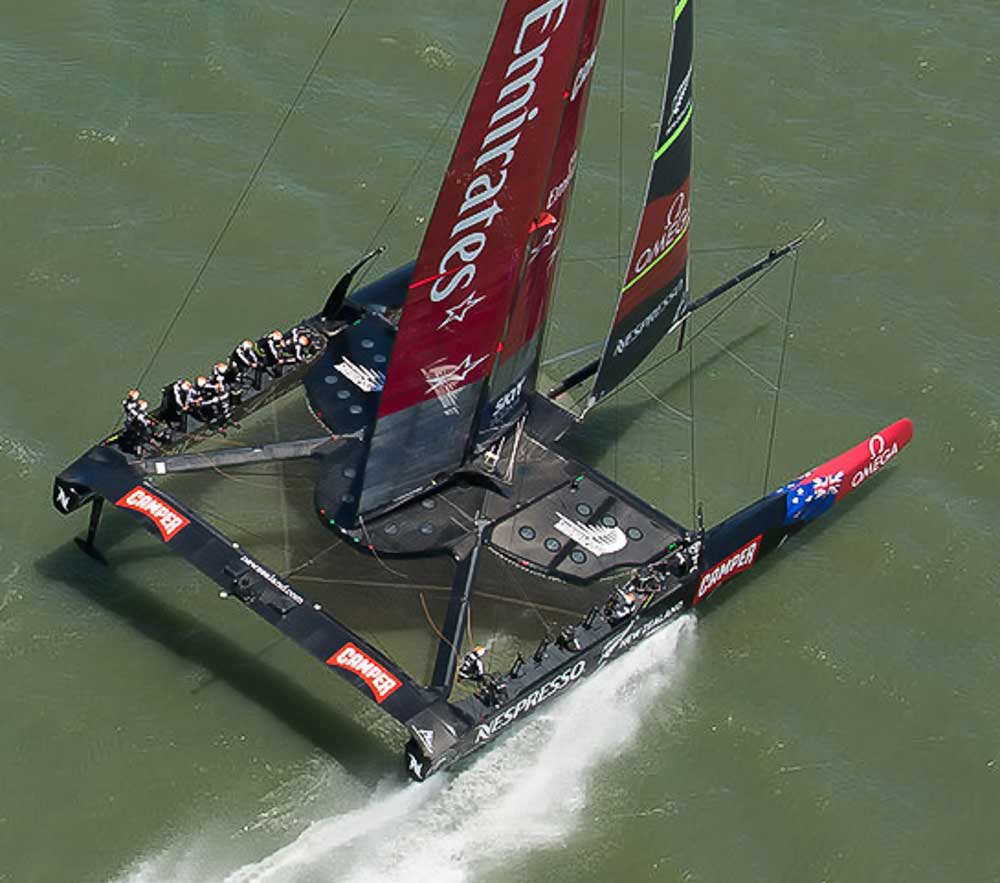 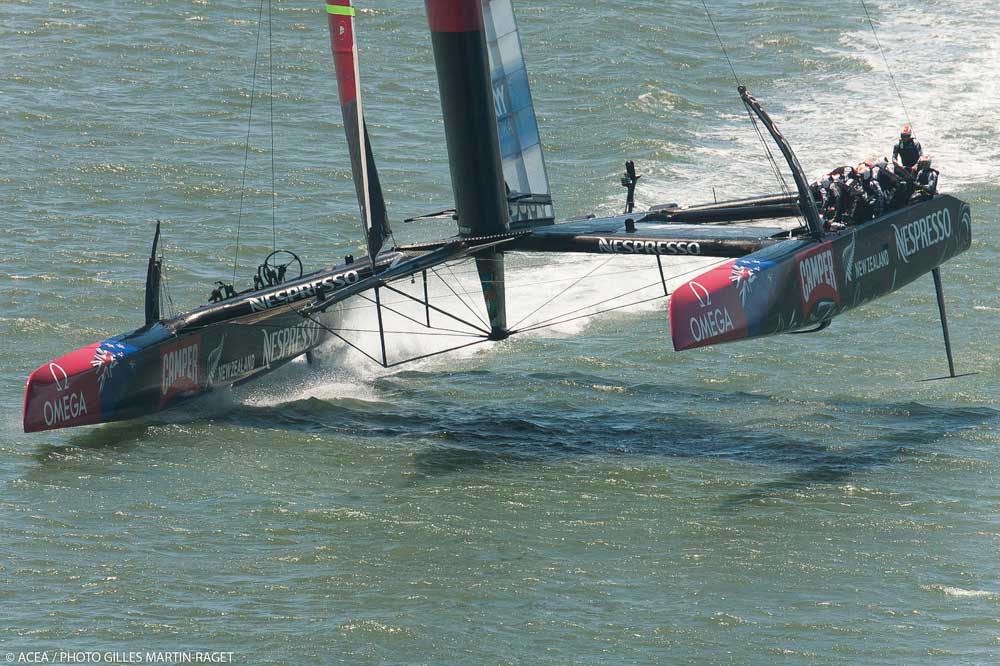 Have you been watching the first of the Louis Vuitton selection trials for the America’s Cup challenger on YouTube? Sure, the Kiwi challenger sails alone, the Italians protesting for some reason. But having just watched the most astonishing display of boat speed and sailing on the edge of disaster, making look easy what we are 100% certain represents the supreme achievement of man on water, we’d probably not want to be embarrassed by our relative incompetence either (if the Italians show up and make a race of it we’ll apologize).

If you have raced sailboats you will have at some point used the Vanderbilt time on distance race start method. The Kiwis do so as well, going from seven knots to 36 knots in seven seconds as they hit the starting line at full tilt. 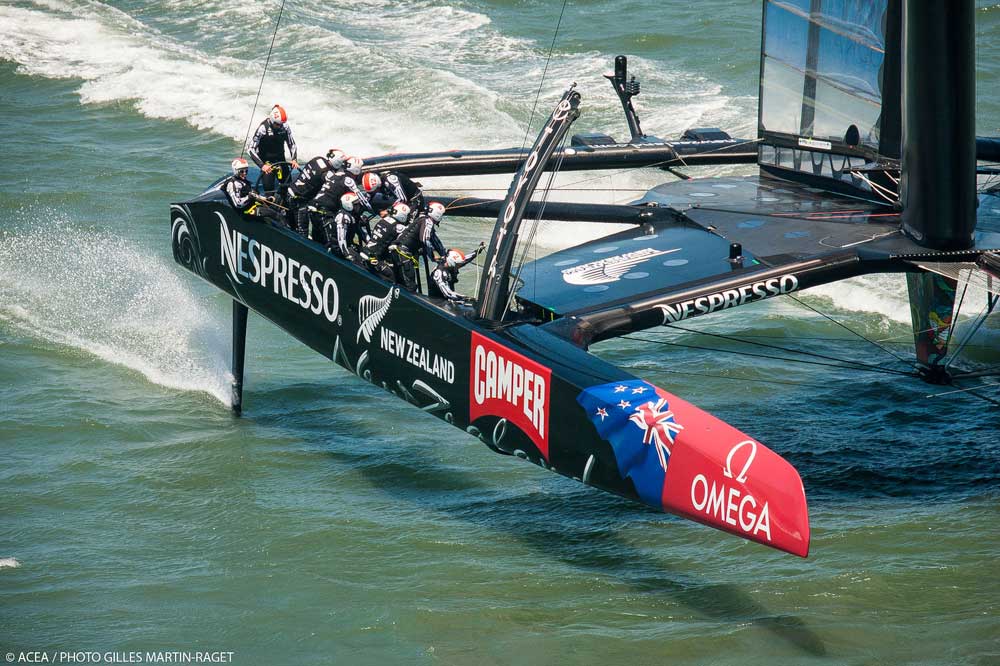 Flying momentarily? How about on all angles except beating, and our guess is that is not far off. Jibing and rounding marks while doing 30 to 35 knots or more, in less than 20 knots of breeze, still foil born? A piece of cake. Hitting 43.26 knots during this race, that’s 49.98 MPH! And they are probably not showing all their boat speed at this point. 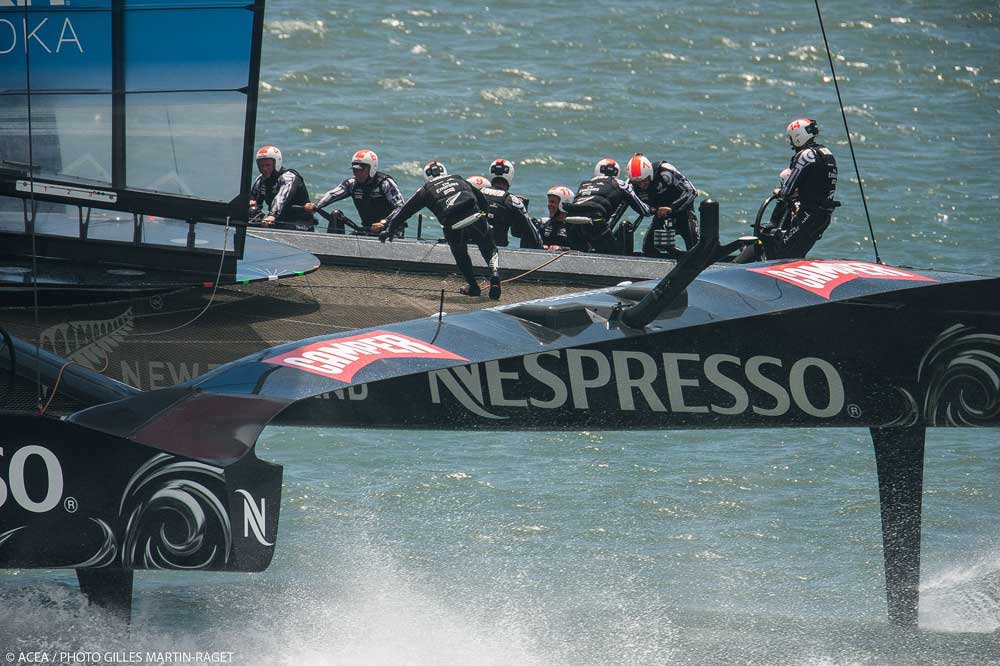 Sailing a multi-hull, wound up on apparent wind like Team New Zealand has been showing us, takes the highest degree of coordination between the driver, and the folks controlling the wing. As the boat accelerates keep in mind that the force of the wind builds with the square of the increase in wind speed. Small changes, up or down, have a huge impact on horsepower. Just driving off with the puffs, the way you would in a conventional cat or high performance dinghy, is not going to get the job done here. The wing trimmer, with his varying controls of the different wing elements, has to de-power in precisely the right manner. 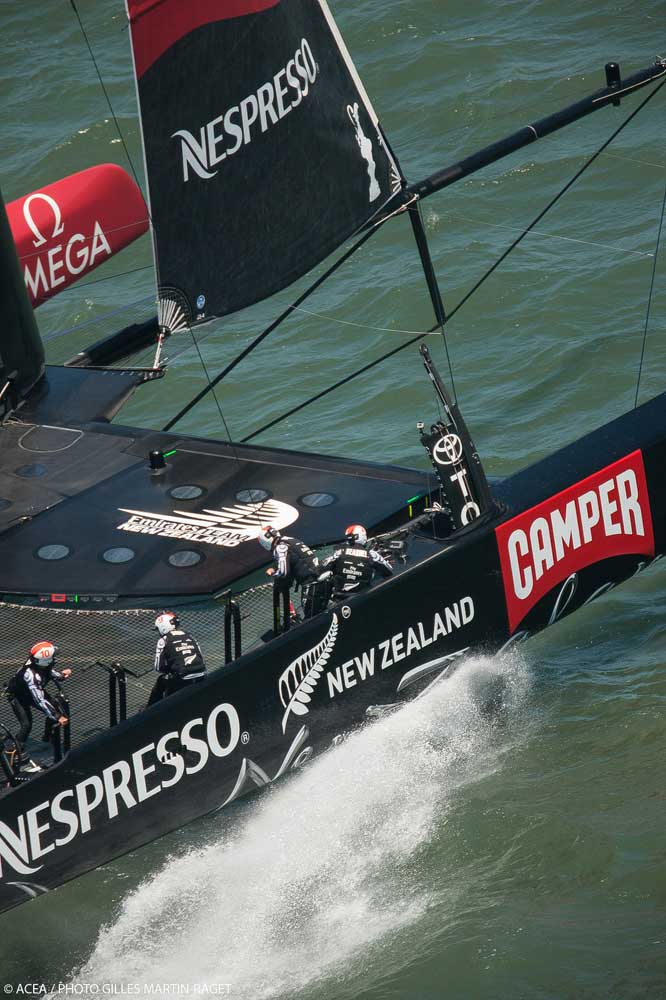 Anything less than perfect coordination will lead to instant disaster.

Today’s race demonstrated a taste of what is coming. The camera work, tight shots to long views, was superb. The commentary most excellent. 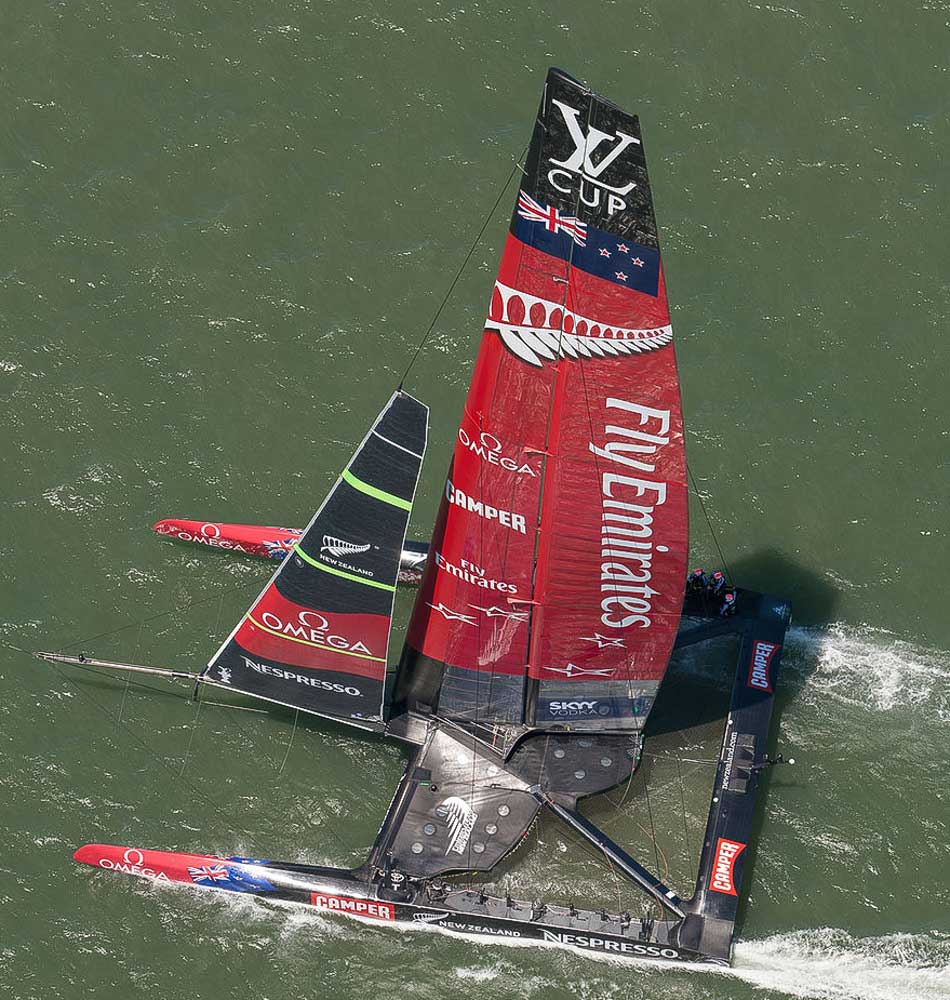 And the technical details – about which much more in later posts – simply astounding.

Our congratulations to Stan Honey for putting together an amazing presentation, the scope of which we’ll guess is yet to be displayed. To Grant Dalton, and the members of Team New Zealand, a hearty well done. If the cycle of the Cup were to end tomorrow, we’d say what we have seen made the effort worthwhile.

Russel Coutts and Larry Ellison have come in for a major helping of derision with the choice of high performance cats, and the lack of competition. To the naysayers we say, admit they were right. Even if there are only two competitive yachts racing in the end, this will have been the most amazing of sailing spectacles. 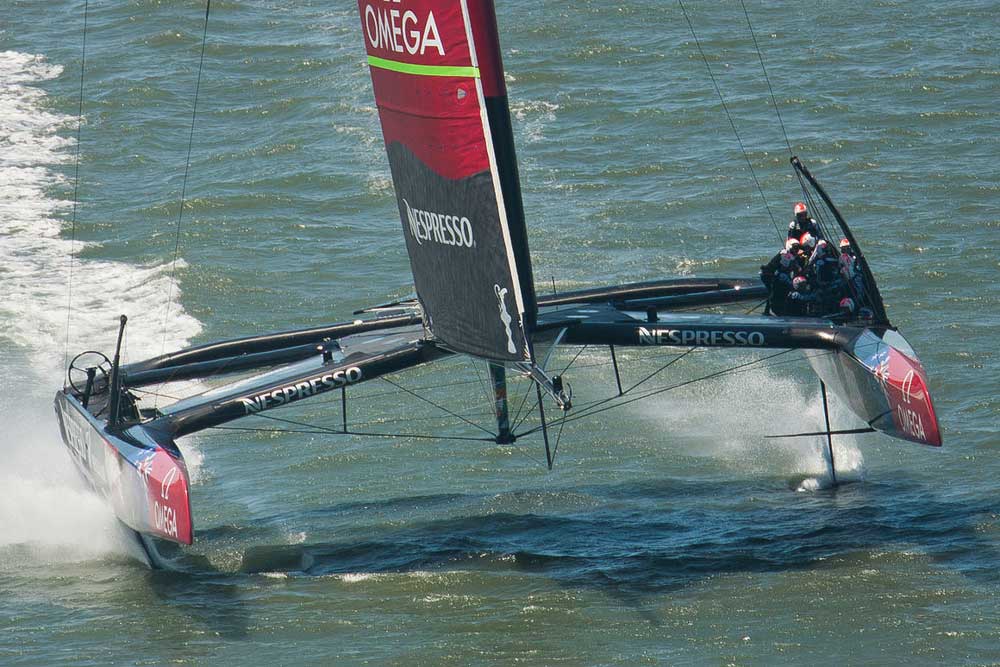 It suits us to a T. We think it will you as well.

This entry was posted on Tuesday, July 9th, 2013 at 8:58 pm and is filed under Dashew Logs, four. Both comments and pings are currently closed.


13 Responses to “Flying Toward The Future”