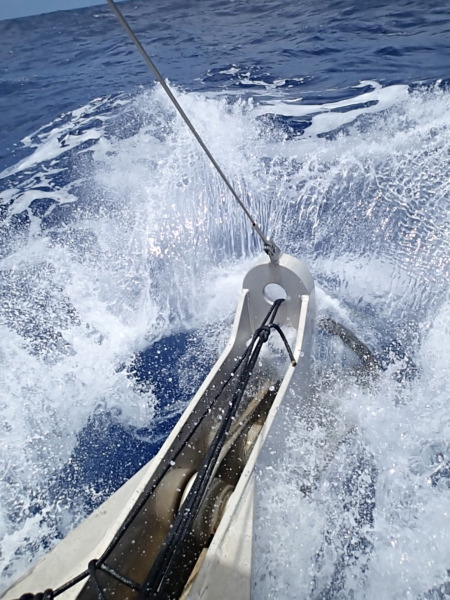 FPB 64-3 Iron Lady is Canada bound from Hawaii, a relatively short 2400 NM (+/-) trip, depending on how the Pacific high treats them. Pete Rossin is filling us in on weather and vessel performance data. Information from the last five days follows:

Full fuel – less then half water. Re alternators, they are up and down so some of the difference between 1650 and 1700 was due to the alternators.

Winds holding steady SSE at 10 knots and barometer is rising – 1023 now. Sounds like high is building and we are motoring into the center of it. Hope it holds true – it is lovely. To hell with 35 knots on the nose – with short period, 3 meter seas was bad enough. That is why we bore off a bit and slowed down. Holding around 10 knots at present.

Distance from Ko Olina is 652 nautical. Some evidence of the low west of us but looks like it is stalled against the high. GRIBs look good for the next 3 days at least. Beautiful day today but surfing looks unlikely for the time being, Dude.

Nobody can say we don’t eat well on Iron Lady.

If it sounds like the last two days, it is. Looks like we are tracking the high and staying in the same relative position to it. Some indication that winds may be clocking SSE so it may be moving on.

Currents stronger then expected with speeds down to 8.5 knots at times. Seems to be eddies as it comes and goes.

As a private pilot and long time mariner, I have always studied weather. While not a professional by any means, I am a serious student – especially when the nearest land is over 1000 nautical away.

We have lots of high end weather resources on board including the advice of Rick Schema, a professional weather router. Via our SSB, we can download GRIB files, satellite pictures, surface analysis charts, 500 mb charts along with forecasts including wind and waves. If need be, we can fire up the sat system and use the internet but that gets pretty expensive at $10 per MB.

At any rate, I routinely try to develop my own forecast based on things we strictly have access to on board before I run to the other stuff. It is an interesting and fun exercise to see just how close you can come – and there may come a time when that is all you have.

So my forecast based on the onboard stuff goes as follows. We have a large high pressure system east of us that has been generating SE winds for a number of days. With a stable to rising barometer, that means we are maintaining the same relative position to the high. The shift to the SSE indicates that we are slowly climbing up the back of the high. That also puts a low pressure system west and a bit south of us. Yesterday, we had high level cirrus clouds in that direction but jet contrails over us were stable and not dissipating, so the winds aloft of us were light. That suggests that the low is being blocked by the high.

Today, we have high level cirrus, mid level stratus and scattered low level cumulus clouds – all indications that the low is moving closer to us. Looking in the direction of the low there are a few scattered rain showers.

So the Rossin forecast for the day is that a stable high is blocking a weak approaching low. We are moving in to a weak compression area between the high and the low, which suggests that the winds will continue to clock southerly – a good thing on our current heading as it puts the winds and waves off our stern quarter.

Looking ahead, I would expect the low to track northeast over the top of the high, which would bring our winds more westerly – better yet.

The GRIBs pretty much confirm this view, but one thing is certain – and that is that the weather is never certain – especially more then a few days from now.

Boring weather and it appears to look good all the way.  LOVE IT.

Weather continues as forecast by Rossin onboard eyeballometric guesstimation and GRIB files. COG is 030, barometer is 1025 and falling slowly, winds clocking south at 15 to 20 knots. Seas 1 – 2 meters from the SE. Occasional short surfs to 12 knots.

High slowly departing while low continues to be blocked by the high causing a slight compression zone. Low will probably track up and over the top of the high.

Forecast calls for winds clocking SW and building to 30 knots right off our stern. Surf’s up, Dude!

Extended forecast calls for variables as we approach Puget Sound.

The only good reason I can think of for going uphill occasionally is to remind you how good life is with the wind and seas aft of the beam.

Still early. Winds just building to 25 knots off the stern quarter. Seeing lots of 11s and 12s surfing. Tomorrow should bring solid 30 knots and some higher. Will keep you posted.

0800 position Hawaii plus one time is 40 59 N  137 55 W – 1467 out of Hawaii with about 800 nautical to go. Daily run is still around 216 – still fighting currents. Running 1650 RPM, fuel burn just over 21 liters per hour as compared to almost 26 liters per hour when we were running at 1700 with little appreciable gain in speed. 1650 appears to be the optimum normal cruise RPM for us. Thank Peter for the tip on the Deere fuel consumption readout – a big help when doing calcs.

Weather is leaden grey overcast with light rain. Temp around 60 degrees. Barometer fell to 2018 and now is on the rise again at 2020. Winds have veered SSW and rose to 25 knots – now back down to 15 knots. May come up again after the rain – we will have to see. Seas 2 meters with an occasional 3 – a few surfs to 13 knots but that is about it.

May have to put the Beach Boys on hold.

Barometer has started to fall again rapidly and is now down to 1015. Winds, while light at this point have veered WNW. GRIBs show 20 – maybe some 30 knot winds in this for a short time but did not show WNW for us. By tomorrow the GRIBs show easing to variables.

We are in for the ride now so we will just have to see what comes.

Sorry Dude – looks like the surf’s down. No cowabungas today.