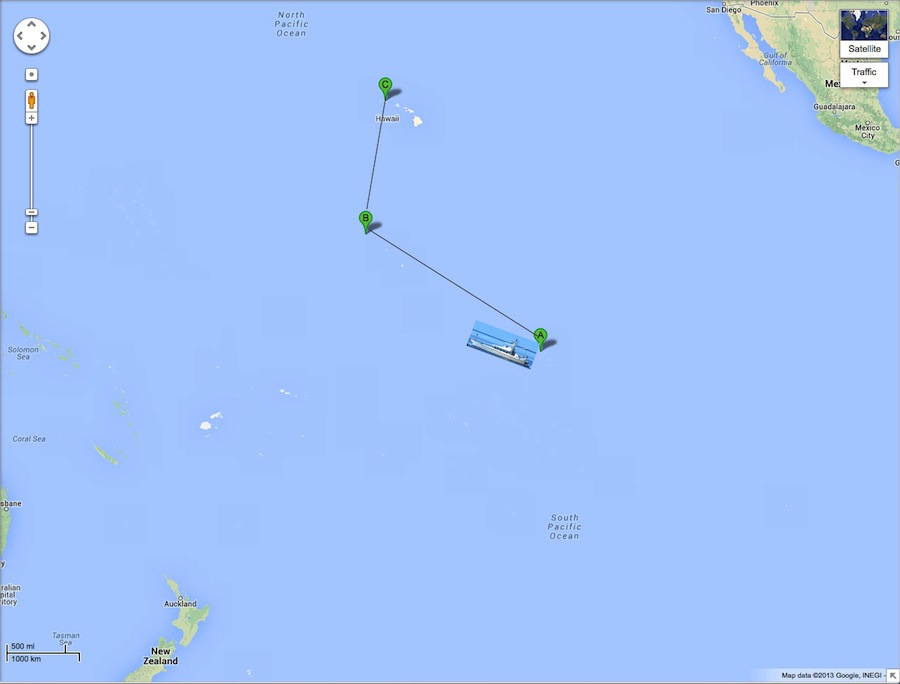 Mark Fritzer continues his reporting from Iron Lady after their first day at sea:

We have completed our first 24 hours at sea, having traveled 230 miles. We should cross the equator in roughly 56 hours. I had the opportunity to land a beautiful 25 pound Mahi yesterday evening. While towing the boat lure, Shabby, she hit like a freight train headed in the opposite direction. After a brief but impressive acrobatic display and several good runs, she came flying at the boat and Captain Steve made an impressive jab with the gaff, bringing her aboard in a flurry of slapping tail and spraying seawater. Just like that, the sea granted us several tasty meals.

To put it into perspective, on the last voyage I made from Seattle to San Francisco we burned 7 litres/hour in a Taswell 43 with a 4 cylinder turbo at 6.2 knots and NO, there wasn’t any wind until the bridge.

One of the things I am hoping to accomplish on this trip, is to come back with first hand perspective from a technical standpoint of how the systems work in the real world, and any improvements that can be made. The opportunity to experience one of our vessels from this standpoint is extremely valuable. Having spent most of my life messing around and riding in boats, I am extremely impressed with the boat and look forward to the next few days at sea. Cruising along at 9.6 knots with the seas aft of the beam in most boats would typically mean continual surging through the boat, as the stern is pushed up and the boat propelled forward until the bow locks in and veers off one way or the other. Then a reduction in speed as the wave slides by the stern; which begins to drop as the bow rises and the wave passes until the next one starts the process again. I am completely amazed at how level the FPB stays in these kinds of seas. Sure, the boat wanders and veers a bit, but the surging, hobby horse feeling common in these types of conditions is pretty much non-existent.

When we left on our voyage, the ambient air temp was 87°F and the seawater temp was 83.6°F. Our batteries were sitting at 86% state of charge at 27.83VDC. The engine was running and the alternators were charging at 155.5 amps and 146.6 amps, since all of the air conditioners were running in addition to the normal 24VDC loads. The inverters were supplying the 230VAC power. Of the roughly 300 amps of available alternator output, 130.4 of them were charging the batteries. The engine room ambient air temp quickly rose to 113°F and has hovered there ever since.

One of the things we have heard from clients is their concern over high engine room ambient temps while in the tropics. Because of this, we have theorized the necessity of “de-rating” the alternators to ease off on the heat buildup at the remote rectifier assemblies when running under exactly these conditions. Therefore, I let the engine room get good and hot for 45 minutes, donned the earmuffs and entered armed with the FLIR i7 thermal camera, digital camera, flashlight and IR temp gun with laser pointer as a second opinion.

What I found was astonishing. When I return, I will try to post some of the thermal snapshots I was able to capture, as this tool is INVALUABLE to anyone wishing to track down potential thermal issues. First I looked at both alternators, their bearings, wiring terminations, lugs and fastenings. On the DC ground wire, you can see where the lug was attached and the natural ‘lay’ of the wire made it want to bend in the opposite direction of its path to the shunt, so the installer did what most any other tech would do and gently ‘bent’ it up into place. However, that small ‘twist’ in the wire actually makes for a slight point of resistance and the temperature is roughly 5°F warmer because of it.

We reduced the air conditioning load and brought the alternator output down from 150 amps to around 100 amps each. With this, we found we could run the master and one great room air conditioner while still putting roughly 125 amps into the batteries. We ran this way for roughly 45 minutes, during which the battery state of charge came up to 96% and the accepted current dropped to 48.1 amps. The alternators dropped their output to 67.6 and 59.8 amps. I found the AC connections at each alternator dropped roughly 10°F and the same at the rectifier assemblies had dropped down to 168-172°F across them. I am finding this FPB runs pretty consistently at 60-70 amps of output for each alternator, with the batteries fully charged and systems running as the owner likes to have them.

Meanwhile, I need to go work on my tan.