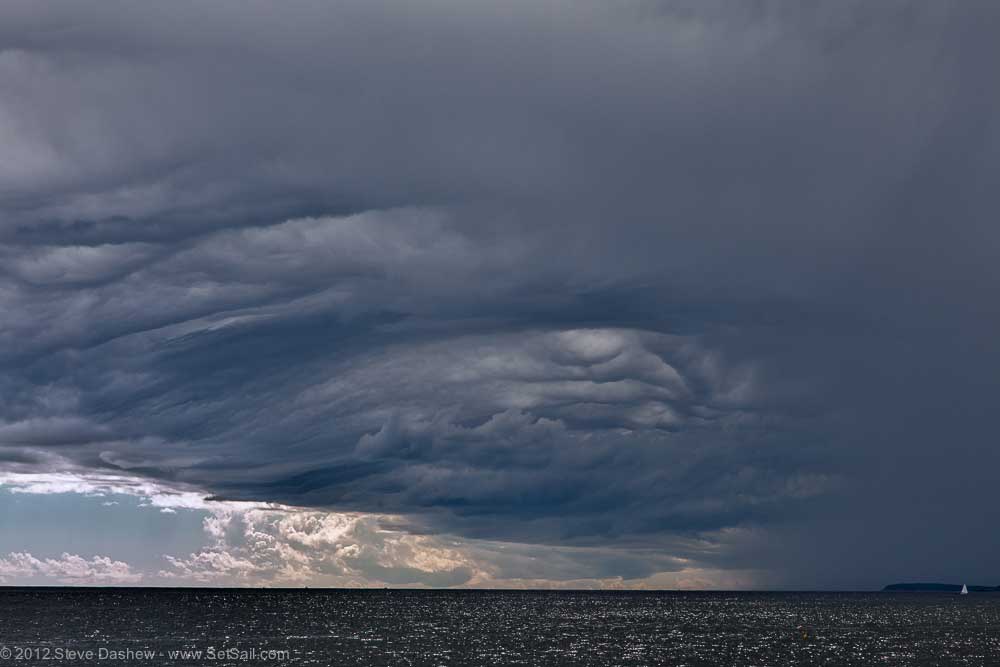 Pete Rossin, enroute to Papeete on FPB 64-3 Iron Lady, gives a quick lesson in weather analysis using what you see rather than outside outside sources.“Thought I would delve in to the topic of weather a bit. We have all kinds of resources available to us – a professional router, weather fax, and grib files from a variety of sources. It turns out, however, that we can do a respectable job with some very traditional instruments. These include a recording barometer, true wind speed and direction, and eyeballs out the window looking at cloud formations.

For those who have an interest, we can step thru a simple exercise to show how it works. Take a sheet of regular printer paper and draw a large circle on it. In the center, place the letter “L”. At the top of the circle, put a directional arrow pointing to the right. At the bottom of the circle put an arrow pointed left. In similar fashion, put a down arrow at the 90 degree position and an up arrow at the 270 degree position. That completes the cardinals, now just fill in the positions in between with arrows following the same direction as the ones above and below it. That is the diagram of the winds circulating about a southern hemisphere low.

Place your low on a table and find a short straight object to represent our boat.

Two nights ago, we had winds from the northwest. If you look at the low on the paper, this corresponds to the arrow direction at 45 degrees. Place your little boat there and point it tilted slightly upward from horizontal on the bow end (right side). This corresponds to our desired track. From this little picture, you can see that the wind was on our stern port quarter and that the center of the low was south and west of us.

By the following night, the winds had gone westerly so now place your little boat (still tilted the same way) at the top of the circle where the arrow points from the west. You can see that the wind was now more behind us and the centre of the low was now pretty much directly below us. From this, we can deduce that the low is moving in an easterly direction faster then we are. What we don’t know yet is whether or not the low is headed toward us (north) or away from us (south). To tell that, we watch the barometer and possibly the wind speed. In the case of the barometer, the pressure rose from our first position to our second position and the winds were decreasing in strength. Pretty good indication that the low is moving away from us to the south.

Now we know that the low is beneath us, and it is moving easterly faster then us and south away from us. As this happens, we can generally expect improving weather and winds backing to the west and southwest and easing.

Similar constructs can be made for high pressure systems which have the arrows reversed from the ones on our low.

Well how did things work out? Pretty much as advertised. We had a weak front extending from the low stalled against the high which kept us in occasional showers. Then yesterday, the front moved on, the winds went west and dropped, the sky cleared and the barometer shot up indicating building high pressure and fine weather.

Until midnight. When I went off watch at 2000, things were perfect. I woke up at midnight to sound of waves slapping the hull, wind, and rain. I went up to the salon and Roger was going off watch and Steve was coming on. It was blowing 30 plus higher gusts, rain and steep short period waves. The event lasted until about 0300 just before I came on watch at 0400. By 0400, the winds were back down under 10 knots and seas were dropping. Well so much for our forecasting (and everyone else’s because they didn’t see it coming either).

Next morning, things became clearer. The front apparently stalled again and a small disturbance appeared out of nowhere along just where we were located. At midnight the barometer was 1020 when the squalls hit. Over the next 3 hours it dropped 3 millibars and by 0800 this was up a total of 5 millibars and rising rapidly with the winds dropping again and clearing skies. It was just that small transition area entering the high that was the issue.

The little system was no big deal and we would not have altered course to avoid it had we known about it in advance.  The point here is that despite your best efforts, you do get surprised.  Roger said it best – never be complacent when you are at sea.

Shabby is out for his morning swim – the waves were a bit much for him yesterday but he tried.  Hopefully better fortunes today.

Still on the great circle route.  COG is 48 degrees and we are 900 nautical out from Whangarei still maintaining close to 10 knots average.  Winds are light at less then 10 knots with confused seas less then 1 meter.  Overcast but looks like clearing ahead.
Cheers.”