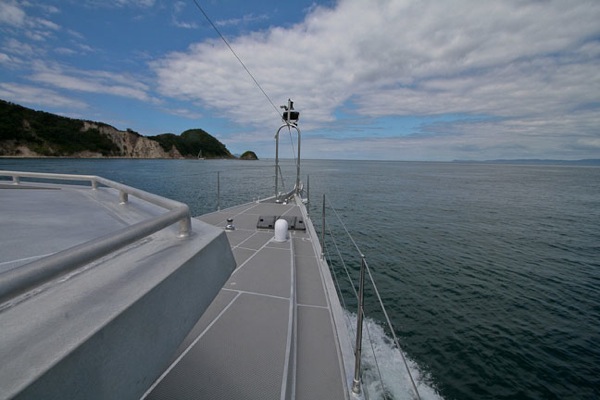 We have the complete set of data now from Circa on Iron Lady’s second set of runs. The data looks as expected for her displacement running in deep water and calm conditions (numbers are on the  next page). She also appears to be a touch quieter, although without soft goods installed this is difficult to tell for sure.

The table above represents the RPM range where the boat would normally be run. Keep in mind that these figures are going to be impacted by the boat being at full displacement (where cruising boats tend to operate) and by auxiliary loading for hydraulics and DC power generation. You would also knock off for rough water and wind drag (or add if the wind and waves are behind you). Anyway you slice these, they are efficient and in accord with the visual impression from the bow and stern wave photos. 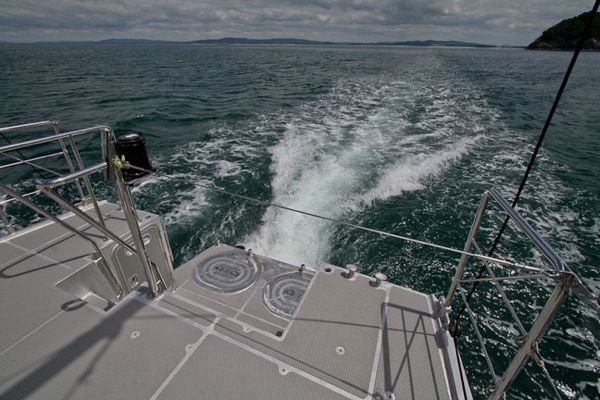 Speaking of which, the picture above, and second wake shot in the previous post, were taken at wide open throttle, that’s 11.6 knots, or a speed length ratio of 1.45. You can force almost anything to this sort of SLR with enough oomph. In the case of the FPB 64 this represents 235 horsepower.

You are going to think us obsessed with bow and stern waves (which we freely confess) when we tell you this is an amazingly sexy transom release of stern wave pressure.

This entry was posted on Tuesday, February 8th, 2011 at 12:05 am and is filed under FPB 64 Sea Trials. Both comments and pings are currently closed.