FPB 64-6: How To Make A Winter Crossing of the Atlantic In A Difficult Year 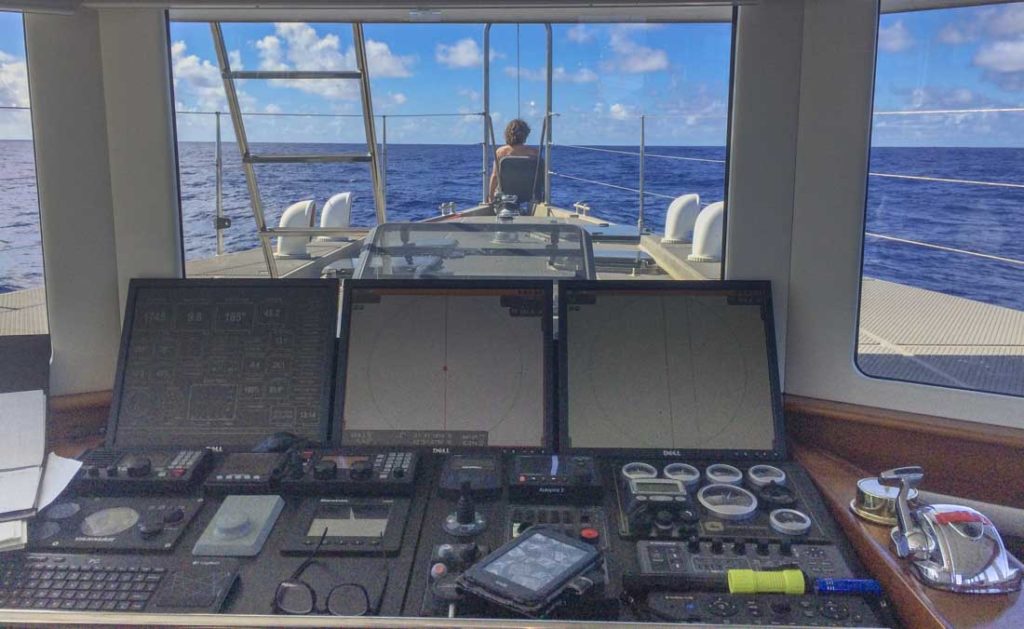 FPB 64-6 has just completed a winter crossing of the North Atlantic, which at one point featured hurricane strength compression storms in east and west regions. She did so in classic fashion, taking advantage of the weather when possible, but always with a bailout option if the forecasts turned negative. There are a number of lessons for us in this passage.

The normal approach to crossing East to West in the Northern Hemisphere winter is to depart from the Canary Islands, plot a course well under the North Atlantic High to protect yourself from the storms further north, and ride the trade winds to the West Indies. We did this along with the ARC in FPB 83-1 Wind Horse (for more info on that passage click here).

The weather this winter across the North Atlantic has been as complex and risk-filled as we have ever seen. So when Steve Parsons began passage preparations, he had been watching the patterns since before topping off the fuel tanks in Gibraltar. We chatted with Steve while he was still in the Canaries. 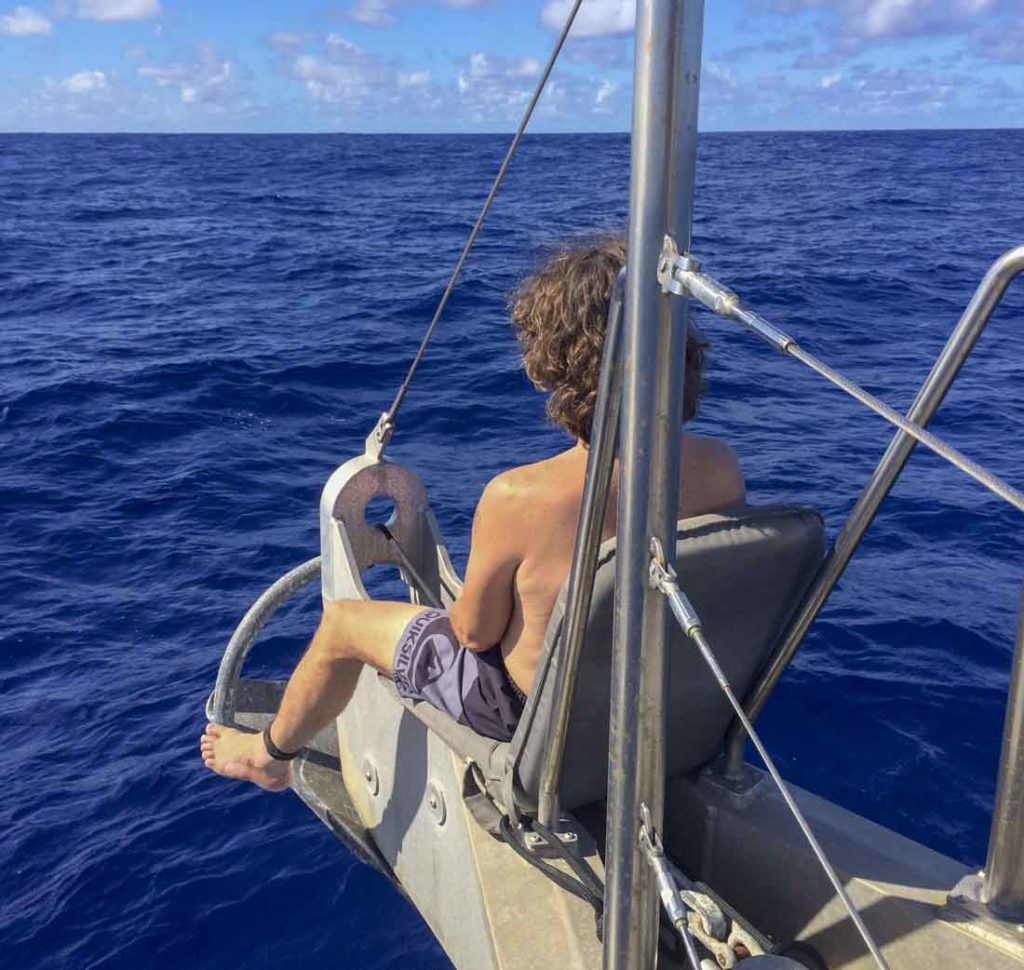 Parsons (shown above mid-passage) uses a mix of on-board forecasting based on observed conditions, radio fax products, together with raw GRIB files. We aided the late stages of the passage using PredictWind.com Pro, along with the 500mb data from various sources.

The key to this routing is the average speed a vessel can maintain for a given portion of the passage.

The tricky part of the latter half was a sweet spot of westerly flow which was aimed almost directly at Parsons’ destination, St Augustine, Florida. But just north of this the wind was on the nose, with various swells from storms on both sides of the ocean potentially mixing in.

There was also the threat of an upper level trough rotating in and creating compression storm force wind, possibly “cutting off” and staying in the area for several days. 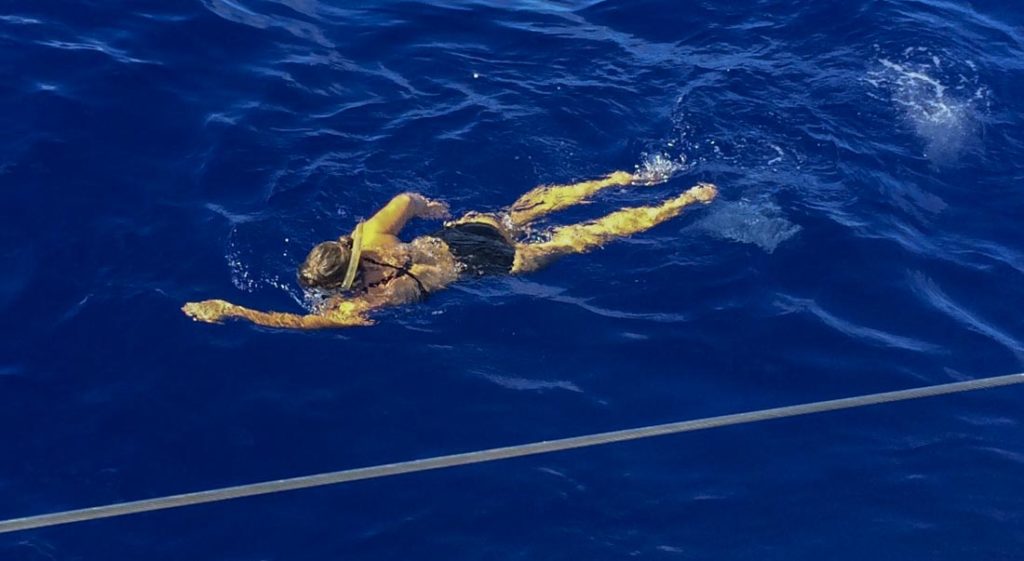 (Above: Stopping during a calm period to check the bottom and prop for growth shows that although conditions to the north were seriously ugly, FPB 64-6 remained primarily in a sweet spot of weather.)

On December 6th, while FPB 64-6 had the option of heading south and away from potentially dangerous conditions we sent the following email:

JUST LOOKING MPC SFC AND 500MB OUT TO DEC 10 FOR ATL-SUGGEST U DOWNLOAD VARIOUS FAXES FOR W. ATL AND ENTIRE ATL STUDY CAREFULLY. MY AMATEUR TAKE – BLOCKING HIGH 1034 OFF SPAIN. VERY INTENSE LOW OFF NEWFOUNDLAND COMPRESSING AGAINST HIGH W OF UK – FCAST SAYS RAPIDY INTENSIFYING HURRICANE FORCE. THESE TWO FEATURES WILL TEND TO HOLD IN PLACE AND A HIGH ON AND N OF YOUR TRACK CREATES ANOTHER COMPRESSION ZONE AND DEVELOPING STORM COMPRESSION BOTTOM OF PREVIOUSLY MENTIONED BIG DEPRESSION FCST N OF YOUR TRACK. WHILE THIS IS CHURNING A 500MB UPPER LEVEL TROUGH IS FCAST TO DIG INTO THE AREA UNDER THE SECOND SMALLER HIGH JUST MENTIONED. THIS LOOKS LIKE IT COULD CUT OFF AND JUST SIT THERE FOR A WHILE, MAKING LIFE UNPLEASANT. YOU HAVE SEAS FROM THE DEVELOPING STORM, THE INTENSE LOW N, AND THE GALE. VERY HARD TO FCAST THIS.

THIS IS ABOUT THE WORST SCENARIO I CAN THNK OF. NOT SAYING ITS GOING DOWN BUT NOAA CERTAINLY SAYING WATCH YOUR ASS.

Parsons’ reaction was to aim a bit lower on the track, towards the east of Dominican Republic, and stay out of the risk area.

“As a result of the problematic weather system a week out, I increased speed to get money in the bank distance-wise. I run these boats according to commercial shipping standards, i.e. intending to arrive with 20% fuel reserve but I used half of that racing to FL…all good. I was pleasantly surprised how she surfed beautifully and ran on fast when close to light ship condition.

As always, I planned auxiliary ports in advance, these being BVI or Dominican Republic for the cross-Atlantic leg.”

Throughout Parsons’ decision-making process was the knowledge that he could maintain 9.5-10 knots to the Dominican Republic, even under adverse conditions.
Steve Parsons again:

“…The complex weather system that was forecast a week before my Florida ETA was a long-range GRIB file (7 days)… too far ahead to act on really. Anything beyond 72 hours is educated guesswork. So I stood on and considered my options as I continued West. If the forecast low was still going to be an issue in my route, then I could duck into Dominican Republic or Turks and Caicos (shortest deviations from route towards FL). Once I got within 72 hours of Florida the low was more predictable and less unstable, so I decided to run with your idea of taking one of the Turks and Caicos entry passes and running South of (and in the lee of) the Bahamas and into the Gulf Stream once I was clear of the influence of the low. However as I got closer the forecast became more favorable, so I altered my passage plan to head direct for the North Providence Channel under Grand Bahama Island, considerably shortening my route. The following day the forecast looked even better for me as the low rolled over North of us and I was able to make a rhumbline directly to St. Augustine. “

The conditions over the last few days…mainly downwind surfing at ten knots. You might say they were lucky. We think Steve Parsons and crew used a combination of seagoing savvy and the capability of the FPB 64-6 to make a remarkably “easy” passage across 4,504 nautical miles of ocean, averaging 9.4 knots while burning 19.8L/hour fuel average.
A final note: FPB 64- 6’s most recent GPS log shows 45,176 nautical miles since she was launched in 2012.
Posted by Steve Dashew  (January 2, 2019)

This entry was posted on Wednesday, January 2nd, 2019 at 8:19 pm and is filed under Dashew Logs, FPB 64, FPB 64 Passages, FPB 64 Updates, The Logs. Both comments and pings are currently closed.


3 Responses to “FPB 64-6: How To Make A Winter Crossing of the Atlantic In A Difficult Year”