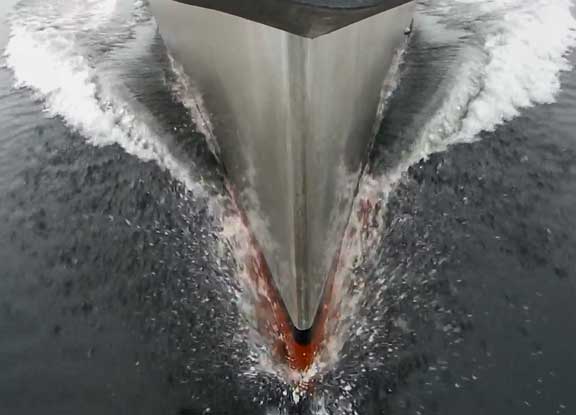 While our usual fair is more extreme weather than this video depicts, there are some lessons for us here as well, not the least of which is the efficiency at work you are about to watch on your computer screen. The video was shot by Brian Rickard on a recent cruise with the Henrys aboard the FPB 64 Sarah Sarah, in British Columbia.

Sarah Sarah has a full payload of the Henry’s gear aboard and half tanks. She weighs around 80,000 pounds / 36,000kg, and is running at nine knots through the water (net of current). This is a speed length ratio of 1.15, on the low side of where the FPB 64s normally operate in smooth water.

There are a series of views, almost all from off the boat, taken in smooth water so we can study the wave patterns. Brian, who also edited this video, has used slow motion and cropping to enable the viewer to get a feel for the magnitude of the disturbance as Sarah Sarah goes about her business.

There are three immediate, and familiar items that we noticed. The bow wave is almost non existent, there is a very slight hollow in the area of the stabilizer fins, and the stern wave is well suppressed for a yacht of this displacement.

Lest  you think we make too much of the importance of efficiency, we point out the following:

This entry was posted on Sunday, October 30th, 2011 at 12:00 am and is filed under Dashew Logs, FPB 64 Videos, Right Sidebar Latest Videos. Both comments and pings are currently closed.