FPB 64 Vs Reef – Are The Factors Of Safety Sufficient?

The various rules to which yachts are built are based on seagoing loads. If you design to ABS or Lloyd’s, odds are you will be OK  offshore, but there is little extra margin for the mistakes which are a part  of cruising. With an ABS keel structure, if you go aground, it is almost certain a trip to the boat yard is in your immediate future. But if you engineer to four times ABS, you are probably going to continue with your cruising.

We have tested these these theories ourselves, and had our owners repeatedly test them on our sailing designs. (Click here for a detailed post on our Black Swan theory of cruising.)Now we have some real world verification of the FPB 64’s factors of safety.

The photos which follow were taken of one of the FPB 64s after it tangled with a reef in the Fiji Islands. She has been hauled to replace a damaged stabilizer fin. At the end of this post is a link to the details of the event which has some excellent lessons for us all.

Pete Rossin, Iron Lady’s skipper, told us “We dragged along the reef for close to 2 hours although more intermittently as time went on. The first hour was horrible. Tide was coming in – we hit the reef about an hour or so after low. My analysis is that we JUST clipped the outer reef edge with the bow on the stbd side as we were trying to exit to deeper water – another few meters off to to port and we would have been fine.  The wind then blew us around on to the outer side of the reef and pinned us but also blew us along the reef.  There were deeper stretches in between the heads and that is why we drifted and bumped slowly along the reef until we made deeper water…”

There is superficial paint damage forward which coincides with a water depth of about 3.5′ (1.05m). The damage is mainly in this area and  all the way aft, indicating coral head tops with deeper water between. 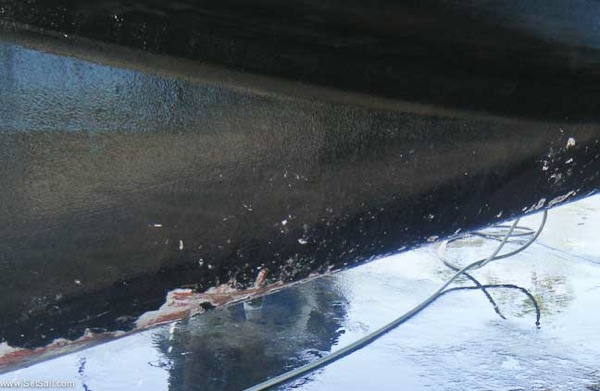 This is the leading edge of the prop skeg, here about the same depth as the forward abraided paint area. 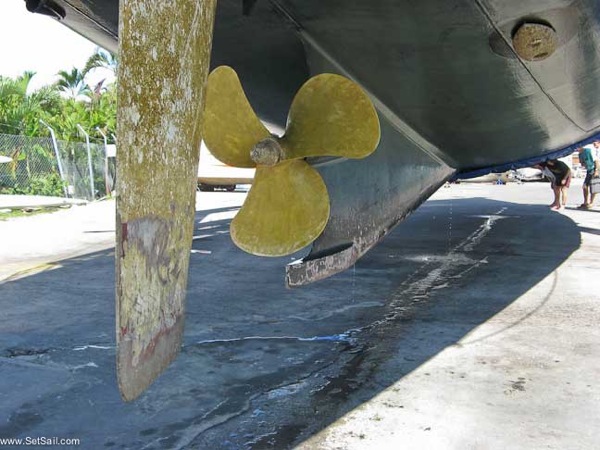 The abrasion on rudder tip and skeg bottom show the same water depth as is found forward. 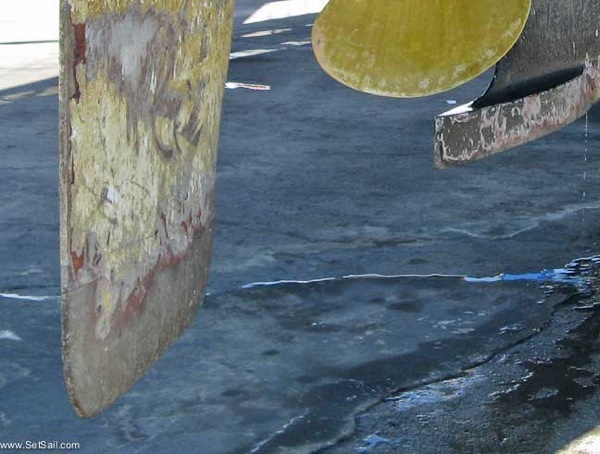 The rudder probably cut into the coral on impact. We have used a factor of twice ABS on our rudders for many years. This is an indicator twice ABS is on target. 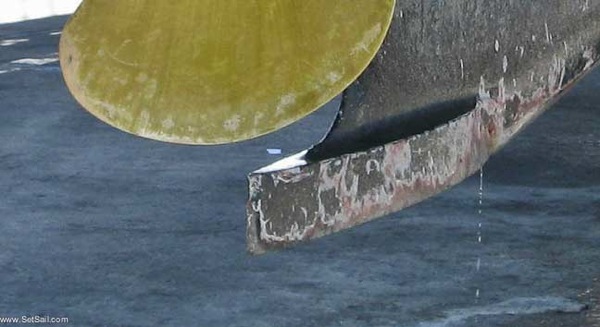 The fact that the prop coating is mainly intact tells us the skeg is doing its job.

Several factors helped to mitigate the damage incurred and the time spent on the reef:

(For more information on cruising in coral, and getting out of situations like this, see  Practical Seamanship.)

If you are going to spend extended periods cruising, incidents like this will occur. Not often mind you, but like handling severe weather, it is better to be prepared for the worst, rather than just hoping for the best. Although we cannot foresee all eventualities, nor protect ourselves from everything, we like knowing that we have a design under us which will mitigate the results of operator error, the capriciousness of Mother Nature, or just plain bad luck.

This entry was posted on Saturday, March 5th, 2011 at 11:55 pm and is filed under Right Sidebar Most Pop Posts. Both comments and pings are currently closed.