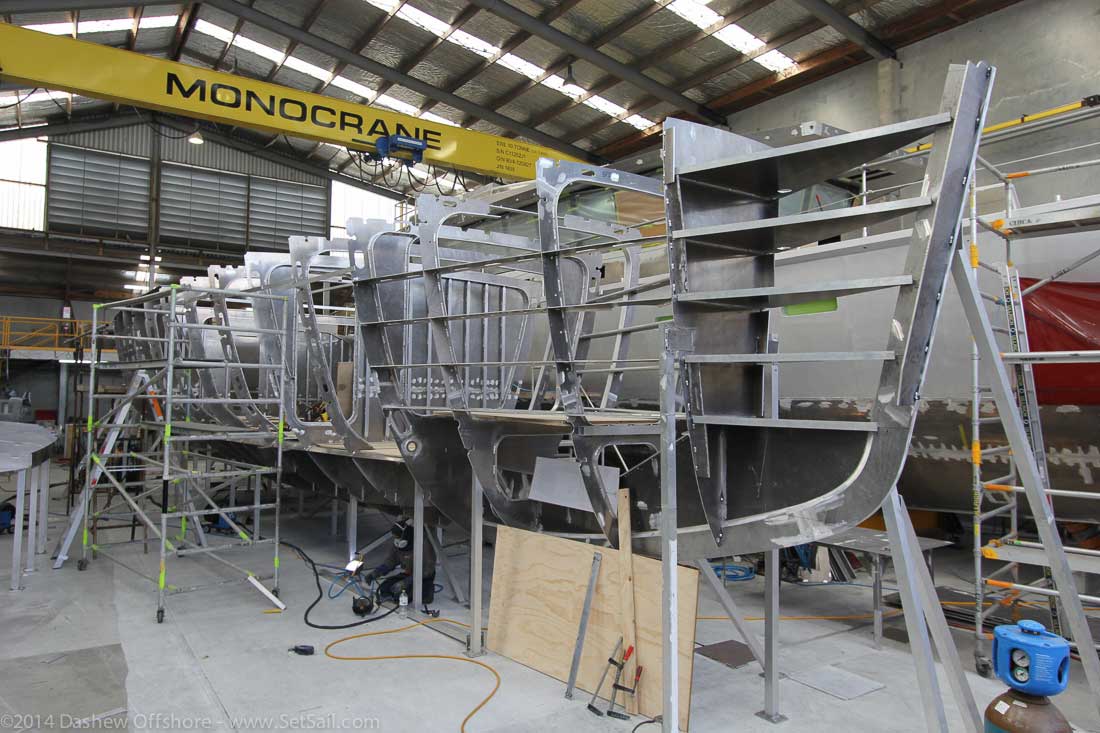 After all those thousands of design and engineering hours, innumerable three dimensional images, and years of noodling on this ltest FPB series design, you would think we’d be tired of it. But these photos represent the high point in terms of buzz factor, and it won’t be equaled again until we see this latest FPB sitting on her lines, afloat in the waters of  New Zealand. This is also the point during the construction cycle where we can get a sense of size and shape (that will soon be obscured by the construction process).

You will note that the area to the right in the photo above is missing something. FPB 64-10 has been moved into the construction bay in the next building, recently vacated by FPB 64-9, which has just completed sea trials. That FPB 64-10 space is now in use for FPB 78-1 roof sub assembly. It won’t be long before hull modules for FPB 78-2 will start coming together in this area. 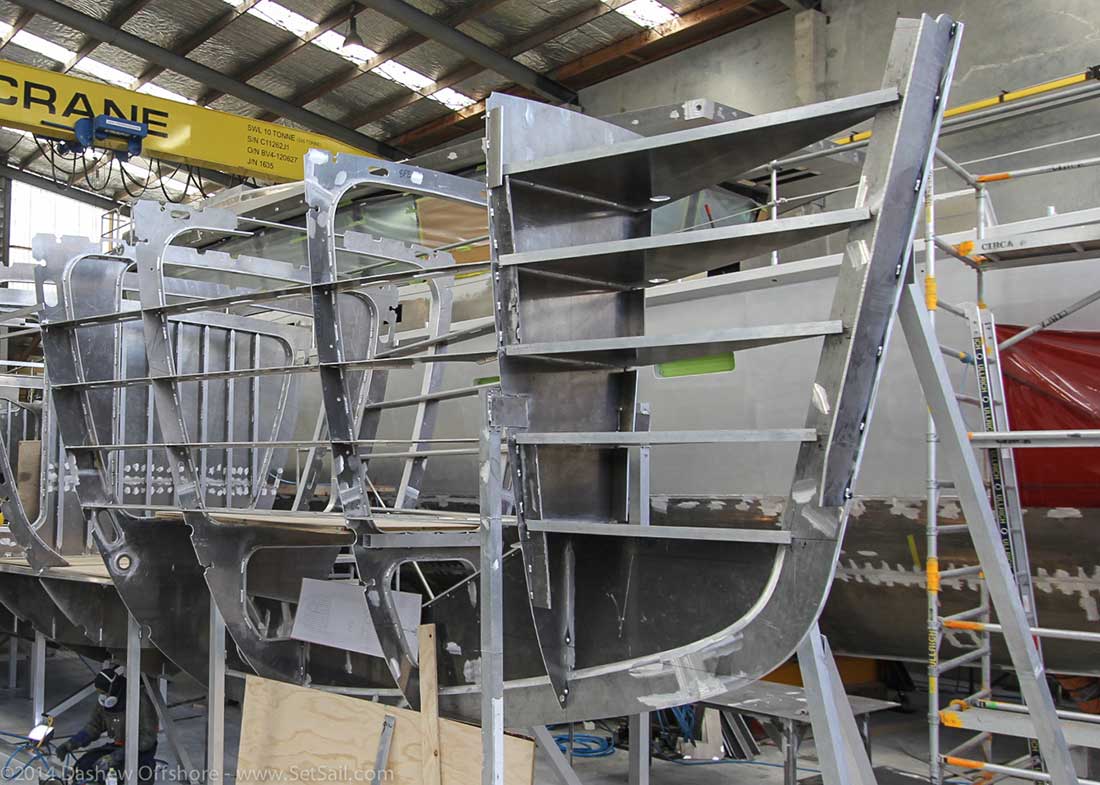 We like our bows strong, the better to push through things like ice and debris. There is also a collision bulkhead a short distance aft of the stem. The horizontal stiffeners on the stem bar are called breast hooks.The stem bar is 40mm thick, and when the bottom plating is added to this it will have a total of 64mm of aluminum, or 2.5”. 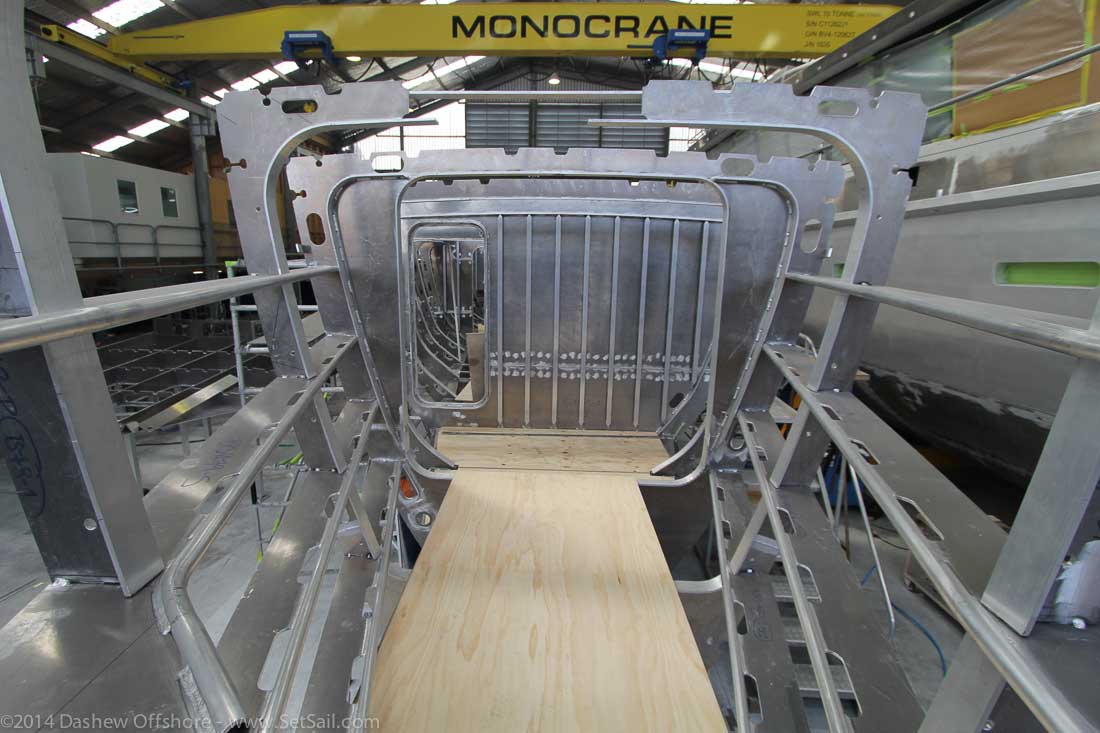 We are looking here from the inside the forepeak collision bulkhead aft. Those massive topside stiffeners give us a bit of comfort when we are trying to find our way through a ice. The slots are to facilitate tying gear in this area. 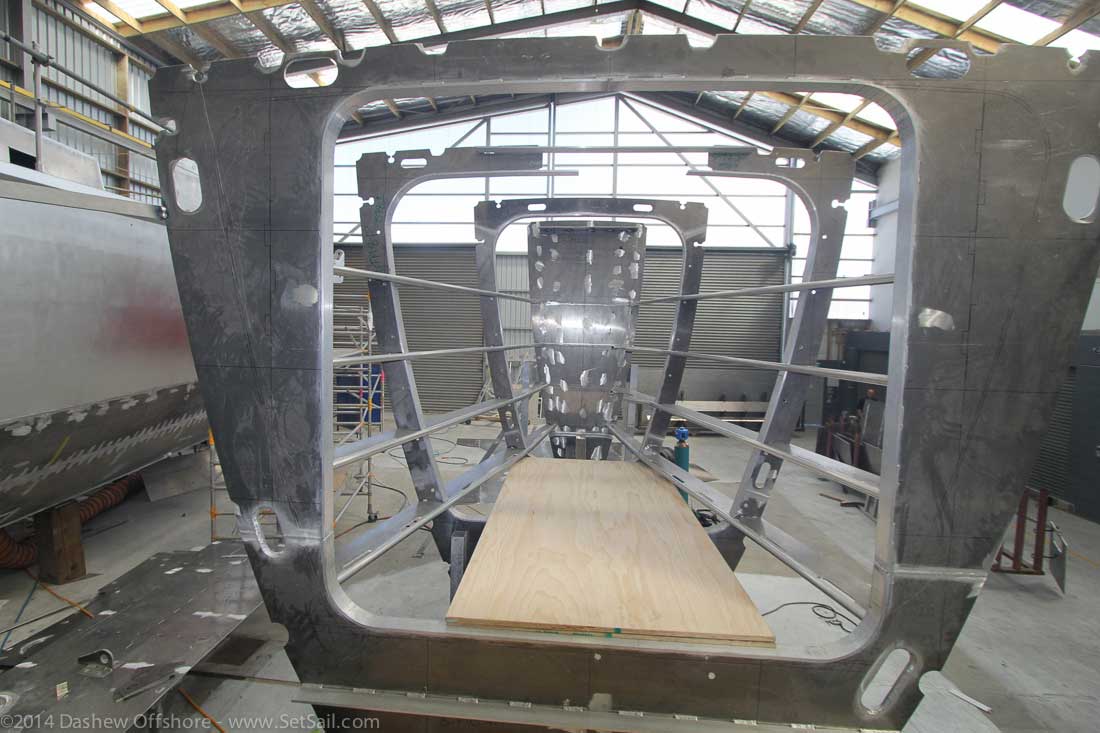 This view is from what we refer to as the “annex” adjacent to the owner’s suite. We are looking forward now. 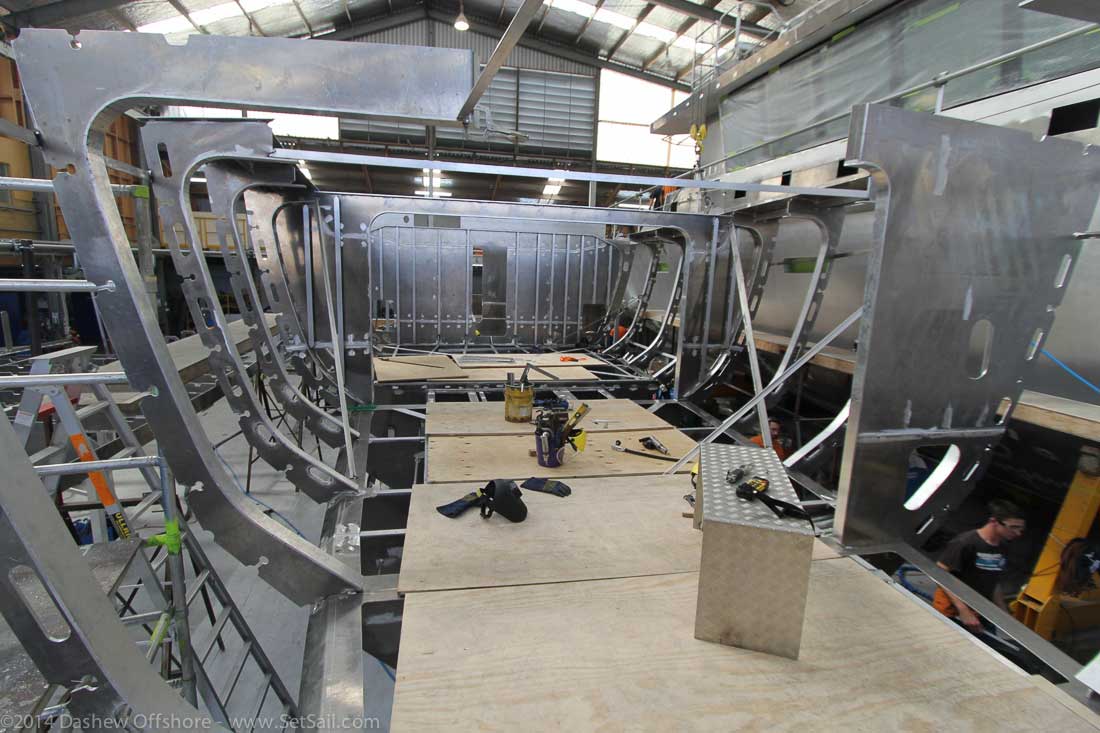 Turning around and looking aft from the forward end of the owner’s suite, that is the engine room bulkhead all the way aft. 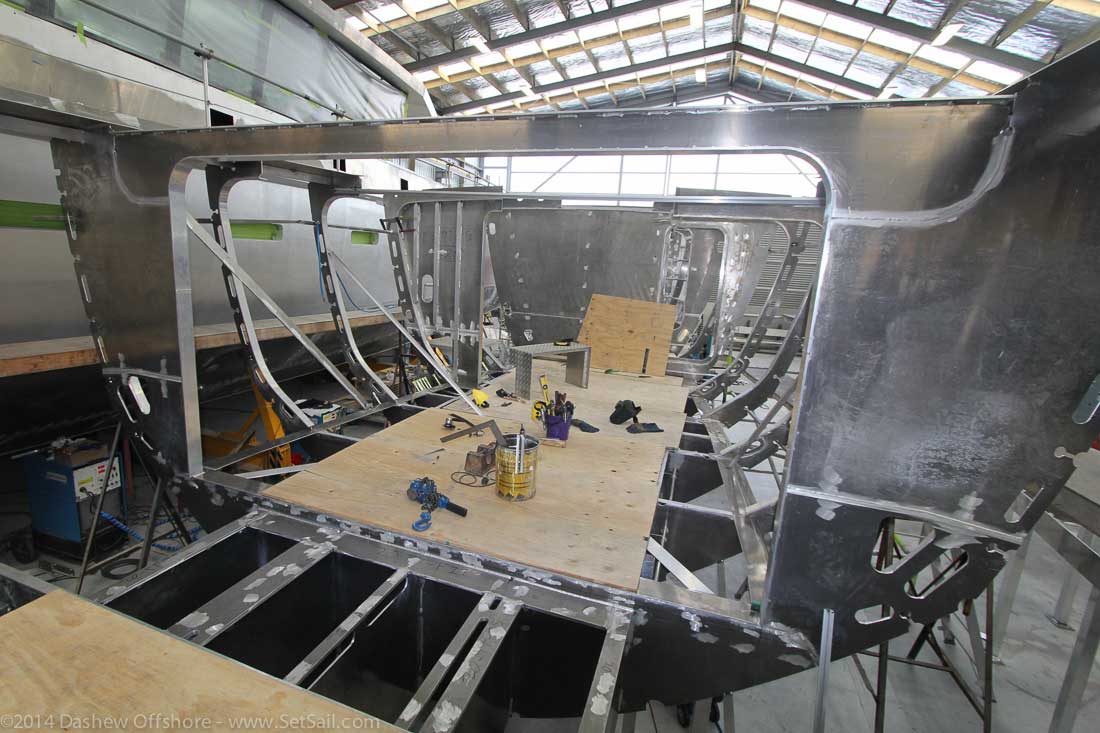 We are standing in what will become the door into the aft starboard stateroom. The hallway separating the after staterooms from the forward owner’s suite is 1.2m/4ft in width. 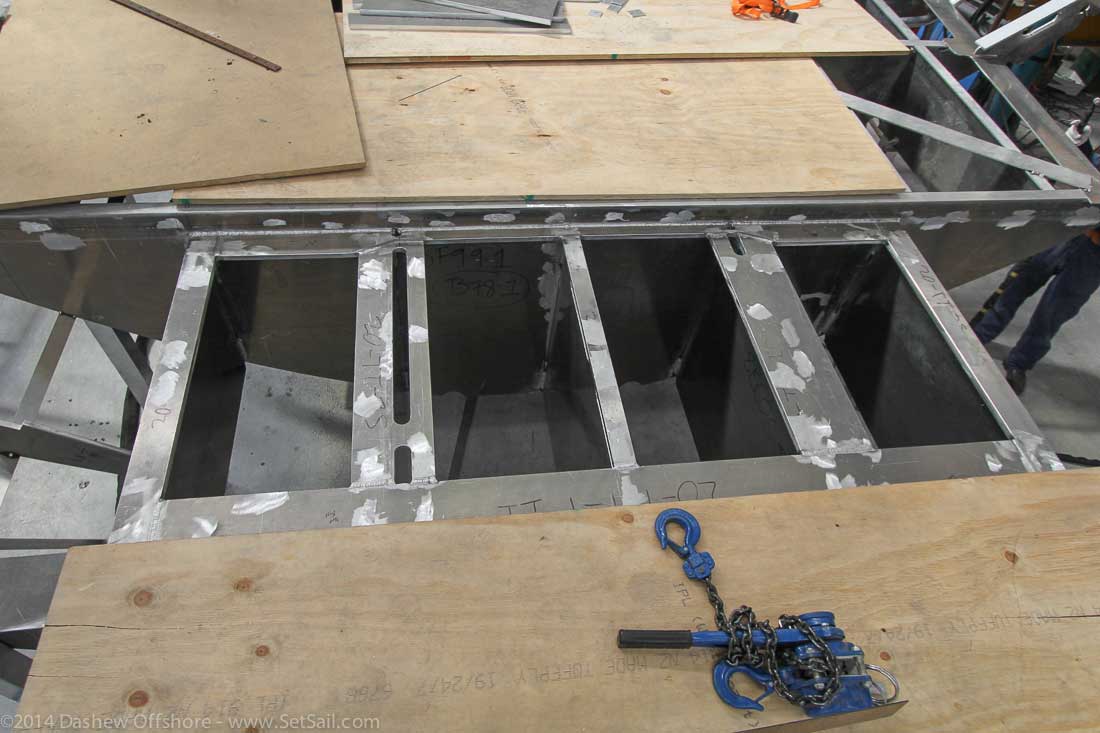 These two openings in the center of the fuel tank will become a sealed coffer dam for the traction battery bank. 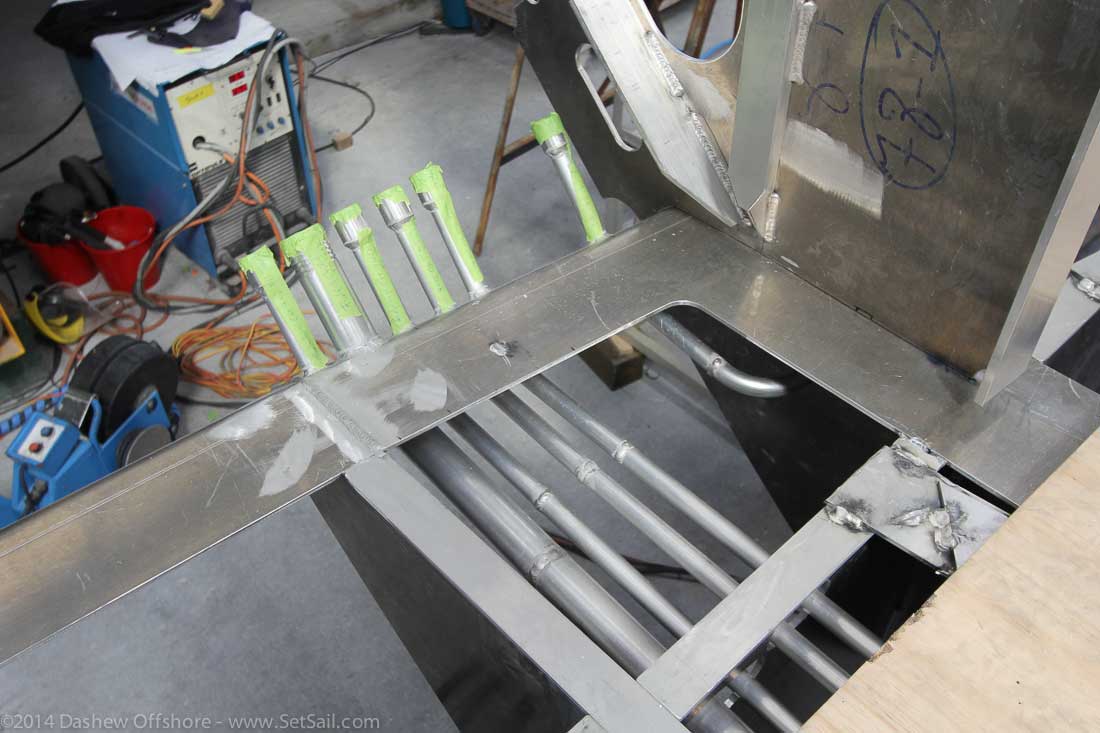 The pipework is for the fuel  tank pickups, returns, and fills. 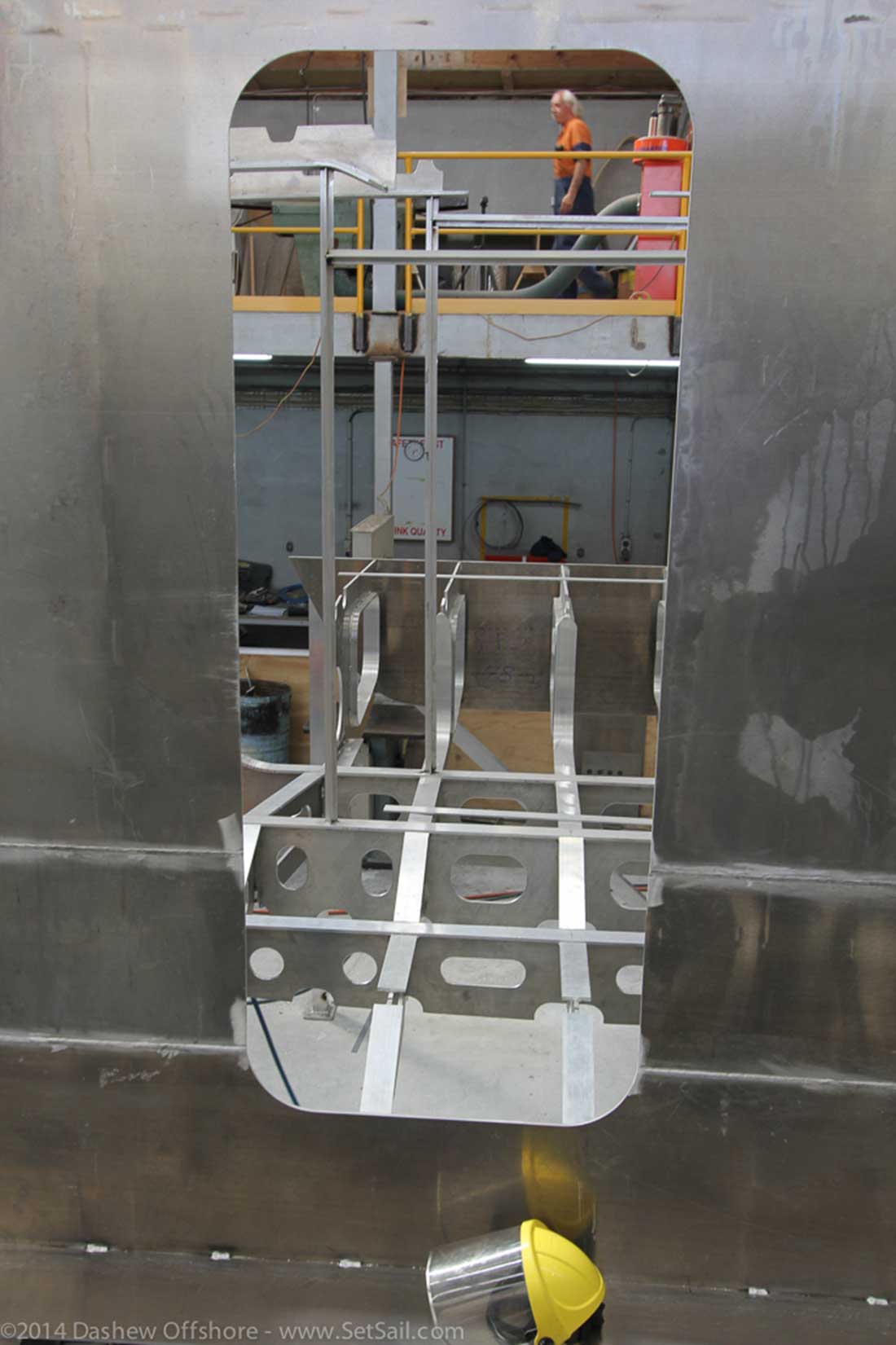 This will become the watertight door from the starboard head into the engine room (there is another door from the aft end of the boat as well). 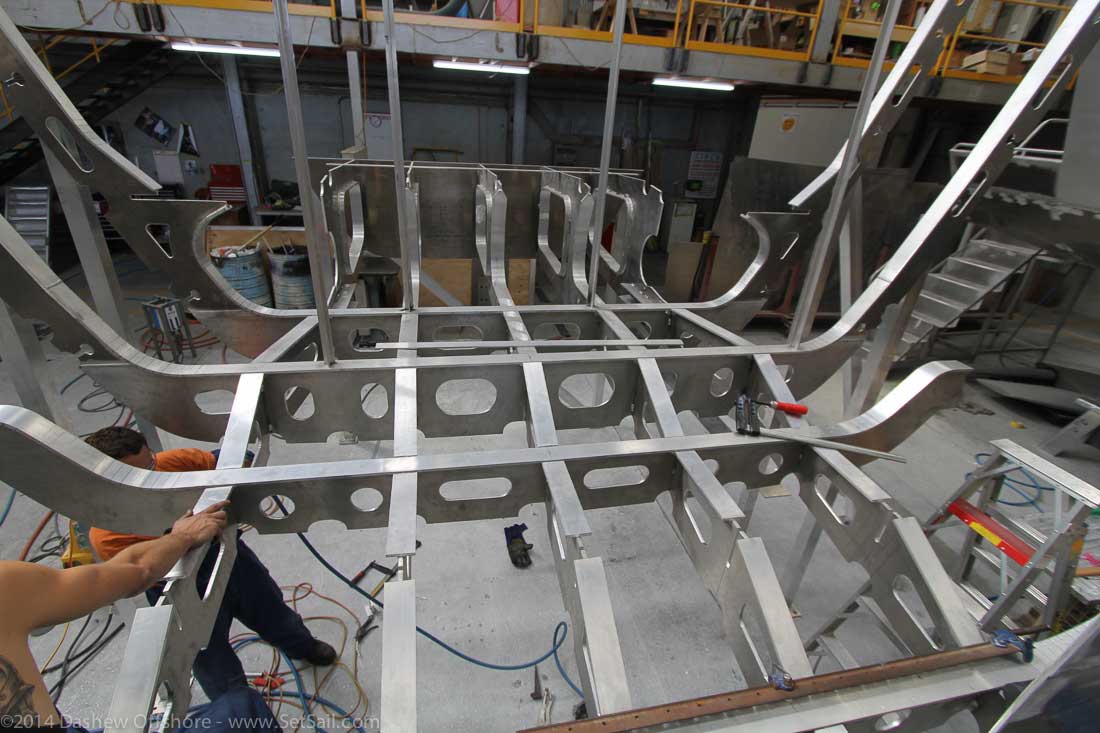 Engine bearers will be worked into the longitudinal girders and there is another watertight bulkhead aft of the engine room not yet installed. 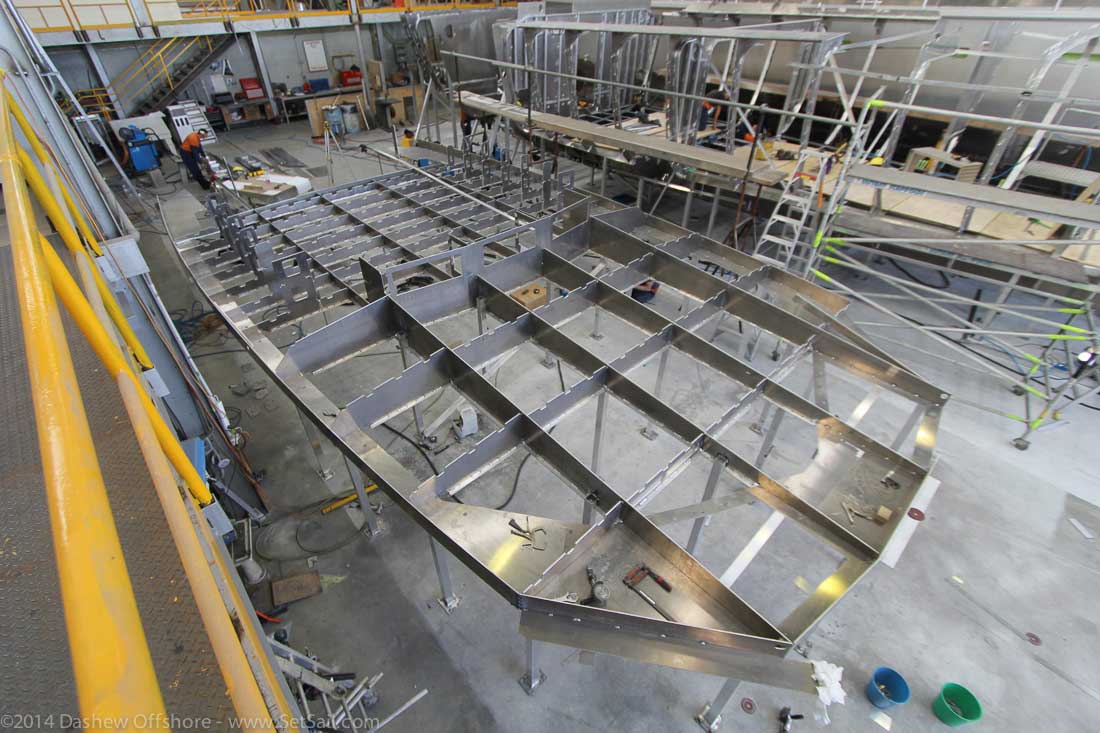 Moving to the next bay over, the great room roof is taking shape. 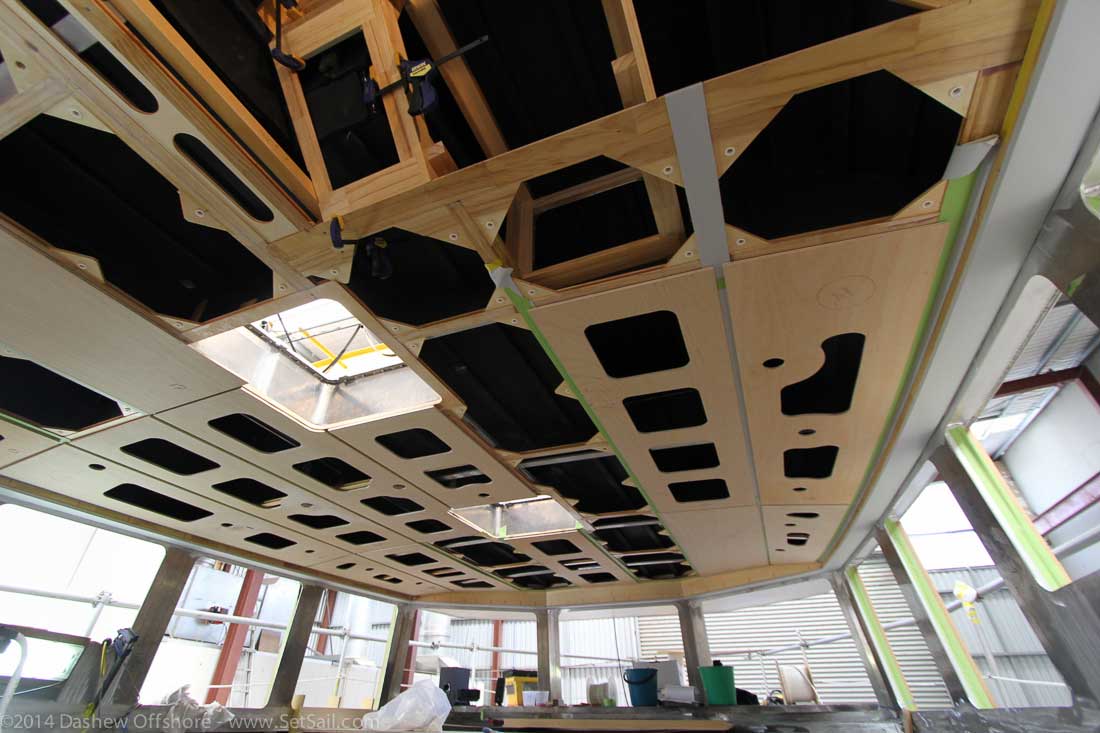 Shifting projects now, the FPB 64-10 is coming along nicely. This photo is looking up at the headliner panels. Note the cutouts to save a bit of weight. 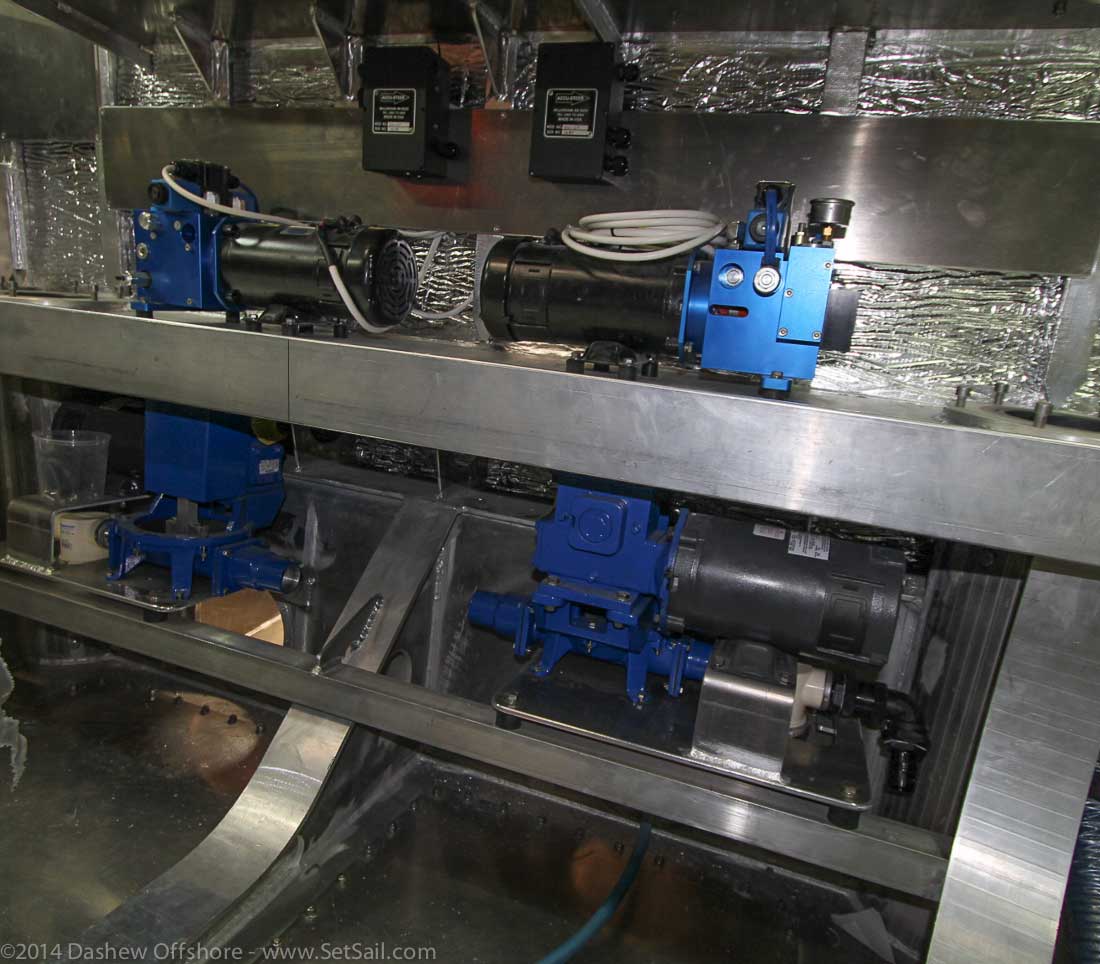 We’ll close with this shot of the engine room on FPB 97-1. The two pumps on the upper shelf are for the autopilot / power steering. These are two totally independent systems, each with its own hydraulic cylinder, pump set, and auto pilot electronics.

The lower shelf are the dual engine room bilge pumps. Each of these has its own float switch and breaker. Of course there is a hydraulically driven damage control pump as well.

This entry was posted on Thursday, April 3rd, 2014 at 12:38 am and is filed under Dashew Logs, FPB 78, three. Both comments and pings are currently closed.