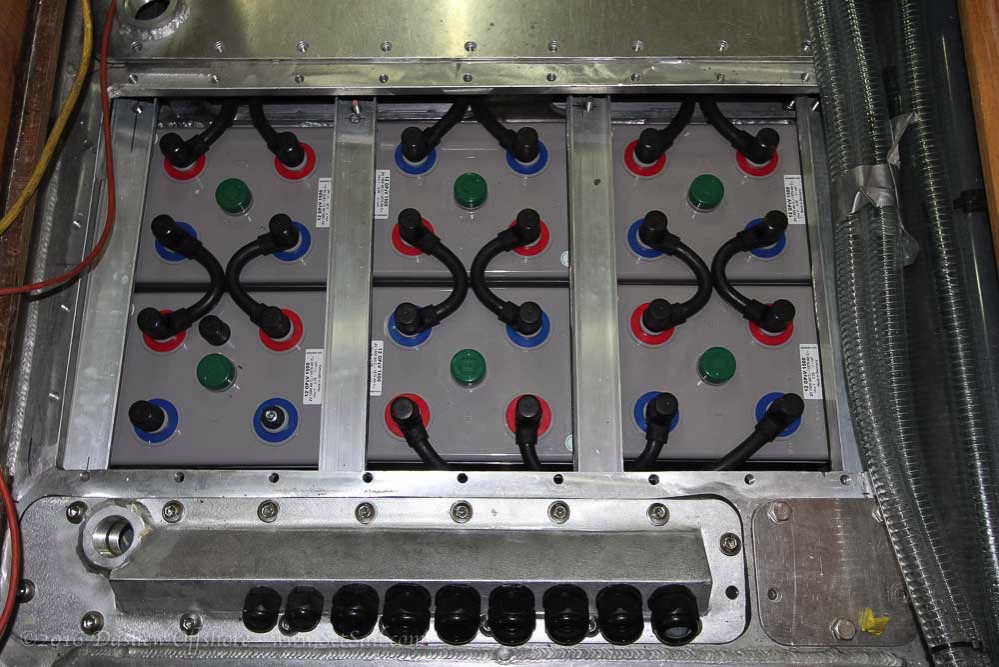 It is a law in the yacht building universe that the sparkies (electricians) are always the last ones off the boat. And with the DC system now almost complete, we can see the light at the end of the long building cycle tunnel. We thought this might be a good time to go through the DC battery bank and related circuits.

We’re looking here at half of the house battery bank. These are Hoppeke12 OPzV1500 batteries, rated at 1570 amp hours based on a C/10 discharge rate, to 21.6 volts. Capacity is a function of temperature (warmer is better in terms of capacity), and how quickly the batteries are being discharged. C/10 rating would mean a discharge rate of 150 amps. We might get this high a small percentage of the time when cooking, but a high average would be more like 40 amps so C/25. This adds 10-to-15% to available capacity.

These are generically called “traction” batteries, and have an expected cycle life of 1200 80% discharge cycles. 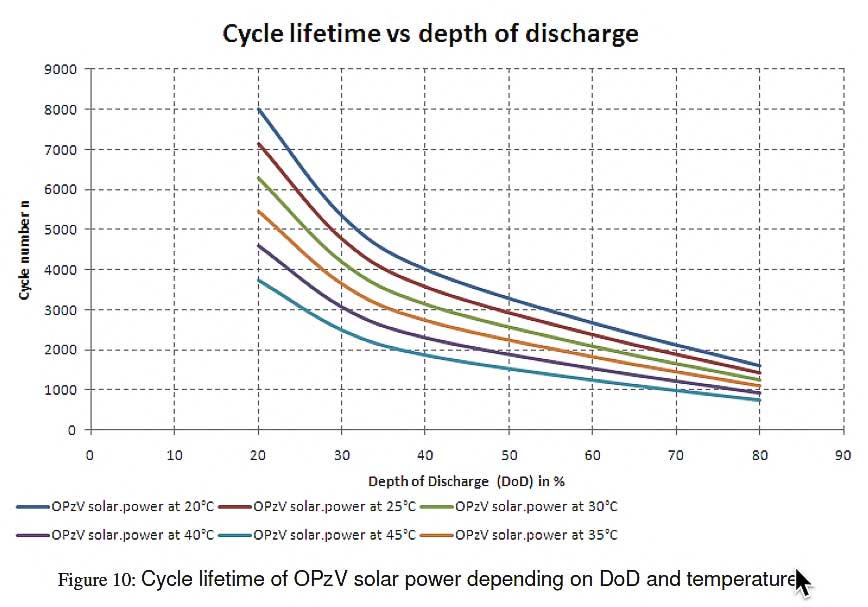 Back off from 80% depth of discharge to 65% and cycle life jumps considerably. By habit we all look to minimize DoD so as to maximize life. But does this make sense? Given the solar array, and periodically moving the boat where the engine driven alternators recharge the batteries, it is doubtful whether you would average a full 80% cycle on a weekly basis. But if you did, cruising full time, the batteries should last 20+ years if properly charged and maintained when in storage. 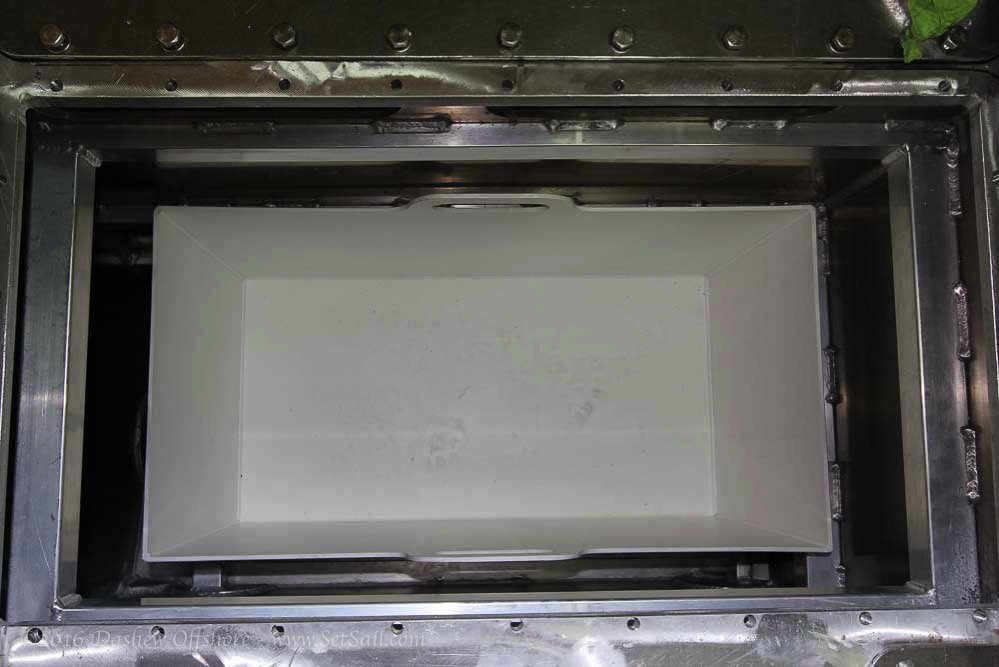 These 12 cells represent roughly 2400 pounds, 1.1 tons, and live within a sealed (and vented) coffer dam within the central tank of the FPB 78. There is a containment vessel that houses each half bank, and substantial space around the batteries for air circulation. 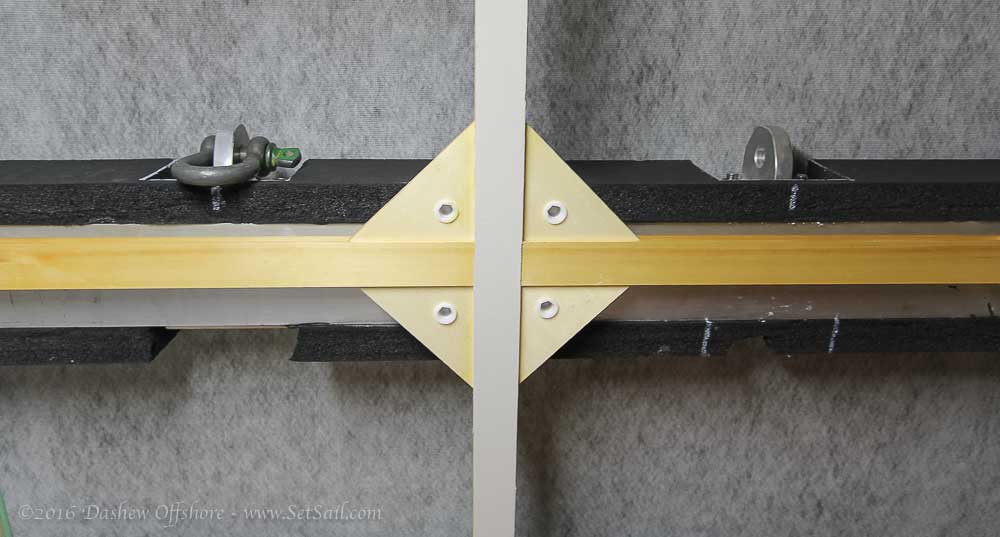 Aluminum construction makes placement of overhead lifting eyes easy, for installation of the cells and later removal and replacement. 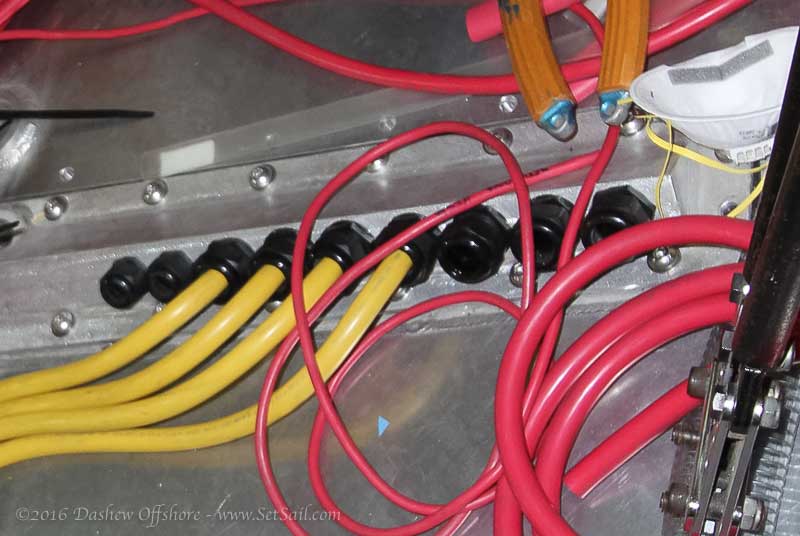 In the photo above you can see the wiring exiting through watertight glands.

A large battery bank requires a substantial charging source. The FPB 78 has three means of recharging. 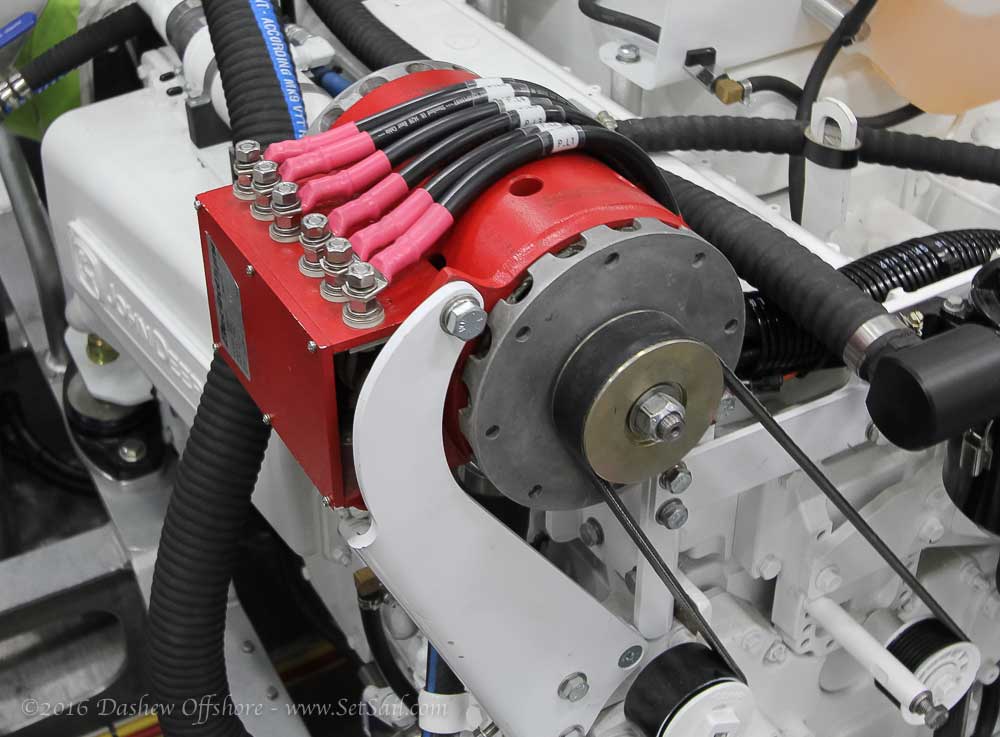 Each engine has a 250 amp/28 volt (hot rating) alternator, with dual sets of windings, in other words effectively two alternators on a single shaft. 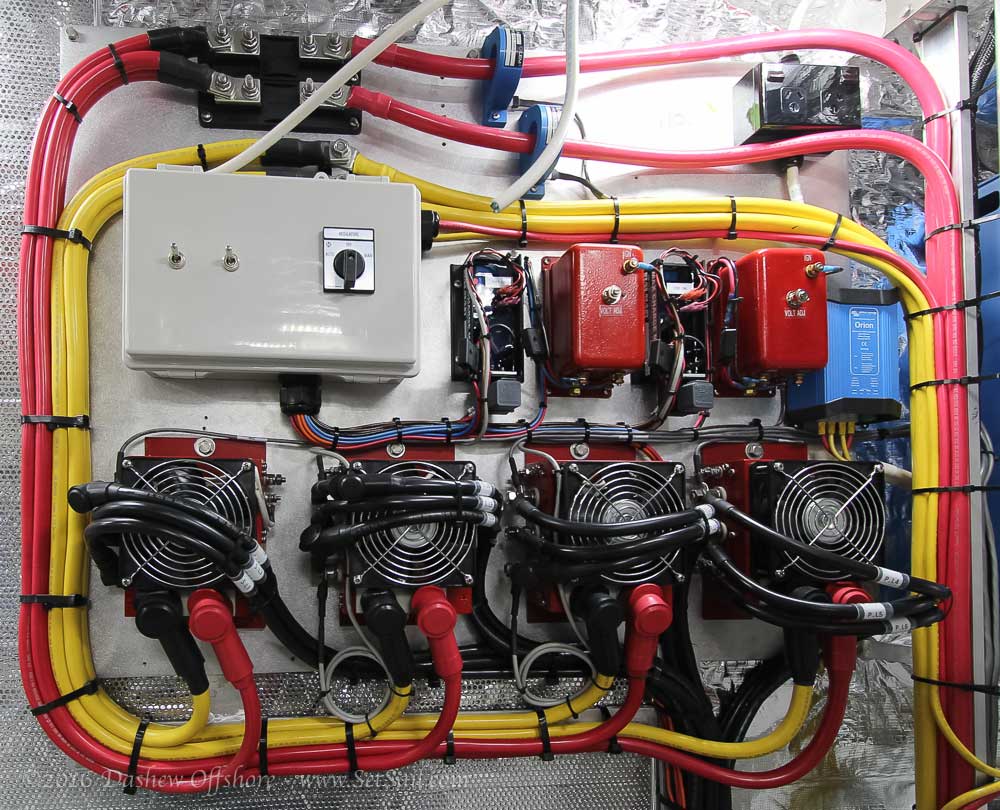 The AC current produced by the alternators is rectified into DC by remotely mounted rectifier assemblies, shown above. Each pair of these services one alternator (a rectifier for each set of windings). The alternators are controlled with multi-stage regulators, one for each pair of windings. There is a backup system, created by Deon Ogden, that keeps watch on charging voltage. If it gets out of range, a relay breaks the multi-stage regulator circuit and turns on an old fashioned PWM single voltage regulator.

There are also manual switches with which to select the control circuit. 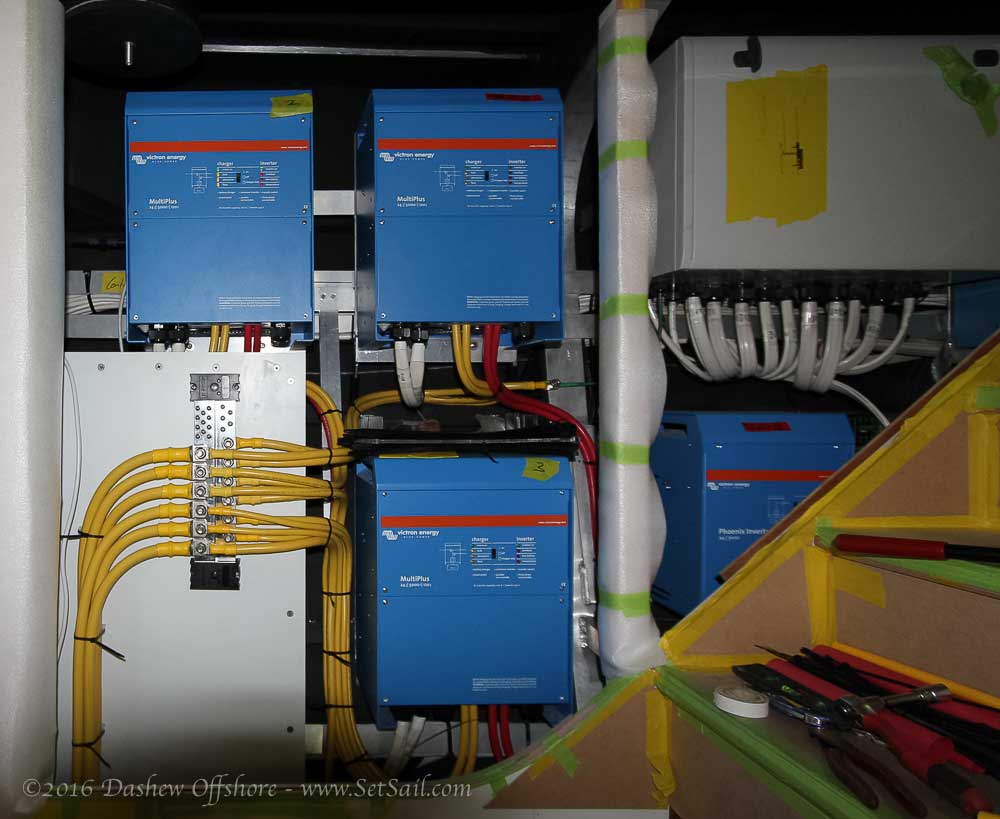 Three inverter/chargers can charge the house bank when on shore power, or with the genset running. These produce a theoretical 5000 watts of AC power (each) and 120 amps/26 volts DC charging. 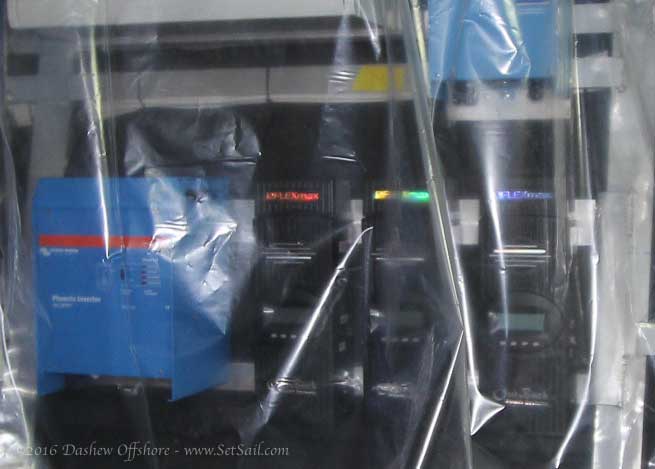 Ten 340 watt solar panels are run through with three charge controllers. Two of these can do the job but a third is wired in, and if one fails the load of the other two can be consolidated. 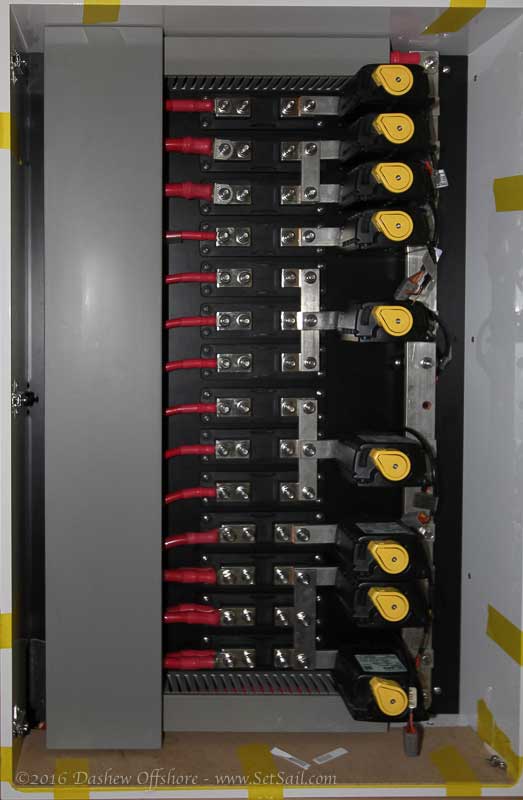 All of this power requires substantial switching and fusing. The major circuit protection/switching is shown above. These are remotely controllable switches, with manual backup, of course. The fuses are not yet in place. 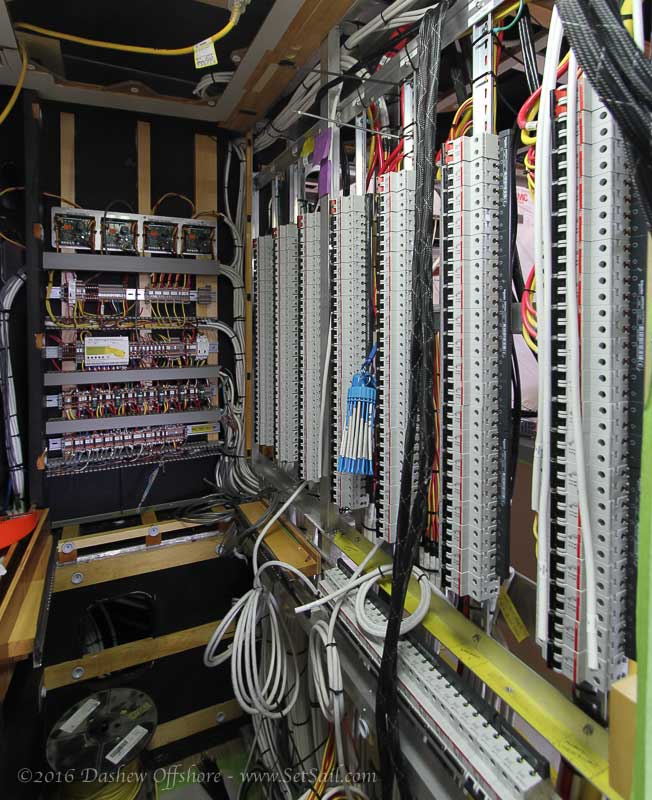 The lighter DC circuits are controlled from the main panel and from a small sub panel in the engine room. Note the generous space between the DIN rail breakers, which makes R and R of the breakers a relatively simple process. The breakers themselves are substantially more expensive, but over the life of the yacht this will be paid back many times.

There’s lots more, but it is a beautiful sunny day, and we’ve got a stack of office work left to do, so we’ll leave the rest till later.

This entry was posted on Monday, March 7th, 2016 at 12:06 pm and is filed under Dashew Logs, FPB 78, General Systems, The Logs, three. Both comments and pings are currently closed.