If we had to pick one system above all else that must be 100% reliable we’d say steering. Which is why we fit two complete auto pilots, two independent hydraulic systems, and use intensely muscular structural elements. Most of this is easy, but establishing the engineering scenario for the rudder itself takes a bit of work. As we are just wrapping this up for the FPB 78, we thought you might find the logic of interest.

There are a variety of factors that lead to and impact rudder load. These include:

With our type of hull shape and displacement, there is little resistance to turning, and the boats tend to pivot on the bow. When significant load is applied to the stern, say by the rudder developing turning force, the stern slips sideways, pivoting as it were on the bow. In all cases, save for one, this minimizes the force the rudder can actually generate in the rudder shaft.

That exception is when a breaking crest slaps the stern from near abeam, and the rudder attempts to correct course while fighting the wave at the same time. This would be our idea of a high load scenario.

As you will see in a moment, the various rules handle angle of attack differently. In the real world the AOA is self-limiting. Past a certain AOA the rudder flow breaks down, and lift is mostly lost. This often happens at a lower AOA than the various rules contemplate

Speed, in our case, is an interesting calculation. Do we use normal cruise, maximum smooth water speed, or surfing? In the latter case do you take credit for the circular molecule motion (theoretical) which is said to reduce rudder efficiency when surfing?

As you will see below, our rudder shafts are very conservatively engineered for the seagoing loads, and have huge factors of safety. What we are more concerned with is engineering for mistakes in navigation, i.e. hitting the bricks. The key here is trying to engineer the bottom portion of the rudder so that it is weaker than the shaft, and bends or breaks off before the rudder shaft reaches its elastic limit (deforms). This not easily engineered, and at best all you can do is hope you have it right. But as we have yet to bend a rudder shaft, we think we may be headed in the right direction.

The name of this game is damage tolerance, having a degree of probability of running aground and then getting off and continuing to cruise without visiting a boat yard. Odds are one of the stabilizer fins might have departed, but we can live with that. The steering system must remain functional. This brings us to the type of rudder support, and if the bottom edge is exposed or there is a protective beam between skeg and rudder bottom.

Protective beams are quite common. However, if you are bouncing the weight of the aft end of the boat in the middle of that beam, odds are it will bend upwards. Then it jams the rudder or prop, or both. Pick your poison. A skeg hung rudder requires a bottom rudder bearing. If the skeg is damaged, and the bottom bearing jammed or chewed off, there is no longer sufficient support for steering the boat. All of which adds up to one of the reasons we use spade rudders. Properly engineered, they provide the highest factors of safety in the event of a grounding. And by far the best steering control.

Now some numbers. The table below has data for the Lloyds Special Service Calculations and American Bureau of Shipping Racing Yachts and Motor Yachts. These include input data for the size and shape of the rudder, and the speed, along with angle of attack. The column headed “Lower Stock Rule” has the required diameter of a solid aluminum rudder stock. The far right column, “Twice Rule Nominal” is the required solid aluminum stock diameter for two times the required rule stiffness. Dimensions are given in millimeters (divide by 25.4 to convert to inches). 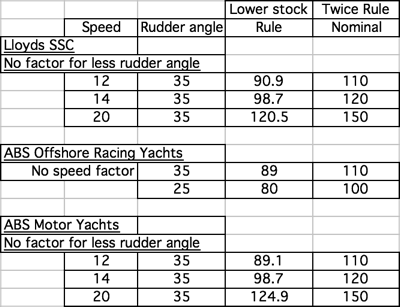 There are three sets of speeds shown: 12 knots, which we consider to be the normal maximum cruising speed, 14 knots, which will be often seen surfing, and 20 knots, representing the peak surfing speed we are likely to see on occasion (although more is possible). Starting at the top, at fourteen knots, twice the rule induced stiffness comes out to 120mm (just under five inches) of rudder stock which also happens to represent the Lloyds SSC diameter at 20 knots on the basis of 100% of the rule requirement.

ABS for racing yachts has no speed input, but does allow changing the angle of attack for the rudder. Here we see 110mm (4.4″) solid stock working out at 35 degrees of deflection. ABS for motor yachts allows us to vary speed, but imputes a 35 degree AOA. Here 20 knots and a 35 degree AOA on the rudder equates to 5″/125mm solid shaft. Same AOA and fourteen knots, gives us twice the ABS rule stiffness .

All of the above confirms what we knew starting out, namely that a 125mm/5″ solid shaft would do the trick. We just wanted to run a few numbers to verify all of this.

Comparing this now to our sailboat rudders, this is a heavier stock for a smaller rudder than would be the case for a sailing yacht. On the other hand, if we mess up and put the boat onto a reef, the loads are potentially higher because of the much heavier displacement. Of course the FPBs have skegs to help protect the rudder and props when aground where the sailboats had nothing. All in all, our instinct says this is a very conservative structural system

At a later date we will discuss making the tip of the rudder blades frangible, so they fail before the ruder stock permanently deflects.

This entry was posted on Tuesday, June 18th, 2013 at 4:16 am and is filed under Dashew Logs, FPB 78, three. Both comments and pings are currently closed.