It’s not easy to make the structure strong enough for a rollover, or being dropped off a wave – but it’s a cinch compared with getting the window system to stand up to these loads.

To begin with, these boats have a lot of glass. In a normal seagoing context, with boarding seas being the only structural problem, the engineering is pretty simple. One goes to ABS or Lloyds rules, runs the type of classification, vessel data, and window opening through the computer, and out comes a glass requirement, like the thickness called out below for the FPB 83.

A couple of things to note here. First, Lloyds is much more conservative than ABS. Second, all of these numbers assume storm shutters are available at some point, and in severe weather would be used. And, most important, this data is based on wave impact rather than what can happen in rollover type situations.

As you have probably guessed by now, we’re very numbers oriented. But some things simply cannot be engineered. You have to go with feel, or intuition, based on experience.

So what are we worried about? Waves are not a problem. But if the boat is rolled, or dropped in a trough of a wave, the loads become huge. As these loads would normally be taken by the side windows, these need to be super strong to make us mentally comfortable.

We agree that the Lloyds side window requirements are too thin to make us comfortable in heavy weather. We also know that to break out an 8mm thick piece of this toughened safety glass takes a huge amount of effort on the end of a 10-pound (4.5kg) sledge hammer (from real world experience on that sledge).

The answer for us is 19mm/3/4” toughened safety glass for front and sides. This is a little less than double the required stiffness for the front windows (stiffness is a function of the cube of the thickness). For the side windows, 19mm is 13 times as stiff as what the Lloyds SSC rule requires and 31 times as stiff as ABS mandates. We know this sounds ridiculous, but the weight penalty is around 400 pounds – 180 kg – and we can easily deal with that.

As nothing is for sure, we also carry a set of storm shutters, but we don’t expect to ever need them.

Although the loads on the FPB 64 are less as it is a lighter vessel, we are staying with the same 19 mm toughened safety glass windows. We just like the way it feels.

Post Script: We looked very hard at various laminated products. There are a number available that have a special plastic inner layer. Tests have shown that these have better impact resistance than toughened safety glass. Much of this material is used institutionally in prisons, banks, and armored limousines (it is also bullet proof). However, there have historically been problems with the discoloration or bubbling in the laminated glass after years of being exposed to sunlight and salt. So we decided to pass. 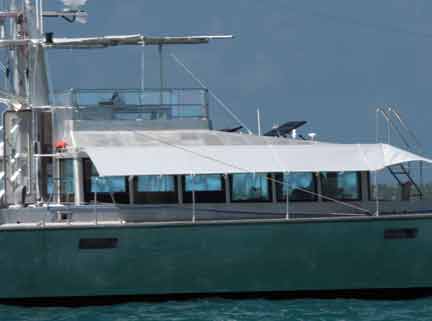 The 19mm glass we are using is not available in tinted form. So we’ve had a special 3M film applied which reduces UV A and B by 99% and cuts infra red light (which produces heat) by half. We also use external awnings or shade covers and/or interior shades.

This entry was posted on Saturday, October 15th, 2011 at 12:42 pm and is filed under Dashew Offshore, Design Objectives. Both comments and pings are currently closed.