Launching and Retrieving the Dinghy 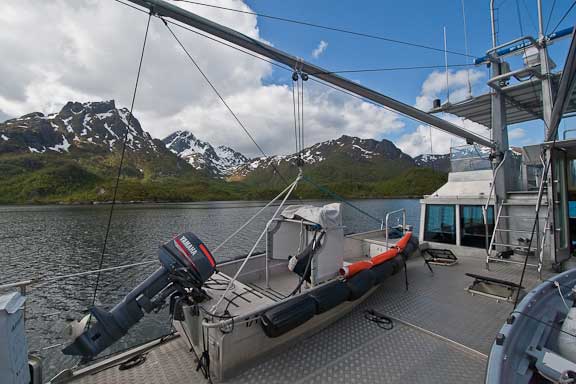 We have had several questions about our booms and how we launch and retrieve dinghies so we’ve done a photo series on the process.

We consider this to be one of the most dangerous things we do while cruising. The dink is heavy – 700 pounds/340kg – and there is an electric winch involved. So care in the use and maintenance of the system is required.

The process which follows has evolved over the years and in reality takes less time to accomplish than to read about. It is very simple in a calm anchorage, working at deck level, with high life lines at the deck edge. 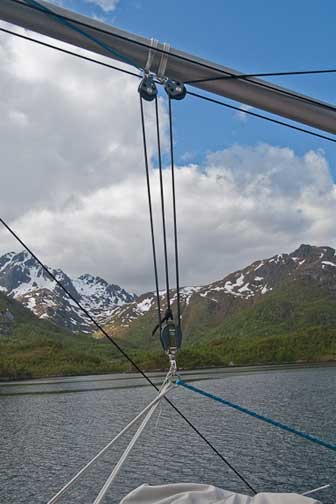 We use a three to one tackle for lifting, as described previously. This reduces the load on the winch drum and makes easing the halyard out go more smoothly. 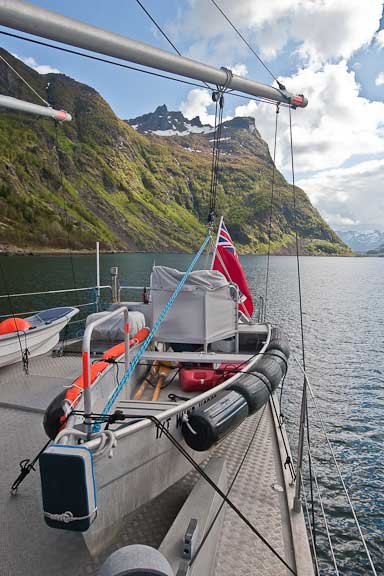 To control their position the booms have permanently rigged fore and afterguys. When we are underway, or coming into port, the booms are positioned inboard. The halyards are always attached to the dinghies when they are on deck. When at sea and running with the wind we rotate the booms outboard for increased polar moments and windage (leaving halyards attached). 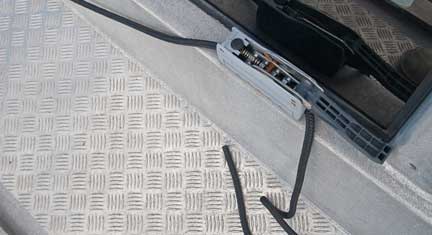 Both guys are controlled with rope clutches, sailboat style. To launch the foreguy clutch is opened and allowed to run free. These clutches are quicker to use than cleats. 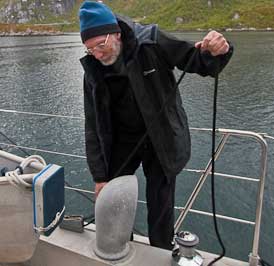 The afterguy is eased about four feet (120cm). This lets the boom angle outboard once the dink is hoisted, but prevents the boom from running out too far. 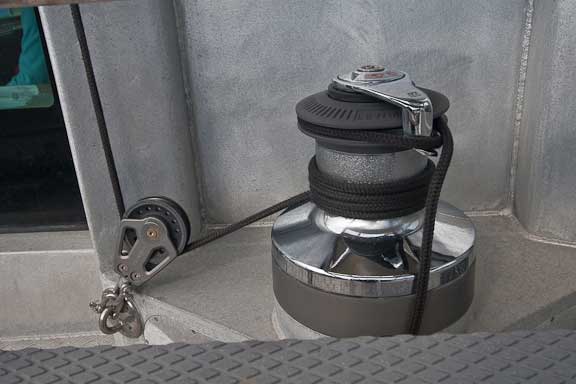 Four full wraps of halyard are used on the drum of the self tailing winch. 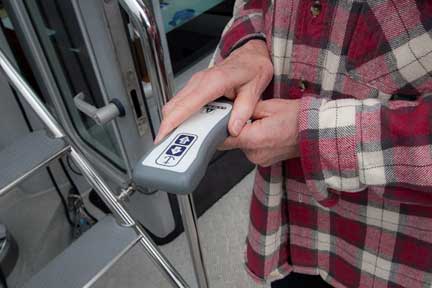 The control for the winch is on this remote, with a 16 foot (5m) cable. Before hoisting we double check that:

When the winch is in use we both keep an ear tuned to it and an eye on the dink and halyard rigging. The winch is so powerful that if something were amiss it would continue to pull until it broke whatever was causing the difficulty. In four years and hundreds of dinghy launch cycles we have yet to have a problem, but we try and remain alert to the risks. 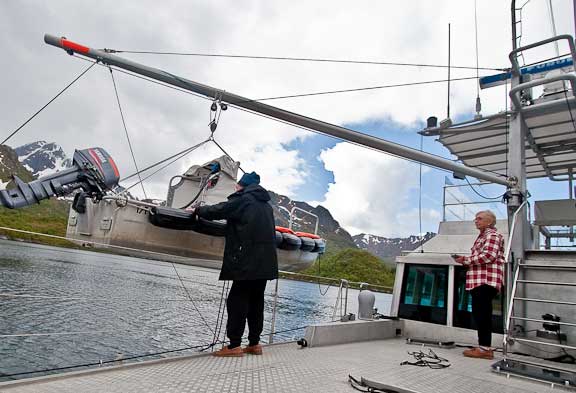 One of us runs the winch and the other guides the dink outboard once it has been hoisted over the lifelines. Note the position of the bridle and blocks. The person controlling the winch has to be mindful not to hoist too far. 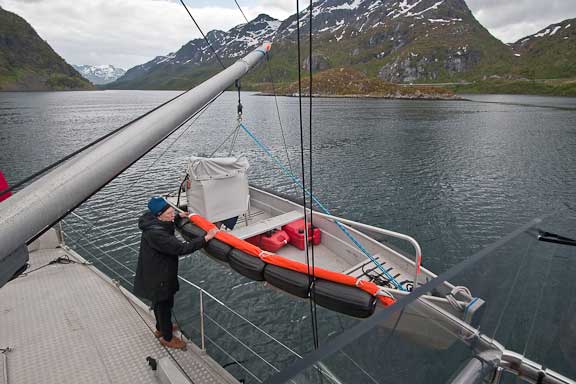 As the weight of the dink moves outboard Wind Horse assumes a slight heel to port. The boom responds by angling out to the extent allowed by the afterguy, with the dink just clear of the lifelines. 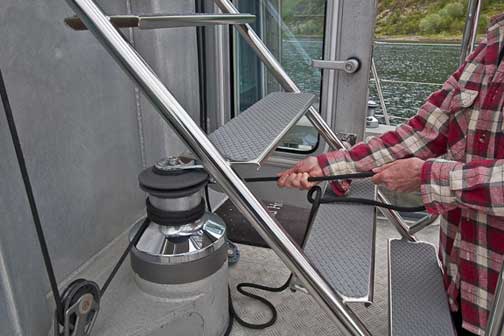 A single wrap is then removed from the winch (leaving three), using one hand as a brake on the remaining wraps (there is a rope clutch on the halyard which can also be used for this). 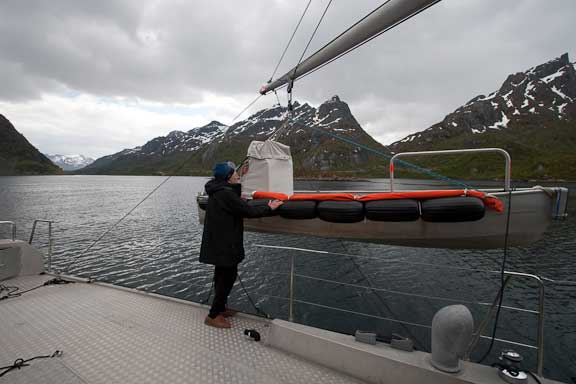 The dinghy is guided by one of us while the other eases the halyard. 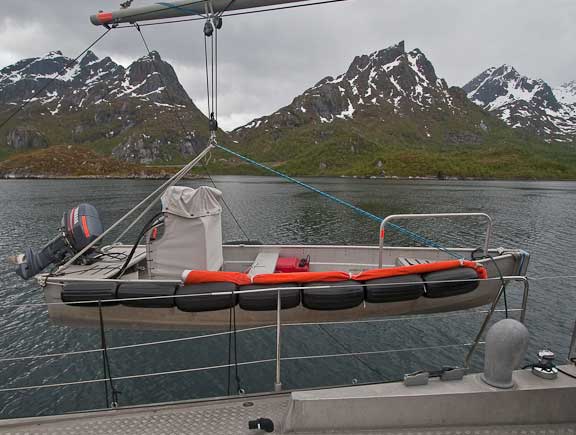 Once the dinghy fenders are even with the lifelines guiding is no longer required. Note in all of the photos with the dink outboard, how the afterguy is tight from the slight heel, while the foreguy is loose. 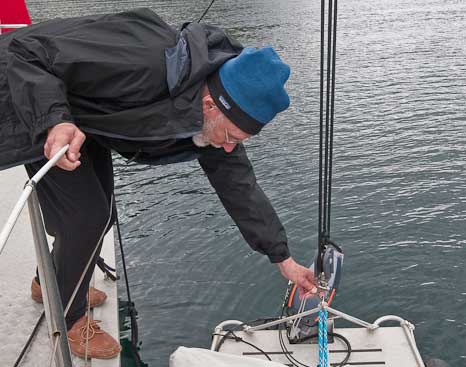 With the dink afloat (and the painter attached!) we pull the snap shackle pin to free the dink. The dink is then trailed aft and we board from the swim platform.

Hoisting back onboard is essentially the reverse of this process. The dinghy lifting sling is always attached and ready to go. It is typically left on the steering wheel, where it can be reached by bending over the life lines.

The process to launch the dink, starting with untying the boat, typically takes three minutes. Rehoisting is the same, plus another three to five minutes to secure the dinghy if we are heading to sea.

Because this process is so quick and easy, we typically hoist the dink on deck each night. This provides security for the dink, reduces corrosion on the outboard, and has us ready to depart should weather warrant a hasty exit.

Handling the dinghy in a bouncy anchorage is a totally different story, especially if you are short handed. Because we are working at deck level motion is reduced (compared to what you find if the dink is stowed on an elevated platform). But if the boat is rolling, and there are just two of you, coordination – which comes with practice – is essential. The heavier the dinghy, the harder the job. We’ve lived with our dink over the last four years and we would not want to handle much more weight in a rolling anchorage. But if you add a third person, then the fore and after guys can be used to control the boom (the extra set of hands operates the guys) and the rough water process becomes a lot easier.

The rowing dink weighs about 125 pounds (55kg) and is easy for a one of us to launch and retrieve on a single point halyard.

This entry was posted on Sunday, June 7th, 2009 at 9:51 pm and is filed under FPB Series Notes. Both comments and pings are currently closed.


5 Responses to “Launching and Retrieving the Dinghy”