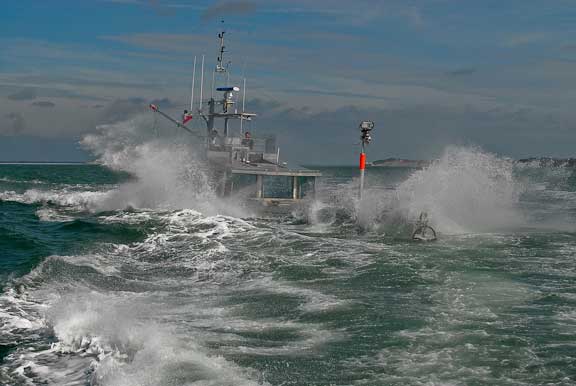 We’ve received a lot of comment on the Motor Boating and Yachting story about their sea trial aboard Wind Horse. They have been kind enough to allow us to share these photos from their story and a few others. To see their story click here.

To begin with, as they describe in their text, this was a blustery day off the Needles in the Solent of the U.K. There was a four to six foot (1.2 to 1.85m) close spaced chop running, and Wind Horse was knifing through these waves with her usual ease. Not very interesting photos with hardly any spray.

In order to make things more interesting the photo boat, with its three foot (90cm) wake, cut back and forth in front of us,adding its wake on top of the wind waves.

What you see here is Wind Horse doing exactly what she is designed to do, piercing the resultant combined sea. 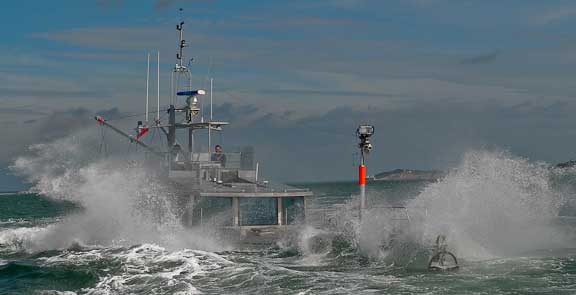 Now a close up. As a point of reference note the base of the anchor. At rest this is five feet (1.5m) above the water. Then look at the spray, or lack thereof. There is little fuss at the bow, and some thin release by the front of the house. Cutting through the waves is what we are designed to do. 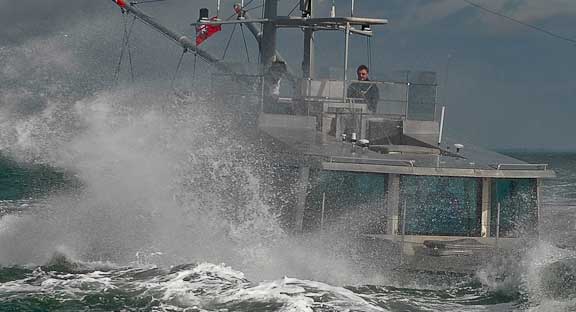 The Tech Editor and Boat Test Editor from MB&Y are sitting on the flying bridge, without foul weather gear, staying dry during this process.

The tricky part of this design wise is to penetrate the wave, and then have the correct distribution of buoyancy to generate lift before solid water comes aboard. Having now covered  40,000 miles with Wind Horse, some of which has been uphill in very large and steep seas, we can attest to the fact that she is amazingly dry.

Now a series of pictures with only the Needles seas. We are just getting into an area here of bigger waves. These are six to seven feet (1.85to 2.15m). 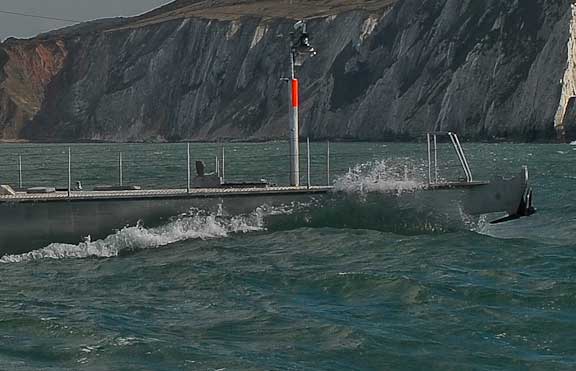 You can see how Wind Horse cuts into the wave. Sans the photo boat wake there is virtually no spray off the bow. Just a touch at the level of the rub rail.

If this is of interest there are lots more detail and photos of different sea-states in the FPB section of the Dashew Offshore website.

This entry was posted on Tuesday, June 16th, 2009 at 12:36 pm and is filed under FPB Series Notes. Both comments and pings are currently closed.