Piloting In Fog – How The New Flying Bridge Is Working Out 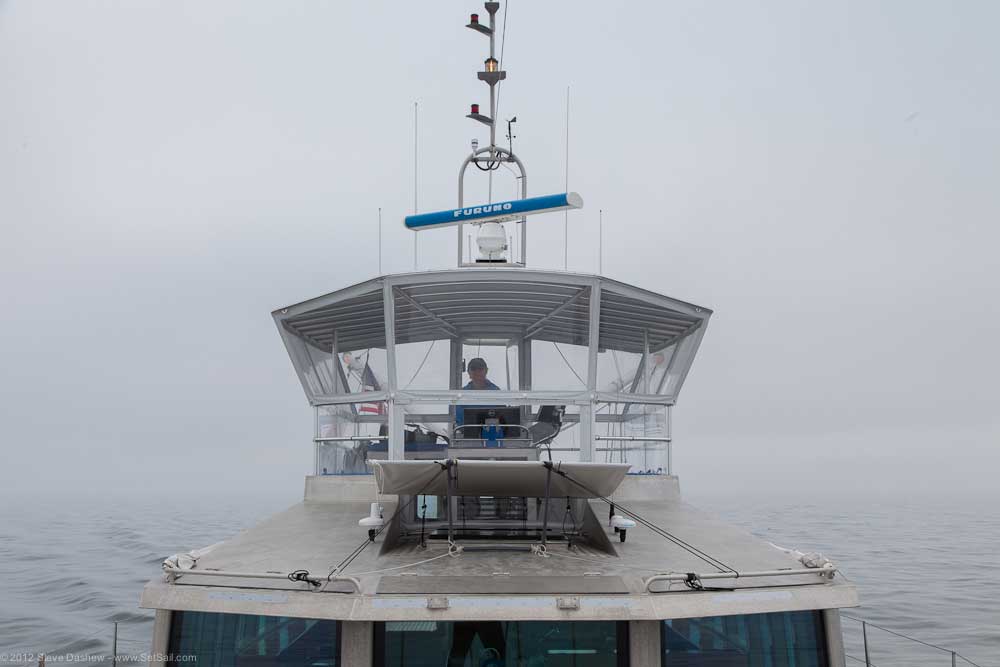 If there was ever a test for the re-modeled pilot house aboard Wind Horse, it would involve piloting in thick Maine fog. Between navigation, keeping watch for other vessels, and dodging lobster pots, it is essential for crew, visibility, and electronics to work efficiently together. 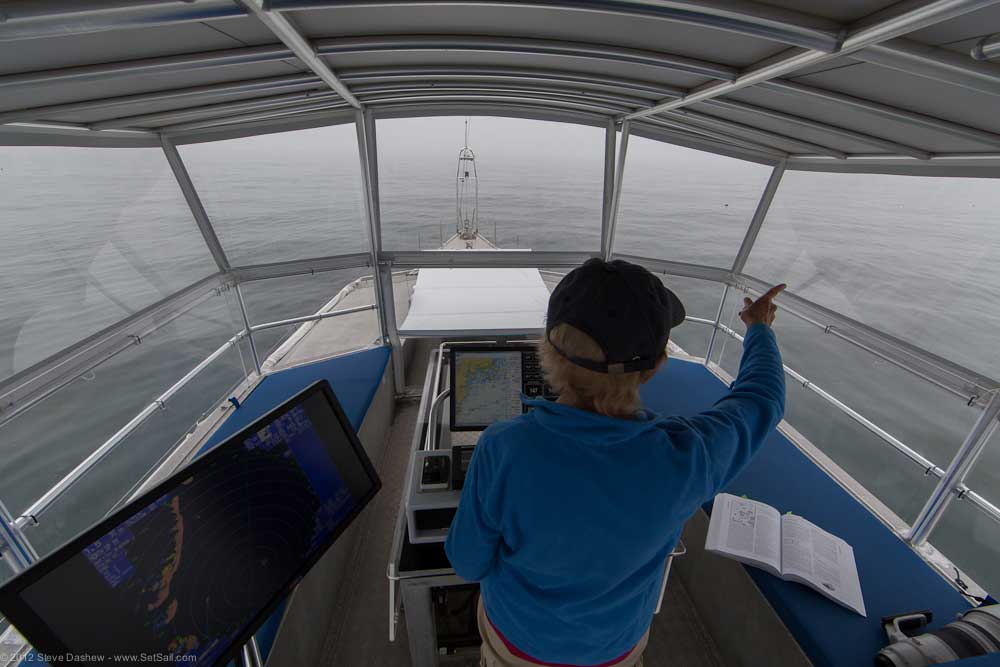 We have been pleasantly surprised at the visibility with the forward window closed. In heavy dew, which brings a fine rain flowing into the flying bridge and coats our eye glasses, the slight loss in visibility with the closed window is more than made up for by maintaining clear glasses. 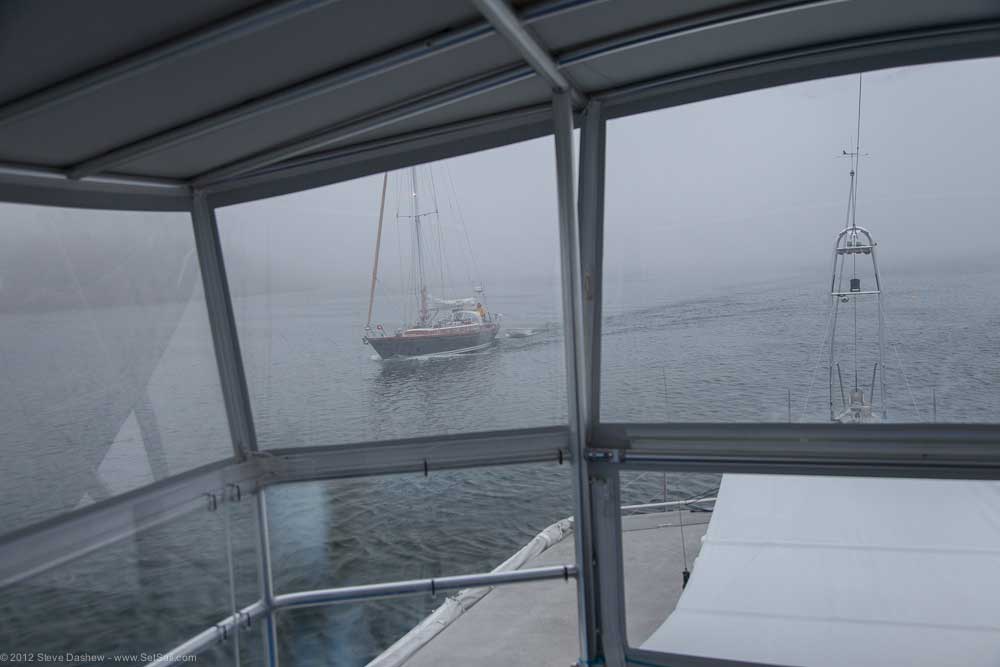 Here is an example of another yacht, easily spotted an eighth of a mile away. 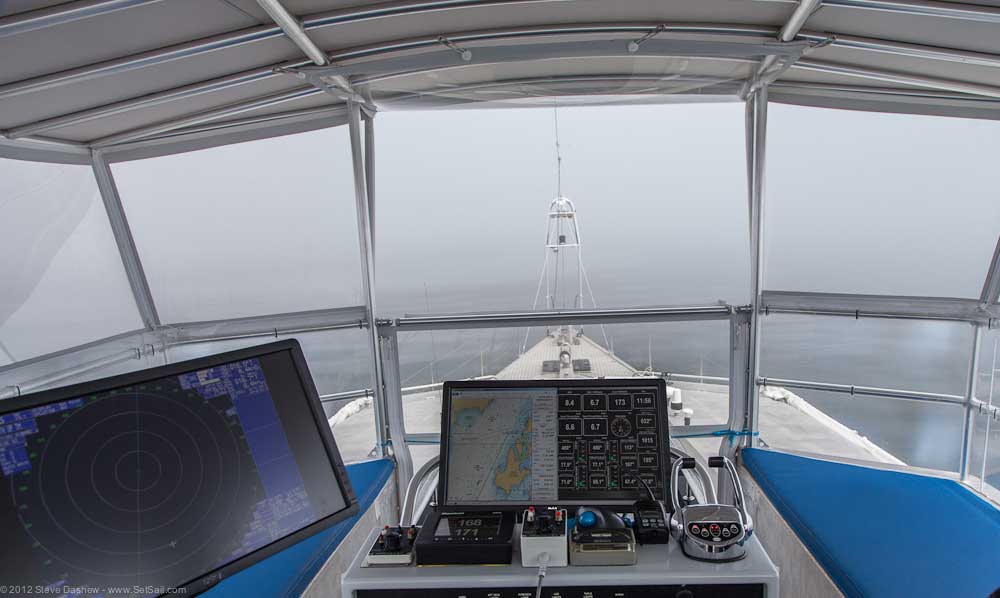 And for comparison, the view in thicker fog with the window open. Earlier, we discussed the monitor set up we are testing: a pair of standard Dell 22″ / 550mm wide screen LED screens. A key factor in glare like this is their horizontal polarization. When we are wearing our polarized sunglasses, which give us much better visibility, they also improve the view of the monitors, glare like this being about the worst case. Don’t get us wrong, these are nowhere near as bright as a true marine monitor, but at the price point, a reasonable tradeoff. In the photo above, both radar and chart plotter are on a north up configuration. 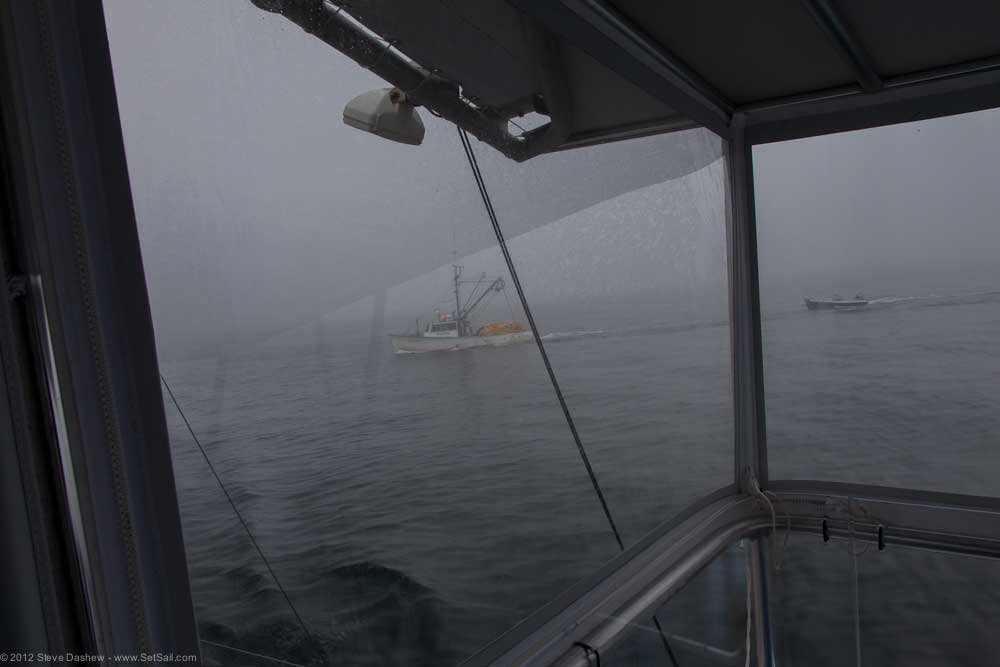 This little fishing boat appeared out of the fog, where a minute before it had been a radar blip. 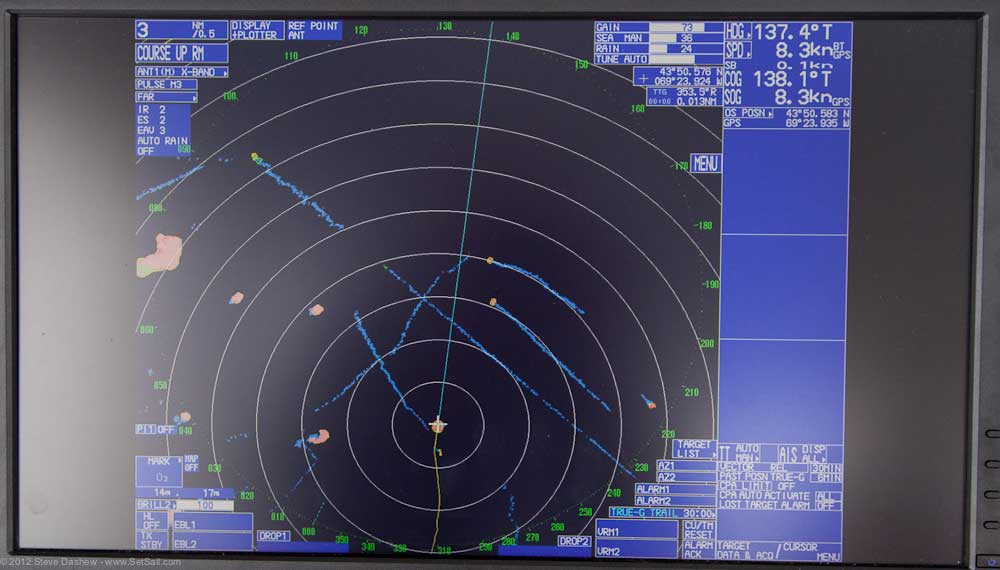 You can see the fish boat target below us, with the trail streaming aft of it. We typically have the radar at between 1/2 mile and one mile in these conditions. The three mile range in offset mode shown here is to check the general area, something we do once every ten or fifteen minutes in low visibility. 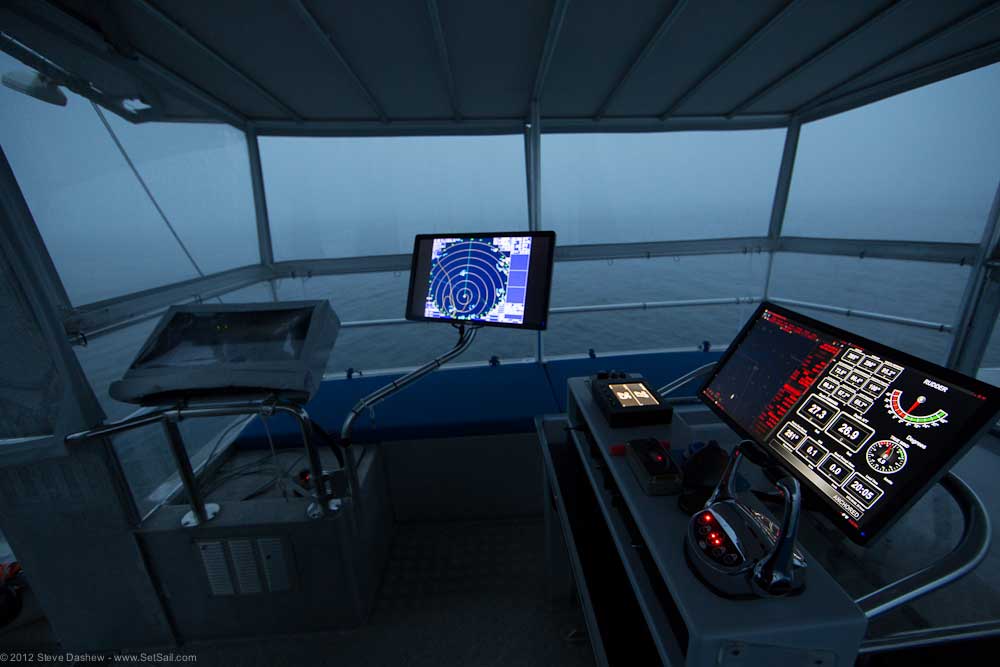 The radar/sonar monitor is on a swing arm. In piloting situations it is swung forward. 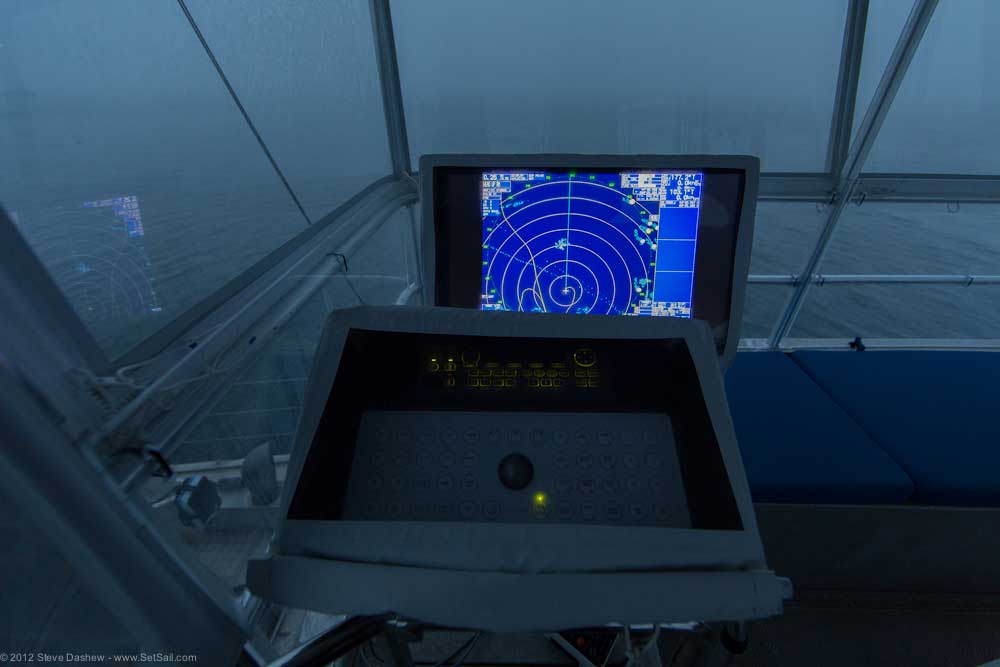 The rest of the time, i.e. when stored or well offshore, the arm rotates aft. The radar keyboard shown in the foreground, with the sonar control adjacent and outboard, have proven quite workable on the side like this. 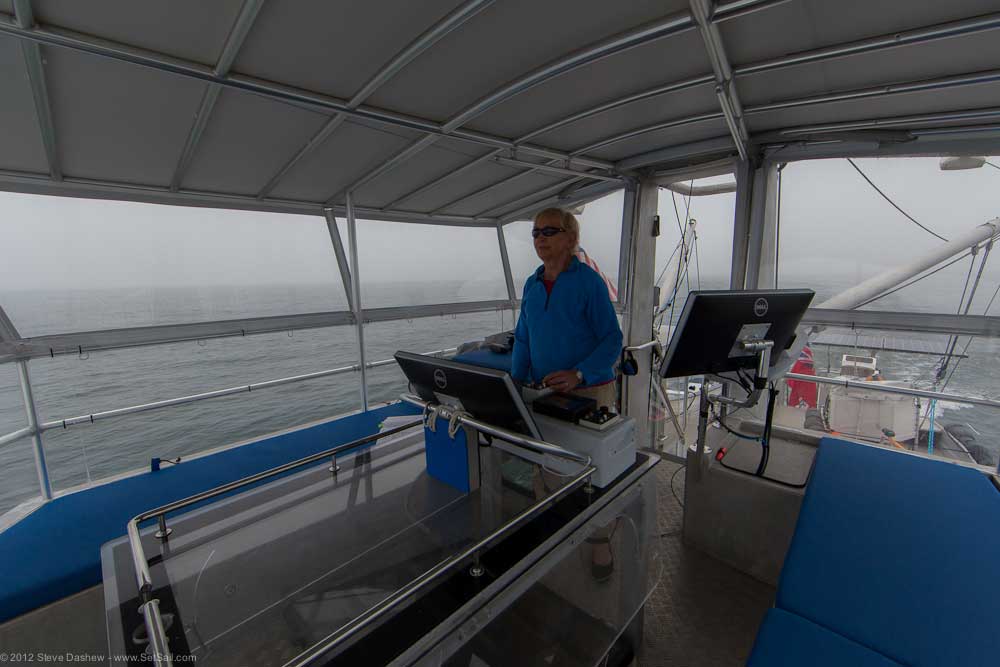 You can see here that we are still in test mode in the way the monitors are supported and their positions. With a few more weeks of experience we’ll come up with a final design. The only thing currently on the modification list is a longer swing arm, or some other means of having the second monitor closer to the chart plotter when in difficult surroundings. 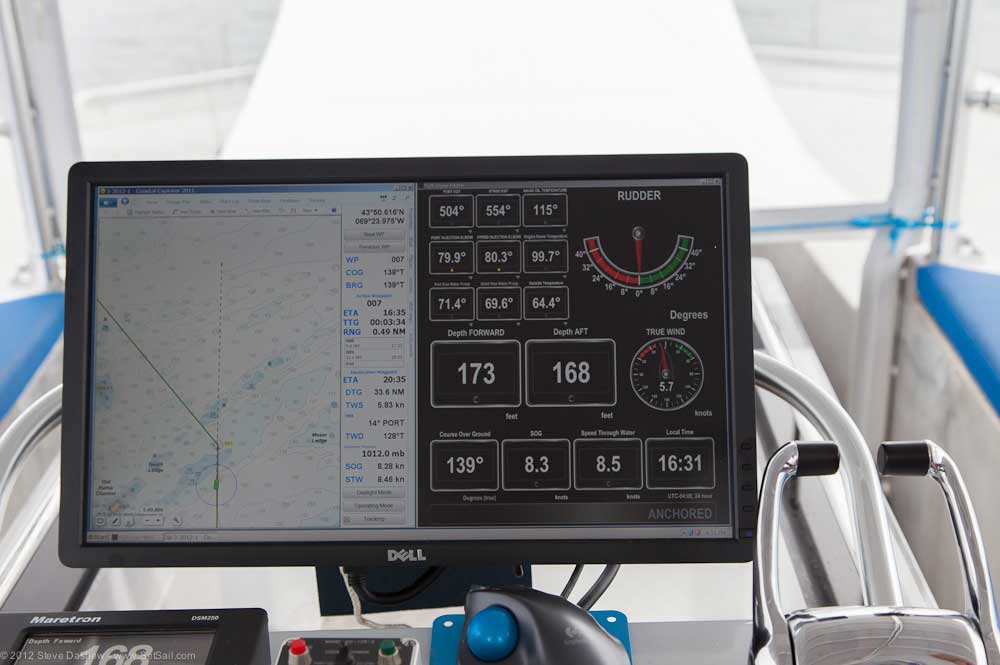 The chart plotter currently shares its real estate with the N2K system. Photographed in the fog glare, it is easy to judge its readability. 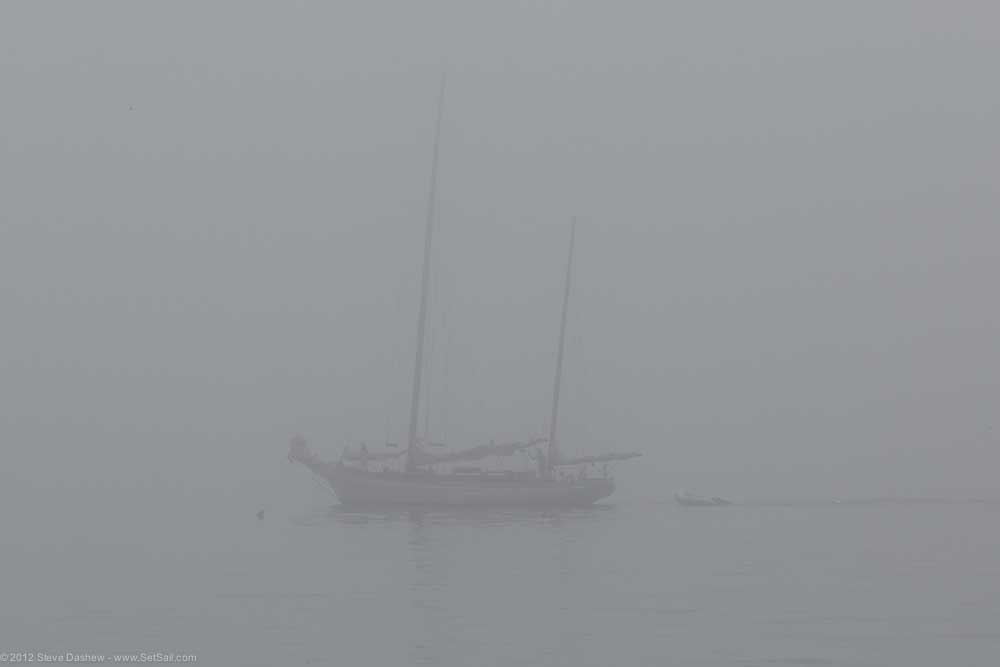 The extra height of the helm station helps with sight lines. And the enclosed, protected environment encourages watchfulness. 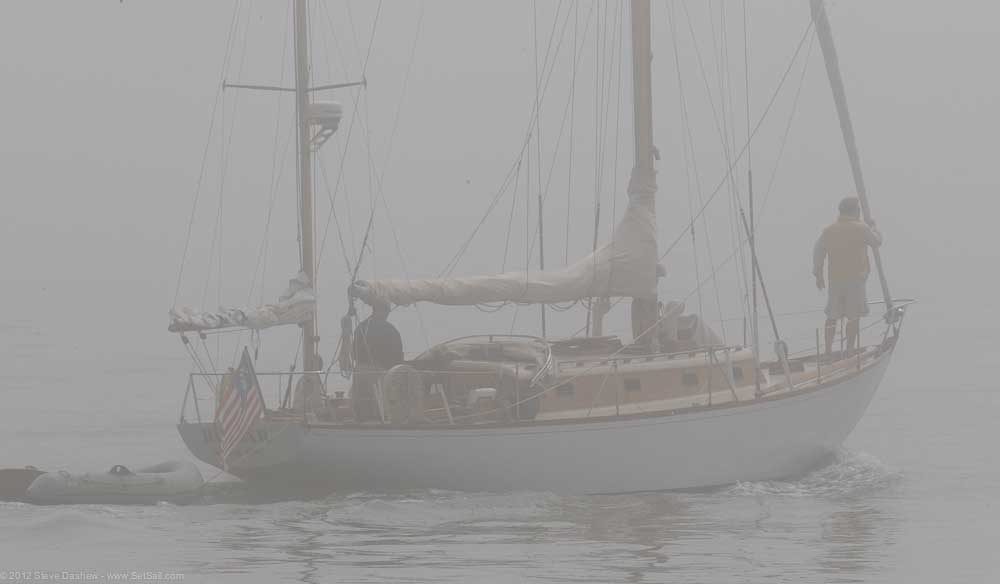 It was not that many years ago when one of us would be standing on the bow, as shown here, watching for surf, 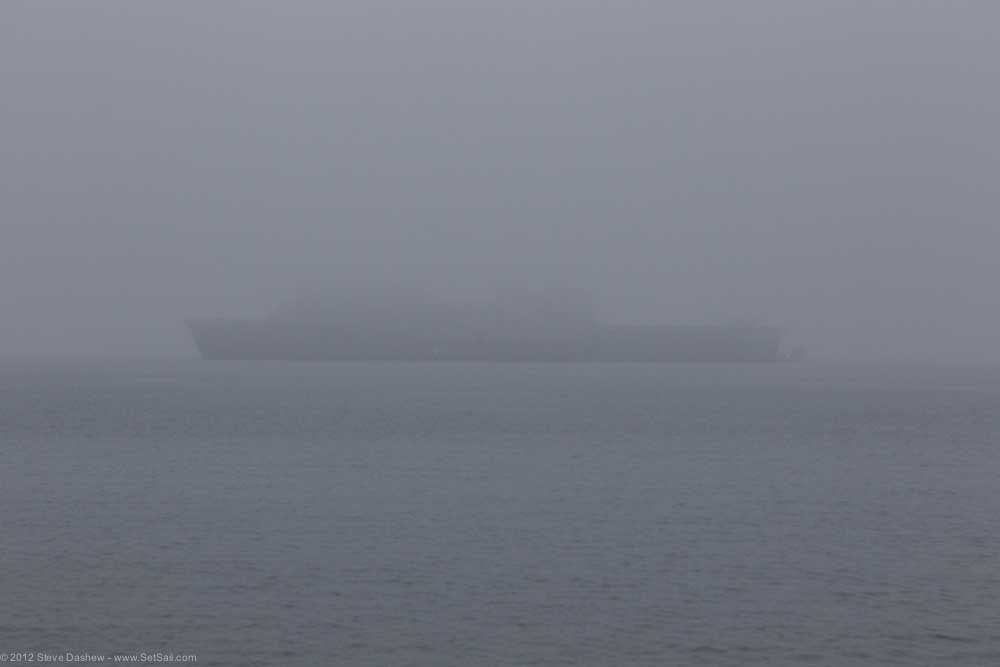 other vessels, and/or navigation aids. 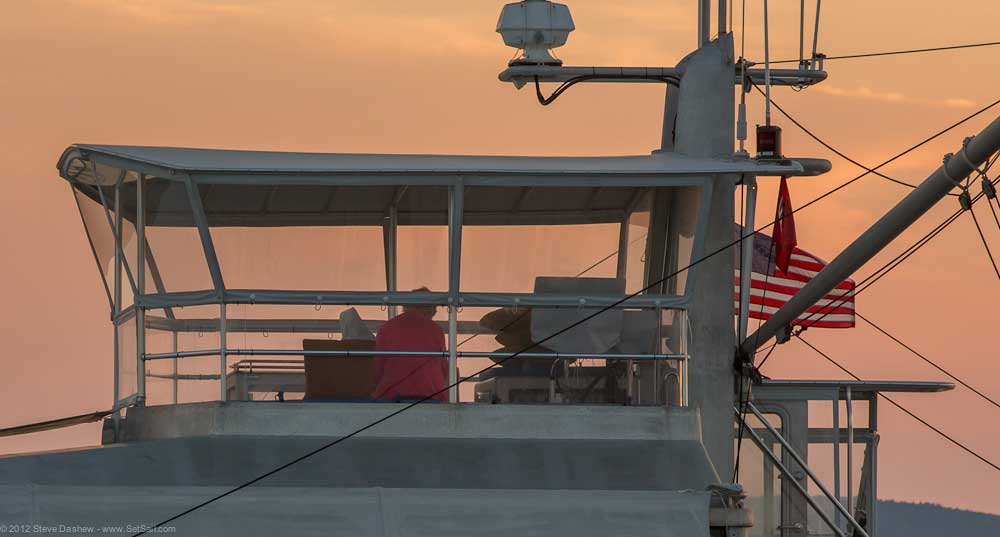 We think the new system an improvement. And when the anchor is finally down, it still has its uses.

This entry was posted on Wednesday, August 8th, 2012 at 12:26 am and is filed under Dashew Logs. Both comments and pings are currently closed.