Solar Output In Foggy Maine – Will Assumptions On The FPB 97 Stand Up In This Environment? 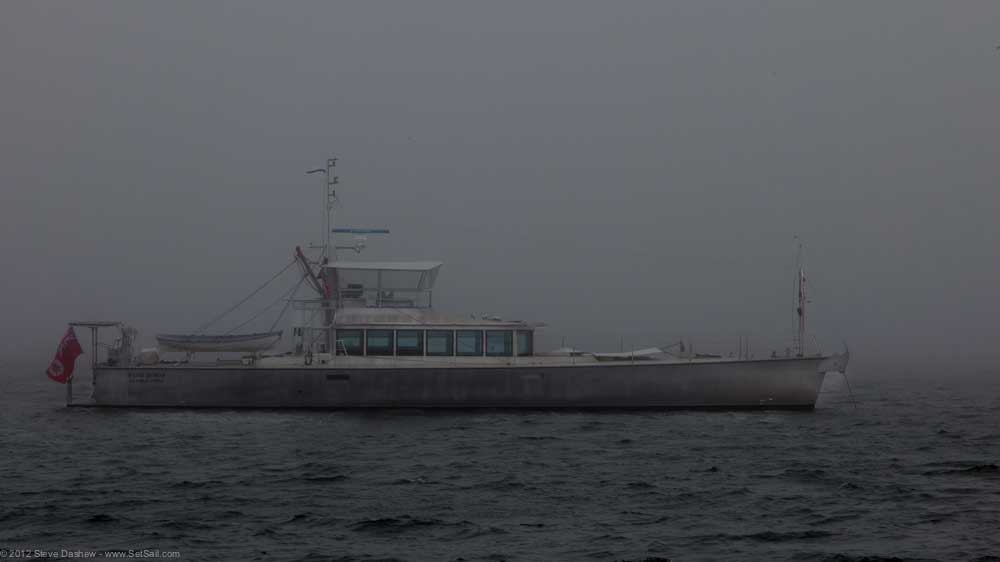 The big question with our solar power calculations has been: what would we see in the real world? The 320 Watts per panel (of which there are four) is the theoretical maximum. You then degrade for shadows, less-than-perfect angle of panel and sun, dirt on the panels, and clouds. We have assumed Maine would be an interesting test with its summer fog. The data has been surprising, and how it relates to the FB 97 assumptions even more so.

We are in the second week of August, so well past the extra long days around the summer solstice. On totally foggy days we collect a surprising 2.8 to 3.5 kWh. We are not sure how this happens, but there does seem to be a surprising amount of energy coming through the clouds. 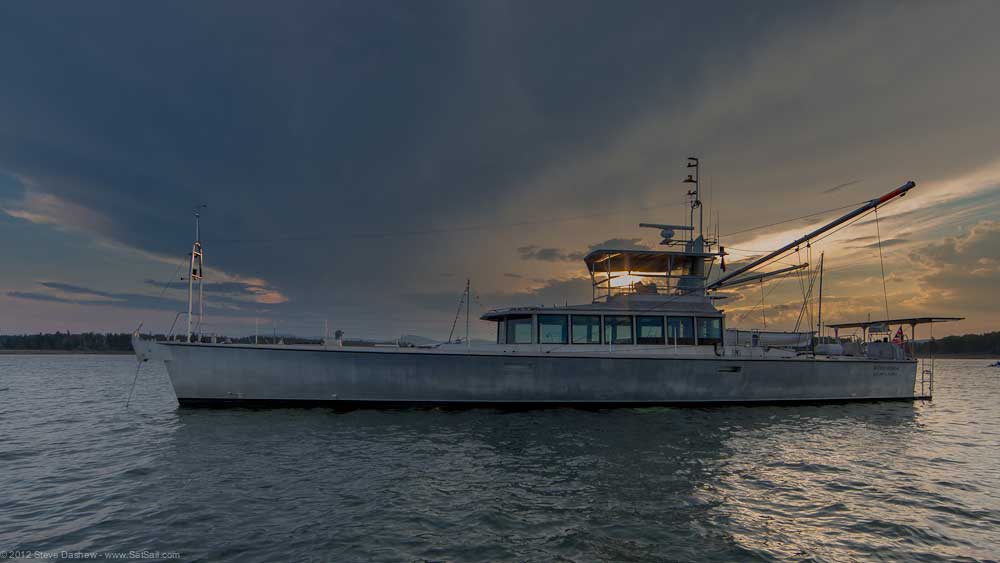 We’ve had some days which have heavy fog, then high clouds, and maybe 10% of the time relatively clear sunlight. Production here ranges from 6.0 to 7.5 kWh. And we have set a Wind Horse record on one day with no fog and mostly clear sun, with about 25% of the day having high thin clouds: 8.05 kWh. 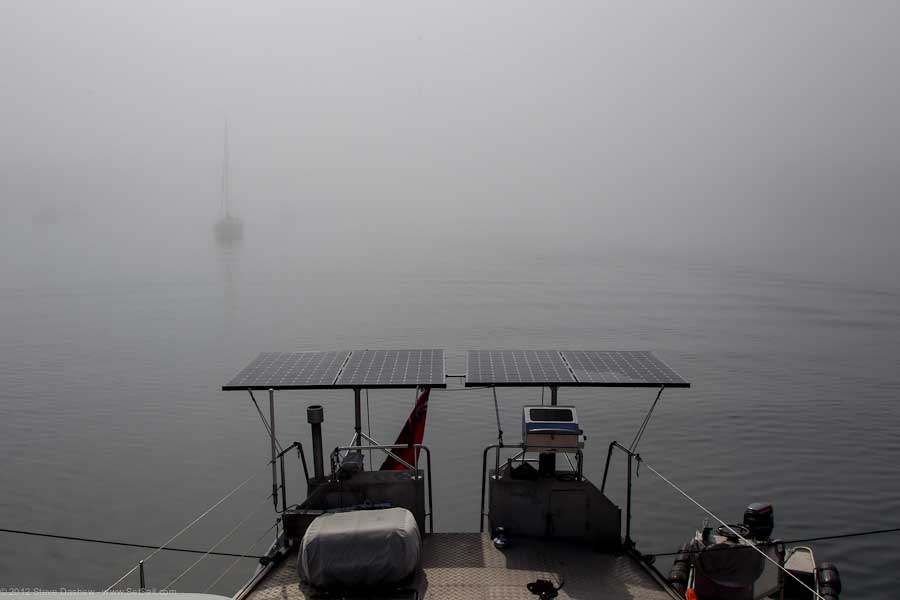 Another pleasantly surprising item is the lack of issue with dirt on the panels. They wash off easily and, for the most part, have not required cleaning. Salt buildup offshore has occurred, but also rinses right off.

We were originally concerned with the need to maintain a positive ground on the panel frames for maximum output, something not possible on a negatively grounded vessel, even with the panels isolated. Further research indicates that this is more of a marketing benefit rather than real world efficiency gain. The data on power collection is based on a negatively grounded panel.

If you talk to the purveyors of solar systems about the battery charging cycle they will tell you that every bit of power collected, that’s left over after deducting for the consumption going on during the day, will go towards charging the batteries. However, our research indicates this is not the case. Hoppeke, the suppliers of the traction batteries used so far aboard the FPBs, says that there is an initial amperage required before the amps collected actually go toward charging. For their tubular traction batteries this is calculated as follows: 60 milliamps for every 100 amp hours of battery capacity (at the C-10 rating) times the number of cells in the battery. For Wind Horse, this works out to  60 X 15 x 12, or 9.6 amps (24 VDC). Anything over the 9.6 amps does charge the batteries. Less than this and nothing happens. Since the amp hour meters show all the in/out, they will be overstating the charge benefits in most cases. 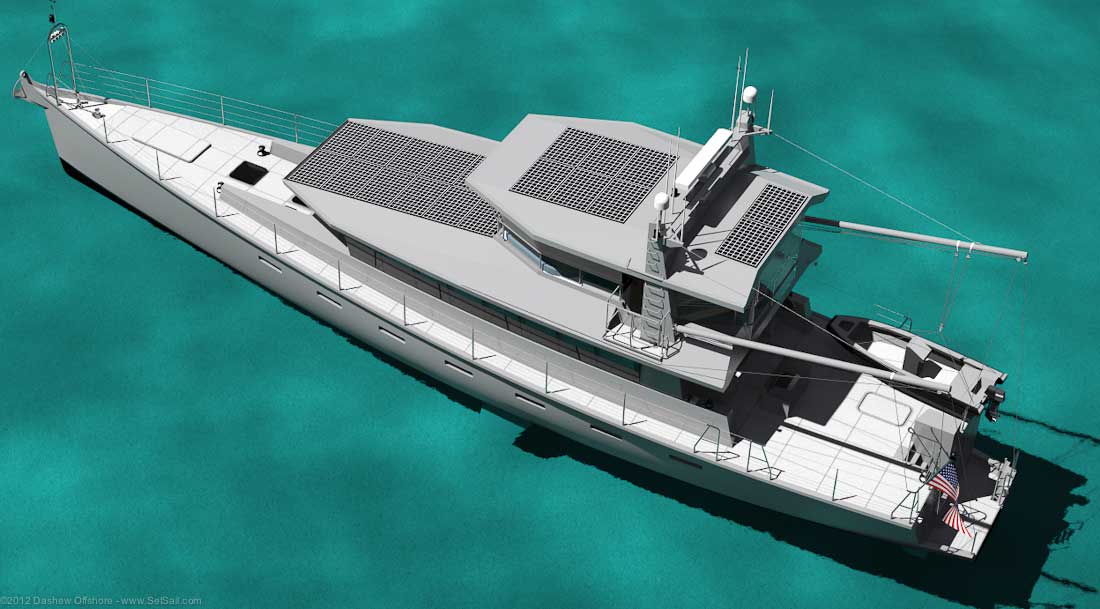 For the FPB 97, with substantially more panels and a 2000 amp hour battery bank, the numbers are as follows: 60 milliamps times 20 x 12, or 14.4 amps. The FPB 97 has five times as many panels as Wind Horse, although they will be somewhat less efficient due to angles and shading. To be conservative, assume four times the Wind Horse output. We regularly see +10 amps within two hours of sunrise or sunset, even in somewhat cloudy conditions. 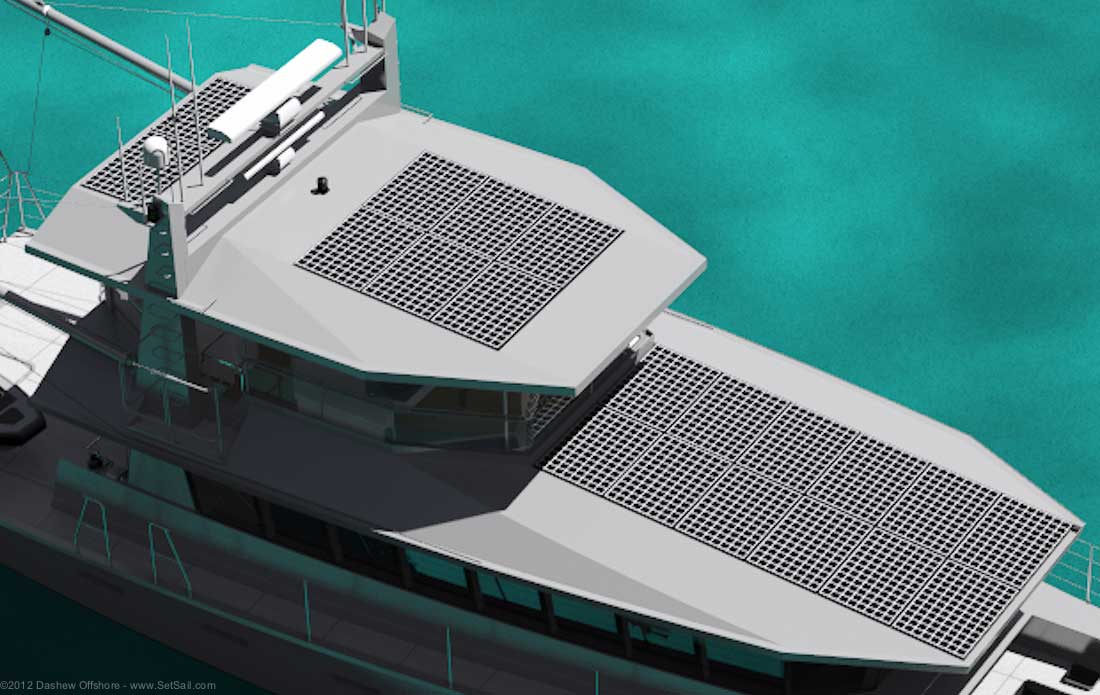 This scales to an initial 40 amps with the larger FPB 97 array. Of course you need to deduct the consumption aboard from these figures.

While we installed the array aboard Wind Horse as a test to see what we could expect on the FPB 97, now that we see the results, we are very pleased to have made this choice. At their very worst in terms of output, assuming no charging of the batteries, they cover 100% of our daytime power needs, excluding the dryer during wash cycle. This is more than half our normal total consumption, and it means we can sit for a week or ten days without moving or running the genset. Very cool indeed. Should there be a disruption in the fuel supply, or a world gone mad, we could easily modify our power consumption habits to live within the output of these four panels.

For the FPB 97, what we now know is that, in a somewhat less-than-optimal solar environment, as represented by summertime Maine, the solar panels will do the job envisioned.

It will be interesting to see how things work out in a winter tropical environment, with shorter, albeit sunnier days.

So far, it looks like the assumptions on solar energy are holding up.

Post script: Friday has given us low fog, interspersed with overcast, leading to rain in the evening. Solar output has set a record low, just 1.9 kWh. Given what must be a relatively thick deck of clouds, and a temperature cool enough to have us in long sleeves and jackets, we consider the output nothing short of amazing.

This entry was posted on Friday, August 10th, 2012 at 8:59 am and is filed under Dashew Logs. Both comments and pings are currently closed.


7 Responses to “Solar Output In Foggy Maine – Will Assumptions On The FPB 97 Stand Up In This Environment?”