Pulpit Harbor – It Weaves A Web 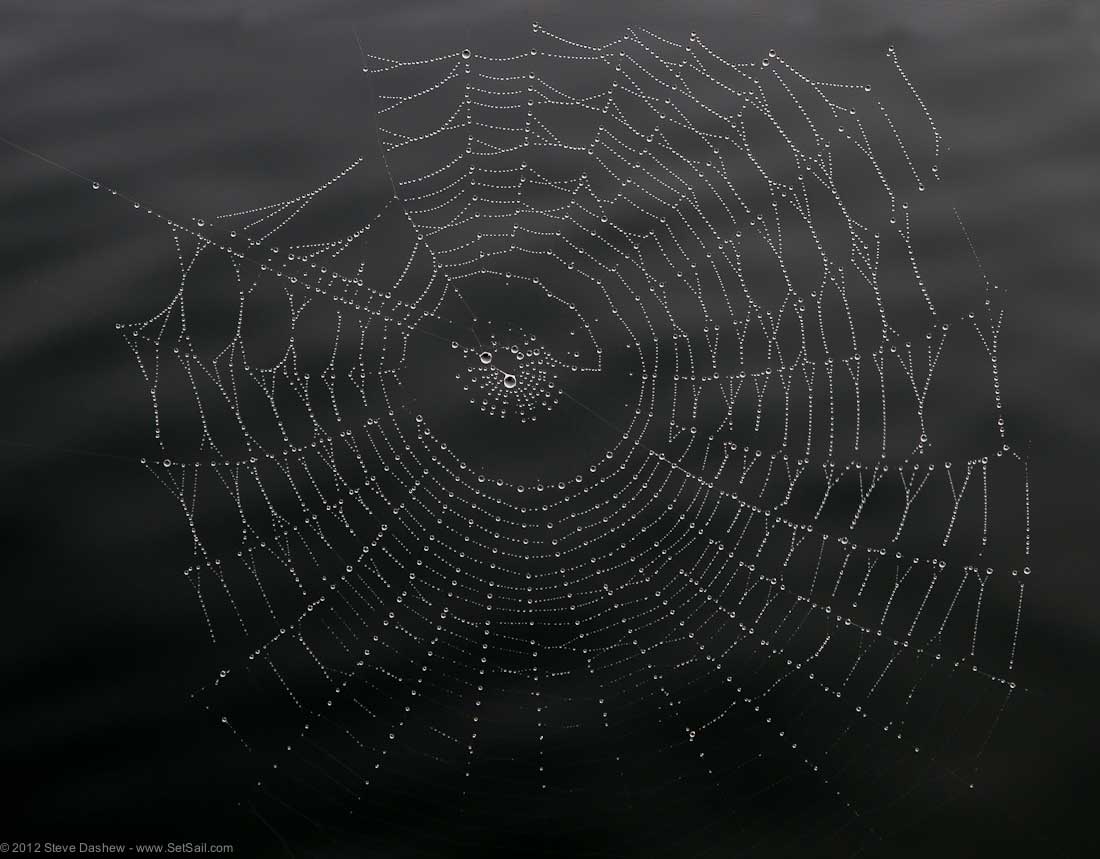 Pulpit Harbor, Maine is one of those destinations that can catch you in its web. There is room to anchor, it is well-protected from all but one direction, wild life a-plenty is in residence, interesting boats to study come and go, and there are friends new and old with whom to discourse. Add good communications to the outside world, and big city life in Camden and Rockland an hour away by boat, and you have an optimum cruising destination. 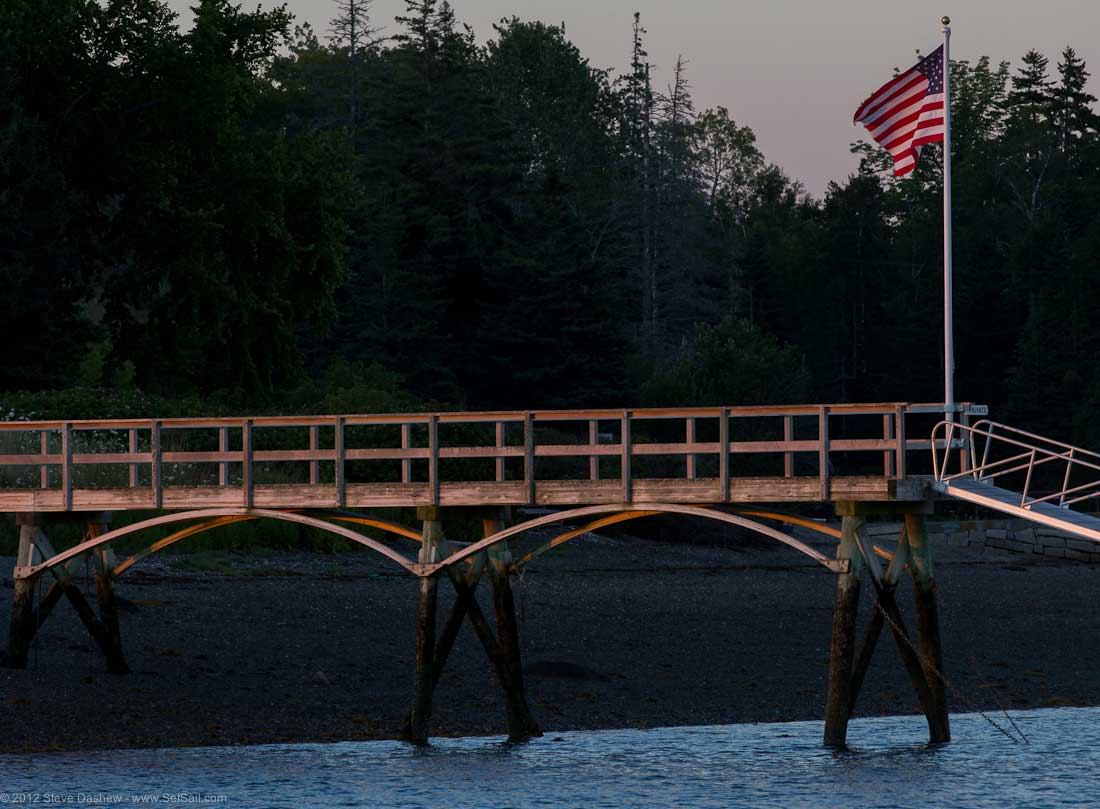 Shoreside development is limited, there are a few docks, one of which is public, and a nice walk inland, which we have yet to test since we have not seen cause to step ashore.

The variety of yachts has brought back many memories. Take this lovely yawl. Our first lead mine, Intermezzo, was a similar CCA design, with graceful overhangs, and exactly the same color, both of which characteristics were highly inefficient. 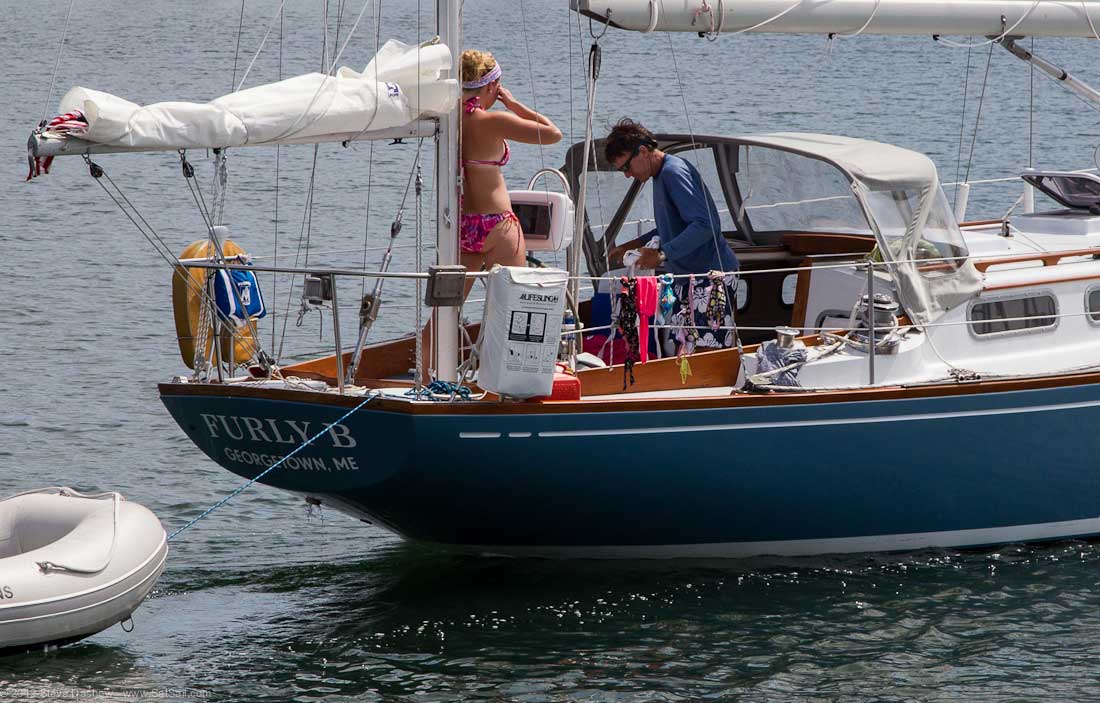 Although it has been less than clear, for the most part, even the fog has been warm. If this is global warming, we like it. 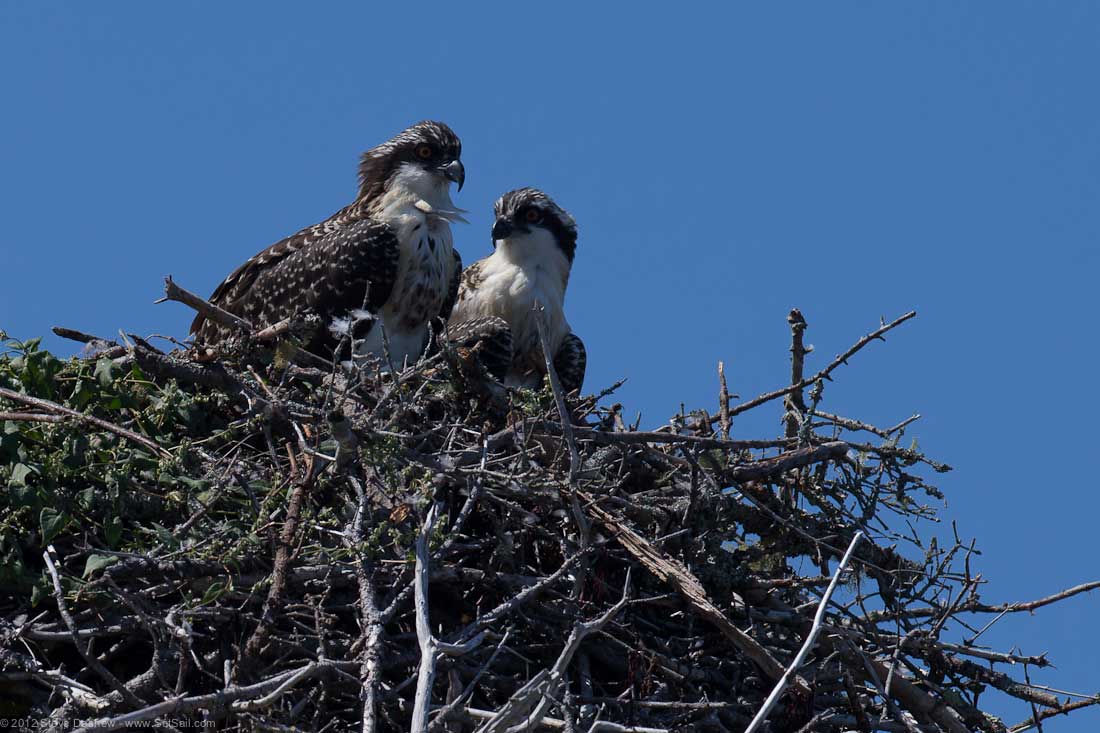 There is an osprey nest guarding the harbor entrance, with several chicks. 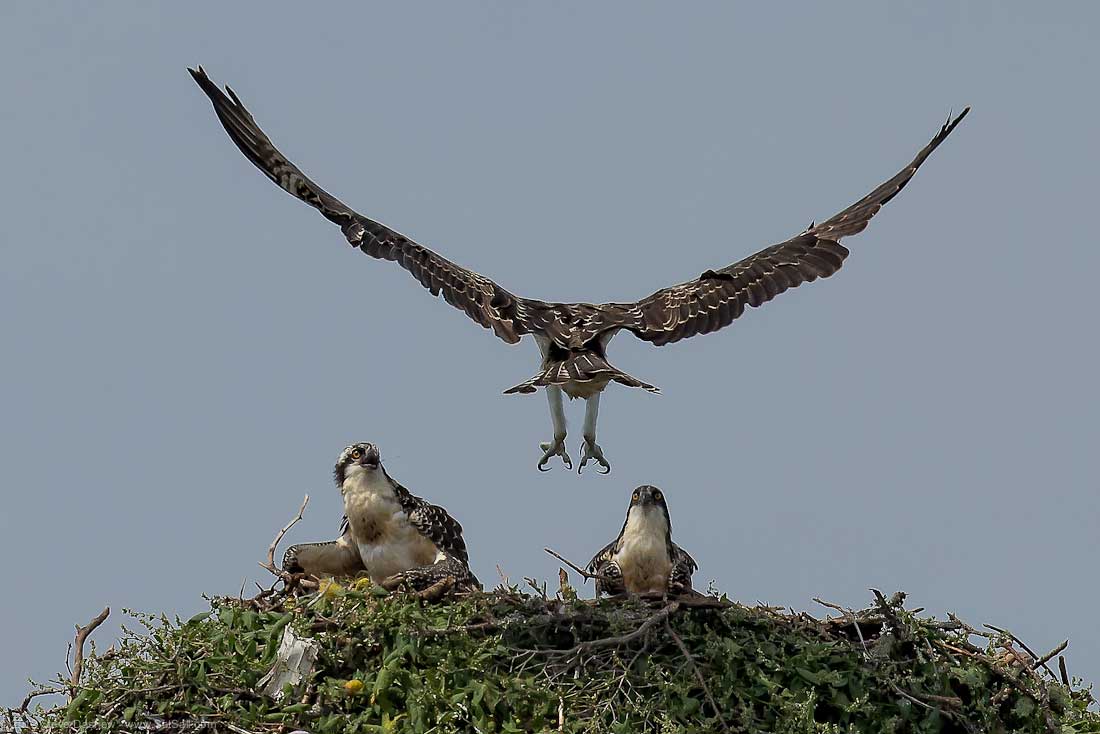 The parents periodically sit with the youngsters, flapping their wings in what appears to be encouragement to fly, but so far no takers. 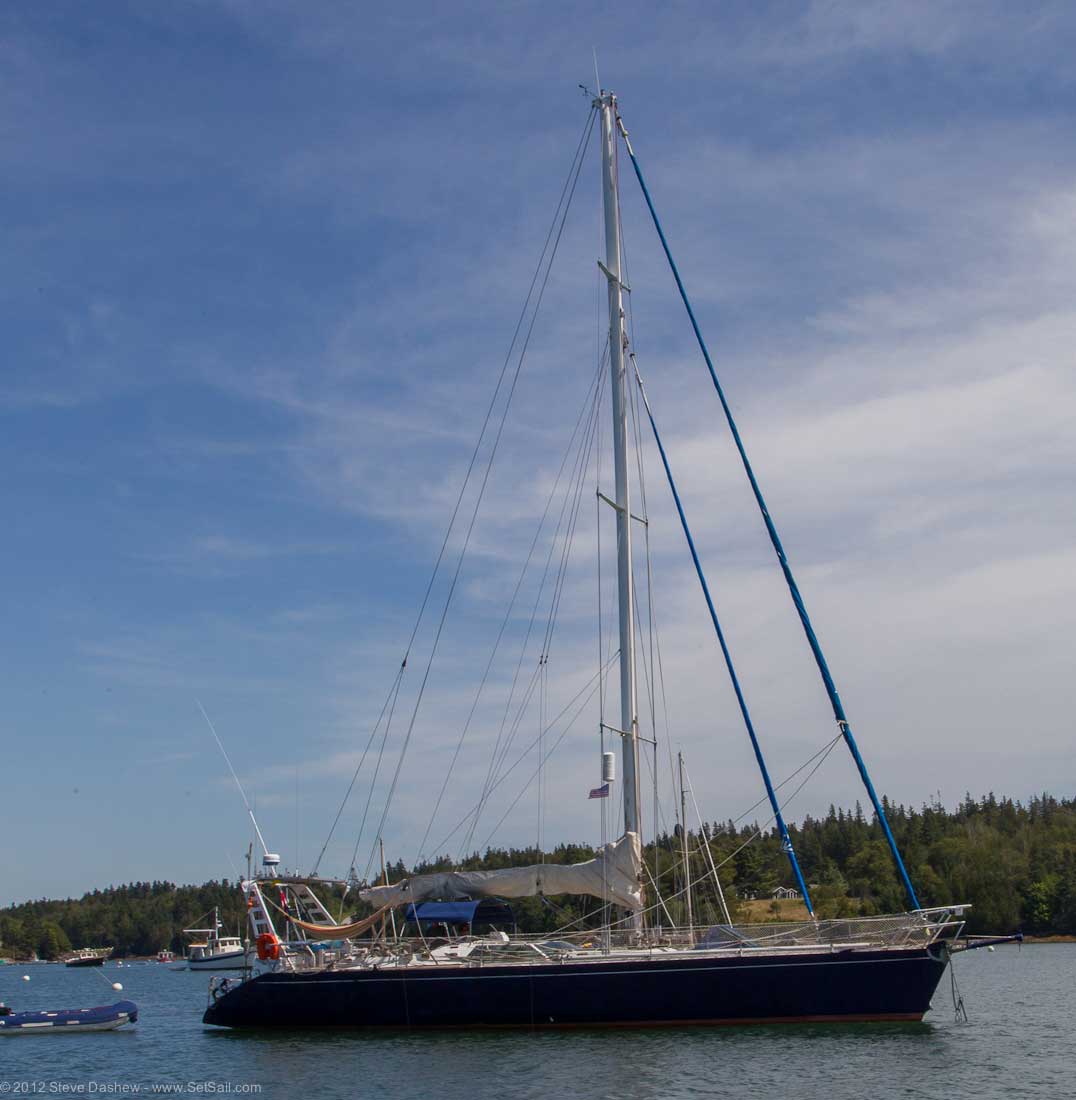 Here is a yacht which indirectly had a major impact on our efforts in the yachting business: Phillipe Jeantot’s Dumas design from the very first single-handed BOC around the world race. She had (then) unfashionably short ends. Prior to Jeantot’s win, our short-ended designs were too radical looking. Post Jeantot, we became more acceptable.

When the overcast clears, and the sky changes color, it is very much appreciated. 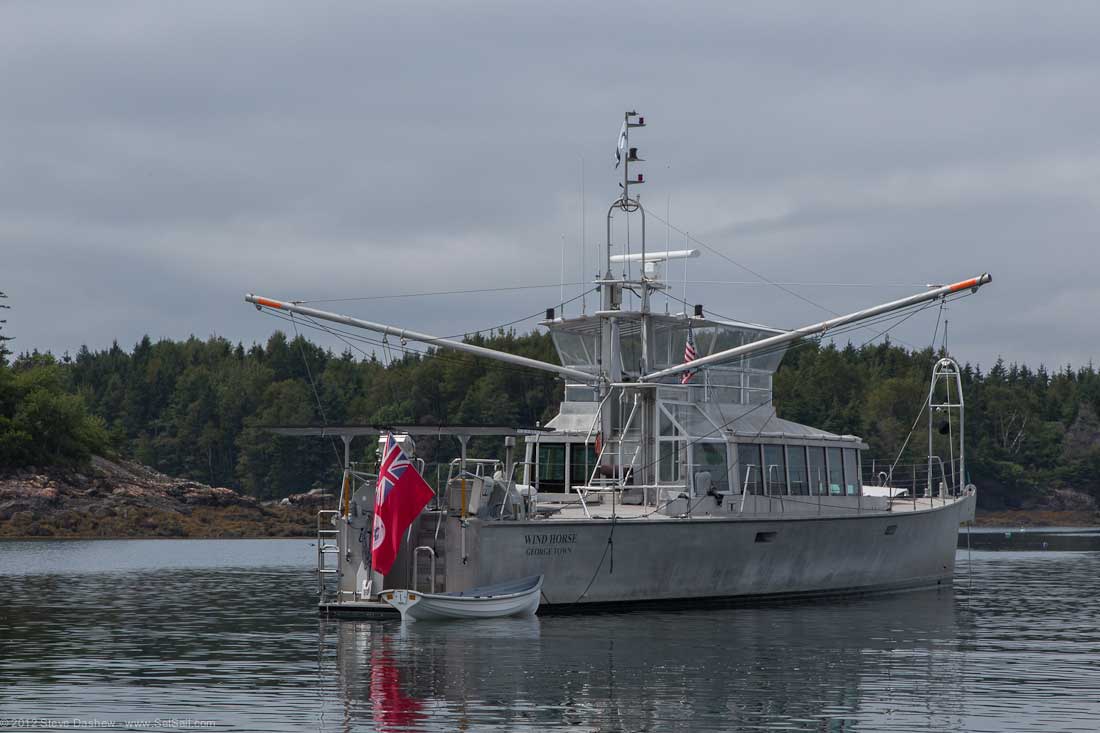 And blue makes us positively giddy. 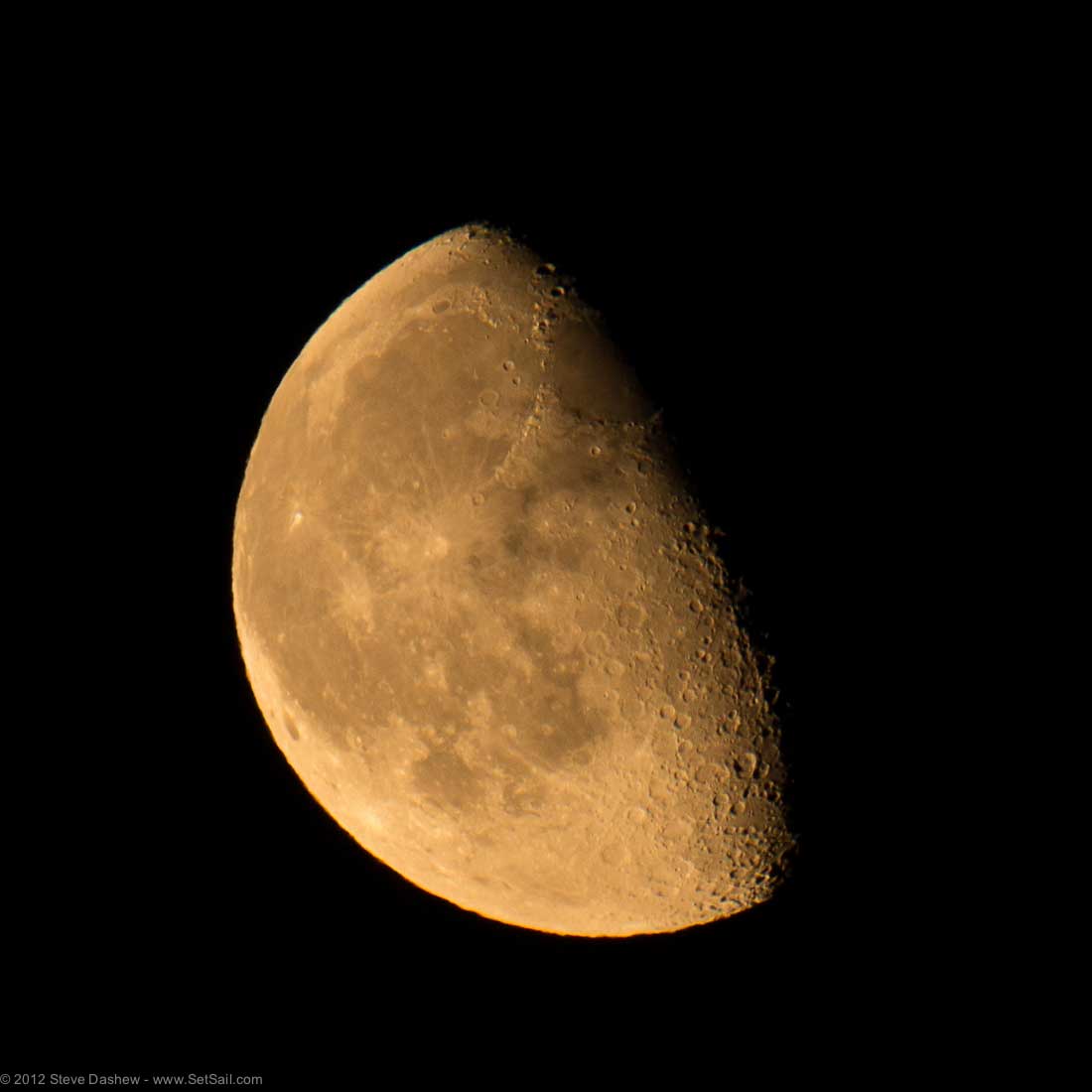 Although there remains some form of air pollution–witness the moon’s orange color–it is occasionally clear in the evening. 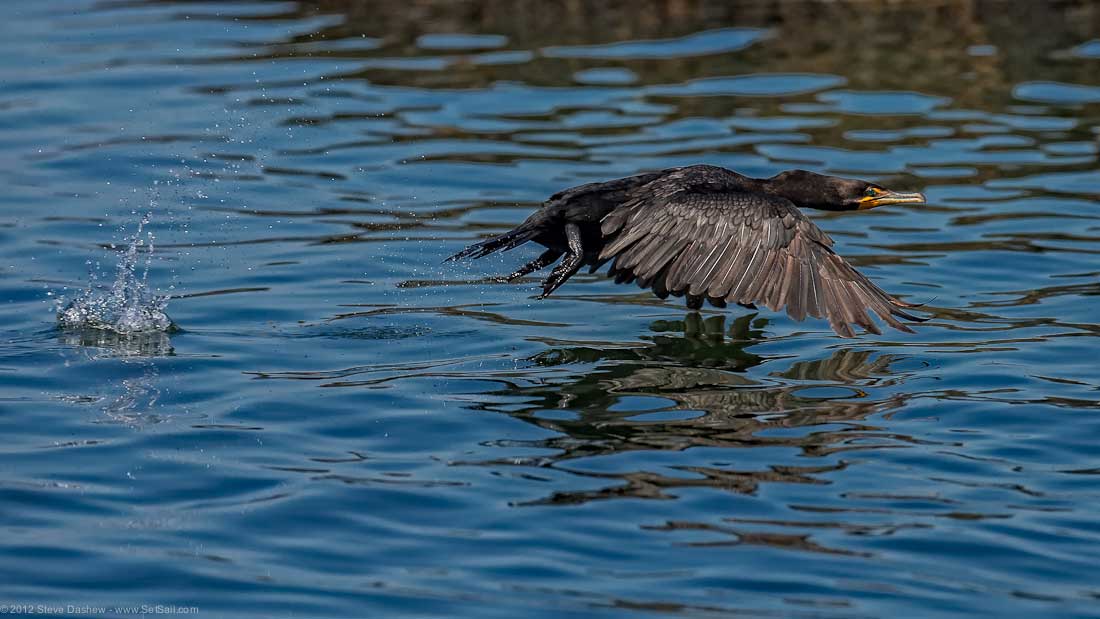 We have been testing a new camera body, the Canon 1DX. This is Canon’s finest offering to date and it is a truly remarkable piece of hardware. The photo above is what we call a snap shot, an unplanned quick pull on the trigger as a new event unfolds. Normally we might get one out of fifty or a hundred images like this from a snap. We have dozens of this variety from our first outing in the dinghy.

Pulpit is still a working harbor, and there are half a dozen lobster-men plying a very difficult trade, this year’s prices being extremely depressed. 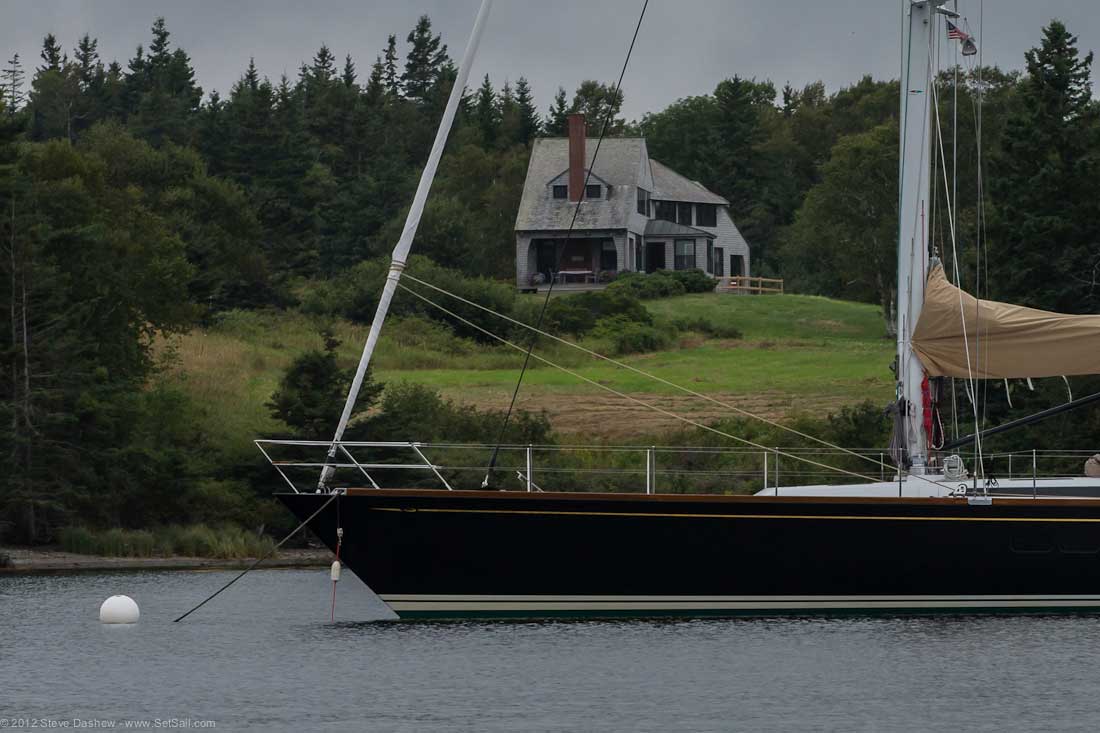 The contrast of the weekend cottages ashore, of which this is a modest example, large yachts, and lobster-men, all in peaceful coexistence, is a more pleasant aspect of society than is currently on display in the US election cycle rhetoric. 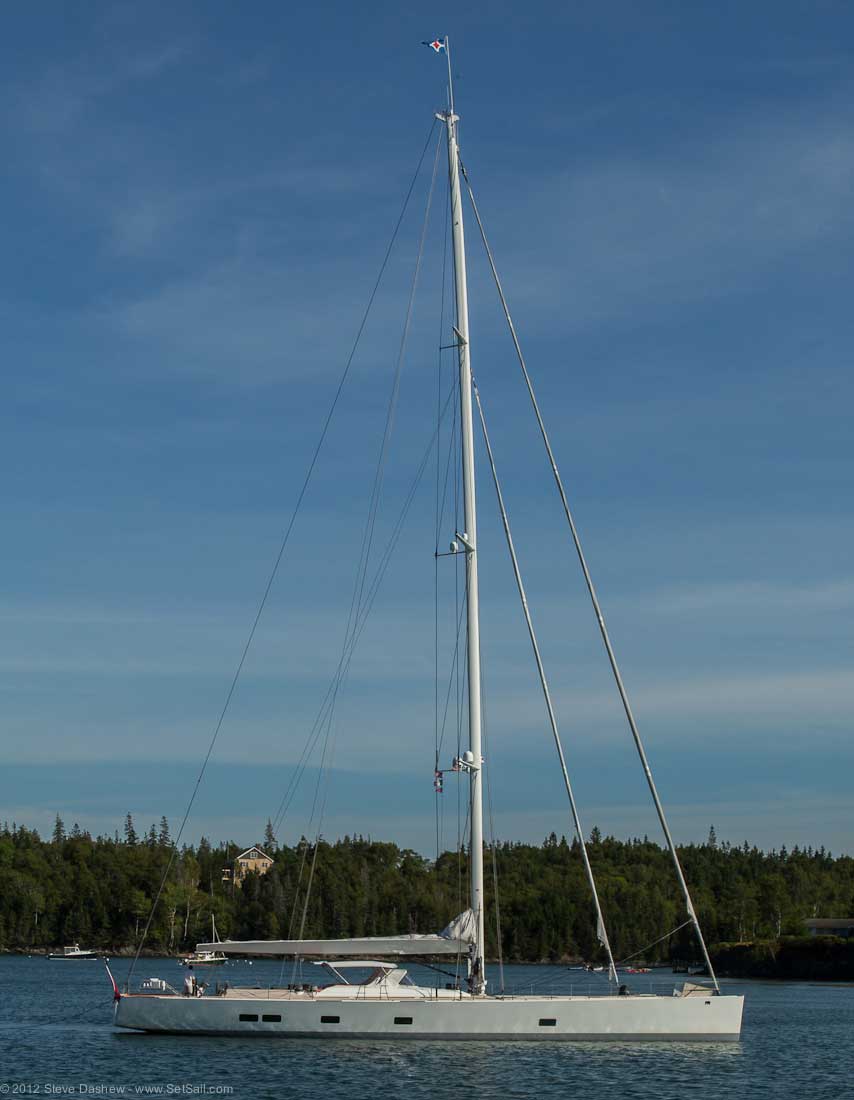 We started out talking about overhangs. Look where aesthetics have evolved!

There is little wasted overhang in this yacht, and we think it safe to assume she’ll be okay in light-going, speed wise. However, the very clean bow, sans anchoring gear (it being underwater), may be taking appearances too far. We prefer our anchor where we can see it and are 100% certain it will come up and stow, or deploy. 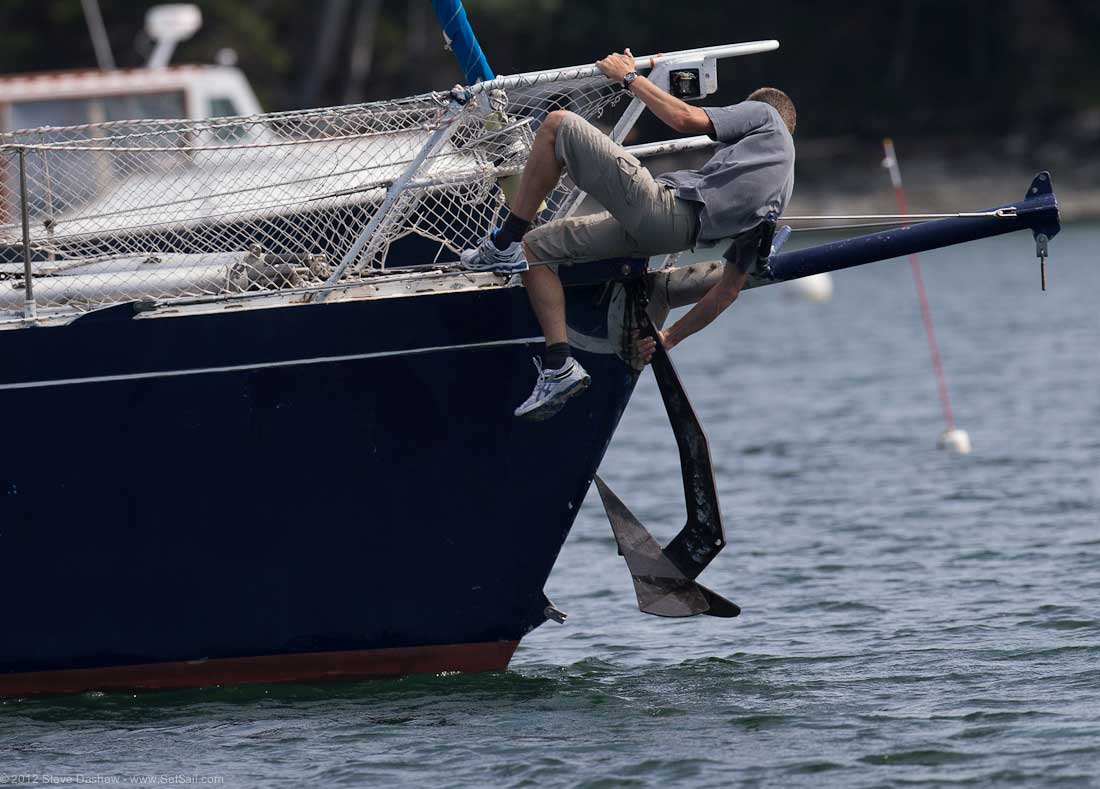 Of course you do need the correct geometry for the anchor to stow properly and self launch. 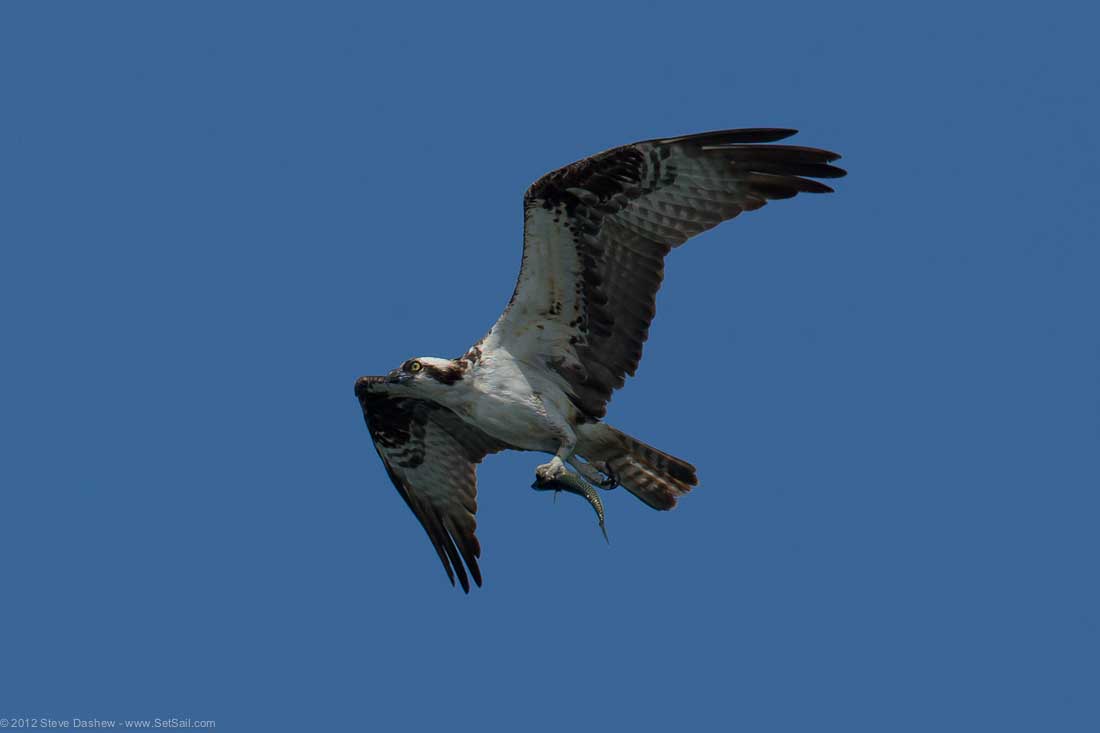 The ospreys put on a clinic in fishing and efficient cargo carrying skills. Note the prey, aligned with the direction of flight for minimum drag. 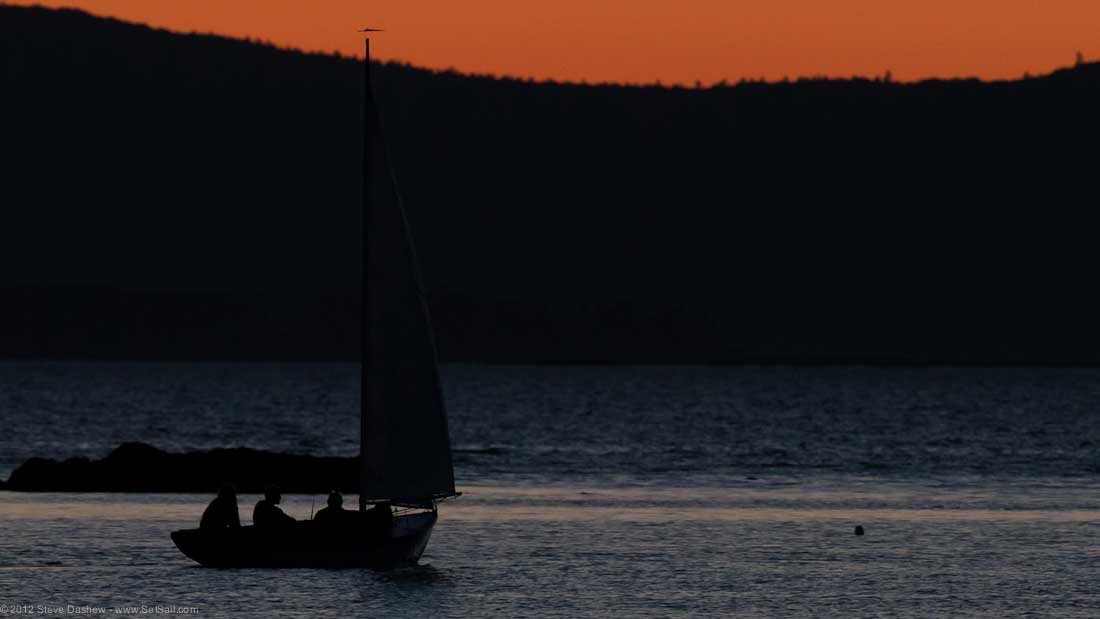 This is a sailor’s harbor, stinkpots being barely tolerated. In the late evening and early morning there will be folks out enjoying a quiet interlude. 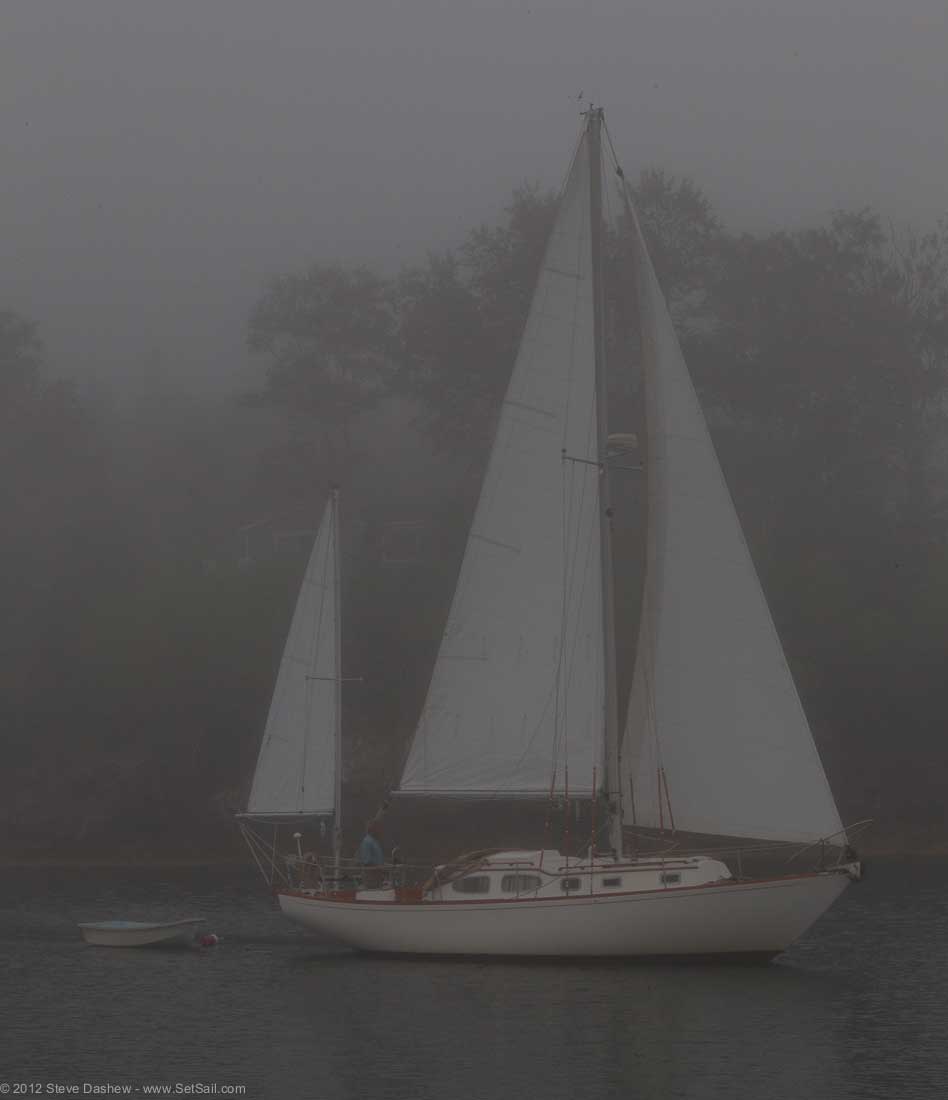 Yawls are in favor. Although this is a very inefficient use of weight and windage aloft, it does look handsome, and the mizzen is useful as a riding sail (but little else). 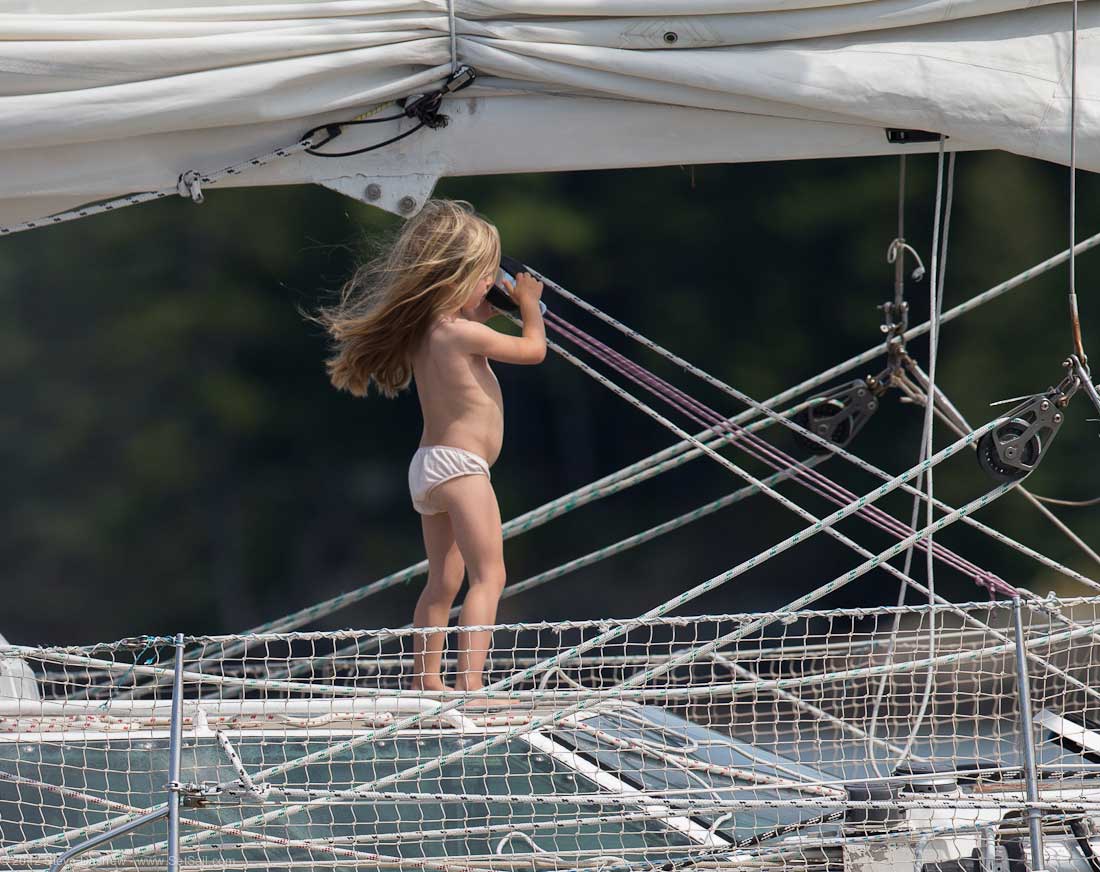 Now this takes us back a few years. 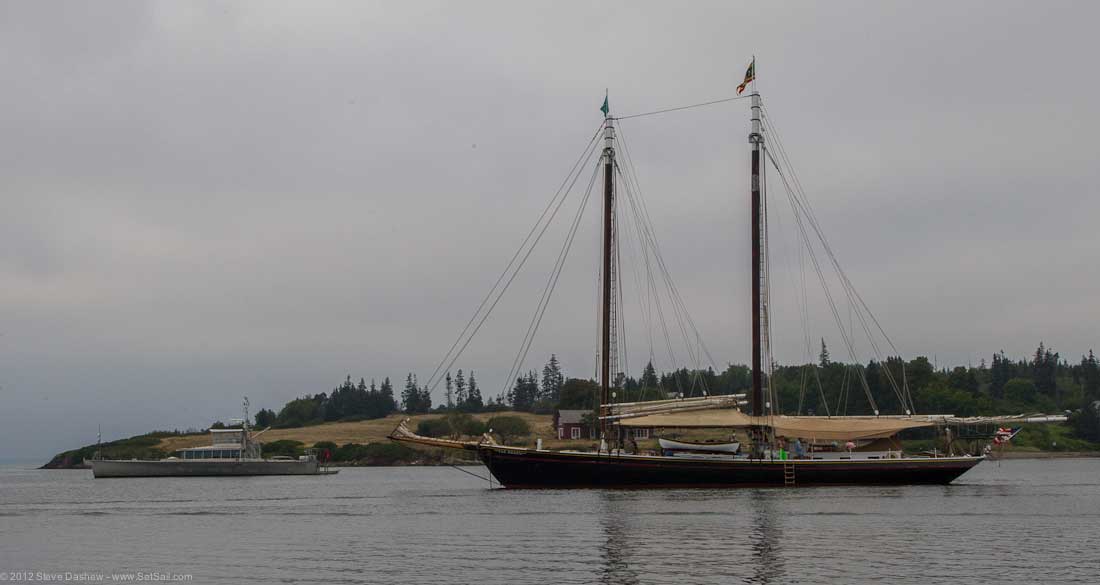 And since we’re being nostalgic, we’ll admit to a soft spot for schooners, of the traditional variety. Having gone to sea at a tender age aboard a 76′ Alden schooner, gaff rigged of course (at least initially), this image can bring back the smells of hemp and tar, and the creak of the gaffs working in a seaway. 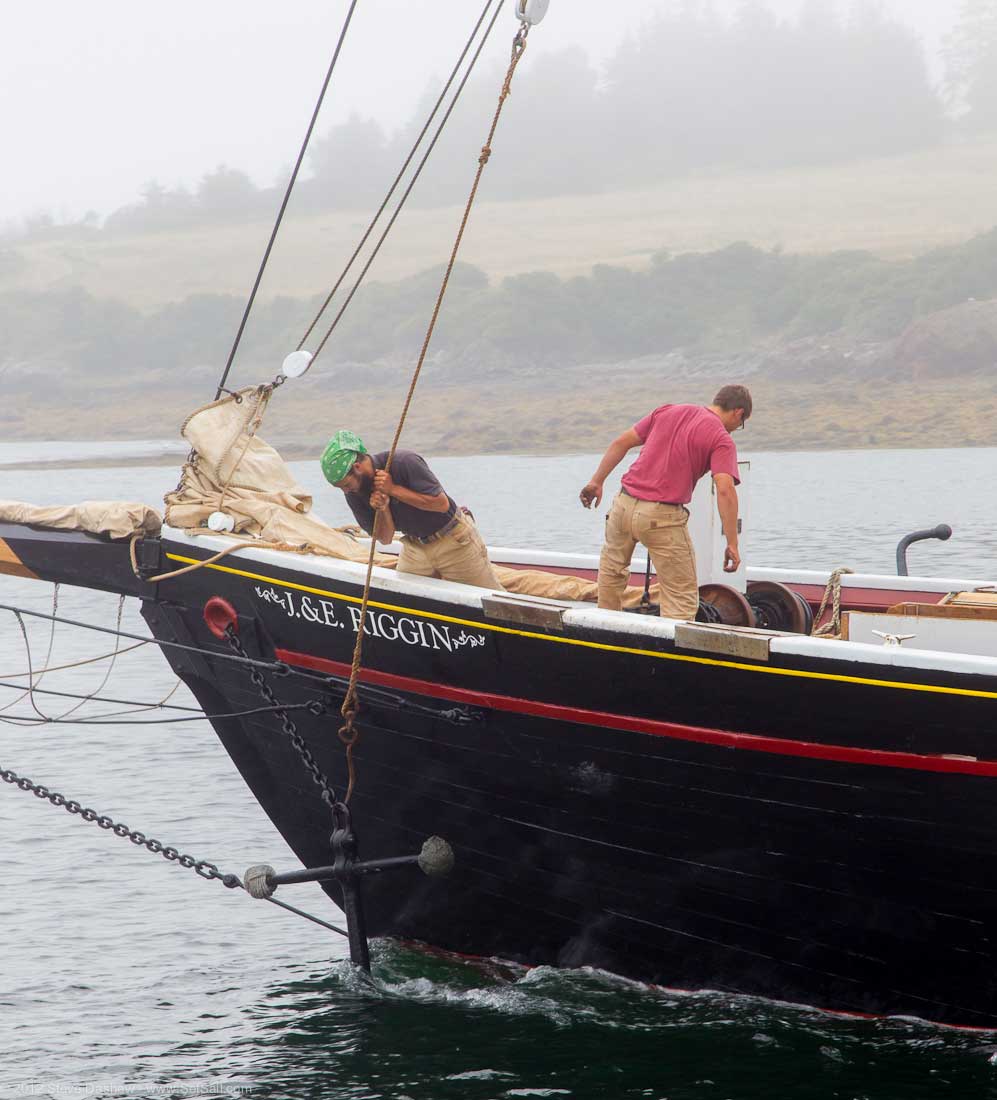 The anchor dance, as we used to refer to it, looks and sounds romantic. But truth be told, having been on the cranking end of that big winch, we prefer self-stowing anchors that come home with the push of a button. 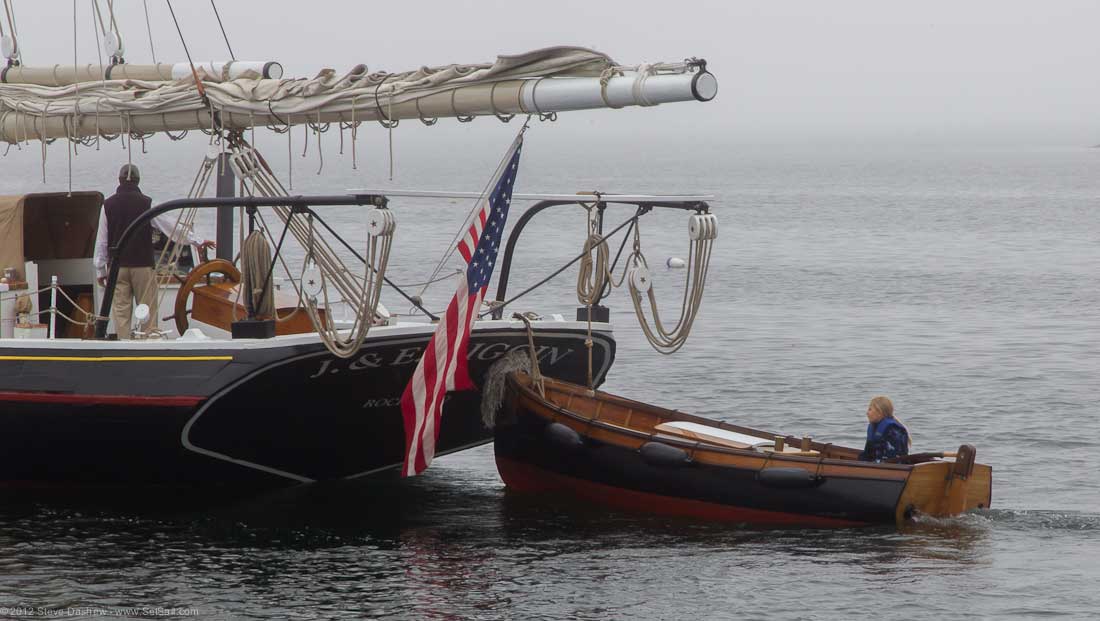 We’ve been here as well, albeit as the result of a balky drive line or engine, rather than through lack thereof. Surprising too how little power is required to move a large sailing yacht. The 50 foot Intermezzo would cruise nicely at three to four knots with a four HP outboard on the dink tied alongside. Of course it took a while to stop. 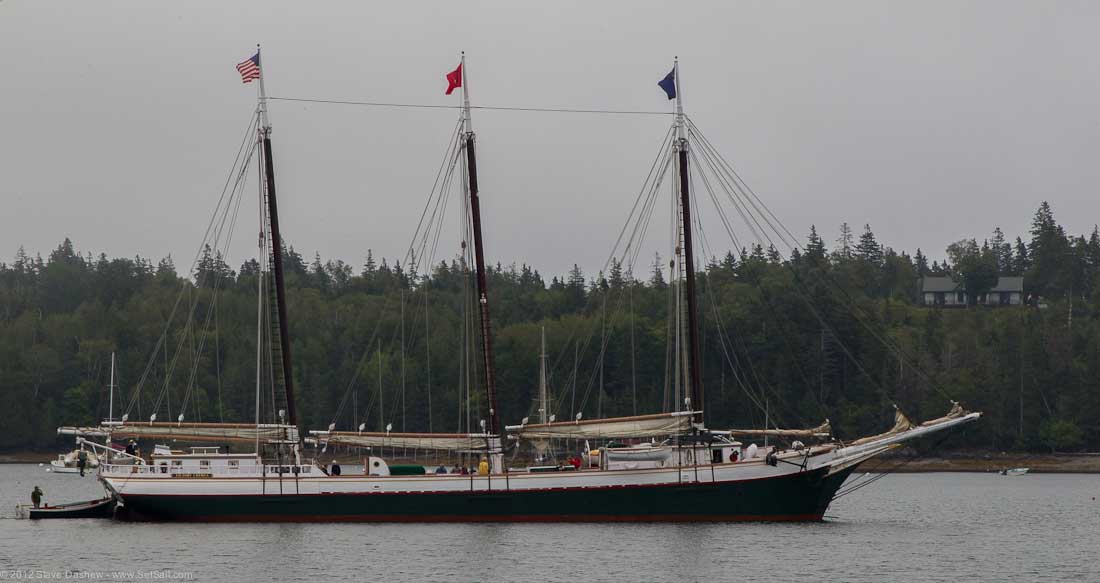 If the schooner rig with two spars is good, how about a third? 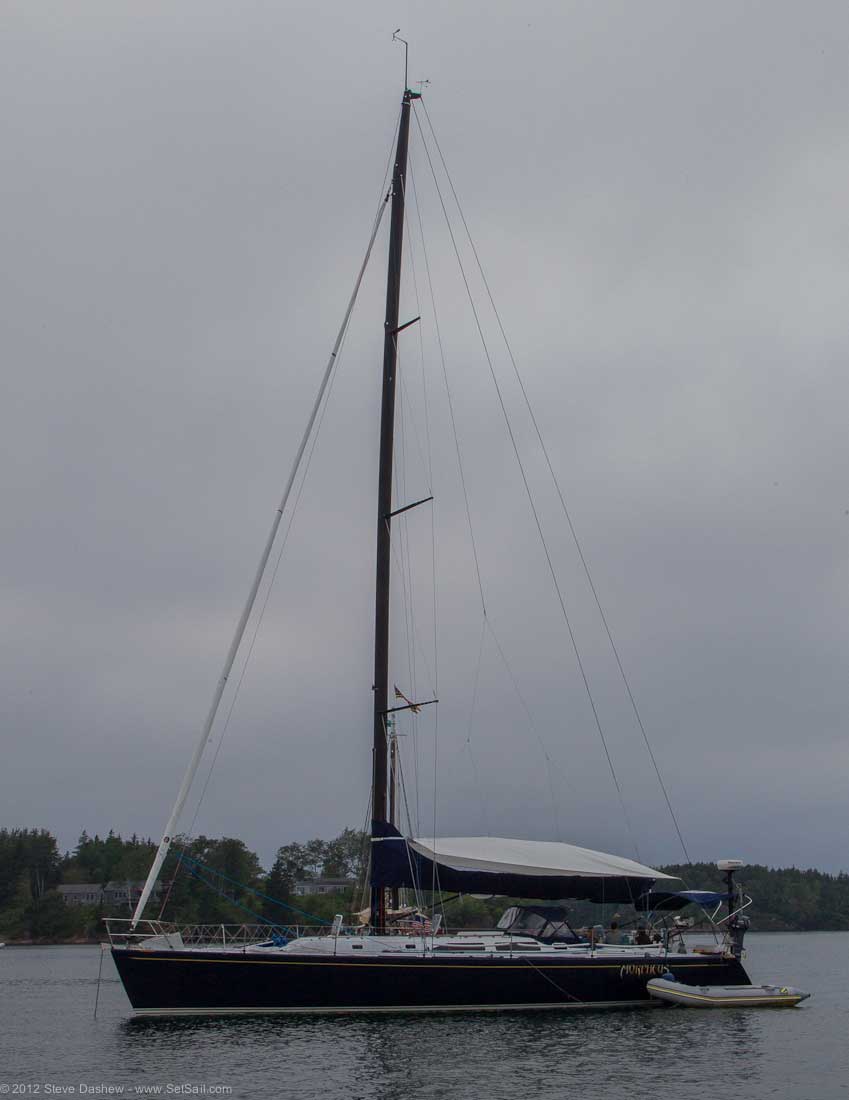 There seem to be a lot of black yachts these days. Nice looking here, but perhaps a touch impractical in warmer climates. Note the awning, in Maine no less. Isn’t global warming wonderful? 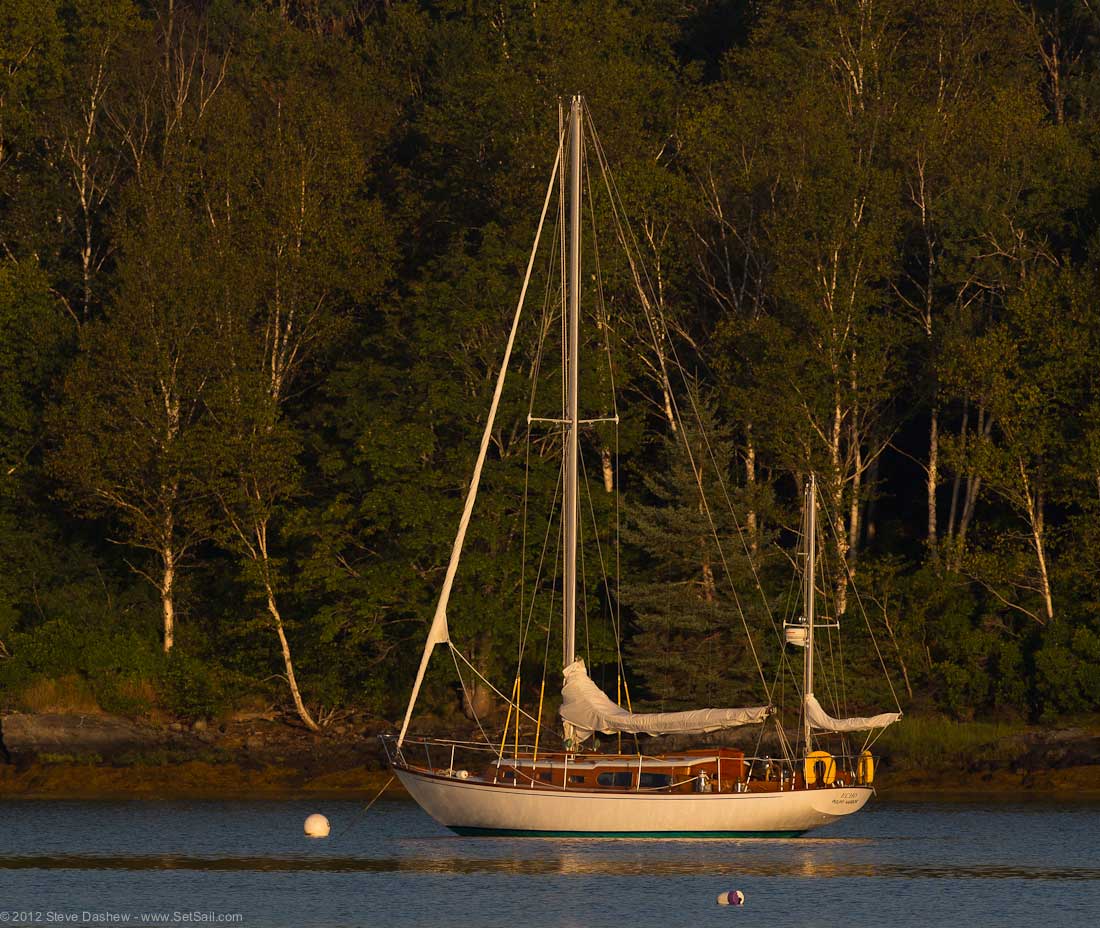 So far optimal light for photography has been lacking. Not more than ten minutes this week in total. The silver lining in this is that it makes it easier to keep our noses to the grindstones, which otherwise might be difficult. 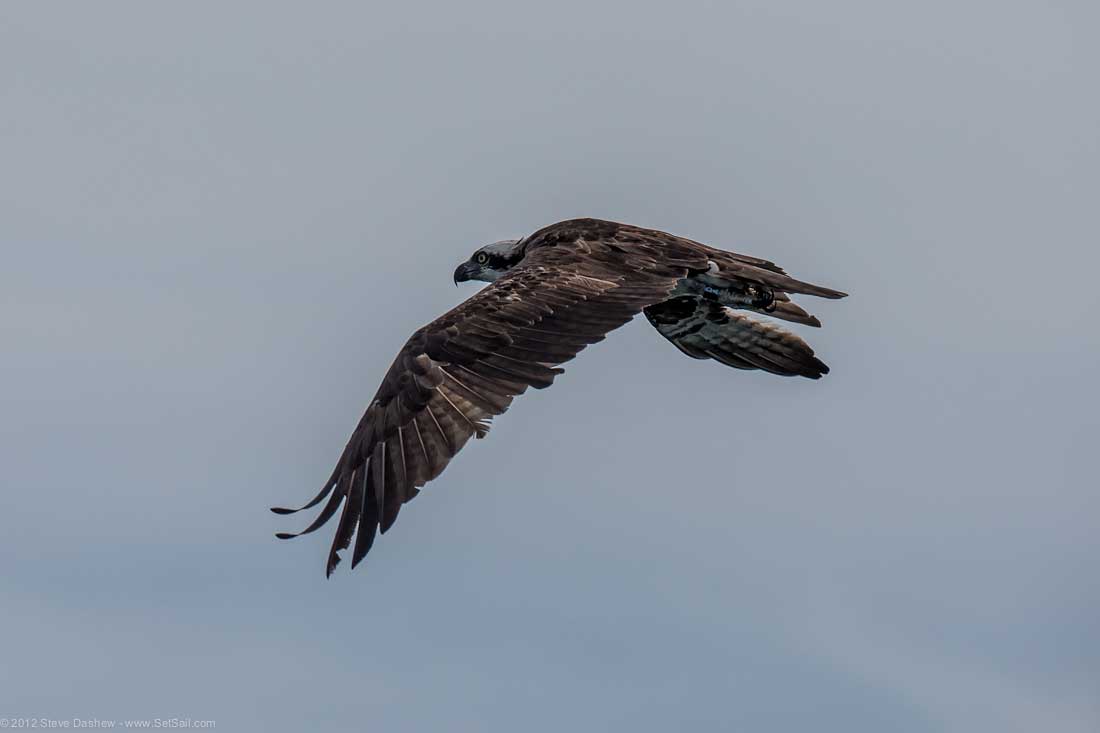 We mentioned the Canon 1Dx we’re learning about. Where the other photos were shot in less than perfect light, this and the following were in positively horrible, harsh, zero contrast conditions. 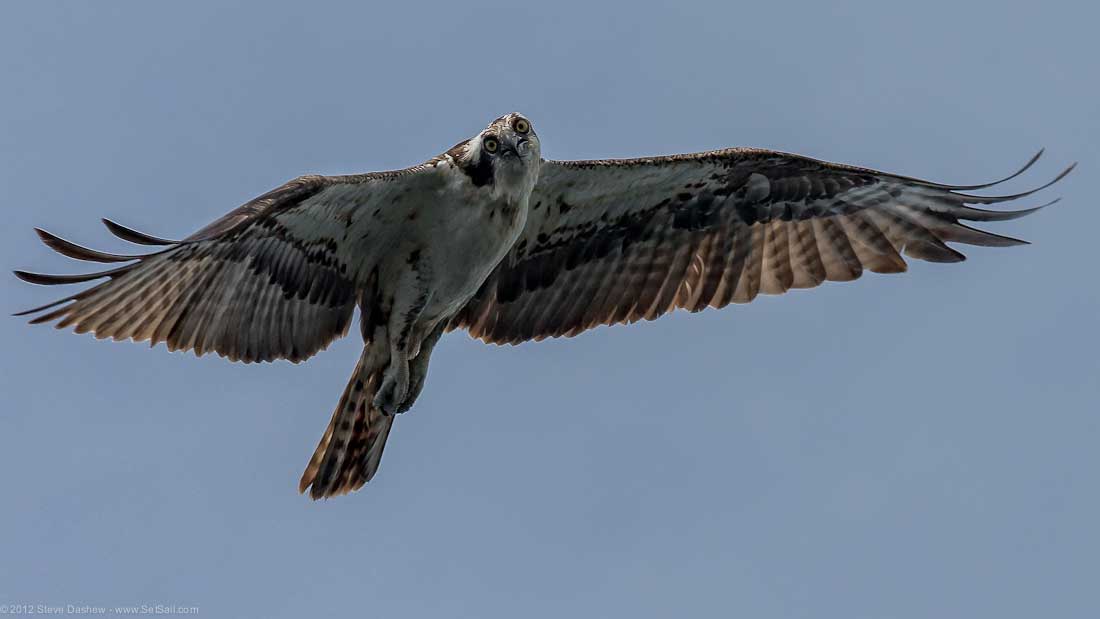 We would not normally even bother shooting, but being in test mode were trying different combinations of exposure compensation and ISO (film speed). We are frankly amazed and delighted by the potential these exhibit. Now we need to find some lovely light and experience what we expect to be a new quality standard.

Post script: It is Saturday, early evening, and we’ve forced ourselves to take a walk ashore. 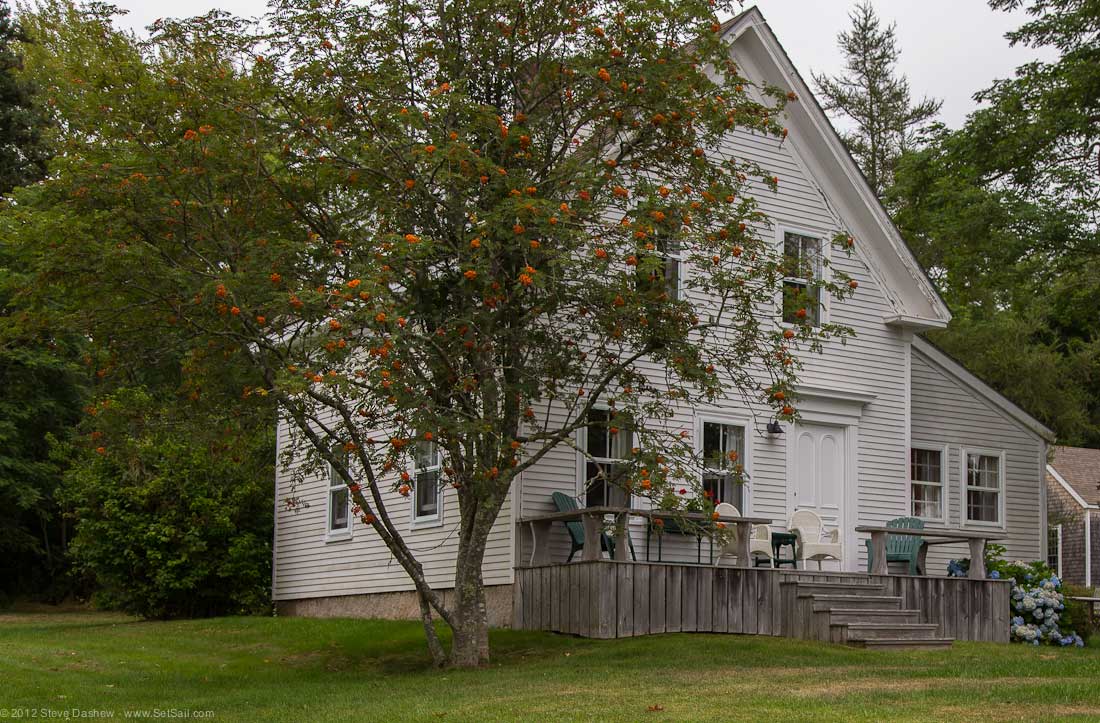 The few drivers wave as they past obvious interlopers, the occasional householder smiles and engages in a bit of polite discourse, and we learn from a fisherman of a festival in a nearby town, complete with five hours of live music.

There’s a bit of color in the otherwise dull light. 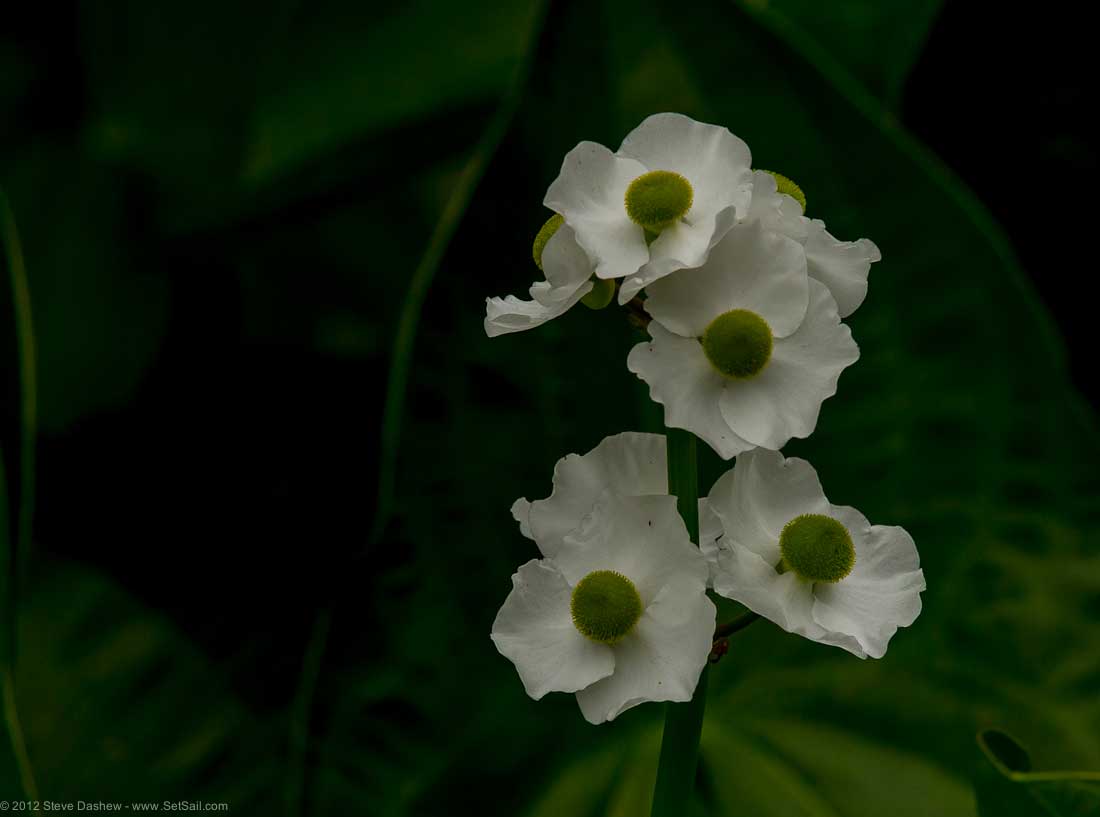 And here and there a lovely flower to entice the foot weary traveler onward. 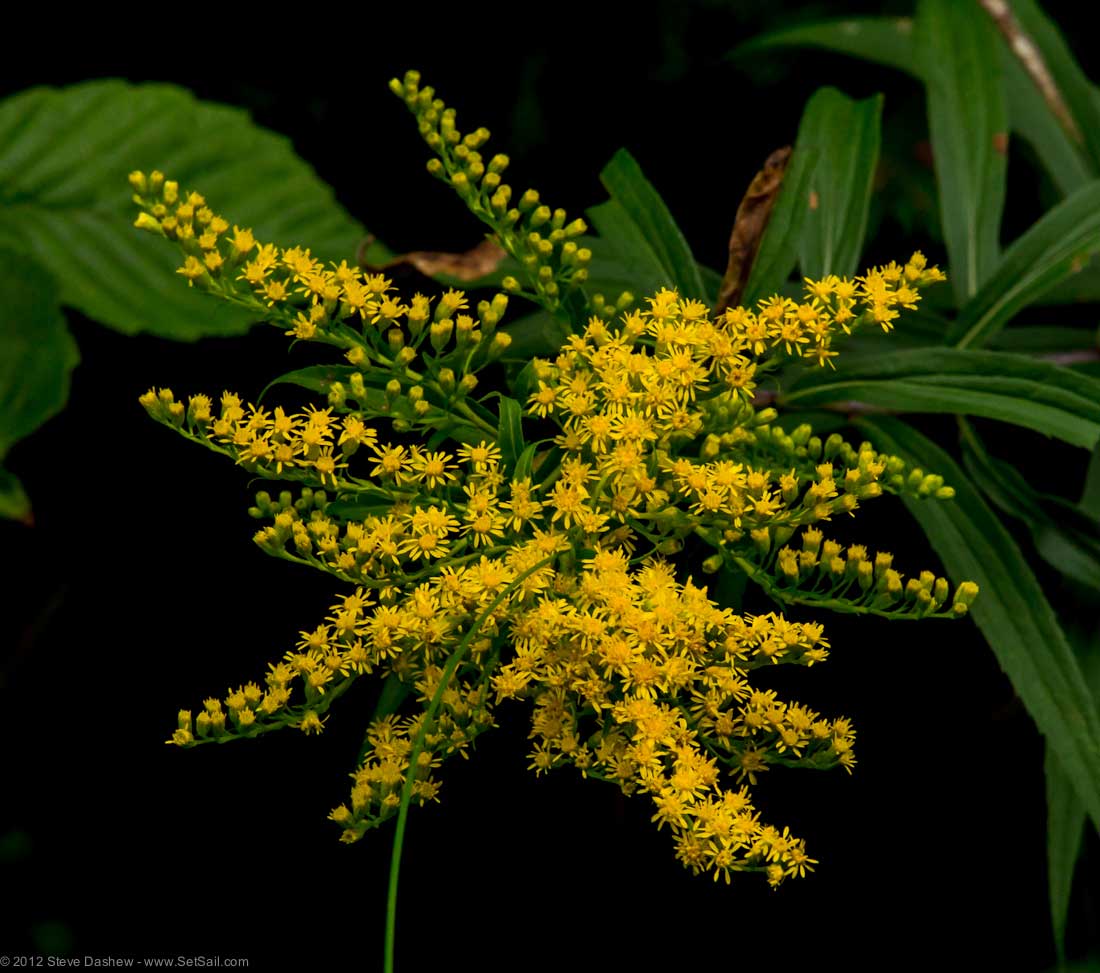 We may bestir ourselves to partake in the festival, or at least listen to a bit of music. If this lofty goal is attained, your faithful correspondents shall revert in due course.

This entry was posted on Saturday, August 11th, 2012 at 8:18 pm and is filed under Dashew Logs. Both comments and pings are currently closed.


8 Responses to “Pulpit Harbor – It Weaves A Web”